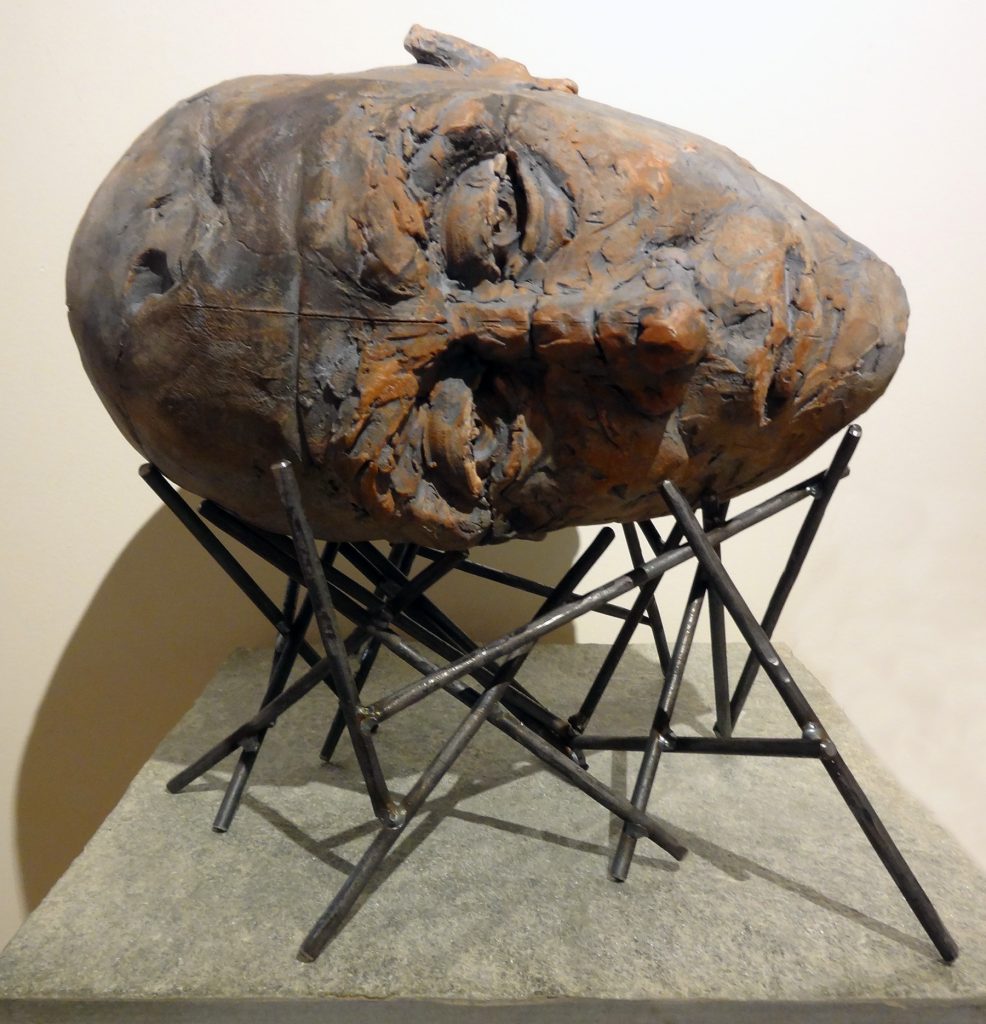 For all intents and purposes, statuary was invented in ancient Egypt. These earliest figures, meant to provide a home for the soul in case the body was lost after death, took the cautious form of virtually indestructible cubes of stone. The Greeks took over the idea and, using malleable bronze, liberated the figure to produce idealized human forms, including individual portraits. Alexander the Great took this art to India, where his hagiography inspired images of local gods, saints, and of course, the Buddha. Meanwhile, back in Egypt, a second school of statuary grew up, featuring scale models of pharaoh’s army, his servants, and even pharaoh himself, meant to accompany him to the afterlife. Utterly charming, thousands of years later they still march and stand guard, grind grain, and ride the back of a cosmic leopard through the night, ready to continue in their roles through eternity.

In modern art, we no longer speak of statues. In what’s now called sculpture, we have a less purely representational kind of object, one that speaks a more elaborate language. Portraits and scale models are still part of it, but any carved, molded, or assembled object, whether it stands on its own or hangs on a wall, can qualify so long as it performs an artistic function. A representative sampling of today’s sculpture, if a necessarily incomplete picture of its range, can be seen this month at A Gallery. Ten of their most popular artists have brought 54 new works, which stand among the gallery’s previous offerings.

One artist here could almost represent the range of modern sculpture singlehandedly. Brian Christensen may be Utah’s foremost sculptor, working in many materials to produce work in most of the known genres. He was the first artist I wrote about for 15 Bytes, shortly after my arrival in Utah, and it seems everyone who has ever written for this magazine has had a chance to cover him. I’ve never forgotten the way he grafted the frame of a revolver to a cast bronze hand, presenting the pointing finger as a deadly weapon. Much later, he showed a lighthouse the size of a human body, thereby disclosing a previously unexplored metaphor that may help explain the popularity of these universal structures. Recently, here and in a collaboration with Frank McEntire that’s just left the Bountiful-Davis Art Center, he’s turned his attention to ubiquitous structural supports, like the billboard he fabricated with McEntire and the scaffolds that cradle the rough-hewn heads in “Layers of Time,” “Shard Head,” and “Reconstructing a Dream.” Two huge, painted ceramic containers, “Lotion” and “Repurposed Jug,” celebrate familiar objects while questioning some cultural values. Also present here are “3 Frozen Bladders” and “Birth of Venus,” a pair of blown-glass ensembles that revisit the eloquence of pure form that has all-but-disappeared from contemporary glass.

Of course A Gallery has always shown glass art (which is not the same as art glass). Seth Fairweather presents a sampler of sorts: some recent developments in blown- and kiln-formed glass. Glass objects divide themselves naturally into two camps: opaque objects, which absorb and diffuse light to produce vivid colors that benefit from interior luminousness, and clear or transparent objects, which may present an illusion, often-dramatic, of interior space. “Blue with Red Chevron,” which looks like a vase but is a sculpture, belongs in the former camp, as do the “Ascetic” series, which place translucent busts atop opaque rods. Here light plays a traditional role, representing consciousness or spirituality after a long ascent through darkness. Among those seeming to harbor inner space, “Jellyfish Disk” and “Angled Reflection-Dream” are more abstract, while “Belief is a Doorway” presents a more specific, if ambiguous scene. The latter two also play with the difference between the object’s skin seen from outside and the same surface seen from within. 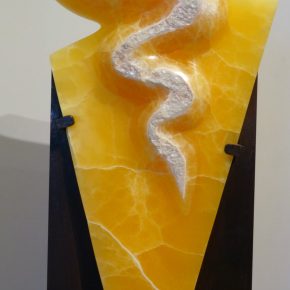 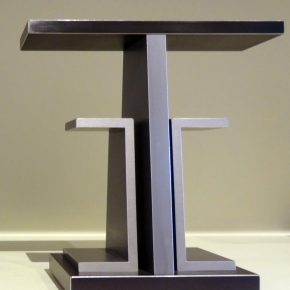 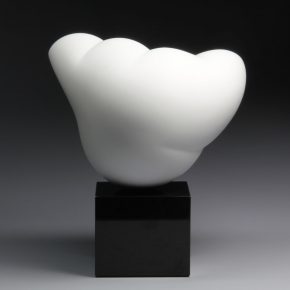 Dahrl Thomson doesn’t show any glass here, but “Aflame,” which she carved from honeycomb calcite, exploits light internally as well as relying on it to model the work’s exterior. Although honeycomb calcite is believed to be unique to Utah, similar materials have been used for glazing since Roman times. While Thomson’s use of the keystone shape in “Aflame” produces an effective transition from plinth to cauldron, her bravura use of the white layer that forms the calligraphic flame lends it an Old Testament feel that enlarges its references.

Ryoichi Suzuki demonstrates finesse on a level few of his contemporaries attempt. His forms conjure the organic imagination of Henry Moore; his repertoire of materials recalls Constantin Brâncusi; his surfaces bear comparison with Isamu Noguchi. Although he’s represented here by more older works than new, that’s not a loss when those earlier works still have so much to offer. In “Cloud is XV,” sparkling white marble captures “cloud” the way a cloud captures sunlight. “Torso” uses the grain of a block of elm wood to suggest contour lines, making his elegant abstraction a relief map of the body. Such unpredictable gifts should eliminate any suspicion of reactionary purpose, but in case any remain, there’s “Decorated Torso,” a collaborative piece featuring a double helix of graphic human figures in spidery, black ink, backed by gold bars that dematerialize the translucent white granite. It’s a piece that belongs in a museum.

In the few years since he retired from Weber State, Jim Jacobs has made himself a well-known and much-admired presence on the gallery scene.  Jacobs joins together natural and human-made objects, and if how the parts are joined together is, as seems likely, the most often-asked aesthetic question in modern sculpture, Jacobs has always preferred to explore what can be grafted, rather than how. His joins generally disappear into the drama of the juxtaposition, though it could be argued that their subtlety makes his carpenter’s joints stand out. In his best-known works, trees become furniture through grafting: a process that owes as much to conceptual work as it does to exquisite craftsmanship. The perceptual barrier of time dissolves in these rather magisterial pieces, allowing viewers to witness the transformation of nature into artifice, then trace it back again, with Jacobs’ carpentry functioning like a film splice. In “Absalom (Chennai)”—an entire cherry branch with 37 hair grafts—and several works invoking “Mika’s Ponytail,” the ruse is more subtle, but also more disorienting: instead of proper leaves, vegetable branches produce human hair. In “Scribe,” the shadow on the wall encounters the pencil that might have drawn it. Perhaps Jacobs’ project all along has been to capture change, in all its forms, within a single image: at once both a snapshot of the instant and a landscape of infinite time.

Beneath Jacobs’ “Crest,” a lofty spray of apple branches that curve up from a maple chair into his signature parabolas, Kraig Varner’s “Sky Goddess” seems to float ambivalently, standing on a rocky base, arms upthrust, but with her hair trailing up as if she were falling. Like “Sun Goddess,” “Emergence,” and an older piece, “Mystique,” she’s graphically nude. Perhaps the real mystery, in the age of #MeToo and the Gorilla Girls, is where to put art that discomforts as many viewers as Robert E. Lee might. 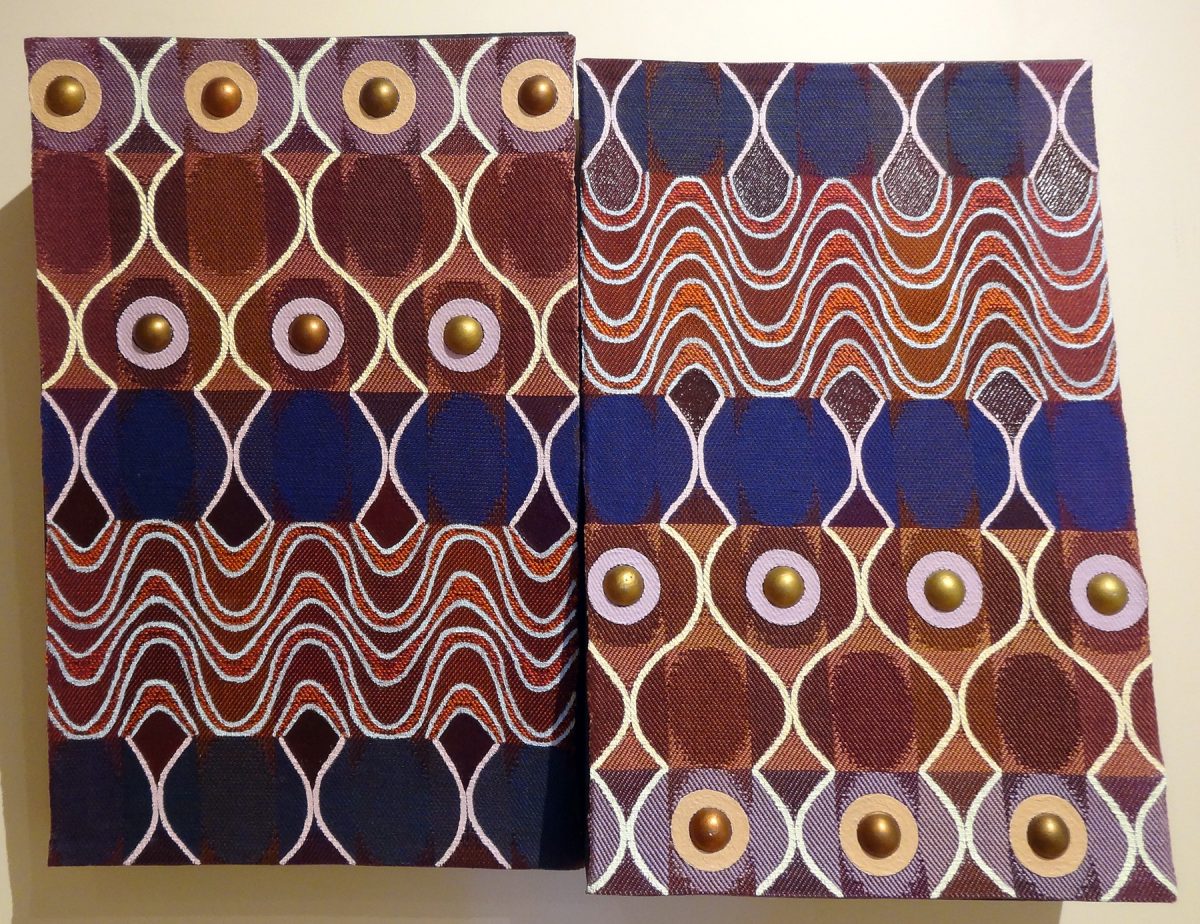 The most novel material used in this exhibition may be John Hess’s woven wool, but that could only be true in the European/American, masculine tradition. The Incas knitted three-dimensional human and animal figures that presumably went with their quipus — knotted cords that served in place of writing for keeping tallies and sending messages. Women have poured their creativity into domestic activities, with textiles among the foremost. Hess uses double and triple weaves to produce two different sides, each with high contrast between areas of brilliant color. He invokes the familiar and sensuous textures of oil paint on canvas by painting over some of his weaves, and folds his fabrics around hexagonal sections or into zig-zags that give them tremendous energy—both in sculptural space and visual complexity. While some emerge from the walls like bas-reliefs, others stand up, alone or in groups. Samplers and 20th-century geometric abstractions come to mind, though “Six Trees and a Landscape ” adds a bit of representation. Aside from the abundant pleasures of color and texture, the titles tend to humorous invention: “Undularium” rises and falls in sinuous fashion, “Orbitron” derives a sci-fi feel from attached metal disks, and “Plato’s Garden,” a collaboration with painter Madelon Juliano, invites the viewer to imagine strolling through a garden labyrinth.

Darl Thomas’s severe ensembles—all straight lines and flat, stacked planes—achieve an architectonic dimension that belongs to the most extreme Modern architecture. They also demonstrate basic aesthetic principles. The towering “Offset Planes” demonstrates balance, and gives away the real secret of Frank Lloyd Wright’s “Falling Water.” “Mid-Century” shows how empty volumes can work just like solid forms. “Three Planes” displays Cartesian logic, while “The Gap” proves that a small absence can equal a huge presence. If the pleasure of music really comes from unconscious counting, these do something similar in three, rather than two dimensions. It’s not for everyone, but then what is?

Ed Pogue’s columns, which he compares to totem poles, suggest what David Smith’s early Surrealist works might look like if brought up to date thematically and technically. Forcefully—and forcibly—reorienting viewers with his use of frames and defiance of gravity, he arranges eloquent found objects (“Bone Column” and “Mechanical Column”) and landscape features (“Delicate Column” and “Glenwood Canyon Column”), each cast in meticulous detail before being scrambled together in unfamiliar ways. Pogue argues that we associate totem poles, like obelisks and sundial gnomons, with the passing of time, and with the past. Not every sculpture invites contemplation: some, like those set high up on poles around Salt Lake City, had better be instantly appreciable. Pogue’s are meant to remain awhile in the eye and mind.

What made their statues so appealing to the Greeks must have been art’s role in the classical culture’s rich narrative tradition. They projected their creation myths among the stars, but popular stories from mythology and epic poetry also decorated everyday ceramics, temples, public buildings, and ceremonial spaces. Statuary and pottery were like the Greeks’ television, and reading the surviving fragments is more than a little like watching TV with the sound off. Since sculpture no longer fulfills such an essential function for us, it’s become more cerebral, with less emotional content. If only for this reason, Anne Gregerson, whose polychromed ceramics not only resemble Greek statuary, but come closest to doing for us what sculpture did for the Greeks, stands apart for her intensely personal engagement. Some viewers may be too embarrassed to appreciate “A Dream of Trees,” in which the last thing noticed, after all else has been taken into account—the posture, the expression, the dress—will be the pinecone, finding which brought it all about. By separating the significant roles of two- and three-dimensional elements, the sculptor is able to create an optical illusion in “Aspen,” where the eye first sees a head and arms, then three trees. In “Beach Harvest,” wind-tousled hair recalls both Botticelli’s Venus and the waves into which the figure gazes, while “At Ease in Her Skin” removes her painted clothing, but leaves her dressed in clay. It’s often observed that an artist rarely draws a likeness that doesn’t resemble herself, but here the art is by turns autobiography, Everywoman, and everyone.

Sculpture, A Gallery, Salt Lake City, through Sept. 29, with most works available on the gallery floor through October.