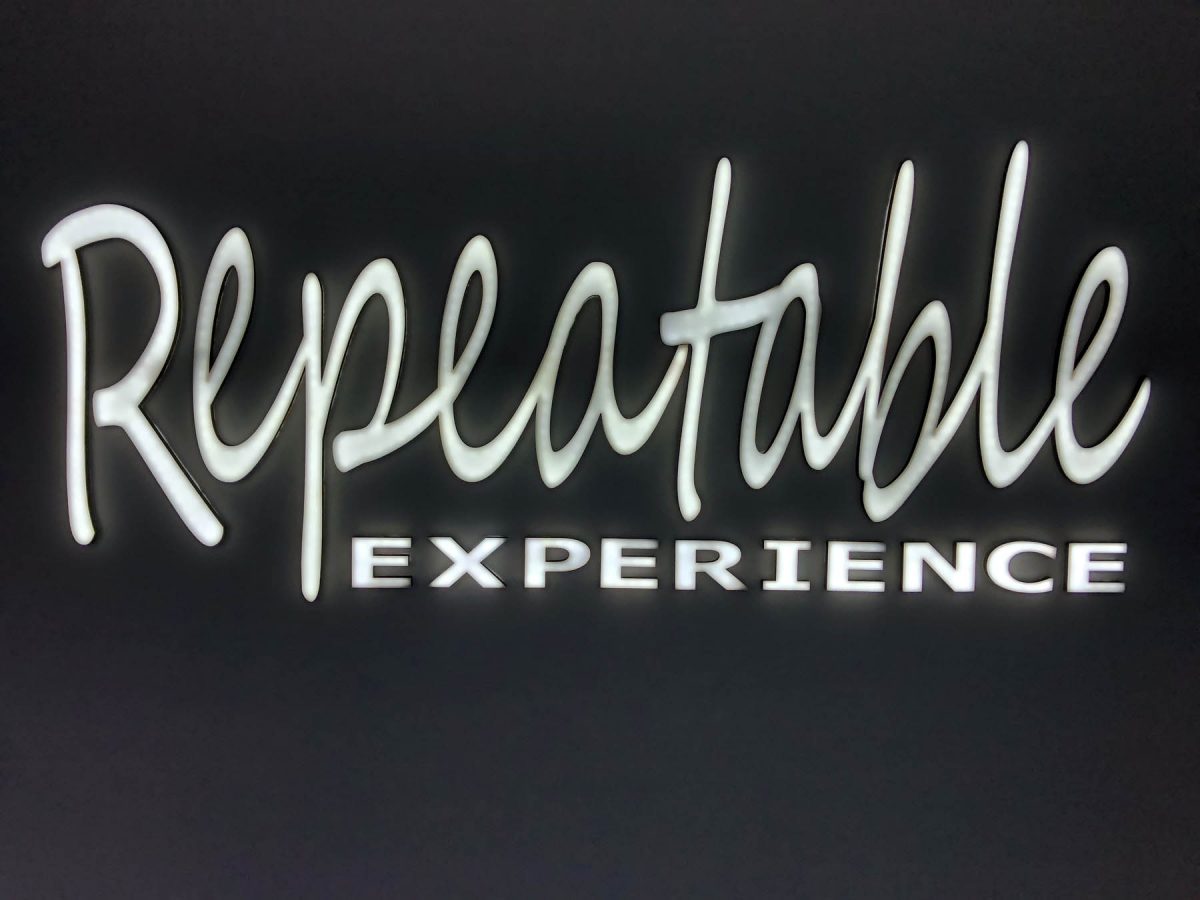 When confronted by a broadly-brushed lampoon such as Kelsey Harrison’s New Luxury Art Show in Downtown Salt Lake City, it’s tempting to sustain the illusion, play along, which in this case would be writing an ironic review: one that used the same hyperbolic, vacant language, touched on the same shopworn clichés, and shared the same wink-wink connivance with the public. This is, after all, a show that at first glance exists only to illustrate its own press release. But therein lie risks. There is uncertainty whether we are in the universe of Stephen Colbert, whose mock-conservative character, now discarded, confounded half of his audience into thinking it was genuine, and on their side. Or is it possible to have crossed over into some inverse-Colbert universe, where the satire perversely means exactly what it says? What if apparent censure in reality is meant to praise?

Only recently, social scientists have shown statistically that satires, such as those made famous over the centuries, or seen more recently on comedy news programming from Saturday Night Live to the afore-referenced Colbert Report, fade quickly from the mind and, in any case, are rarely able to change anyone’s mind. 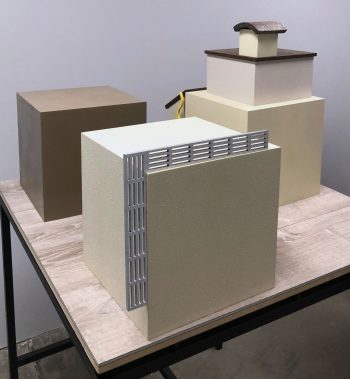 And another thing. Harrison has researched her topic thoroughly, then honed her presentation as she carried this small, pithy show from venue to venue. It would be a shame if an error in its conception or execution led her audience to trivialize, or even overlook, her critique of the socioeconomic flaws rife in today’s corporate-dominated America. These seemingly trivial observations—such as the fast-disappearing distinctions between residential, commercial, and ecclesiastic styles of architecture—expose a collective inability to reason, feel, or even perceive coherently. That the artist uses seeming child’s play, with custom-made building blocks, to make her point means that viewers are left to their own devices. They must stay alert and vigilant. It’s a tall order in a time of manifold distractions that offers, as a local, multiproduct corporation has it, “Luxury at an affordable price.” It’s also a lesson that must be learned, and everyone deserves a turn at teaching it.

Take, for example, the theme expressed by an illuminated sign so large that it bifurcates the gallery space, Balkanizing its main room into isolated compartments that cannot communicate directly with each other. One side reads, “Repeatable Experience,” a reference to the goal of those who profit the most from the way this culture malfunctions. In the modern world, one of increasingly disappointing yet inescapable experiences, little things that are dependable, that can be relied upon not to fail, become like steppingstones over the swamp of indistinguishable mediocrity. Whether it’s the same vacation every year for those who can afford it, or the same fast-food meal every night for those who can’t, repeatable experiences, the ones that bring paying customers back, are what every would-be monopolist desperately wants to provide. Nor is there anything trivial about it: every time the failed real-estate developer turned reality-TV star repeated his eagerly awaited tag line, “You’re fired!” he further cemented the loyalty of millions of life’s self-declared losers, who felt a squirt of power in their veins while saying it with him. In a country inexplicably short of authentic heroes, their loyalty to that memory will be all-but indestructible. 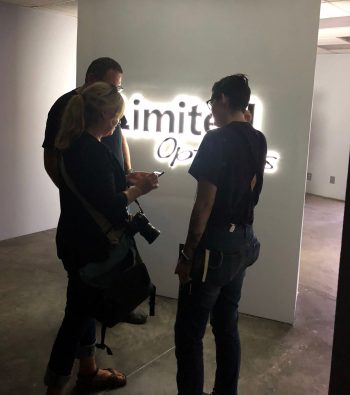 In case any doubt remains, the other side of the (symbolic?) wall reads “Limited Options,” surely the motive, but also the price paid, for those repeatable experiences. If you can’t have what you want, then you must want what you can have. What Kelsey Harrison has done is to dress this sad state of affairs up in neon lights and empty but seductive promises. “Let them eat cake” becomes “let them reread the brochure.” The best evidence is right at hand: “Our multi-room gallery floor plan . . . ” means if we can’t afford to give you more space, we can subdivide your share into ever-smaller rooms. And “. . . meticulously managed and curated with your taste in mind,” urges the consumer to identify with the one detail present that first caught the eye: the luxury light fixtures in a pedestrian home, the signature dessert that follows the mundane meal, or the fancy office where deadening work is performed.

Never enough money to deliver genuine quality, but always sufficient means to spend studying, if only to overcome, the buyer’s resistance.

So, what business does something I’m making sound like a sociology text have in an art gallery? One good possibility lies in the resistance most creative persons display to being corralled into such a narrow and depressing lifestyle. It’s not so much preaching to the choir as it is encouraging those who choose not to trade their working hours for a pittance of what the media tells them they need, or what the neighbors have traded their freedom for. It’s no exaggeration to say that, as the greedy few take more and more of everything, there’s a war on for the quality of life out here. Art isn’t the only weapon in this fight, but as an emotional, even spiritual source of motive, it generally comes first. 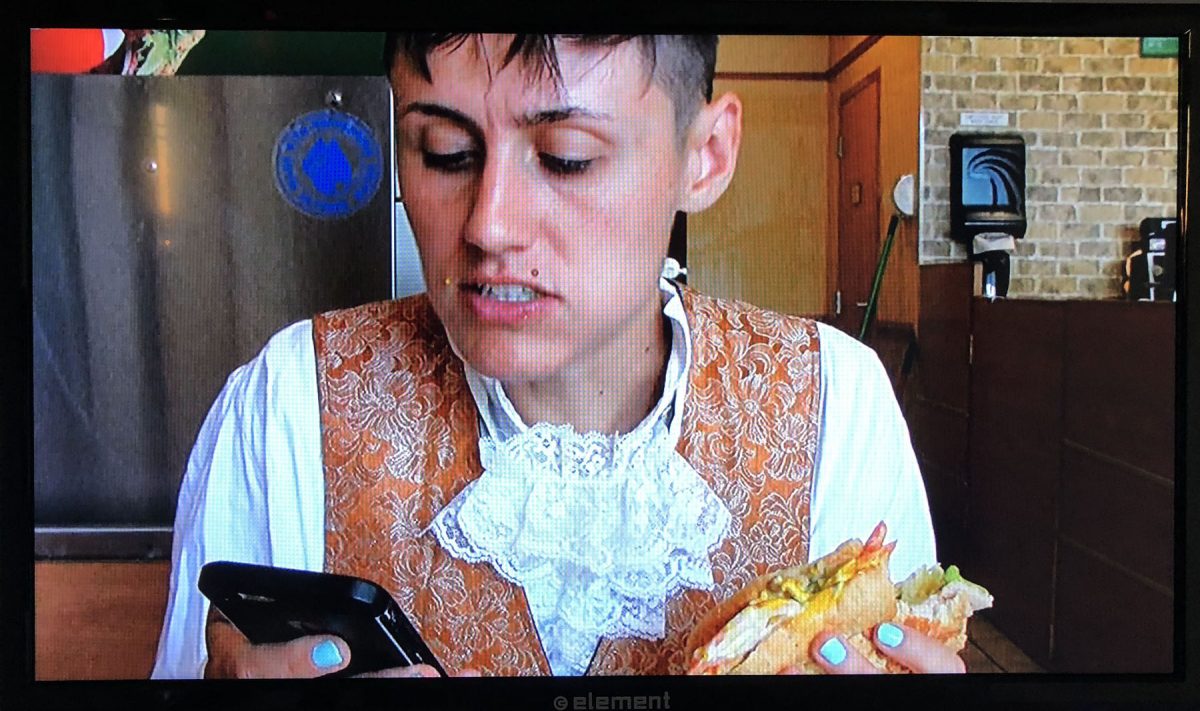