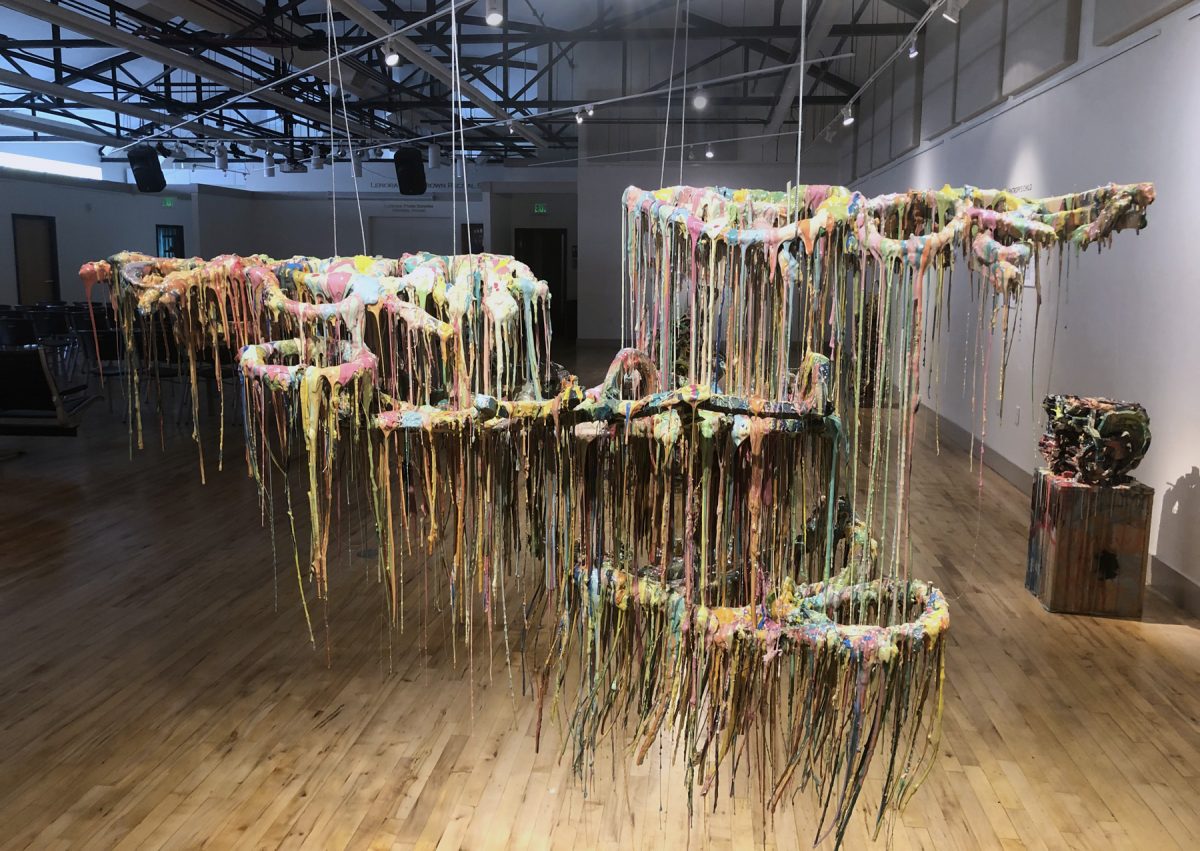 Brian Boulton is a man with the courage of his convictions. By this, I mean that, having chosen to work in either reclaimed or man-made materials and to produce non-representational sculpture, he’s resisted the temptation to slip in the occasional pretty bauble or a helpful similarity to some pre-existing, preferably iconic object. His sculptures come into being from the activity of his hands, overseen by his eyes, and their interest comes from such attributes as their original, convincing shapes and strong colors.

His exhibition’s title, Entropy’s Child, reflects the original source of the eight objects it includes. Entropy is in general a measure of the disorder in a system, so when something finalized is dropped, say, and shattered, the increase in its entropy is as good as infinite. We’re told that a ceramic object was dropped accidentally, producing something about as organized as space dust, and Boulton then put the pieces back together in some order, using urethane, a chemical known for its ability to fight cancer — which has a certain metaphorical connection to entropy. He then when on to drip colorful urethane all over his reassembled fragments, taking care as abstract painters do to rotate his “canvas” periodically so that the drips went in various directions. This freed the work from an excess of influence by gravity. The results don’t represent anything, beyond the history of their making, but they do possess bright colors and a strong sense of frozen motion. Anyone who thinks they’re no more interesting than their photographs should go see them in person: the long, lumpy strands that began as drips look very different as they project through the air towards the viewer’s eye, while the open, inner spaces, surrounded by elaborate combinations of scribbles frozen in space, draw the mind inwards in search of a pattern or narrative.

Two of the sculptures, numbers 1 and 8, are hung flat on the walls at opposite ends of the gallery, the other six either standing or hanging between them. Thus there is an implied narrative, in which numbers 2 through 7, emerging from one of the ancient, chaotic seas, parade like animated dinosaurs, and eventually return whence they came. Those flat pieces are made of countless spills and splashes, each a different color and pour of urethane. Their largely circular, technicolor, lava-like character is broken up by thin, busy lines that appear to have been branches or vines from plants. 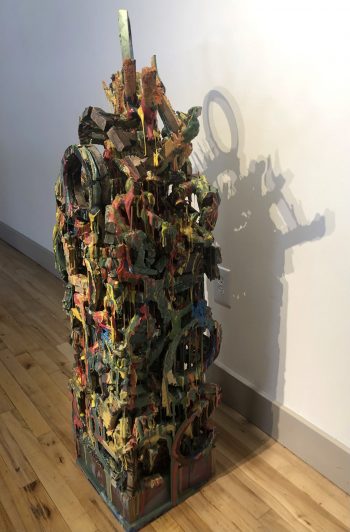 Each of the six pieces between the walls has its own distinct character. “Number 2” consists of vertical risers that must have begun as drips before being inverted. They rise from two sets of circles that spiral up beneath them. Rising as they do, they communicate buoyancy or propulsion. “Number 3” presents a nearly solid rectangular block, square in section and dense with ceramic bits that appear to be part of a machine that has become encrusted with alien life forms. “Number 4” still shows a lot of heavy components, but these are more separated and imply tube-like passageways. “Number 5” suggests something like an engine, with horizontal drips that look like a cartoonist’s speed lines, suggesting it has been and might still be in motion. “Number 6” dominates the suite and the room, comprised as it is of four large, horizontal, compound loops from which huge numbers of colored strings dangle like so much Spanish Moss hanging from a swamp-dwelling tree. And “Number 7,” the last one before the wall swallows them, reverts to the basic ceramic forms, divested of urethane and looking burned out. This journey, a mere chapter in the saga of entropy, is complete. 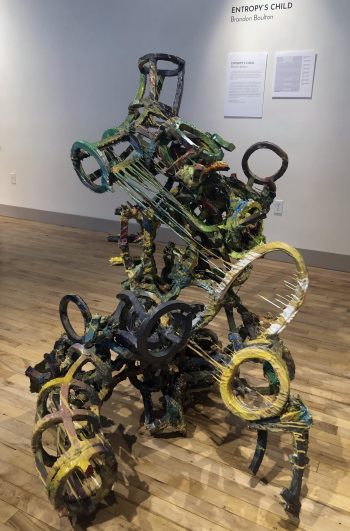 Brian Boulton divides his time between teaching as an adjunct at BYU and working with disabled persons. That makes him a saint in my book, and Entropy’s Child is a room full of compound beauty to walk amidst. It’s also an adventure to think about, as I’ve tried to show. Every one of the five shows at the Bountiful Davis Art Center this month is worth the drive, but you get them all for one trip and admission is free. Not only that, but front desk docent Scott Durant will greet you warmly and share his enthusiasm for the art — or leave you in peace if that’s your preference. You can’t beat that this side of Glasgow.