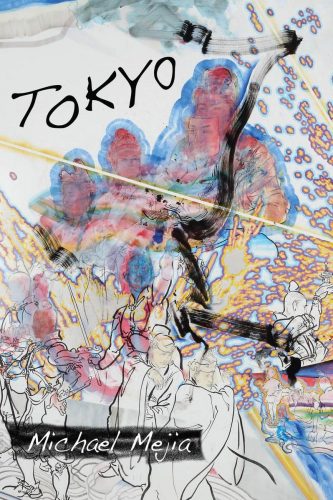 If you’ve never been to Tokyo, or if you’ve never wanted to (but maybe you’ve wanted to want to), then Michael Mejia’s mimesis of the place is a small rapture to get you started. It’s a crucial book (and I mean crucial literally) that not only defamiliarizes the self but even the imagination of the self, which is to say he causes us to swell into something larger, something eco-systemic in identity, something more complicated than flesh and blood and water.

Titled Tokyo, Mejia’s second book of fiction following his debut novel Forgetfulness, is absurd, and pleasantly so. It seems to have the same discursive nature and overwhelming anxieties as David Foster Wallace often expressed: existential concerns on the personal level and within and for the zeitgeist, questions about the responsibility of being, examinations of the devil in the economic/environmental/endemic/epidemic details of society and general life. The book begins with a report on “The Tuna Affair,” which turns out to be more exciting and wondrous than the initial bureaucratic overtones might suggest. In fact, Tokyo becomes something much more than an overwrought deconstruction of contemporary issues, but actually has some small teeth that make some real conclusions about what can be done.

Mejia doesn’t just conceive of the self as many, but sees it as also invariably beyond the body, both in an imagined and in a very real sense. The book spends much of its time on the relationships between lovers, both strange and estranged. It is a surrealist exploration of the individual’s economic portion of our imminent global catastrophes, and does so in fine-tuned and ironic bureaucratic detail. “To imagine home as a body,” says the narrator in the middle of a section where a girl in white galoshes is jumping in puddles mixed with the blood of tuna being gutted for the market, and all I can think of is why I don’t think of my body when I say the word home, and how I should, and how the book suggests that the body is more than just our flesh, and if the body is more than just flesh, but also form, environment, context, history, relations, economics, then we’ve only just begun, like the girl in galoshes, to understand ourselves as selves.

Tokyo is divided into three parts: a surrealist fiction, a poetic pillow book, and a loose set of background narratives. It all accumulates into a rather full-text experience, providing for all the possible pleasures of literature. The book rewards attention and also requires attention, making it hard to recommend as relaxing prose, but also difficult to desire as poetry. Not only is much of it subjectively dense, but most of it is initially formally dense, much like traveling to another country and experiencing a new culture; it takes a few pages to finally get a full sense for what you’ve gotten yourself into.

Each section, although formally disparate, comes together in a way you would not have imagined it would or could. The sinews of the sections remain loose where you would least expect: loose with characters and plot. Instead, the book comes together through its shared locale and serendipitous intersections. The same market appears in different sections but from different perspectives, and even though each perspective is particular they seem to share the same wonder, causing me to wonder at myself: am I really isolated from others by my imagination or can it be that our imagination lends to my invisible inseparability from the rest of humanity? To put it simply, the book is tight, somehow both tight and wide.

In Tokyo, Mejia points toward a sort of ecological responsibility, if not a post-humanist perspective, which I had hoped for as certain elements wrapped themselves up, and there are elements of Trans-Pacificism being suggested (an exciting development and advocation). The book as a whole argues for a wider sense of self. And not one inflated by ego or a sense of superiority (though the internal characters have their moments).

No, the book means to suggest a sort of self that is sometimes spread so thin it feels pulled to drama, pulled into the eyes and mouths of others, pulled into all sorts of affairs (with secretaries or “Tuna Affairs” or erotic conversations). If there is a word that disagrees with ennui, then Tokyo expresses just that: a sense of being overwhelmed and excited about the details and detours of thought, imagination, possibility, probability, memory and culture. To say the least, if the body can feel so many things, and if that body is spread widely, then that possibility of feeling only expands within the expansive and expanded self. Or, to quote the book: “I have a son. Yes. Minister. I have a thousand.” Tokyo seems to ask how can one recover from the responsibility of a thousand sons; how can the self be so wide?

Though I would struggle to call it a novel, this book is definitely written by a novelist. The book takes time to gain momentum, which it easily maintains. It isn’t immediately captivating, but I found if I gave myself time – as with any great city or book (or as with any great book that mimics a city, like Tokyo does) – if I wandered far enough in, it became inescapable.

Tokyo is enjoyable because, at the very least, it offers one an opportunity to empathize with a character who is constantly on the verge of giving up. At other times it feels slowly and carefully intimate, concerned about being overheard and worried about over-speaking. At other times it offers the wonder of the flaneur, a circuitous walk through an overwhelming city of details that provide the hungry ogler with plenty to take in.

The book calls to mind the energy it takes to continually return to unfinished ideas, and the joy it brings to walk into and back out of dead ends. I might even suggest that the Michael Mejia’s Tokyo remains skeptical of advance, resistant to progress in favor of process, which is another way of saying that the book resists didacticism and remains as an aestheticism; it does not preach, but it does impress; it is not rhetoric, but it is poetic. In its own words: “Is it possible, Minister, that truth, too, is such a substance: not developing, as we may believe, from blind ignorance toward clarity and understanding, but rather suffering its nature to be more constantly, and randomly, remade?”

In our day, I could only hope this is the case.

You can read an excerpt from Tokyo published by 15 Bytes last July here.