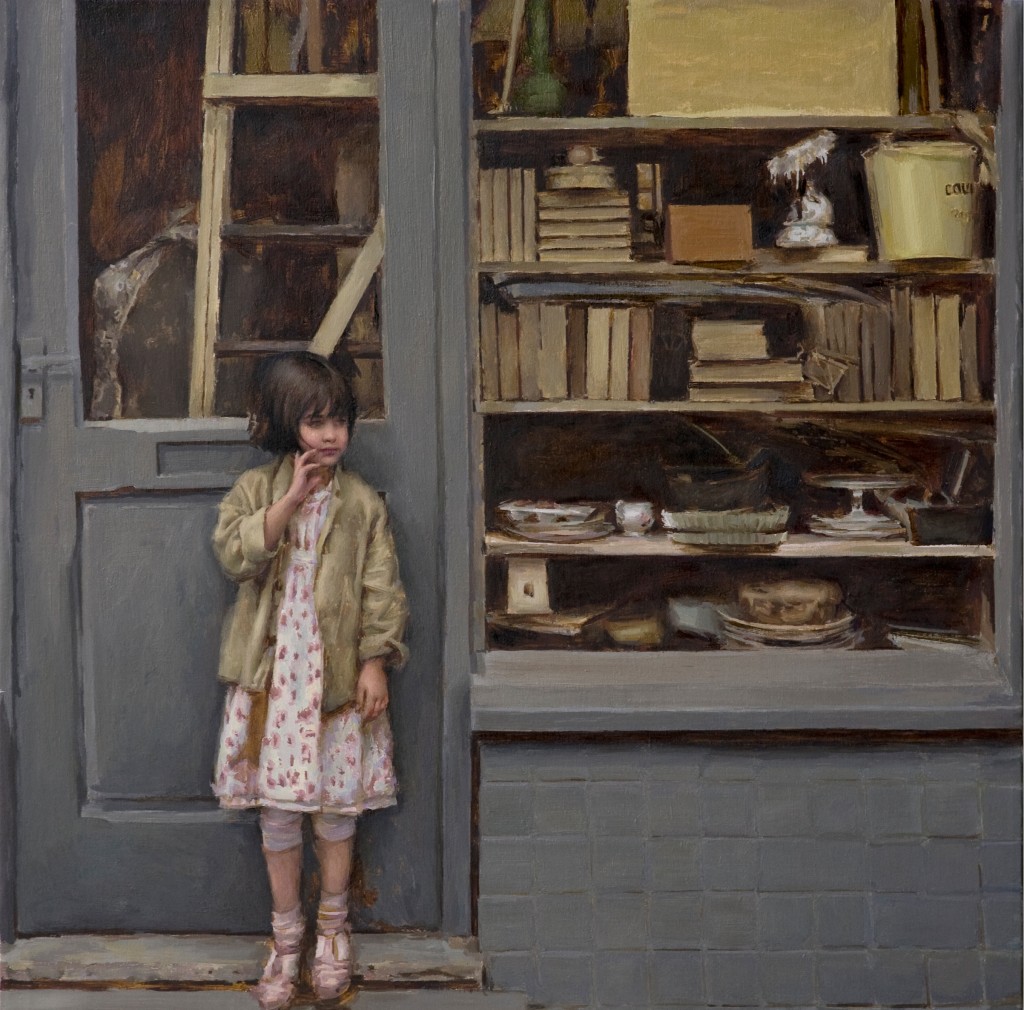 Some years ago—never mind how long precisely—the film critic Stuart Klawans told me I was “the sort of viewer who is as interested in the film outside the film” as I am in what happens in it. It wasn’t a compliment; more an acknowledgment of temptation. Yet I believe the same urge bedevils all the arts, and from time to time the story surrounding a specific work, or even an entire period in an artist’s life, presumes that same clumsy relevance, so that how a painting came to be, or to look the way it does, begins to seem noteworthy in and of itself. For the most part, of course, biographical information about an artist is of academic interest at best, mostly irrelevant, and prurient at worst. To observe that a painter who has just turned 30 has simultaneously produced an exhibition of paintings measuring 30” x 30” square adds nothing to their appreciation, even if there were a deliberate connection. On the other hand, to note that since Mary Sauer last showed in Salt Lake City she has given birth to a daughter, and since then also painted images of children that depart dramatically from her earlier work, hardly seems like a hindrance or misdirection in contemplating the trajectory of her art. She, herself, hinted at a connection at her opening, when she told her gathered fans that for many years she didn’t really enjoy the company of children, but that changed rather suddenly, if coincidentally, in time for her dual forays into the subject matter.

Sauer popped up briefly on the Salt Lake scene two years ago, on the occasion of her graduation from the University of Utah, which was accompanied by the University Art Department’s usual too-brief thesis exhibit, which in her case demonstrated prodigious skill and a mature, sophisticated vision. Titled The Pressures of Perfection, and covered at the time by 15 Bytes, that earlier outing featured figure and portrait work equal to that seen in Stillness, her current show at Anthony’s Fine Art, but painted not only in sharp focus, but with a cold, analytical precision that, if anything, seemed far more in the manner of the 21st century than what now follows. In fact, comparing those days with the present, and knowing as well that she spent several years painting for Jeff Koons LLC before finishing her art school education, it is almost possible to believe that she is living out her career backward, beginning where she might have ended up, with a dead-end job in a post-modern art mill where the skilled work is done entirely by hired hands. In this parallel universe, the preparatory training that should have come first and gone to waste in the final outcome instead rescues her, leading to the career she dreamed of. That part, at least, seems to coincide with the facts. Meanwhile, the actual artwork started out looking like late 20th-century photorealism, stripped and stark, but then came gradually to resemble more and more the rich and opulent painterly style of the 19th-century masters, in the moment when the art of painting arguably climaxed

It’s important to realize that it’s not the presence of children that has changed in two years. In fact, three major works in The Pressure of Perfection included children. What has changed is their roles. They have moved from the periphery, where they served as symbolic accessories in the lives of their mothers, to become the center of attention, as autonomous beings in their own rights. In the review of her thesis show, I noted how rare it must be for a graduating student to have to borrow a work from a leading regional museum in order to include it with her student work, but what I may have missed in relating that story was a major distinction evident across that body of work. While all the paintings share a common theme—in essence the anxiety caused in the lives of their subjects by the pressure to achieve a challenging role and amass a daunting list of accomplishments—the body of work divides neatly into two parts: portraits, in which the symbolic accessories were familiar material goods, and those works—“Contemporary Motherhood,” “Expectations,” and “Release”—where children were included among them. So it’s possible to wonder if the success of “Sara,” the portrait acquired by the Springville Art Museum, was in any way due to the fact that it did not challenge the local audience by showing children in the metaphorical role of anchors weighing down the subjects as they struggled to rise above their material and social predicaments.

In any event, the viewer immediately confronts two substantial changes in the recent show, and because her new work arises from the time-honored conventions of painting, in which content and form are tied together by aesthetic principles, those changes, the one in content, the other in form, are intimately linked. In “I Wander Lonely As a Cloud,” a girl stands on the stoop of what might be a 19th-century building, gazing about herself. The artist has said that she saw this child, who stood thus for hours, observing but not yet venturing forth. Of course, it would be lending too much interpretive authority to the painter to limit what one ascribes to this image as narrowly as her comments permit. The contents of the room behind the door, including what may be cookbooks, but in any event are certainly venerable hardbacks, serving dishes, vases, and even a bucket, lend an antiquarian feel that is not contradicted by the child’s dress or gesture. Not only is there no computer visible through the glass (as there is in almost every home surrounding my own) but there is no television, radio, or even a telephone. In short, the room she has stepped out of physically, but not separated from emotionally, suggests the Old World, or at least an old, isolated world such as childhood, from which she contemplates departing on a journey such as life. This is how art in the past employed visual associations to engender psychological and emotional truths. The painter’s technique, meanwhile, has abandoned the cold, surgical rigor of The Pressure of Perfection in favor of softer, more tactile brushwork and an overall less hysterical, more relaxed and inviting surface. Finally, what tension that can be detected has more to do with the back-and-forth pull between the claim of a representation to embody the truth, versus the undeniable visual evidence that it’s a picture of truth.

Sauer’s audience gets a glimpse into these matters when seeing the recent work all together in the gallery. For each large panel, a small compositional study is provided, perhaps one twenty-fifth the size of the final work, in the painting of which the location of figures and the overall perspective have been settled. Subsequent studies, four times larger, permit experimentation with colors and balance. Finally, the full-size version demonstrates a level of control rarely seen in today’s art, where the artist’s or curator’s explanation of the original intent completely overwhelms the ambiguous, nonverbal suggestions possible in art. Thus Sauer avoids the flaws of verbal language in favor of a more nuanced version. An example of how this level of control matters can be seen in the several versions of “Castle on a Cloud,” which depicts two girls in the bay window of their playroom. One girl, the nearer, plays with a dollhouse that looks as solid as she, while the other, who gazes out a window, is almost dematerialized by light surrounding her. Here Sauer essays the level of psychological realism achieved by John Singer Sargent in his early masterpiece, “The Daughters of Edward Darley Boit” (1882). There Jane and Florence, the two oldest sisters, either emerge from or disappear into the gloom of the entryway in an unsettling ambivalence. And like Jane, the sunstruck figure in “Castle on a Cloud” poses as almost no one does in a portrait: gazing neither out of nor within the illusionistic space, but directly along the picture plane.

It comes as no surprise that this kind of painting has its detractors in an age of shallow, undiscriminating arts. It’s not original, it’s old fashioned, or like an historical novel, it permits a nostalgic retreat to a sentimental, remote moment in history. Yet if the experiment with abstraction has taught anything, it should be this: artworks that mirror on an aesthetic plane the physiological process of seeing are the only objects worthy of the name, so that great artworks are timeless, rooted in unchanging human biology. No memorable painter has succeeded in making memorable images in which the human eye and mind cannot, or will not find a representation, even if it’s of nothing ever seen outside the painted space. Meanwhile, thousands of years of art history climaxed in the invention, by several British painters around 1840, of the camera, a device that rendered redundant the countless hours spent learning how to do what they could, and Sauer can, do in the way of copying reality. But then the camera, and its progeny, went on to undermine the powerful freedom of the artist to dream while awake.

What, then, has Sauer achieved in Stillness? The simplest answer is that she’s undone the error of her earlier work, in which children were reduced to walk-on parts in the lives of her contemporaries. Here she attempts to right that balance by looking into their lives, seen apart from the adult lives around which they previously hovered. If that was her goal, I’m not convinced she succeeds; the mind of a child is terra incognita, after all, forbidden even to the child in question once she has grown up. But Mary Sauer has paraphrased that empire, made it visible and set it apart by her employment of a mock-nostalgic presentation that quickly breaks down, revealing its fragility through the unsustainable illusion of paint. Like any truly first-class experience, it’s repeatable. Our eyes and minds build it, see through it, examine the ruins, and then—build it again. 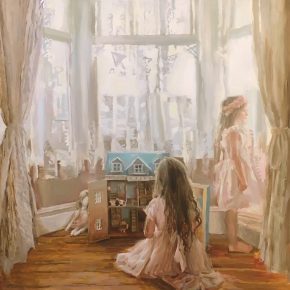 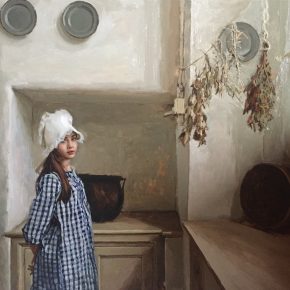 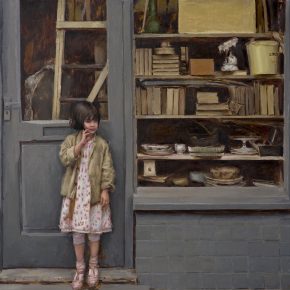 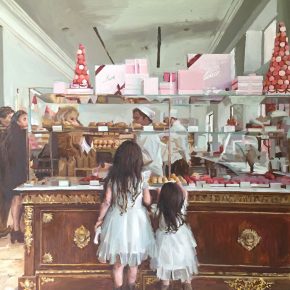 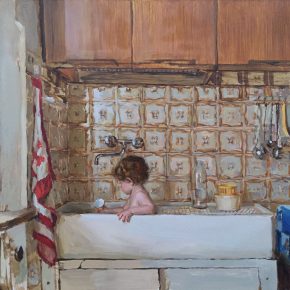