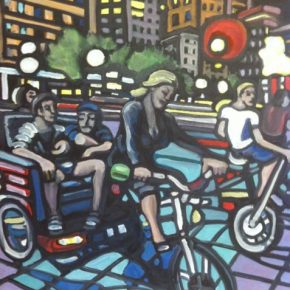 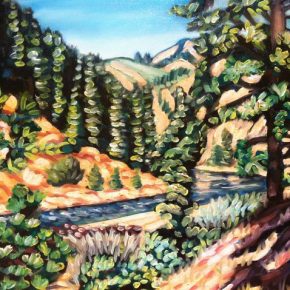 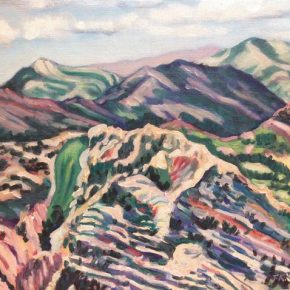 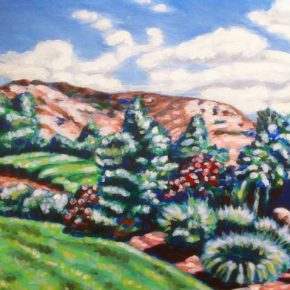 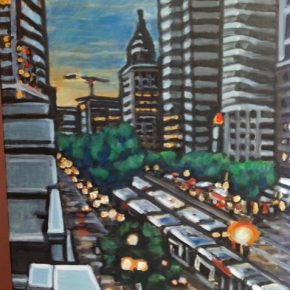 Wending your way through the basement corridors of Sprague Branch Library in Sugar House, you’ll eventually come across a group of 20 artworks by Terence K. Stephens. (I’ve never had to actually hunt through a building for an exhibit before, but thought this one worth the effort.)

Titled Greater Salt Lake, the show primarily is composed of cityscapes with some skillfully painted regional mountain scenes thrown in. The kicker? Most of the cityscapes are of scenes sketched from the artist’s lofty apartment windows located on several floors high above his gallery, Art270, on Salt Lake City’s Main Street.

There’s TRAX, for example, and the Judge Building that belonged to Stephens’ late Great Aunt Mary Judge and can be viewed from the artist’s living room. Mary Judge was the sister of Jenny Judge Kearns (Stephens’ great-grandmother), wife of U.S. Senator Thomas Kearns who was an owner of Park City’s Silver King Mine and of The Salt Lake Tribune. Yes, it’s complicated. Stephens also has a dog named Cougie. The two moved here from San Francisco two years ago to turn AJ’s Kwik Mart into a narrow but workable gallery that is always open for the Stroll, and Wednesday through Saturday, 1-5 p.m.

But, back to the Sprague show. It’s not particularly well hung – the paintings are quite precisely lined up along a couple of walls like elementary kids in a bus line – and not well lit, either, though the extraordinary colors still manage to pop pleasingly, as in “Canyon Pass,” oil on canvas, 20” x 16”. But you have to lean way in to see anything of the work.

With “Rush Hour,” o/c, 16” x 20”, one gets a sense of the energy of the city. Set against a sunset sky, TRAX cars line up against their platforms, automobiles with lights gleaming move single file down a tree-lined street, lights sparkle in tiers of business buildings and condos as the street lamps start to glow. It’s a very busy downtown and probably more exciting than Salt Lake City really gets – even at “Rush Hour.” But then, I pretty much stay in my own ‘hood, so wouldn’t know for sure what T.K. Stephens sees out his window. He paints quite a beautiful city that makes me glad to live here.

“Bike Taxi” appears to be near Abravanel Hall (you could play the Deseret News feature “Itty Bitty Salt Lake City” with this exhibit) with a woman taxi driver pedaling two men across the cobblestones. At the opening, Stephens graphically described one of them as “a drunken slob” and seemed sympathetic to the woman driver. Not chauvinistic, mind you, sympathetic. Again, the buildings against a very dark night sky are elegantly portrayed in colors that bring Hopper to mind. Street lights are white orbs; trees are lush on this summery evening. This 16”x 20” oil is meant to make you smile, and it succeeds.

In the foothills, Stephens does even more detailed trees and marvelous clouds. With “Red Butte,” 20” x 18”, he demonstrates a facile use of acrylic. It’s an interesting study of trees and brush, with reds and greens, whites and blues used so well you want to stand and look and go back and look some more.

However poorly hung and hard to find, this is perhaps a better show than we’ve seen from this artist in his own gallery on Main Street. There is a cohesiveness; a concentration of energy and lack of distraction from the paintings themselves that is appealing. No sculpture, no work by other artists, just solid paintings by T.K. Stephens.