I won’t say he’s the best we’ve got (I’ve gotten flack for doing that in the past). But he may be the best we have up this month. Max Grundy has made me fall in love with Gallery Stroll all over again.

Grundy’s show at the Unknown Gallery entitled Media Fear is the type of show that gets underneath your skin and stays with you long after you have made your way out the door with as much free grub as possible. Grundy’s new show takes its inspiration from a slogan you’ll find imprinted on t-shirts, pullovers and caps available within the gallery: “Fear is the New Beauty.” The simplicity and the paradox of this statement are the perfect summation of what is going on in this show.

You won’t find any of these works beautiful. They are thought provoking, yes, and the intellectual can have its own sort of beauty, but it’s not even that. You’re not going to find any eloquent statement or post-doctoral thesis in these works. They are visceral, shockingly simple and insipidly disturbing. These works are “beautiful” because they have a certain power over you. They get into your eyes, lodging somewhere around the optic nerve, where they both prick and massage your brain at the same time. 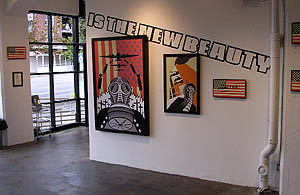 There is absolutely no beautiful painting here. In fact no painting at all, except two works, but I think these can be dismissed out of hand. There are no gorgeous materials, no fragile papers or sensuous inks. The works are prepared digitally and printed as giclee on vinyl. What could be more UN-fine art, right? But, well, that’s the point.

Grundy, who graduated with an M.F.A. from B.Y.U., was inspired by his study of propaganda for this exhibit. The works are done in the style of Soviet-era propaganda posters and banners, the type of things that would drape tall buildings (kind of like those banners during the Olympics come to think of it) or be plastered all over city walls. They are the very emblem of an American idea of the cold and gray Soviet Union forty years ago. Only thing, is, Grundy has recontextualized the whole thing and dropped it into the 21st-century American psyche. 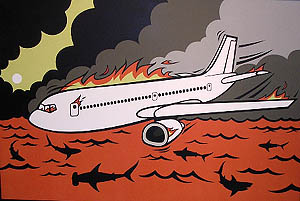 In “Media Fear #2” we see the trajectory of a plane crashing into two large skyscrapers, obviously the twin towers. In “Media Fear (Run)” we see three silhouetted images of people fleeing against a skyscraper background with a film negative of a moving airplane seen on the side. Grundy has tapped into the images that have propelled our consciousness in the post 9/11 world.

Look at “Media Fear #2.” Who would think that a gas mask would still have the ability to terrify? It’s so World War II, right? So, well, European, so mustard gas and all that. But that image of a gas mask reaches inside the chilly parts of your consciousness. It is not just the literal use of the mask — would a gas mask save us if there was a chemical attack? What about a biological attack? Grundy’s inversion of propaganda makes you wonder if the mask isn’t so powerful because it is the symbol of our fearful souls. It is ourselves, trapped in the confined world and limited vision of the very thing designed to protect us. 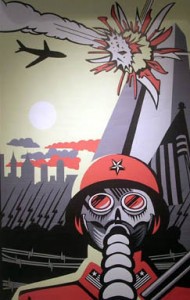 This consciousness has been greatly driven by the media, which in our age is dominated by the visual. If there had been no footage of that awful scene of the planes crashing into the twin towers, if it had not been shown over and over again until it stopped turning our stomachs and became an emblem, a rally cry, would we have gone to all the trouble in our foreign “excursions”? Grundy’s works are engaging the media’s penchant for magnifying and multiplying images that create fear. They do it, because, well, we like fear. It makes us feel alive. It’s kind of beautiful in that way. Grundy’s works de-construct this beauty.

Grundy’s style is so simplistic as to be self-effacing. But it is the materials and means that is part of the message. Part of the message is a warning sign of the dangers of simplicity. Take, for instance, the “Commandment” works. In “Thou Shalt Not Kill” we see imagery of dead bodies, crosses marking the graves, as warplanes fly overhead. I can just hear someone of a religious persuasion, in an attempt to justify American bellicosity, saying, “But wait, it’s not that simple.” But isn’t it? “Thou shalt not kill” is as simplistic as “the war on terror.” It’s always simplistic one-sided slogans that we throw around and beat each other up with to get our way. That’s just it. Sometimes we love simplistic slogans. We like the appeal of propaganda because in its flat, evenly colored simplicity it frees our minds from complication. 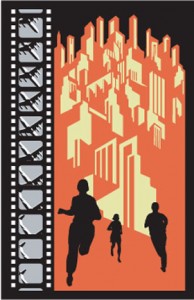 Grundy inverts this simplicity with his style. In a few of his works he shows planes being destroyed, blowing up in midair or crashing into the water. The style is the same one used in those airplane cards that tell us to calmly place the oxygen masks on our face in the case of a drop in cabin pressure. But Grundy shows us what is really going on in our mind, the deep-bedded fear that many have when flying and the more general post 9/11 fear of airplanes.

Go see this show. You won’t need to take the time to examine details of a master craftsman’s hand. But you’ll find yourself standing in front of these works. You’ll immediately recognize the imagery. But unlike most art you’ll see this month, the images won’t quickly leave your consciousness. The work will stay with you, working itself through your mind. And next time you see the news, maybe you’ll see that newscaster in a gas mask. 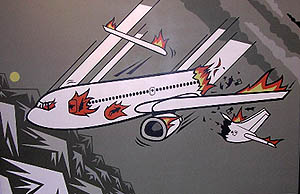 Media Fear continues at the Unknown Gallery through October 14th.