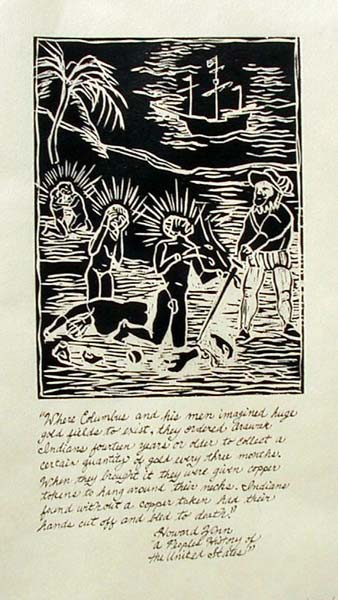 I am currently reading the book 1491, by journalist Charles C. Mann, which examines current research into life in the Americas before the arrival of Europeans. One of the main theses of the book is that the continents were much more densely populated with more advanced civilizations than we had previously thought. The civilizations that the majority of the explorers and conquistadors came across were already extremely depopulated and reeling in chaos due to the smallpox and other diseases brought by Europeans that usually preceded them into these civilizations.

Such, of course, was not the case with Columbus (whose day we “celebrate” this month), the first European to encounter American civilizations. This encounter between Columbus and the Arawaks is the subject for a current exhibit at the Sprague Library by printmaker Lisa Nichols (thru November 19th).

Nichols’ exhibit consists of two series of prints. One series, six monotypes titled “USA Inc,” is a commentary on current political issues. The other is the aforementioned series on Columbus and the Arawaks done in woodblock prints with quotes in a calligraphy style on each piece.

Nichols’ woodblock prints depict scenes of conquest, enslavement and death in the encounter with Columbus and the Arawak. Each of the six pieces – “The Meeting,” “The Search for Gold,” The Great Slave Raid,” “The Mountains are Stripped,” “The Children Died,” “A Culture Erased” – are well composed juxtapositions of black and white, with simplistic figures done in a somewhat awkward hand. The choice of media and style of execution are interesting because the woodblock prints mimic both the illustrations in books of the time depicting the “New World” as well as childhood storybooks, where we get much of our received notions of Columbus. 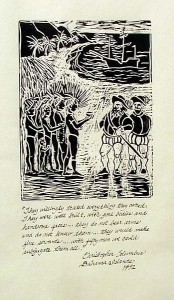 Because Nichols point, of course, is that the encounter between the two cultures was not a discovery of a new world but the murder, enslavement and exploitation of one culture by another. With each of the prints she has included — on the paper and part of the work itself — quotes about the encounters. Most are from the original explorers, – Columbus and Bartolome de Las Casas, – but a couple are from current books on the subject. This mixed bag of quotes has a mixed result. When the quotes are directly from the source, such as when Columbus says, “Let us in the name of the Holy Trinity go on sending all the slaves that can be sold,” they are jarring and effective. When Nichols quotes from sources like Howard Zinn’s A People’s History of the United States (1980), they are maybe more informative (by 1550 there were only 500 Arawak left) but less poignant.

Which leads me to my point about art as activism. Political art is so difficult because to be political is as easy as saying “the Left is right” or “the Right is wrong But to make it art requires taking it to a different level. Though at times, with her juxtaposition of the images and the quotes, Nichols’ pieces approach interesting art, ultimately they lack the irony or insight that would give them depth and make them something more than political statements.

This is especially the case in Nichols other series, “USA, Inc.” These six grainy monotype prints address current political issues. The grainy nature of the monotypes is problematic for these pieces. In a work like “Collateral Damage,” where we see a lone child standing among remnants of bodies, the grainy feel seems appropriate, giving us a sense of the moment conveyed without deteriorating into opportunistic voyeurism. But in the other pieces, especially “Mass Transit,” which shows cars blocked on a highway ramp, the materials do not seem adapted to this message. 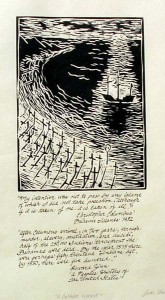 This, I believe, is one of the most important aspects of art as activism. For the activism not to overshadow the art, everything, including the materials, must be made an integral part of the statement. This is something that I think Max Grundy, also showing this month, does well. I understand that someone else is writing on Grundy’s exhibit [see page 7], so I won’t dwell on his show too long. Suffice it to say, his mass-produced propaganda style art subverts propaganda and its political statements by incorporating its means. Nichols’ pieces do something similar with the use of a stamp, in red, imprinted on each monotype that reads “USA Inc.” Ultimately, though, I feel the pieces are illustrations, or a propaganda of their own, and not exceptionally well executed ones.

I’ve never seen Nichols pieces before and I think she might have some promise with her woodblock prints. Her pieces are certainly topical considering the upcoming holiday, and might be a nice starting point at the library before picking up 1491. But I think they are also a warning about the difficulties of making art as activism.

Discovery and Conquest, an exhibition of prints by Lisa Nichols is now on exhibit at the Sprague Library (2131 South 1100 East, SLC) thru November 19th.