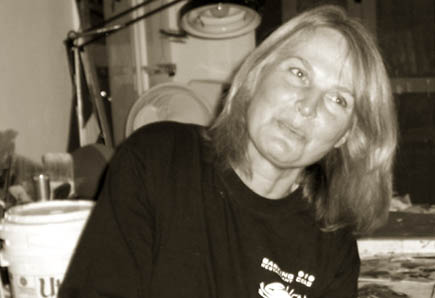 In her 1995 Masters thesis, Salt Lake City artist Diana Garff Gardiner quotes American watercolorist Charles Hawthorne: “Better to make a big thing out of a little subject than to make a little thing out of a big one.”

Gardiner takes this advice to heart as she finds focus and formality in everyday objects. In her paintings and collages she reveals the beauty of the commonplace and the seduction of simplicity. “My influence is based on where I find my center,” says Gardiner. “Some people go to church or out in nature to find their center, but for me it’s being able to capture a little bit of my past, and it’s also about the rituals I do every day.”

After receiving a BFA from the University of Utah in 1974, Gardiner took a break from school to raise a family. In 1985 she decided to return to the University where she had the opportunity to study with Paul Davis, David Dornan and Ed Maryon. “It was interesting, because at the time they wanted me to work up in the studio at the school, but I was too separate from the place that centered me, so eventually I got permission from my committee to work from home.” She moved her studio into her dining room, using a piano bench as an easel. Gardiner credits her committee chair, Paul Davis, for giving her the support she needed. “He saw that I had potential. He saw past the fact that I was a woman with a family in a Mormon culture. He was hard on me, but he encouraged me.” 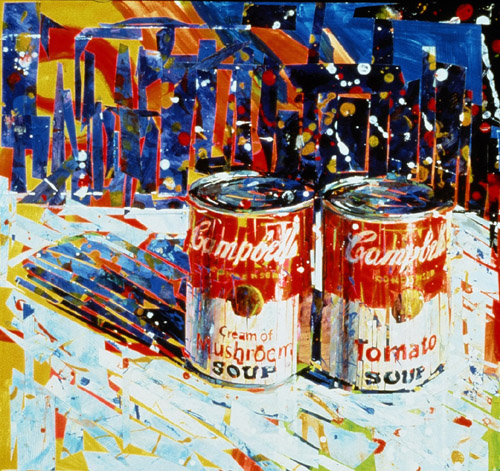 Through graduate school, Gardiner strived to establish a strong artistic identity, exploring different methods and materials. She experimented with objects other than brushes to apply paint, such as kitchen utensils, and eventually she turned to collage, using grocery labels and garbage in place of paint. The result was pleasantly surprising. “The surfaces were very lively. They started to imitate the kitchen counters after you made a big mess. To me that felt really honest so I started accentuating that with the paint on top of the paper.”

Naturally, Gardiner drew subject matter from her surroundings and her daily housecleaning rituals. She came to realize a “curious harmony” in herself. She describes it as “an absurd juxtaposition that involves the urgent need to make art and the necessity of dealing with the menial tasks of everyday life.” 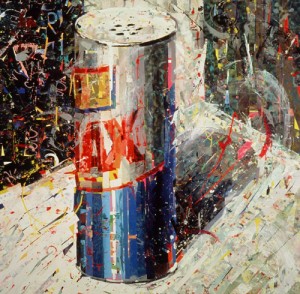 Her content is clearly domestic, and one might observe “Pop” influences with the depiction of consumer products (soup cans, condiments, etc.) in a fine art environment, but Gardiner insists that an important distinction be made: “The coolness of ’Pop’ art eliminates the love and devotion of the subject,” she explains. “My intent is to give back those emotions and elevate the symbols of the industrial revolution.”

Gardiner finds motivation and meaning in the objects surrounding her: a washer and dryer, a bowl of cereal, condiments in the refrigerator. She is inspired by the words of Joseph Campbell, who claimed: “By participating in a ritual, you are participating in a myth.” Gardiner began to write mythologies based on her daily rituals. She painted and collaged images she wrote about, attaching gender to the objects in her kitchen. She also did a self-portrait of a can of Ajax; underneath the surface of course, was a mythological story. The objects began to take on a life of their own; they began to mean more than she anticipated. 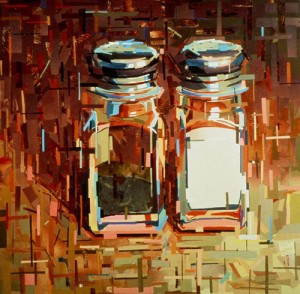 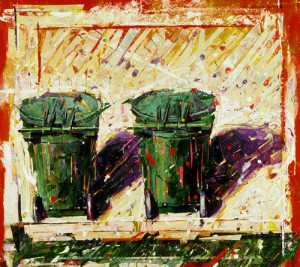 At times, the substance of Gardiner’s work is subconscious, especially when she thinks she is mindful of the content. In 1994, she created a show called “Duets” at Finch Lane Gallery where she placed two objects side by side in each painting. She did seven duets where each painting described her activities that day. “A friend made an interesting observation,” relates Gardiner. “She said, ‘None of them are touching, and they’re all very formal.’ I didn’t plan that, but the more I thought about it, it’s a personal expression of duet. I’ll collaborate, but ‘keep your space and I’ll keep mine.’ That really does describe me pretty well.” Her friend started to point out other things that repeated themselves throughout her work. “That blew me away. I thought, ‘I don’t want people to know that about me!’” 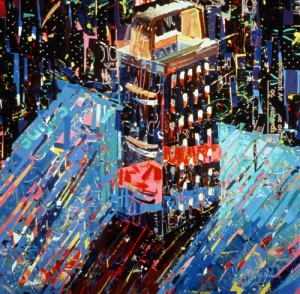 One of her most significant pieces, “The Gatekeeper,” is a straightforward image of a cheese grater. “It began with the cheese grater that was a tool in my kitchen. When I scaled it up, it became more about an instrument that is used to refine myself. When you think about the motion of using the grater, it’s taking the outer skin off of something. I really hate using the grater because it causes pain; it exposes the inner parts. I hate pain and I hate death and I felt this was a metaphor that related to that. And then it started taking on spiritual and scriptural content. I thought more about the theology behind my beliefs and it became a symbol for Christ. Some people wear a cross, but the cheese grater applies more truthfully to me.”

It was when Gardiner enlarged more of her modest imagery that the items took on monumental meaning. “Scale has a huge impact. It suddenly humbles you. You’re almost brought to your knees because you feel this sense of worship.” So she created 6’ x 6’ “paper giants” as she calls them.

They were meant to be confrontational, but the larger scale also allowed Gardiner to be more playful and creative with the collage. She believes a work of art should be just as interesting up close as it is from far away. “They become more abstracted when you look at them up close. I like that the distance seduces you to come look closer – and up closer, you’ll find things that are maybe camouflaged because of the scale.” She finds that viewers spend a lot of time studying the papers that she used for the collages. Because the content of the papers she collects are often closely related to the content of the artwork, people often find themselves searching for something, almost in a “Where’s Waldo” fashion.

Collage remains her medium of choice, not because she enjoys it the most, but because she likes the outcome the best. “I have a tendency to work too tight with painting. When I translate paintings into collage they become looser and abstract, and that’s what I like about the process. A painting I can predict, but the papers I can’t.”

Gardiner compares it to playing a difficult piece of music: “It takes more energy for me to do the collage. I really have to focus and think things through. The hard thing about working with papers is you only have a hard edge, if I need to soften an edge I have to use gradations of color. And the glues with collage are unforgiving.” She won’t layer the collage because she doesn’t like the crisscrossing of papers. “Usually when I put something down I’ve got to get it right.”

This discipline comes from her undergraduate studies with Alvin Gittins. “When I learned to paint, especially with Gittins, I was taught to mix the right color and put it down. Now you see a lot of artists mixing on the surface. If you start mixing on the surface, you lose the freshness and it looks amateurish.” So Gardiner carefully considers her material, placing the papers as she would a brushstroke.

Gardiner is not in the kitchen as much now that her children are grown, so she has moved away from creating images of kitchen appliances. “I find that it still surfaces in my work, but it’s not as conscious as I made it initially. I find I still do things that seem somewhat domesticated.” 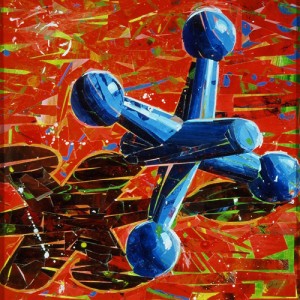 Gardiner is always open to trying new things. She has taught at the University of Utah for the past sixteen years, but just this year she began teaching drawing for the Architecture Department. “It suits me. I’m teaching perspective, texture and line logic. I think that is such the core of what I do. Being trained in a traditional way, I can abstract from that but I can’t completely deviate from that. I have such a conviction that if you don’t have that basis, you’re cheating yourself. It’s been very valuable to me and I wouldn’t dare be an artist without it. In the Architecture Department, the more disciplined I am in my approach, the more they appreciate it.”

Teaching architecture students has inspired her to add a three dimensional aspect to her own work. “I haven’t refined it or anything, but I’d like to do some more exploration with it. There’s a thing about houses that I’m curious to develop.”

The business and marketing side of being an artist is something Gardiner feels she is looking at for the first time. Currently, she is working on a series of collages representing children’s toys that she hopes to submit to Portfolio and have reproduced as posters. “I’ve always had a love for graphics, and I’m not opposed to going down that road. I’m a purist to a sense that a painting is a painting and it should remain as such, but I have a graphic background, so to me it’s just another extension of the world of art. And if I can tap into that and be successful, I’ll take it. If you have one or two interesting pieces that you can mass produce as posters, it can be pretty lucrative.” 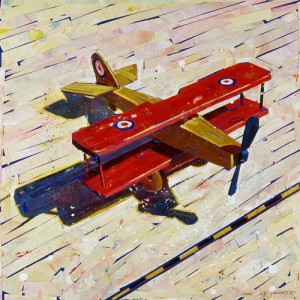 Gardiner recognizes that a lot of the artwork readily available to the public isn’t always good art. “The most sellable art is not the best art. My next move is to think about that more seriously.” She wants to further explore and emphasize the impact of art that is painted well.

Through her own studies and her career as artist and instructor, Gardiner has been privileged to work with wonderful painters. At the same time, she came together with her own voice and astutely found her niche as she continues to stick to simplistic ideas and implement them with devotion and skill.