Your tears, you should give them to the flowers: George B. Handley’s American Fork 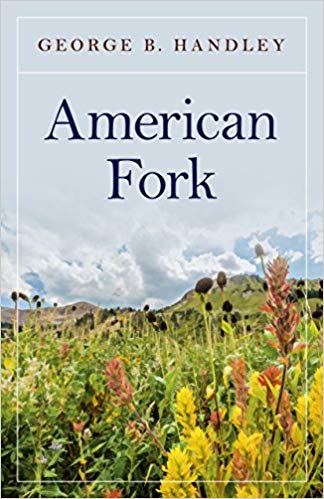 George Handley’s debut novel, “American Fork,” artfully weaves together themes of religion, environment, memory, belonging, nation, faith, and loss with haunting prose and wonderful insight. This novel stands apart as a beautiful, well-crafted story with fully fleshed-out characters. The individual pains and desires of these characters invite readers to invest in their stories in a transformative way.

“American Fork” centers on an unexpected friendship between Alba Powell, a young Chilean-born Brigham Young University MFA student, and Zacharias Harker, an aging, cantankerous botanist. Harker hires Alba to paint flowers for a book he is writing on the Wasatch Mountains. Although the two initially butt heads, Alba and Harker develop a powerful bond that will lead them both toward healing. Deep in the canyon of American Fork, Utah, Harker teaches Alba about the importance of context, asking her to paint an individual flower with attention to its relation to what surrounds it. Ultimately, Harker encourages Alba to consider her own context with more purpose. As an immigrant and second-generation member of The Church of Jesus Christ of Latter-day Saints, Alba has difficulty finding her place in a predominately white community with “pioneer” heritage.

After the attacks of 9/11, Alba becomes increasingly aware of her ethnic difference as Americans seem “increasingly anxious about so many strangers in their midst.” This prompts her to wonder if “maybe she had become, or had always been, one of those strangers, not a fellow citizen with the saints as she had been made to feel so early in her life.” Her feeling of rootlessness is compounded by the mystery surrounding her father, who was “disappeared” during the Pinochet regime in the 1980s. Harker’s lectures on ecological context inspire Alba to return to Chile and search for information about her father to make sense of her fragmented past.

Alba’s experiences in Chile comprise some of the most powerful chapters in the novel. It is a journey of healing and reclamation as Alba reconciles the dual parts of herself, like the forking of a river. She writes to Harker from Chile, “[F]ork, you know, implies a kind of split or division, which is only because we are looking at it in the wrong direction, upstream… What appears to divide or split or force a choice is really reunion, confluence when seen looking downstream.”

Alba realizes her perspective has been all wrong. Whereas she previously saw her past as irrevocably broken, she now realizes that fragments can be grafted together through imagination and creativity. She no longer mourns her “fragmented” identity. She leaves Chile with an expansive sense of self, understanding that she can make a “home out of perpetual homesickness.”

The force of this personal revelation is magnified by geography. When Alba returns to Utah, she envisions the mountains that surround Santiago imposed on the Wasatch Mountains and realizes that she “would always see in stereo a world forked apart by continental drift, by history, by language, and by politics, but those external and formal markers of difference could only temporarily disguise the profound underground currents of kinship that knitted the hemisphere into a whole.” To see division is to look in “the wrong direction.”

Thus, “American Fork’s” title not only acknowledges the specific setting for Harker’s Utah home and the canyon that he and Alba explore, but also points towards Handley’s hemispheric approach. In the context of this novel, American (in the broadest sense of the term) is inclusive and transnational. North and South America’s differences diminish in the context of shared tragedy. Handley skillfully emphasizes this by setting the novel in 2001, linking the U.S.’s national tragedy of 9/11 with the Chilean trauma of the Pinochet dictatorship, marked by a coup d’état 28 years earlier on Sept. 11, 1973. This historical coincidence takes on poetic meaning as Alba triangulates the tragedy of 9/11, the traumatic legacy of the Pinochet dictatorship, and the pain of her own fragmented past.

The novel’s transnational focus sets “American Fork” apart from most LDS literature, which is dominated by U.S. and European authors and characters. Handley’s novel is refreshingly hemispheric in scope, making it an important literary contribution inside and outside of an LDS literary context. Its exploration of the terror and trauma endured by those who suffered (and continue to suffer) because of Pinochet evokes Isabel Allende’s “House of the Spirits.” And like Allende’s debut novel, “American Fork” emphasizes the value of creativity in the face of a nightmarish history.

By way of themes, “American Fork” is similar to a recent novel by Handley’s BYU colleague Steven Peck, whose “Gilda Trillim” also illuminates the intersection of biology and theology, with the concept relation as fulcrum. Alba addresses the power of relation when she writes to Harker from Chile about her encounter with Mapuche poetry:

It was as if I had heard that language all of my life, and I don’t just mean the Mapuche language—I mean the language, I guess, of the planet. I felt as if the pain he expressed was not unique to him or even to human beings, that it was maybe part of a suffering the beauty of nature asks us to share with one another, with the promise of a kind of healing that I associate with the suffering of Jesus but which is expressed by the Mapuche as the suffering of the earth itself. There are spirits among us, that I have always believed. I used to think it was my father. But they came before us. It’s a crowded earth and we are not alone in our sorrows. And something holy in our tears. Here’s a line I have translated for you in a poem about the copihue and the chucao: “Your tears, you should give them to the flowers.”

This passage is a kind of microcosm of the whole novel as it illustrates the interweaving themes of environment, religion, and human suffering. The idea that nature’s beauty asks us to share suffering with one another is reflected in Alba and Harker’s friendship. Although Harker understands the importance of context and relation ecologically, he has lost sight of the importance of human connection. His relationship with Alba allows him to relearn that truth.

“American Fork” asks its readers to consider the importance of connection, whether that be in their personal relationships, their connection to the environment, or their relationship with God, though the novel’s discussion of religion is not overbearing or cliché-ridden. Through Harker, Handley explores the question, and even the burden, of faith with frankness; yet, hope abounds. This hope is encapsulated in the novel’s definition of redemption as “bringing [things] back into proper context and…perceiving them in the light of love, whereby they rejoin themselves to the Great Body of Truth.”

Through this understanding of redemption in “American Fork,” Handley again emphasizes the importance of relation and context. We can only find ourselves when we recognize our place in relation to what surrounds us: people, nature, and the Divine.

Tagged as: George B. Handley