The Truthful Surreal: Corinne Geertsen at the Springville Museum of Art 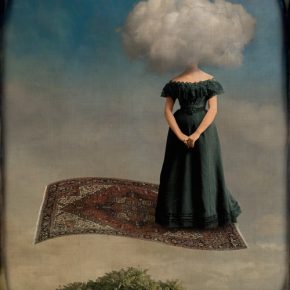 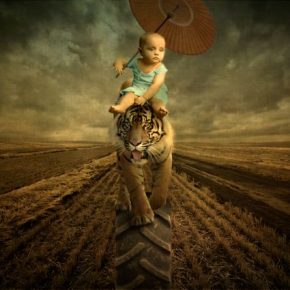 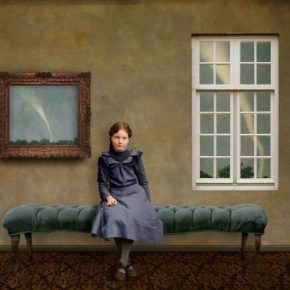 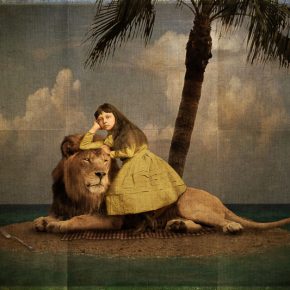 Narrative painting, in the form of history painting, was once the pinnacle of Western art, the zenith of Alberti’s 15th-century treatise on painting, and a prerequisite for anyone seeking access to prestigious academies in the 18th and 19th centuries. At the advent of modernism, narrative’s importance waned, while the notion of what narrative could be became more flexible, more malleable to new conceptual frameworks. In the past half century narrative has become an increasingly prevalent strategy for artists, so that today narrative is not only a common tool but also a common theme with which to explore the parameters of a post-historical context. When deftly employed by artists like Utah’s Corinne Geertsen, a BYU grad (B.A. and M.F.A.), who is showing this month at the Springville Museum of Art, narrative is a very effective way to evoke a sense of engagement, pushing a viewer to invest their sensibilities in the artwork. In her digital photo collages featuring 19th-century photographs of men in top hats and girls in frilly dresses mixing with a menagerie of animals against fanciful backdrops, Geertsen uses sensitivity, finesse and a droll sense of humor to create psychologically compelling narratives imbued both with a sense of nostalgia and a universal reach.

Geertsen’s strengths are clear in a work like “Picnic,” which is not really a picnic. It is as bucolic as any picnic should be, but takes place on an island so small it can barely fit one small palm tree and two inhabitants: the great lioness, gazing out to sea; and the young chestnut-haired girl in a pea-green frock, perhaps 12, who rests her elbow comfortably on the head of the lioness, her head in her palm as she stares with the gaze of eternity into the eyes of the viewer. Certain qualities about this image grip the sensibilities like a vise, taking hold and, stopping one in one’s path, causing the viewer to question who and what and where and why and when… and how? Most certainly the surreal element of the very lovely scene causes this line of questioning… it is nothing but impossible and only fantastical, and so much so that it causes a sense of detachment into its own reality that the viewer hopes to understand. The lioness is so at ease on her island, but how did she get there and why is she so content to stay? And why is this young girl, with a pale face and dark eyes in her Sunday best, sitting atop this lioness, and why does she have a look in her eyes so utterly tranquil that the viewer is sure she has been there since the beginning of time and will remain to see it through to the end?

Here Geertsen has created a surreal word from which the viewer is totally detached, but at the same time causes certain sensibilities to transgress this detachment; there is a curious feeling of “otherness,” a sense of something present yet at the same moment distant, a feeling of timelessness, yet without being able to catch hold of any fragment of it, confrontation so close yet with a displacement as distant as the sea itself, and a wanting to get a grip on the reality of it and knowing that is a fruitless impossibility, and ultimately, having to let it simply be so.

A lesser sense of the impossible is evoked in “Tornado,” but it is still imbued with a sense of the surreal and a sensibility of wanting to get a grip on the actuality of it possesses the viewer. A young girl in a dark violet dress sits restlessly in the center of a cushioned bench of teal green. Could she be a grandmother, a great-aunt, seen here in adolescence? Her historical presence is palpably felt yet genuinely brought to the present to incorporate the surreal space in which she, herself, has been placed. To her left is a painting — a large baroque gilded frame surrounds a composition with shrubs, a large sky, and a sinewy tornado. To her right is a much larger, white-framed window. It is closed, and frames in the distance another whirling tornado. Again, in this painting, there is a sense of surreal timelessness, of a duration that exists somewhere outside of time. Memory and recollection create meaning, filling in the canvas, giving life to the girl, and giving space to the sealed room by going beyond the window and connecting the phenomena inside the painting and outside the room. Again, it is the viewer’s sensibilities that respond to the indicators of the image, allowing for impossibility while acknowledging the possibility of the powers of cognition, of memory, of recollection, of attachment, connectivity, and the power over detachment.

If one approaches Geertsen’s pieces with a certain power of authority, realizing that one’s sensibilities are not powerless but have a place in her surreal discourse, that this surreality can come to life for sensible cognition, an entirely surreal canvas such as “Clouded” can become accessible, albeit distilled, as always, in its own reality and time. A woman is standing tall astride a flying carpet. She wears a Victorian black dress, and her head, quite literally, is in a cloud. The details are all wholly realistic, but their combination surreal. Yet as surreal as this image might be, as removed from one’s own reality, one may find a connection with the flight of freedom, and relate the Victorian sensibility of the woman who before the age of suffragettes has her shoulders bared, and her head in the clouds. In this light an image like “Grand Tour” — with its parasol-wielding baby astride a tiger walking on a tractor tire in a plowed field — need not be so foreign. Again, it exists in its own surreality, but the viewer need not question who, what, where, when, why, and how… but may join in the journey with this odd pair, feel the excited vigor of this baby who peers forward, and get “lost” in this narrative as one is intended to.

The individual elements of Geertsen’s works are very concrete, if for no other reason than that they are photographic. Their deft mixture, however, creates surreal narratives of mysterious attraction, which in turn open up for the viewer access to memory, to recollection, to meaning; they become immensely engaging, sending the viewer on adventures of wonderment and excitement, and become, if only for a few moments, entirely possible.

Beyond Memory: The Daydreams of Corinne Geertsen is at the Springville Museum of Art through April 26. To view more of the artist’s work, visit www.corinnegeertsen.com