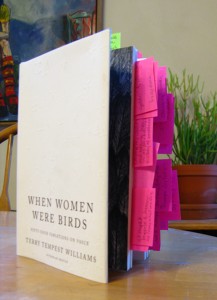 I’ve pretty much marked up every chapter with underlined passages, circled paragraphs, and left sticky notes to myself.

What do I make of all this? That’s the first question I asked myself when I began reading Terry Tempest Williams’ new book, When Women Were Birds.  I was going to say how much I enjoyed reading WWWB, but I think this photo is worth, as they say, a thousand words on how often I connected with what Williams was experiencing and struggling to understand . . . and really I couldn’t say it better than Betsy Burton’s review below.
As an artist, I am always trying to create meaning around the objects, metaphors and symbols that find their way into my artwork and attach themselves to my psyche.  It was nice to follow Williams’ creative exploration for the meaning behind her mother’s strange gift. I look forward to hearing more at the reading this Tuesday.
The King’s English Bookstore’s Betsy Burton review…

When Diane Tempest died at 54, bequeathing her journals to her daughter, Terry Tempest Williams approached her mother’s journals with a mix of longing and expectation. What she found was not revelation, however, but rather a bewilderment of blank pages; three shelves of journals, all empty; a second death. Stunned then, now 54 herself, Tempest Williams considers these same journals from the perspective of a woman of her mother’s age, mulling what the silence of those empty pages might mean, what secrets their blank surface might conceal. She decides to cross to the outer edge of her own life in order to search for the voice of her mother—to perhaps discover her own voice differently in the process. And in 54 quiet, incendiary, wise and wondrous meditations she does exactly that, using her mother’s mysterious legacy to explore the conjunction of family and nature, silence and voice, orthodoxy and freedom, the public and the private. Each page opens up the world in new ways, and as the words take wing so does the reader.