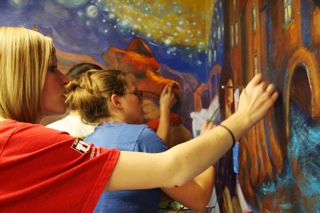 Ever wonder how artists work on giant “canvases,” like the sides of buildings, whole rooms, or gymnasiums? Start to finish, it’s a process that not only involves art, but also fundraising, negotiations, diplomacy, and problem solving. This I learned from Kim Martinez, who teaches a course in mural painting at the University of Utah, and Trent Alvey, a Salt Lake artist whose normally large canvases just got bigger with a mural project at Salt Lake County’s Central City Recreation Center.

“Keep it yellow in the middle,” cautions Kim Martinez to a student artist. “We don’t want it to go orange.”

Martinez is riding herd on 15 students from her mural painting class as they work on a mural spanning three walls and 213 square feet in the waiting room of the Primary Children’s Medical Center’s Pediatric Surgery/Gastroenterology unit. This and similar guidance, through 18 hours of painting, will result, Martinez hopes, in a cohesive painting that appears to have been completed by one artist rather than 15.

I am there to watch the students’ third and last day of painting. But a lot has happened to get to this point. Martinez prepares for this class by finding project funds; she’s raised more than $70,000 in the last three years (monies left over are used to take students on field trips to New York, Chicago, and other destinations). Then she writes proposals, negotiates with facility owners/managers, and handles the legal concerns about access to areas that may be normally restricted (it took me nearly an hour to get through hospital security and to find the mural site).

Martinez has no trouble finding potential mural sites. “I receive about 15 inquiries a year from various organizations requesting our insight and skills, indicating to me that the community values the power of art and its ability to transform a community,” says Martinez.

Students begin their work on the project with the creation of concepts for the mural. Each one paints a small painting, all of which are critiqued in class. Final selection of the mural design is left to the client. In this case, the staff of the PCMC unit selected the winning design – a brightly colored, surreal storybook landscape with treasure, dragons, castles, and pirate ships by student Chelsea Rushton. Once on site, students use a grid to transfer the design to the walls, drawing with charcoal and adjusting the design as needed. Then students do an acrylic under-painting, using thin layers of Utrecht acrylic paint in colors complementary to the final design. These are techniques used by international mural painter Judith Baca, Martinez explains. Martinez had the opportunity to work with Baca restoring the Great Wall of Los Angeles and on a large-scale mural in the Latino Cultural Center in Dallas, Texas.

During the painting process the normally neat waiting room, covered in drop cloths, becomes a temporary studio filled with paint jars, water buckets for rinsing brushes, and butcher trays for mixing colors. One of the biggest challenges is keeping the students spread out, working in different areas, so that they are not tripping over one another. Martinez moves students out of congested corners and into gaps where they can work with some elbow room.

Occasionally supervising the process are Janice Carpenter, office manager in general surgery, and Gail Beauregard, the medical staff coordinator for the gastrointestinal and surgery units. It must be hard to imagine that this work-in-progress will be the completed design in just four more hours of painting, but that’s the promise and expectation as Martinez takes a brush and demonstrates finishing touches on tree foliage: “When do I want volume? When do I want to flatten the form?”

There are other Martinez-led, student-painted murals around town, including the side of a building on 500 West behind the Rio Grande Depot, and a recently created mural in the Columbus Center in South Salt Lake. Meanwhile, over at Salt Lake County’s Central City Recreation Center, Trent Alvey is starting work on a mural in the gymnasium of the facility, which is undergoing extensive renovation. Alvey was selected after submitting a drawing and responding to the County’s request for proposal. After winning the contract, Alvey did additional sketches, enhancing the design in ways she thought were more exciting. But her client liked the original design better.

Though Alvey originally envisioned the mural would be lower-to-mid wall height, rec center officials wanted it to be high on the wall to avoid damage or vandalism. This created Alvey’s first big challenge: how to safely and efficiently paint across the wall at a height starting about 10 feet off the floor. She decided to rent scaffolding to minimize trips up and down a ladder. Though the unanticipated expense was high (about $1,000/month), it would ultimately save time and injury, she reasoned.

This is Alvey’s first mural painting, though she’s accustomed to painting on very large canvases. Unlike Martinez, she doesn’t have a pack of students to help her, but she calls on fellow artists Ken Davey, Patrick Munger, and Chase Leslie to help at times during the process.

Alvey uses latex house paint by Olympic, which has no volatile organic compound (VOC) fumes that could cause respiratory or other health problems. The newly refinished floors of the gym are protected from paint spills by large sheets of plywood. Alvey and her crew, unlike Martinez, are fortunate to have a nearby restroom for water and brush cleaning. The gym’s cinderblock walls provide a handy grid for mapping off the design. On the day I visit, Davey is painting large blocks of bright color as the background for Alvey’s realistically rendered, black and white figures of kids playing.

Alvey began painting the mural on November 8 and finished shortly before the holidays, just in time, she says, for her own painting exhibition and 3-D installation opening at Finch Lane Gallery in January. That exhibition, which includes light, sound, and performance, explores the nature of opposites, subject matter that happens to be exactly opposite of the refreshingly playful mural at the rec center.

The grand re-opening of the Central City Recreation Center will be held on February 10. “Waiting for a Call,” the University of Utah mural project under the direction of Kim Martinez, is located in the Primary Children’s Medical Centers Pediatric Surgery/Gastroenterology waiting room. Trent Alvey’s exhibit of paintings and installation opens at Finch Lane Gallery on January 8, 6 – 8 pm.