Deciphering the Language of the West: Brian Parkin at Moab Art Works 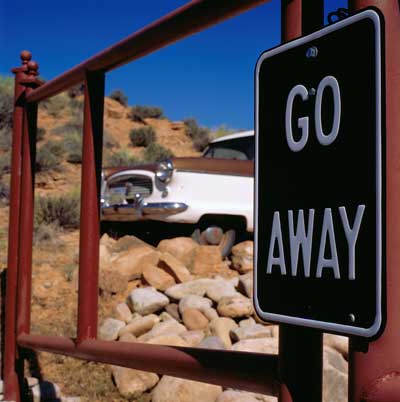 Leave it to an outsider to insightfully decipher the history of the American West through its own language. British-born photographer Brian Parkin, in an exhibit currently at Moab Art Works, focuses on barriers and their explicit signs to piece together the story of how this expansive landscape has been divided since it became part of the new territories. He uses color and composition which adds subtlety to the didactic qualities of the text and creates visually-appealing images.

These photos feel immediately accessible in their subject matter, bringing a quick smirk, snicker or shock as the viewer recognizes the humor or terror associated with signs that read “Butch Cassidy Water Park” or “Blasting at Unscheduled Times.” Every one of the twelve images that make up the show depicts a barrier, each revealing a different influence that has shaped the West, including ranching, outdoor tourism and the ongoing search for energy resources.

The first photo, entitled “Vacation,” captivates the viewer with the contrast of the rust red gate, deep azure sky and shades of white embodied in the rocky landscape and man-made metal objects. The angle of the gate which makes it appear open belies its bold sign that reads “Go Away.” If the fence looked less easily circumvented, it would appear to be protecting the classic car behind it. This juxtaposition conveys the paradox of the West, which is that each settler wants to preserve it exactly as he found it. 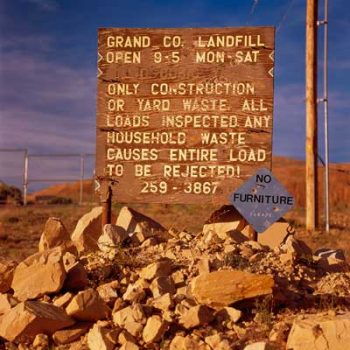 A second idea conveyed by this image is the desire to protect the classic from advancing progress and modernism, which is a theme resonant to Parkin. He continues to value and use traditional analog photography in the digital age, evident in his use of transparency film and Ilfochrome prints for this series.

The second unifying characteristic of Parkin’s images is the glow they exude. Stepping back from the images and viewing them as an entirety allows the eye to perceive the golds and reds often associated with landscape photography. These photos have created magic in rendering objects that are rusty, flaking or generally considered unappealing and making them attractive. This alchemy is identifying of Parkin’s philosophy, encapsulated in his own words, “I like to take beautiful pictures of banal or ugly things.”

In “Dumped” and “Power,” Parkin photographs the underbelly of modern society in a reconciling light. The angle at which he photographs the wire fencing protecting the power station creates interesting shapes and an aesthetic composition. The dominating sign reading “Danger High Voltage” electrifies the image with its directness and vibrant colors. 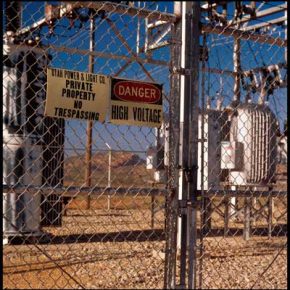 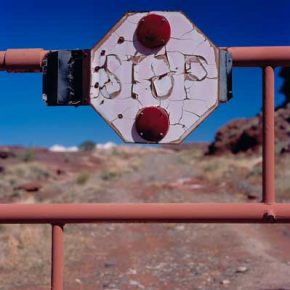 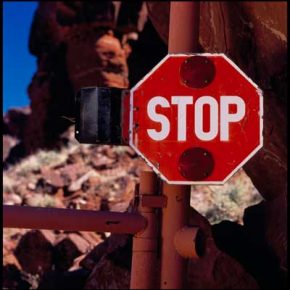 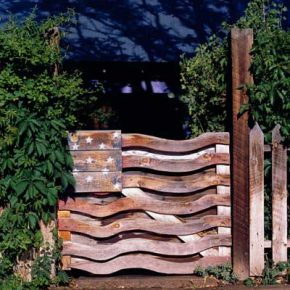 Parkin also creates contrast between the clear bright signs of some fences and the faded, peeling ones of others. This duality is evident in “Chimera” and “Pipedream,” which depict the standard-shaped “Stop” sign, one deteriorated and one in mint condition. The overriding power of nature in the extreme landscapes of the West is also depicted in the last two images, “Glory” and “Ranch,” which show aging wooden fences. 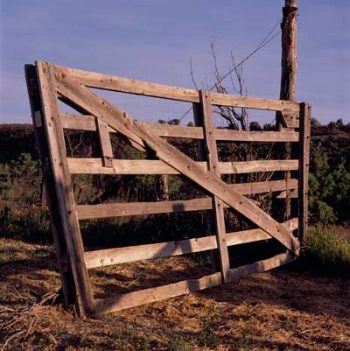 Certainly these photographs are inviting, through their bold color, composition and text. But, like any good story, these images are full of complexity that goes beyond the obvious wording. Parkin has deciphered the language of the West and told its story, the gore and the glory.

Barriers to Entry-New Photographs from Film by Brian Parkin is showing at Moab Art Works, located at 35 N. Main Street, Moab, Utah, and can be reached at (435) 259-3010 or atwww.moabartworks.com.