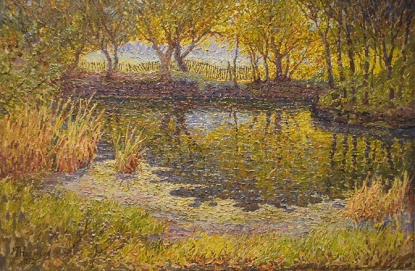 Near Sugarhouse, by J.T. Harwood, from the permanent collection of the A. Ray Olpin University Union at the University of Utah

Many consider James Tayor Harwood [1860-1940] to be the father of Utah art, so no mere column could hope to describe his life and contributions to our cultural history. It would be like sitting at the keyboard and writing a 1,500 word essay about George Washington. My first encounter with Harwood was in Dorval, Quebec in October, 1969. My first missionary assignment put me in a basement apartment where everything was cheap wood paneling, a radiator (that didn’t work) and a loan picture of Harwood’s “Come Follow Me.” This highly-impressionistic work (the original is in the central gallery at the Museum of Church History and Art) glowed. I couldn’t believe how someone could use such heavy brush strokes to convey a message. To me, the message of the art was as strong as the spiritual significance. I can’t look at the original any more without reminiscing about my cold, lonely Quebec days.

There are numerous eminent people who have demonstrated their depth of knowledge of Harwood including Bob Olpin, Vern Swanson, Will South, and James Haseltine. However, I chose to pick the brain of my very able and considerably-sharp gallery partner, Clayton Williams, who has decades of stories and details about Harwood.

For those of you who do not keep Artists of Utah at your side, here are a few background facts about Harwood before I share with you the Clayton anecdotes. Harwood, a native of Lehi, Utah, received early training from Dan Weggeland, and Alfred Lambourne, two household words in the realms of early Utah art. Excelling beyond his mentors’ capabilities, Harwood was accepted at the California School of Design in 1884 after submitting what director Virgil Williams said was “the best piece of work ever done by an applicant.” The young student’s “Bunch of Grapes” (1884) set the tone for what would become a very accomplished career. Harwood returned to Utah in 1885 and set up shop as an art teacher in Salt Lake, where he counted among his students Herman Haag, one of the French Art Missionaries. 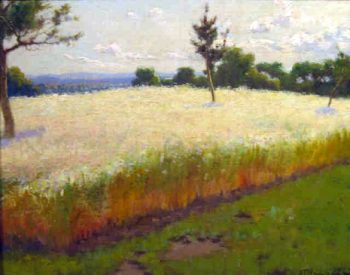 By 1886, Harwood sought what was then the ultimate training for up and coming visual artists — Paris. He studied first at the Academie Julian [a favorite destination for many Utah artists to follow], under Laurens, Bonnat, Constant, and Doucet. Following a return to Salt Lake, Harwood again traveled to Paris where he met fellow Utah art student, Harriet Richards who would soon become his wife.

Harwood, the first Utah artist to study in Paris, adhered to the strict academic style taught in the Paris academies of the time, which allowed him to create such classical paintings as “Preparation for Dinner” (1892). Later, Harwood was also accepted into the prestigious state-sponsored Ecole des Beaux-Arts concurrently with the Julian, as he continued to understand and appreciate the necessity of developing a strong drawing technique. That same training would be required of his own students later during his extensive teaching career.

In 1888-1889, Harwood corresponded with John Hafen, still in Utah, suggesting that he could live in Paris for $1,000 per year and that he should come to seek the best art instruction available. Hafen wrote a letter to George Q. Cannon of the First Presidency of the LDS Church about sponsoring him and two colleagues (JB Fairbanks, and Lorus Pratt) to travel to Paris for further training in Paris (see our December 2007 edition).

Beginning in 1903, Harwood made frequent trips to Paris to refresh himself at the fountainhead of art instruction. He was undoubtedly exposed to the progressive art movements of the time like post-impressionism, Fauvism, and cubism. In 1911, in addition to teaching privately in Salt Lake, Harwood instructed secondary students at East and West High Schools. 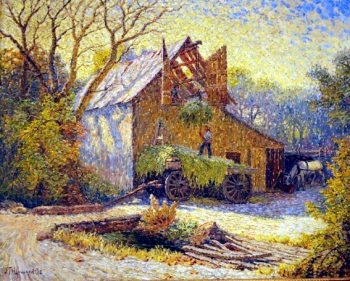 Pioneer Relic, by J.T. Harwood, from the permanent collection of the A. Ray Olpin University Union at the University of Utah

According to Clayton Williams, Harwood moved his family to California in 1920, hoping to position himself to sell more art at higher prices, not an unusual practice for talented Utah artists then and now. The move proved to be short since Harwood’s beloved “Hattie” passed away in 1922, due to complications from a goiter. For a more detailed, and tearful account of Harwood’s depression as a result of his wife’s death, see A Basket of Chips, Harwood’s autobiography of sorts.

During this painful time in Harwood’s life, the University of Utah was seeking a capable artist and art educator to head its art department. Harwood accepted the position and began a seven-year stint as the chair of the art department. During his tenure at the U, such legendary artists as Lee Greene Richards, Jack Sears, and Mabel Frazer would pass through the halls of the Department. It was Sears who said later that Harwood ” … made us draw constantly, and only the best work from a student was accepted. We would spend a whole week preparing a drawing of a ball.”

In 1929, Harwood took a sabbatical from his position at the U to marry again. His eye had caught the fancy of a young art student. Ione Godwin, 47 years his junior. Can you imagine the scandal of the time? A 70-year old department chair marrying a student young enough to be his granddaughter? The two were very much in love and two children were born to the couple, who resided on Lake Street in Salt Lake. Williams, who has lectured extensively on Harwood, remarked that the artist built a sort of lean-to in the backyard of his home where he and Ione would sleep out under the stars. It reminds me of what Bob Olpin once wrote on our research papers when my wife and I took his Utah Art Life class. “Linda: realist. Tom: romantic.” 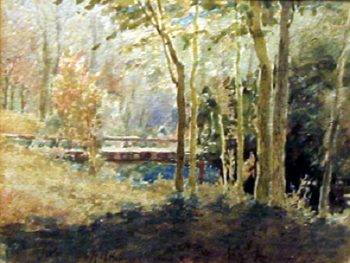 Williams also reported that all of Harwood’s paintings after his marriage to Ione bore the initials “lae” on them in inconspicuous spaces. The three letters stand for French and English words (“sort of Frenchlish”) that equate to “To loving or laughing eyes.” I was trying to find evidence in Harwood’s later paintings but quit after getting a headache. Williams said that they were Harwood’s continuous signal to Ione of his love for her.

I asked Williams what he thought Harwood’s greatest legacy was. “It is quite unusual to find an artist of the time who remained consistent in his painting, staying close to his several styles throughout his career. Harwood did that through his 80th year. He was truly the pioneer who recognized the value of academic study in Paris. He was the first of the Utah artists to go to Paris and set the bar for others to follow.” Williams also remarked that Harwood “was gifted, industrious, that is he took his gift and made the most of it, and was very moral and normal. He was far more balanced than so many other artists.” 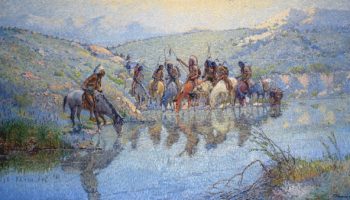 Appeal to the Great Spirit, by J.T. Harwood, from the permanent collection of the A. Ray Olpin University Union at the University of Utah

Williams admires Harwood’s work as a plein-air painter, but pointed out that Harwood also used photographs as source material for his paintings, something that likely would have been frowned upon by his instructors at the Ecole and the Julian. In 1990, Williams held a symposium about photos that had emerged [purchased by someone from an antique store for $90] that offered proof that twenty or so of the 140 photos had turned into oil paintings. Most students of the study of Harwood will readily recognize “Blowing Soap Bubbles,” an oil painting portrait of Harwood’s daughter, Ruth, blowing bubbles. Ruth was about five years old when her father painted the memorable image. A photo from the purchased collection indicates that at least part of the portrait was made from the photo. Similar photos exist that match “Footsteps in the Snow” at Liberty Park in Salt Lake (Springville Museum of Art). Another painting, “Adoration of the Ages,” can be traced to several photos of Ruth holding onto the robes of a manikin, and also a photo of a blind man, taken in Paris. Transferring images to glass plates and then projecting them on canvas has been an effective technique that was advanced by, among others, Samuel F.B. Morse. Whether or not the technique was discouraged, Harwood capitalized on it and created some of the most beautiful and valuable art to ever be produced in Utah or Paris. 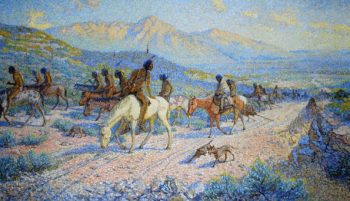 Departure of the Red Man, by J.T. Harwood, from the permanent collection of the A. Ray Olpin University Union at the University of Utah

Harwood paintings can be viewed in many local schools (East, West, Highland, U of U) where he left his mark — er — brush strokes. Stop in at the Union Ballroom next time you are on the campus and stare at the glorious and huge Harwood paintings that are elevated at the front of the room. Bring your binoculars for a good look.

Perhaps it was Leconte Stewart, a later successor to Harwood at the U, who offered one of the best descriptions of this “father of Utah art,” when he remarked, “[Harwood] was an idealist who emphasized an essential drawing foundation and craftsmanship in the development of art students.” Olpin further suggested that “that tradition was carried forward with emphasis at the U of U chairmanships of Alvin Gittins, Ed Maryon, Doug Snow, and hopefully again in the current period [referring to himself as the then current chair of the art and art history department].” 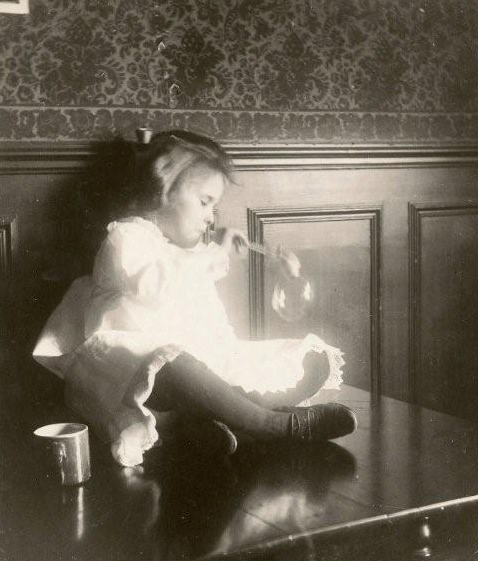