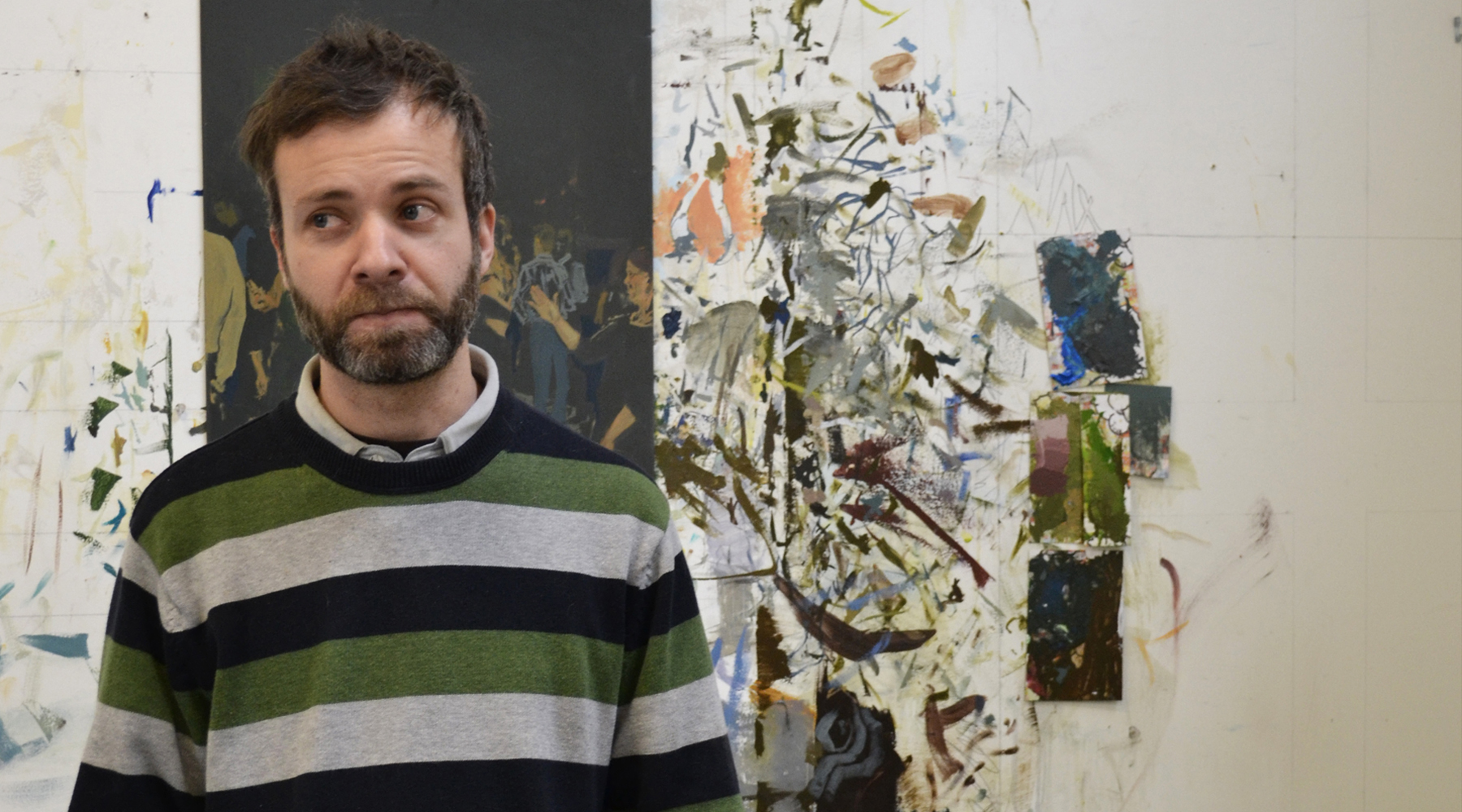 A Salt Lake City native, born in 1977, Steven Larson studied painting and drawing at the University of Utah, but he doesn’t confine himself within his degree. “I am not just a painter, that is what I am referred to as, but I play music, I write poetry, I play with language and words… everything I do is some kind of improvisation.”

Larson’s work is unique in being both abstract and figural and is charged with ineffable meaning while having a distinctive visual language. In his work, meticulous line drawings interact with boisterous brush work. Drawing and painting appear to be a form of thought manifested. His landscapes have a visual poetic quality that can be interchangeable with words. “Writing allows for a certain fluidity of expression, brainstorming specific ideas that are challenging to depict without the use of words,” he says. For Larson, words can have the same meaning as the visual; the signifiers are interchangeable and are all a part of the same vocabulary:

place bound but moved too,
not by tractors mashing, scooping,
globs of land mass transferred or traded
breaking branches, bending roots,
for needs figuring taller than the tops
of horizons lining
while workers unwind in a field behind a shed
where an ass draped in plastic is ranked
by a young boy with crutches
thrown down by something else
who thinks earthquakes are imaginative

This “visual poetry” is a means of expression connected to Larson’s drawings that those familiar with his work might recognize. It is an expressive style that functions lyrically the way his unique form of abstract expressionism does visually. 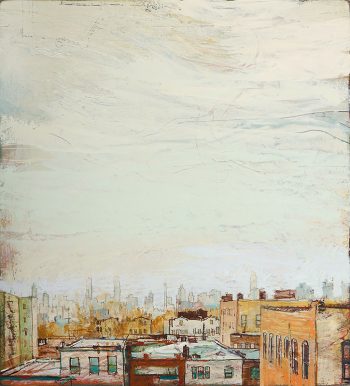 Over the past decade Larson has created a distinctive visual language that has evolved as he has experimented with various approaches and media, including found objects, monoprints, plein air painting, cityscapes, collage, and works on paper. Throughout, his work has demonstrated an interest in architecture and structure, whether he paints weathered buildings in Salt Lake, high rises in New York or Brazilian favelas. This interest manifested itself early. “I drew ghost towns when I was 8 years old, every day. I was obsessed with ghost towns. I just made them up. A whole town or a community.”

That combination of structure and imagination is something that defines the artist’s work. “I’ve been fascinated with structures, shantytowns, ruins; it’s a way to describe humanity without having to render the figure. I don’t think that consciously. It is that, and I don’t try to use it as a symbol, but that is inseparable as we all live inside of a box — there are all different sizes and shapes of boxes and it’s an extension of our lifestyle, it’s who we are. There is an open connection with classism, economics, and sense of community. Who has it better, suburbia USA or the favelas of Sao Paolo, Brazil? It is not deliberate and one-dimensional and how I feel about this part or that part of the world regarding class, I am just looking at my thoughts and recognizing what is there.” 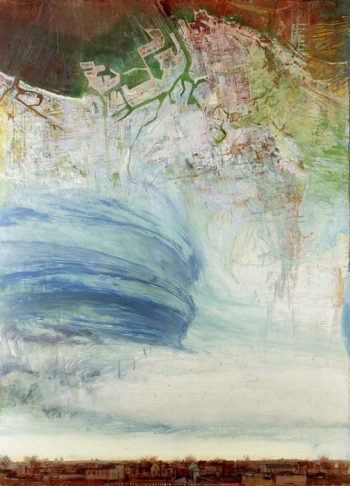 When Larson first came out of school he was painting landscapes and cityscapes. From local scenes he broadened his scope with views of larger cities like New York. In 2006 his work began to evolve, as he incorporated shifted perspectives and collaged elements, like maps. His works also began taking on more overt political themes — environmentalism, natural disasters, and war – and appeared in looser, more improvisational form, as drawings with touches of watercolor that appeared as if the artist were thinking out loud on paper.

“I want to visit impoverished communities abroad,” he says, “to absorb the visuals of shack-like structures, to learn from community members first hand, as I am fascinated with how class shapes living conditions and the contrast between suburbia in the states against the favelas in Sao Paulo, Brazil. Who has the better sense of community, who knows people 50 or 100 yards away from them? What needs for societal, social, and survival vary per given tribe, suburb, town, metropolitan city and are heavily shaped by the format of dwellings or structures and influenced by economics and cultural aspects?” Thus, for Larson, automatic articulation of structures is a way to expressively render his thoughts, a mapping of the world and of his conscious and subconscious humanity. “It’s an interaction; I am both losing and finding myself, being conscious and unconscious about what I do or say.”

In Larson’s “Summer Breeze,” a graphite and watercolor work, one feels a calming sensation in the natural ambiance and a sense of harmony in a surreal state of a melting pot of dwelling environments. A large plateau of favelas reaches far back into the mists while closer to the front is a California-style swimming pool with lounge chairs and umbrellas. A junkyard bathtub rests at the foreground left. A mist of air wafts through the palms and the leaves making the whole scene very at ease. There is nothing subversive, didactic or ironic yet the image makes an impression nonetheless and has its own language that is as equally potent. 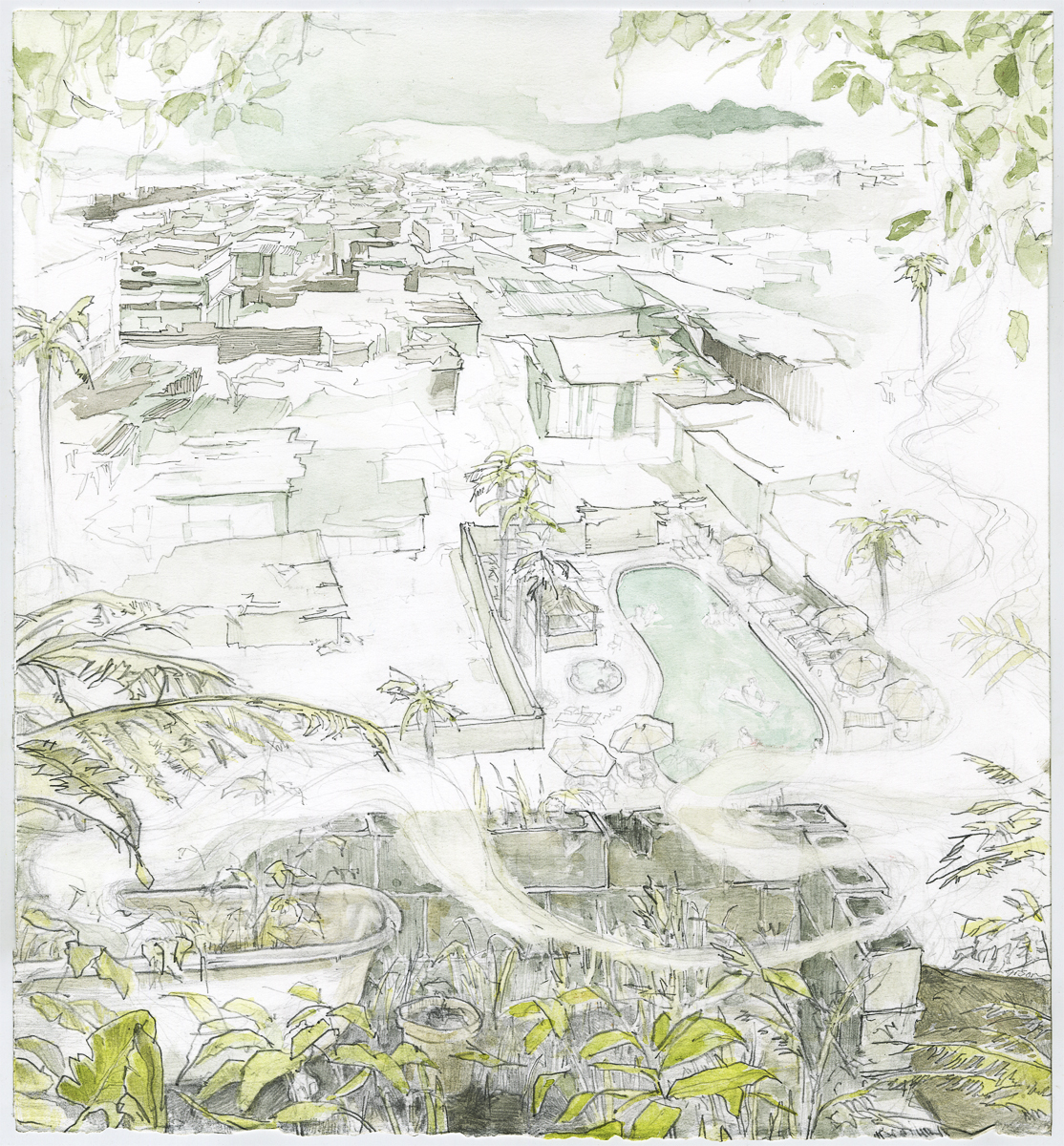 Larson’s panoramic, magnificently rendered and boldly expressive “Untitled” is a testament to his artistic vision. In this 90-inch work, an intricate fabric of mapping in miniscule and fluid detail is beautifully and fascinatingly rendered across the picture plane. The thick maze of a metropolis, with its tall skyscrapers and high-rise towers, melts into a sea of shantytowns, from which soars a looping, raised freeway that draws the eye along the plane in leaps and bounds. Hanging suspended in the sky, making the scene even more surreal, are mammoth shards of rock, beneath which the freeway winds its way through clustered favelas until both reach the border of a sea-foam green river that forms a delta. The image continues with a bayou, and towers with twisting trees dripping foliage until the scene empties into space. 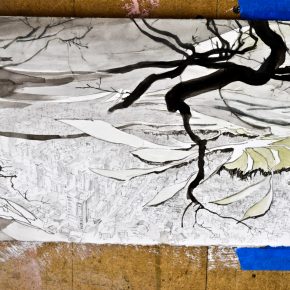 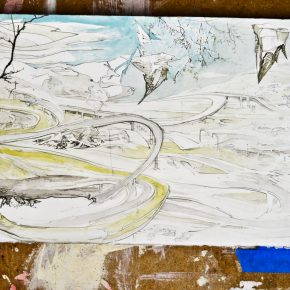 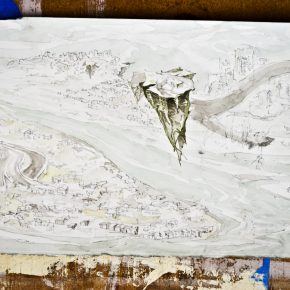 Larson — driven by his automatic rendering of what comes naturally both technically and ideologically — also demonstrates a strong emotive quality in this work. The branches of the gnarled trees reach unpredictably across the surface. The foam blue water of the sea swirls with a freshness and a pulsating momentum. The cool blue air circulates above in streams, rotating in hypnotic currents, seemingly with a mind of its own. Farther left the atmosphere gets tenser, the blues get darker, and where sky meets land heavy bursts of air and earth feel cold and powerful. What begins as branches becomes a form — a dark, twisted and bent shape — that becomes more than just a tree but seems to scream from off the paper like an alien being. Farther left is darkness, an abyss, a void that seems to suck life from the piece.In his current work Larson continues to work on paper, with drawing and watercolor, as well as small- and large-scale oil paintings. He wants to bridge elements from his drawings into the paintings and explore botanical and organic imagery fused with humor and humanitarian themes. This new work, which will be on display at Kayo Gallery later this month, is something most of his audience will not be familiar with, a departure from Larson’s traditional visual language. These works are subtler in concept, yet bolder in execution, bringing forth a greater intensity of expression. In these pieces Larson says he “pushes big strokes across a surface using objects other than brushes, calling upon the automatism of abstract expressionism, while certain areas are treated meticulously, with very small brushes.” These paintings are far more abstract, without the familiar iconography, and allow the artist to express himself with a fuller and more profound sensitivity. 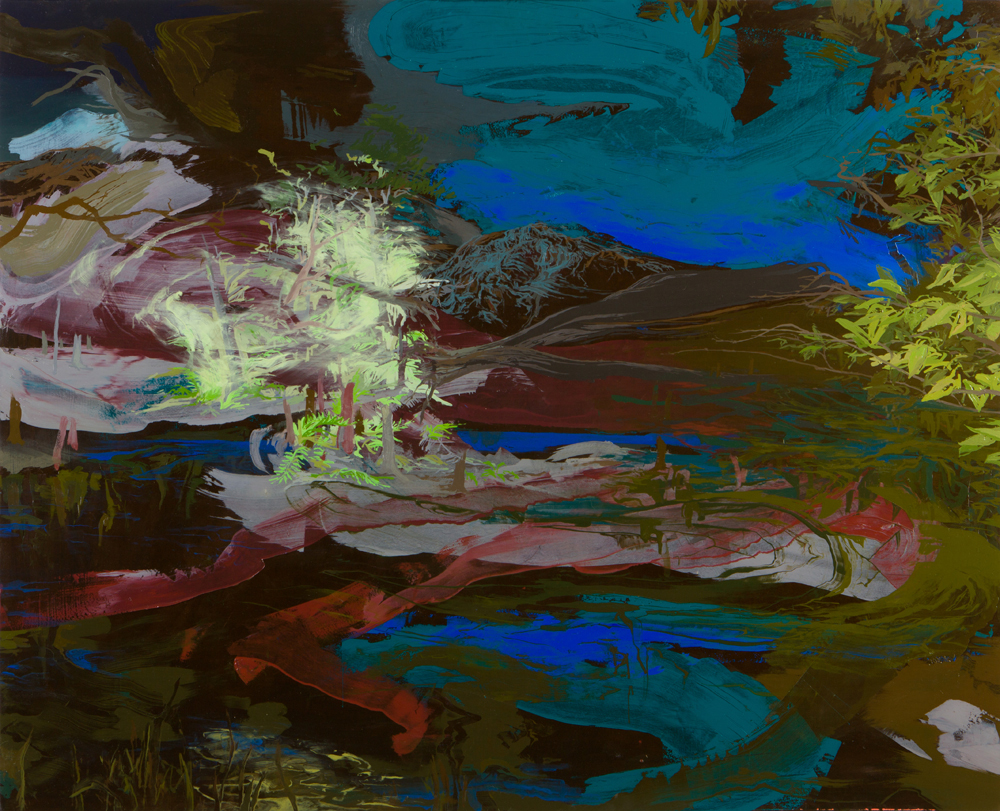 “Swamping” is a fine example, a sophisticated rendering of the artist’s expressive, more emotionally charged sensibilities. A metaphorical swamp, where bright colors collide and clash, the painting is full of heavy strokes and formidable shapes, yet all is strangely harmonious, with touches, here and there, of beautifully rendered bright green foliage. Like his drawings, worlds collide, yet the atmosphere is one of harmony. Not using the figural but the figurative, Larson limits himself, as his rendering is so automatic and comfortable. Yet he handles the brush and paint, color and composition masterfully in a result that can truly be felt and understood as a product of the artist’s untamed expressive instinct

“Painting is an old medium but is not tired,” Larson says. “It has places to go and things to do that it has not yet gone or been and I strive to discover new realms, in subject and in paint handling.” His work is dynamic, expressive and complex. His art has many aspects and layers as he as a man has many facets to his persona that make him unique as an artist and as an individual who truly utilizes to his advantage the intrinsic expressive powers of art.