ColLABorART, Artists of Utah at the Utah Arts Festival

Shawn Rossiter and Liberty Blake work on a collaborative art project inside The Leonardo.
Photo by Caitlin Blue.

ColLaborArt, a joint project with The Lab @ The Leo  aims to achieve community building and aesthetic exploration through collaborative art projects.

ColLaborArt grew out of a March 2013 residency when resident artist Shawn Rossiter invited David Habben to work with him on a large-scale pastel piece during Gallery Stroll night.

“It is rare for visual artists to collaborate,” said Liberty Blake, Art Lab manager.  “It was a dynamic process, the public stayed and watched for long periods of time- and even felt compelled to join in. They seemed fascinated by the process, in a way different from watching a solo artist at work. There is a tension and excitement, the process is a little out of control. The scale of the work, and the speed at which it came together was impressive.”

The positive response to the project encouraged us to expand the idea. Partnering with The Leonardo, we staged the first ColLaborArt during the four days of the 2013 Utah Arts Festival, during which The Leonardo was open to the festival audience. Four pairs of artists worked on individual projects: Jann Haworth and Kent Christensen created a large Pop Art piece that involved a lot of running up and down ladders, as the piece was 14’ high; Chad Crane and Zane Lancaster worked side by side on a detailed fantasy battle scene; Shawn Rossiter tackled two collaborations, the first another large scale pastel with David Habben and the second a 34′ x 4′ collage with Blake that stretched the entire length of the Art Lab. As the artists explored ways to blend their individual artistic vocabulary, they came up with new forms of visual language that they wouldn’t have developed alone.

“The Art Lab was packed with visitors daily from 10:00am to 10:00pm and the response to the event was extremely positive,” said Blake. “The project became an invaluable educational tool, enabling the public to learn about the creative process and to understand the creative possibilities in collaborative efforts”

“For the 2014 iteration of this project we would like to build on the foundation of last year’s experiment, to broaden the level of participation, and develop additional educational tools.”

For the four days the Utah Arts Festival, the project will focus on invited artist teams as they create their works in front of the Arts Festival crowd. Visitors coming over the four day span will be able to witness the progression of the work, from initial sketches to the finished products.

Access to ColLabor Art is free with admission to the Utah Arts Festival.

ColLaborArt 2014 is a partnership between The Lab@The Leo and Artists of Utah and is made possible by generous donations from the Sam and Diane Stewart Foundation and Salt Lake County’s Zoo Arts & Parks.

Throughout the run of the 2013 Utah Arts Festival, Artists of Utah organized collaborative art projects at the Art Lab at The Leonardo. 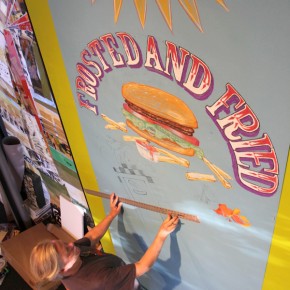 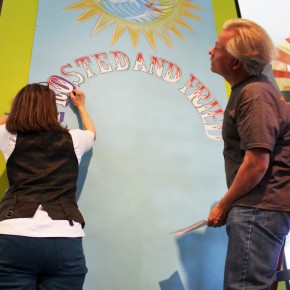 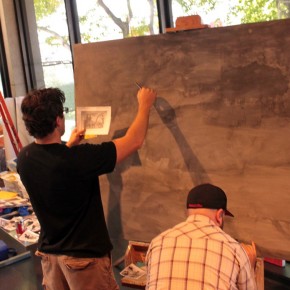 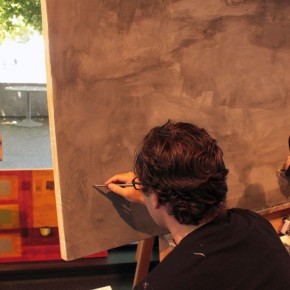 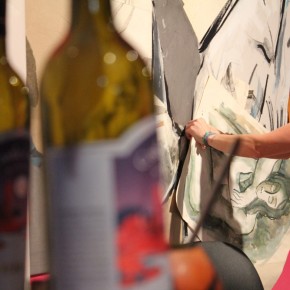 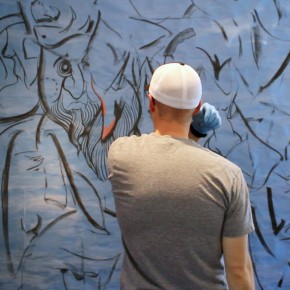 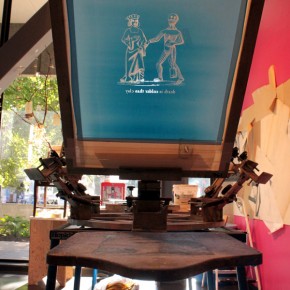 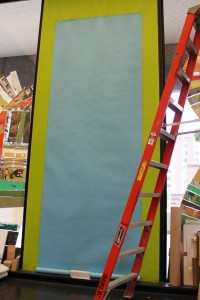 ColLABorART kicks off in The Leonardo’s Art Lab Thursday, June 20, with Jann Haworth and Kent Christensen working on the south wall. On a blue four foot stretch of paper that goes twelve feet up the wall, the pop artist powerhouses will be creating a stack of visual treats that will compete with the delicacies available outside the festival. Stop in and watch the pair beginning at noon.

On Friday, June 21 and Saturday, June 22, Chad Crane and Zane Lancaster will be taking turns working on two large canvases. Each artist will sit in front of their respective canvas, adding one element. They will then switch canvases to make an addition to the other, repeating the process until the works are complete.

On Saturday, June 22 at noon David Habben and Shawn Rossiter will begin a drawing on a nine by nine foot piece of paper using charcoal and pastel. Their original drawing at the March Gallery Stroll attracted a large audience and was the impetus for the CollaborART event at The Leo. Watch the drawing progress throughout the day as each artist transforms the other’s lines to create an embedded series of figurative and abstract elements. 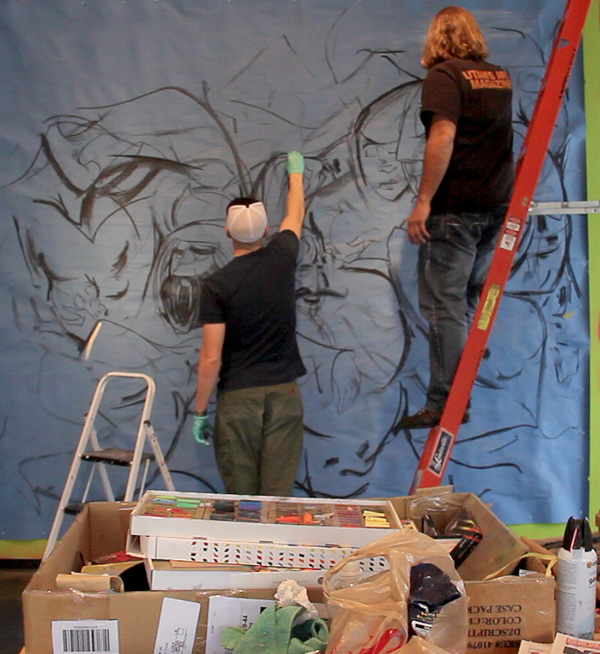 David Habben and Shawn Rossiter at work on a large-scale drawing at The Leonardo in March 2013. 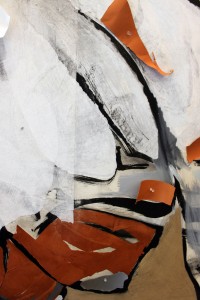 Throughout the weekend, Liberty Blake and Shawn Rossiter will be working on their long collaborative work “10 Riddles Wisely Expounded.” The artists have already begun the process of melding their two individual styles, combining expressionistic drawing and paper with layers of collage on a canvas of sheetrock that stretches 34 feet across the Leo’s gallery walls.

Want to try your hand at collaborating? Vince Johnson has organized an interactive art project that invites visiting patrons to sew their own contributions.

Liberty Blake Gallery Stroll: All June Liberty Blake has been the resident artist at the Lab at the Leo. Visit anytime during the festival and you’ll have a chance to see a collection of her newest collages. On Gallery Stroll, Friday, June 21, 6-9 pm, The Leonardo will host a reception for the artist.

In addition to snatching up a great piece of art, during the reception you’ll have the chance to get a t-shirt screened (from a design based on a Hans Holbein woodcut: bring your own shirt or buy one of the ones available). You can also play “Aesthetic Roulette”: take a stab at rearranging a series of nine collages created by Blake from the works of the late Francis Zimbeaux. Rearrange them in the orientation originally decided upon by the artist and you get to take one of them home. 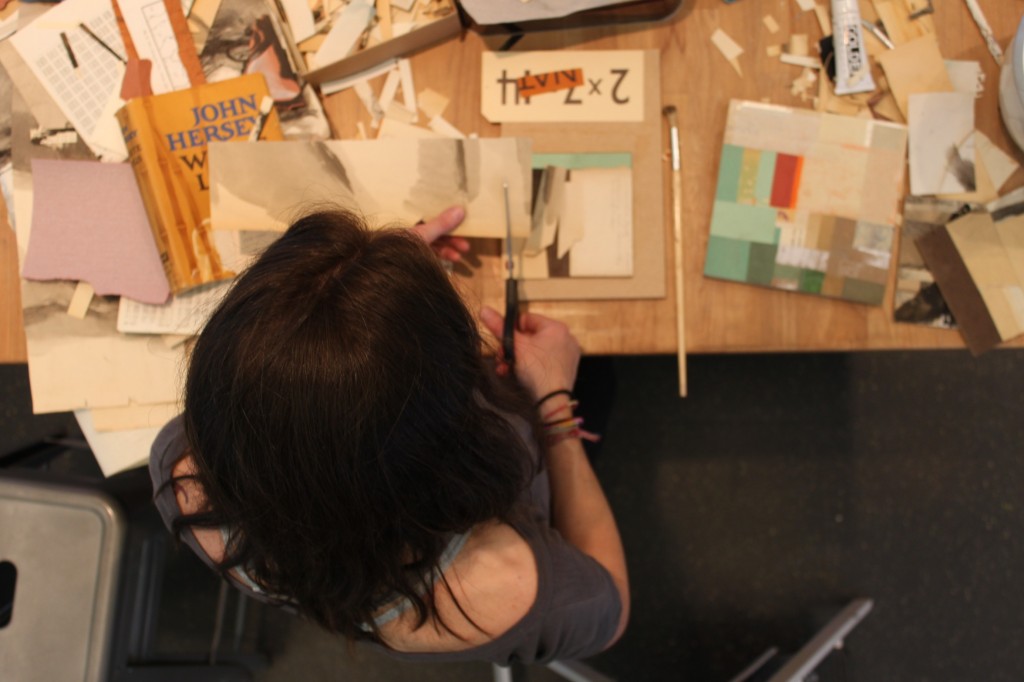 Liberty Blake at work in The Leonardo, June 2013.