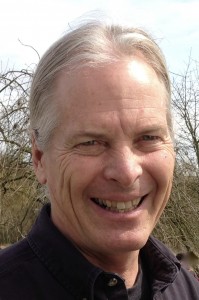 Today, 15 Bytes features Utah Valley University writer and professor Scott Abbott who here favors us with an excerpt from his Immortal for Quite Some Time, due out this month from the University of Utah Press. Of this  non-fiction work which Scott bills a “fraternal meditation,” he writes, “My brother John died of AIDS in 1991 at the age of 40. The most surprising thing I learned as I began to write about him was that you can’t describe your brother without describing yourself. And that can be uncomfortable, especially if you are a heterosexual, practicing Mormon.

“[Here, i]n fits and starts I sketch my versions of a lonely, funny, talented, hard-luck, bisexual, ex-Mormon and his ostensibly more stable brother. The former has no choice but to suffer this outing at the hands of his brother. And the latter, although he can choose what he discloses about himself, risks radical redefinition of a self constructed according to LDS guidelines by devout LDS parents.

“Wary of triumphant narratives that celebrate a writer’s courageous escape from a repressive culture, I add to my first-person account a critical female voice that questions my assertions and ridicules my rhetoric. Missing my brother, I move from the cold vision of autopsy to direct conversation during the book’s final sections.”

So curl up with your favorite cup of joe, and enjoy Scott Abbott’s work!

Incalculable Territory
excerpt from Immortal for Quite Some Time

Bags of his things lurk in the garage. They once reeked of cigarette smoke. Now they fail to retain even his most pungent odors. I’m losing him. Molecule by molecule.

I want to know him in ways I never did.

I worry about contagion.

I worry about worrying about contagion.

I turn to our notebooks, his and mine. I gather photographs and documents. I let my mind slide back. I want more than the pale patterns memory settles into. I don’t want to remember him, I want to smell his breath, thump his back, hear his voice.

I’ll have to make do with memory. My memories, not his. The memories of a brother.

In what will become our hometown, good citizens report seeing flying saucers for three days running. Between eleven and noon each day the alien craft thrill residents of this border town.

I was born seven months before aliens were sighted in Farmington. John was born fourteen months after the sightings.

I have never seen a flying saucer. Nor, to my knowledge, did John.

A little engine leaves the tracks to frolic in meadows. Wildflowers snagged in his wheels betray him. Pedagogical engineers hide in a meadow and jump up with red flags when he turns their way. He gives up frolicking, stays on the tracks, and grows into a good puller-of-trains.

I put down my Golden Book and watch boxcars loaded with fruit rattle past our little log house. In the early evening my mother leads me across the street to a warehouse. She knocks at a side door. It slides open. Through the opening she hands her warm bread and a pot of steaming pinto beans to a dark-eyed woman with a brown-skinned baby at her breast.

Pots, rings, or chase. We lay out our marble games on the playground. I drop my winnings into a bulging blue-and-white-striped bag my mother sewed from an overall leg.

I watch a girl with patent-leather shoes swing so high the chains go slack. Her shoes flash in the sun. Her black hair flies in the wind. She knows I watch her.

Our third-grade teacher has enrolled us in a reading contest. I speed through dozens of little paperbacks. My list of titles and authors grows and grows. Mrs. Sharp awards me a steel medal engraved with my name and the number of books I have read: 129.

If it weren’t for our break-neck soccer games on the school’s dirt field, I would gladly skip lunch to listen to our fifth-grade teacher read an extra chapter of Little Britches. Little Britches is tough. Determined. Good with horses. Ingenious. Saves his wages.

Standing next to the east goal post of the Hermosa Jr. High football field after practice, a fellow seventh-grader gleefully informs me that there are creatures in the world called “homaphrodites.” Incredulous, yet credulous, I recoil from those hitherto unknown, still faceless, but now named abominations: “homaphrodites.”

Regional competition between junior-high bands. I carry my clarinet, she hers. We suck our reeds to keep them moist. We hold sweaty hands, speak in low tones, wish there were no end to the day.

Escorted by Mormon leaders, our Explorer Scout troop travels to southern California. Words fail me the next Sunday when I try to describe what we saw on the beach. I cup my hands to indicate breasts, tanned breasts, enormous breasts barely restrained by tiny scraps of cloth. My Sunday-school classmates erupt. The teacher struggles to restore order, to banish the breasts.

At 4 a.m. two mornings a week I drive to a warehouse where a truck has dropped off bundles of the Albuquerque Journal. I load them into our family car, deliver them to every cafe and restaurant and motel in town, empty coins from locked tubes and fill the racks with new papers. I drop bundles at houses where paperboys still sleep and finally head home to slip back into bed for a half-hour nap before breakfast and 7 a.m. Seminary at the church.

One morning, out on the Bloomfield Highway at about 5 a.m., the black sky explodes. Hundreds of brilliant flares slash through the darkness five or ten at a time above where I stand on the empty highway next to the idling car.

Two years later John drives this same route. The $5 per morning gave us a taste of independence. What did he see in the night sky?

Late-afternoon light diffuse in the old Mormon chapel. The man standing at the pulpit intones the word of God. Sixteen-year-old boys and girls sit thigh to thigh in the back row, pass notes, play games on paper, whisper warmly into eager ears.

GENE SMITH, ORTHOPEDIC SURGEON. I have swept Dr. Smith’s parking lot, watered his shrubs, cleaned his office, transcribed his tapes, and once almost fainted while holding a basin of warm water into which he squirted fatty yellow fluid drawn through an enormous needle from deep inside a man’s sweaty knee.

Today, in the red glow of the darkroom, I pull the X-Ray film from the chemical bath and hang the sheets to drip dry. I turn on the fluorescent screen behind them.

Glistening reproductions of Claudia Cannon’s spine. The knobbed line curves gracefully from the delicate vertebrae of her neck down to where it disappears between the bright wings of her hips.

The bright wings of her hips.

I trace the ghostly scoliostic curve. The line deviates suggestively from the strictly vertical. I study the dim arcs of ribs that frame her spine, the cunningly articulated vertebrae. I picture Claudia in the next room, naked under the examination gown. The images arouse me, confuse me. I’m feeling something like what I’ve learned to distinguish as the fire of the Holy Ghost. I worship these pale images. 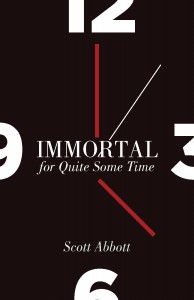 Scott Abbott is Professor of Humanities, Philosophy, and Integrated Studies at Utah Valley University. Books range from literary criticism (Fictions of Freemasonry: Freemasonry and the German Novel) to literary travel narrative (Repetitions and Vampires & A Reasonable Dictionary, with Žarko Radaković) and to personal essay (Wild Rides and Wild flowers: Philosophy and Botany with Bikes, with Sam Rushforth). He has published art, literary, and jazz criticism and reviews and has translated several books from the German, most notably works by the Austrian writer Peter Handke. With his wife, historian Lyn Bennett, he is just finishing a book about how barbed wire was given meaning in late nineteenth-century advertising and then in literature of the twentieth and twenty-first centuries (“It was a nun they say invented barbed wire.” James Joyce). You can read Abbott’s blog, The Goalie’s Anxiety here.