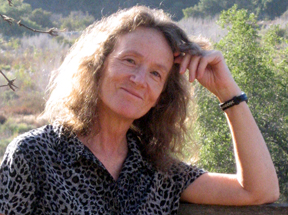 SUNDAY BLOG READ
is your glimpse into the working minds and hearts of Utah’s literary writers. At least once a month, 15 Bytes offers works-in-progress and / or recently published work by some of the state’s most celebrated and promising writers of fiction, poetry, literary non-fiction and memoir.

Today, 15 Bytes features Utah native Zoe Murdock who provides excerpts from her new novel, Man in the Mirror: A man finding himself as he loses himself to Alzheimer’s (H.O.T. Press, 2016). The book tells the complex story that follows the adventures and heartaches of Aaron Young as he attempts to keep his freedom and his feeling of self-worth as he descends into Alzheimer’s. As you can see from the excerpts, this is not your standard story about Alzheimer’s.

So curl up with your favorite cup of joe, and enjoy the work of Zoe Murdock!

By the time Aaron got home from the cemetery, the rain was coming down even harder. Not wanting Laura’s poems to get wet, he left the binder in the truck and made a mad dash for the house. He ran through the rooms opening all the windows. Then he went and stood in front of the living room window feeling exhilarated by the storm. It took him back to those drenching monsoon rains in India when the naked young kids would run out into the streets to play in the rain and the mud, twirling around with their arms in the air like those whirling dervishes he’d seen when he was over there during the war. He felt like doing something like that now. Something outrageous and free.

Tearing off his wet clothes, he raced outside and ran barefoot across the lawn. He turned his face to the sky and opened his mouth to the downpour, like a man dying of thirst. Then he held his arms out and spun around like a dervish, going faster and faster until he could see the water flying off his fingertips. Pretty soon, his head was reeling, and he was gasping for breath. He sank to the ground and lay there feeling the cool slick wetness of the grass on his back.

He stayed that way until it suddenly occurred to him that the neighbors up on the hill might be able to see him. The idea of them sitting up there watching the crazy ol’ naked man lying in the rain got him laughing so hard his stomach started to ache. Then, suddenly, he was crying, and there was a loud wailing sound that he knew must be coming from him. It sounded just like that terrible wailing he’d done after Laura died and he realized how utterly alone he was.

The sign to Hurricane was right up ahead. Aaron slowed the truck and pulled to the side of the road, trying to sort out his feelings. This crazy homeless hitchhiker had almost got him killed, so why was he so desperate to take him out to his special place in the desert. It didn’t make sense. He’d be better off without him.

He tried to convince himself, but the truth was, he was fed up with being alone. He wanted to share something with another person, even if it was a man full of demons. “Look, Daniel, I wish you’d give that hot springs a try.”

“I don’t get it. You think you’re gonna get me all fixed up with some kind of magic water?”

Aaron shrugged. “It couldn’t hurt, could it? The hot springs aren’t far, just over by my place.”

Daniel took out a cigarette. He lit it and seemed to consider the plan. “Does it cost anything? I don’t have any money, you know.”

Aaron felt encouraged. “No, no. You don’t need money. It’s in the middle of nowhere. We could camp out on my property and—”

Daniel’s smoke hit Aaron in the face, and before he could stop himself, he coughed and said, “I thought I told you to breathe that poison out the window.” Immediately, he wished he hadn’t said anything, but the smoke really bothered his eyes.

Daniel flapped his hands at the smoke. “Oh, shit. I forgot.”

Aaron sighed. “And could you please stop cussin’.” He was feeling worn out and defeated. Maybe he should just forget the whole thing.

Daniel blew up. “You’re crazy, man. You’ve been pissed off at me since I got in your truck, and you still are, but for some reason you want me to stay around. I don’t get it.”

Aaron shrugged and smiled sheepishly. “I don’t get it either. Maybe I’m as crazy as you are.”

Daniel flipped his cigarette out the window, and they eyed each other in silence until Daniel finally said, “Well, okay. I guess it won’t hurt if I get to Saint George a few days later than I planned.”

Aaron slapped the steering wheel. “That’s great. I’m sure you won’t regret it.”

Daniel raised an eyebrow. “Yeah, but maybe you will.”

Aaron got to Beaver, and decided to stop for gas. As he was headed back to the freeway, he saw a van pull over and drop off a young woman near the on-ramp. Something about her rainbow colored clothes caught his eye. She was carrying a big camouflage duffel bag that looked a lot like the green duffel bag he had when he was in the service, only this one was blue with white splotches.

As the van pulled away, the girl dropped her big duffel bag at the side of the road and stuck out her thumb. So she was a hitchhiker, huh? Aaron didn’t usually see girls out on the road and never one this young. He decided he’d better pick her up before someone else got a hold of her.

He pulled his truck alongside her and said, “Are you going my way, young lady?”

She flashed him a pretty smile. “I don’t know. Which way are you going?”

“Wow. That’s so amazing. That’s exactly where I’m going.” She bobbled her head, and that set her mass of crazy gnarled braids bouncing in all directions. It was a peculiar hairdo, but it looked good on her.

He got out and helped put her bag in the back of the truck next to his tools. She thanked him and gave his truck a little pat. “You know, I really love trucks like this. Is it an antique?”

He wondered if she was really asking if he was an antique, but there wasn’t a hint of meanness in her pretty face. “It’s about . . . uh, maybe twelve years. Does that make it an antique?”

She shrugged. “I don’t know, but it’s a really cool truck. I just love blue.”

That was nice. Laura loved blue too. And there was something else about the girl that reminded him of Laura. Not her appearance, but the way she looked at him, meeting his eyes straight on with her shiny green eyes, showing a lot of interest in him like his Laura used to do . . . back when she was young.

The girl cocked her head to one side, and smiled. “So . . . do you think we should get going now?”

“Oh, sorry, I was thinking about . . . something.” He opened the passenger door for her to get in, then he ran around and got in himself.

When he was up to speed on the highway, he glanced over and said, “Looks like you’re goin’ somewhere for quite a while.”

“How’d you know that? Are you psychic?”

She giggled. “Oh, yeah, Jigger says it shows my deep attachment to the material world. He says I’m like a turtle, destined to always carry everything on my back. But Honeysuckle doesn’t agree. She says it’s just an expression of my pride, and everybody’s got that, so I shouldn’t let it worry me.”

She raised her shoulders and let them drop before she started going again. “I tried to follow Seth’s advice, you know, to wean myself from my material attachments, but it got to be winter, and I almost froze to death running around without any clothes.”

Aaron glanced at her and then quickly back at the road. “You did that?”

“Well, it was a dare. From Jigger. I guess he wanted to see if I would do it.” She shook her head, wobbling her dark gnarled braids. “Well, I couldn’t do it for very long. I like my clothes. And I like being warm.” She pulled her jacket more tightly around her and sighed. “I’m so needy, sometimes I wonder if I’m ever going to reach nirvana. Do you think that’s bad?”

He scratched his head and shrugged. He didn’t have a clue what she was talking about.

“I mean, do you think it’s keeping me from being my true self? Guru Bara Bhai said we can only know our true self when we’re free from our materialistic attachments.”

Aaron stared straight ahead at the white lines flashing by on the highway as he tried to figure out her words. She seemed to be speaking English, so why was it so baffling?

From the corner of his eye, he could see her hands flying like birds as she talked, and her braids were jiggling again and making a kind of clacking sound. He glanced over to see what it was. No, it wasn’t the braids clacking, it was those colorful beads she had woven into the braids. Small red and blue and purple beads. They made a sound sort of like wind chimes clacking in the breeze.

He glanced over again and realized she didn’t have a bit of makeup on. None of that black goop around her eyes like a lot of young girls wore. No rosy red on her cheeks. She was just a pure natural beauty, like Eve in the Garden of Eden, the way God meant her to be. He liked that. 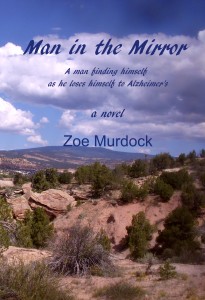 Zoe Murdock studied creative writing in the master’s program at the University of Utah. She is a native of Utah, which is the setting for her two novels, Torn by God: A Family’s Struggle with Polygamy and Man in the Mirror: A man finding himself as he loses himself to Alzheimer’s. She currently lives in Ojai, California where she and her husband, Everett E. “Doc” Murdock, teach an on-going advanced fiction writing workshop. She has been a featured writer at Ojai WordFest and is co-editor of the FictionWeek Literary Review. You can reach her author’s page on Amazon here.

Tagged as: Man in the Mirror:A man finding himself as he loses himself to Alzheimer's, Zoe Murdock