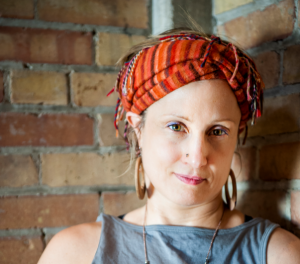 SUNDAY BLOG READ, a glimpse into the working minds and hearts of Utah’s literary writers.

Today, fiction writer April Wilder becomes number eight of  this esteemed group, each on their own individual track toward literary distinction.

Wilder shares here an excerpt from a novella, forthcoming in her book of short fiction titled This Is Not An Accident (January, 2014; Viking/Penguin Press).

Outside Winnemucca were the mosquitoes. Russ was driving with Eckhart in the passenger seat watching the air around the car seem to fill with wiring, or wiry webbing. There was a nick on the windshield, a handful of nicks—then across the glass a sheet of bursting mosquitoes unfurled like rain, one of those hard sudden showers that seems to rip in from the future, the one you know is coming. Russ slammed to a stop right there on I-80 and they sat in Russ’s girlfriend Jackie’s truck. They sat, they listened—plat. Plat-plat-plat—they stared into the outpouring and it did seem, at times, as though they were staring directly into the source, as into a turned-on shower head, but there was no one place.

At some point Russ asked if mosquitoes were one of the plagues.

“There are gnats,” Eckhart said. “And flies. I’m not sure about mosquitoes.” Personally Eckhart was wavering on whether they could be mosquitoes at all, a swarm this dense and deep, miles in every direction. If for some reason they had to step outside of the car, it seemed to Eckhart they would have no choice but to inhale mosquitoes in order to get air into their lungs.

Russ looked over and said, “It’s you they’ve come for. It’s you doing this.”

It was well past three a.m. and they were nowhere near Salt Lake City, their destination, though their new immediate aim was getting out of Nevada in Russ’s girlfriend’s Ranger, since there was some fuckwit loose on I-80 in the same car as theirs—same model, make, color, everything—who’d tried to rob a casino earlier that night. Twice now Nevada HP had pulled Russ and Eckhart over by mistake; with shotguns trained, all business, on the sides of their respective forward-facing skulls they had been instructed not to move, the safeties off, while Dispatch tried to convince the officers they had the wrong guys. But we’ve already got these two, they seemed to want to say, why can’t we keep these two?

They’d driven 650 miles from Oceanside, en route to Salt Lake, Russ’s current home, 350 miles farther east. Initially Russ had driven down just to visit, but after taking in Eckhart’s surroundings—the three-foot bong, the lesser-foot but still overlarge other bong, the dying plants, the dead plants stuffed in the trash, the trash bags lined up by the door, the 7UP can that had been dropped and left rolling in the spill, and as a tipping point, the physics book Eckhart had been copying out longhand—after fully processing the scene, Russ’s “visit” turned into his ordering Eckhart to pack, saying, “I’m getting you out of here before you smoke yourself. We stop for sirens, blackjack, and gas. That’s it.”

What had happened was that Eckhart, in the wake (following the wake) of his father’s death, had taken a gig house- and dog-sitting for a marine shipping out to Iraq—walk the dog, water the flowers and plants—that was only supposed to last a month. Like the war, one month turned into two, which turned into a year, and instead of looking for work, in what was basically the opposite of looking for work, Eckhart spent more and more time with the neighbor Curtis, debating the virtues of working versus not working. When Russ drove down, it’d been closing in on two years that Eckhart had lived in the marine’s house. Inwardly he’d begun to think of himself as or current resident, like it said on the mail. More and more his days were riddled with more episodes resembling déjà vu that were in fact Eckhart or Curtis or Brutus exactly repeating himself in gesture or word (“It’s like everyone’s afraid of dying alone, but what you mean by alone? What if there’s a nurse in the room?”).

For fifteen miles they nosed along with mosquitoes pouring out of the sky, the stream steady and meaty and thick. Then, near the end of the swarm, the mosquitoes—the fattened calves hanging back—started spilling motherfucking blood. Russ jerked flat against his seat when the heavy ones hit, and it was real blood they’d sucked out of something, so it was like the windshield was a living thing being shot up with machine-gun fire, with Russ and Eckhart watching from inside. When the buildup got bad, Eckhart pulled on two jackets and wrapped a shirt around his head and reached into the onslaught and doused the windshield with water, then with the Fat Tire beer Russ was smuggling back for friends who couldn’t get it full strength in Utah. Inside the cab, Russ cranked Christian metal because it was the only station that came in, and because it was the right thing to do.

They hit the salt flats at dawn. The sun was rising but hadn’t yet breached the far mountains, which were a ghostly Weimaraner-eye gray. On either side of the highway reached an endless white plain of what looked like ground-down chalk, with drifts and opalescent swirls rising and spiraling over the surface. Russ flipped his visor down and pulled a lever on the side of his seat, scooting all the way back in its track. “You aren’t going to believe this place in about ten minutes,” he said.

He meant the sun hitting the salt, the salt illuminating the white expanse like every diamond from every broken engagement spilled on white velvet, with puffs like out-breaths drifting sideways, pristine and primal, and fog spilling over the far cinnamon-colored mountains, their folds like elephants skin.

They were sun-sick ten miles in. Eckhart clamped his T-shirt in the rolled-up window, leaning into the sliver of shade. If he’d heard of the salt flats, he hadn’t bothered to form an image of them, and the breach between his indifference and the humbling lengths and heights made him think he would pay for not being more curious about the place. 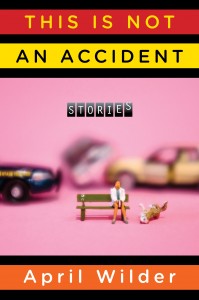 April Wilder holds a BS in math/actuarial science from UCLA; an MFA in fiction from University of Montana, Missoula, and a PhD in Literature/Creative Writing from the University of Utah. She is a former fiction fellow from the Wisconsin Institute for Creative Writing. Her story collection, This Is Not An Accident, is forthcoming with Viking/Penguin Press and she is now at work on a novel, I Think About You All The Time, Starting Tomorrow. She is grateful for the generous support of the University of Utah and its community.

Tagged as: April Wilder, novella, This is Not an Accident, You're That Guy