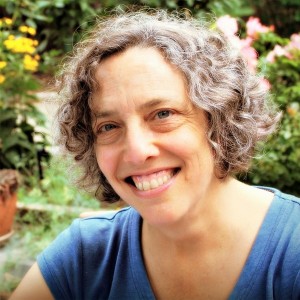 So curl up with your favorite cup of joe and enjoy the work of Jacqueline Osherow!

Which is the mirror, field or sky?

These silver-purple clouds or purple lupines

in endless sagebrush, gray on silver-gray?

And what’s that between them? Is that my

reflection? I should move before it rains.

But which is mirror? Is that field or sky

gazing at her likeness, lazily

touching up the purple imperfections

Or are they in cahoots?   See? they multiply:

each redoubling the other’s sovereignty

across their spectrum’s frugal variations:

purple to silver, silver to gray.

What a pity I’m in the way.

But I flatter myself. The clouds and lupines

don’t even see me, just field and sky

White on White
after Kasimir Malevich

one more aesthetic incarnation
of that swindled emperor, naked again,

mixed for rich and lasting color with albumen)
could be converted into pure emotion,

to make the ephemeral hold still
alongside the godly, the impalpable.

anywhere at all, encompass anything?
If the world failed us, at least a painting

might offer us its aggregate of rapture.
I had a stake in this, longed to capture

a bit of it myself (though my materials
would be more modest, words instead of jewels)

or at least exhaust myself in the attempt;
I was a seasoned dreamer and I dreamt,

which sustained me for quite a number of years.
But even the most stubborn of dreamers

is forced to notice, sooner or later,
that the world understands itself without her

albeit flattering intrusion
and it’s a meager place once illusion

in all its glory is exposed as sham.
Besides, I’ve squandered poem after poem.

Just think of all the treasure I’ve left stranded,
uncultivated, the unattended

but manifest allegiances in things,
how a presence, of its own accord, sings

right within my own field of vision
and I always fail to take it down:

the color of their fur and not the snow)
or a June hike—what?—fifteen years ago,

the mountainside a visual haiku:
five mountain goats on the last patch of snow

and I would leave them there, forgotten.
That is, until, by accident I wandered in-

To the wrong room at MOMA, turned around
to a white square askew on a white background

and there were my mountain goats on snow.
Kasimir Malevich had seen them too,

how white craves white, how what’s askew
yearns for some congenial milieu

where it can lose itself, disappear.
Those stunning ermine that snowless year

were neon on the gold leaves’ makeshift carpets,
thrilling to witness, but ideal targets

for even the most dull-eyed predator.
Better to secure a sound white square

however unremarkable, unsubtle.
A person has to settle for what’s possible.

A white square on a white background, askew.
Five mountain goats on the last patch of snow.

Even now, I can’t hear the organ intro
to Percy Sledge’s sultry when a man
loves a woman without that afternoon
returning full force: it’s on the radio —
you’ re painting? plastering? the little bedroom
and I’m giant pregnant reading Middlemarch
for my PhD exams on the glassed-in porch —
and suddenly you crank up the volume
until the entire house begins to shake.
Don’t tell me there’s no such thing as happiness.
You racing down the stairs, ecstatic,
shouting listen to this! listen to this!
your whole heart audible, mine pumping fast.
We were young, infallible. It wouldn’t last. 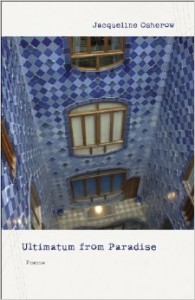 Jacqueline Osherow is the author of seven collections of poetry, most recently Ultimatum from Paradise (LSU Press, 2014). She’s received grants from the John Simon Guggenheim Foundation, the National Endowment for the Arts, the Ingram Merrill Foundation and the Witter Bynner Prize from the American Academy and Institute of Arts and Letters and a number of prizes from the Poetry Society of America. Her poems have appeared in many magazines, journals and anthologies, including The New Yorker, The Paris Review, America Poetry Review, the Wadsworth Anthology of Poetry, The Longman Anthology of Poetry , Best American Poetry and The Norton Anthology of Jewish-American Literature. She’s Distinguished Professor of English at the University of Utah.