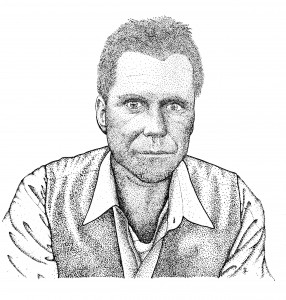 They planned to visit Madrid, and beyond Spain the whole of Europe. But after arriving at the beachside youth hostel in La Barceloneta? They knew they’d go broke if they ever left. And they did go broke. And they did leave. But not before extending their trip. Twice.

First Michael conned his parents into wiring five hundred dollars. He’d been living on hard rolls and scant cheese for weeks. Dozens of hangovers later, Nick called his mom. He’d just spent a night in the ER hooked up to an IV for food poisoning from anglerfish tail with Iberian Parmentier. He didn’t intend to ask for money any more than he planned to yak away the yellow night or dry heave until morning but some things aren’t of our choosing, he concluded with condescension.

Nick flashed Michael a thumbs up. Another Western Union dispensation. A breeze swept a napkin off their café table. Its edges flapped like wings.

The walls of their second-story room at the hostel were covered with the vandalism of errant youth: crude sketches, polyglot inscriptions, illegible signatures, dates older than their age. Against one wall stood bunks with bleach-white sheets. Against another, a desk and on that desk scribble and above that scribble a window and through that window the sea, placid or cauldronic depending on the dreamer.

Michael and Nick took turns straddling the window, an Estrella in one hand and binoculars in the other. It only took a moment to spot some bare-chested woman lying on her back with feet in the sand.

Art and the urban sea.

They were twenty then.

Faded. Michael stepped out of his hotel in a dark blue suit. Instead of a backpack, he held a briefcase. Instead of binoculars, a computer. Long shadows tattooed the busy boulevard, and Michael thought about how he and Nick had marked themselves for a lifetime. Michael covered his tattoo, a semi-circular black band, with a platinum-plated watch. Nick’s tattoo was semi-circular in the opposite direction. Two halves of a fraternal whole.

There was a time when the ink gave Michael a sense of invincibility. Or was this feeling merely an awareness of his youth? He wondered about how things change. His tattoo, once representative of hope and single-mindedness, now struck him with a sense of shame.

What significance did the mark hold for Nick after so many years? Did his old friend hide the band, alter the story of its origin, or tell it like it happened? Does the past hold any certainty or is it merely as we choose to remember?

After getting the tattoo, Michael and Nick sat at a bar to write and to drink and to talk about being writers and to list all the writers who drank and to hold their wrists together and revel in their power over symbols. Maybe that was it. Once, Michael was in control. Now, although he enjoyed a degree of financial security, he felt less stable than when he tramped the streets and wrote on walls.

Michael remembered how Nick would ramble about how fortunate they were to be friends in a world so hostile toward artists. He listened with pride before raising a bottle to his best friend, the greatest poet of his generation. Nick, overwhelmed by hubris, would nod while acknowledging Michael’s firm grasp of “the” language.

The more they drank, the better writers they perceived themselves as being. During early morning’s hangover, it was all a bunch of dross. But by early afternoon, their words were chock full of elegance and insight. Nick maundered on about how obscurity wouldn’t be such a damnable proposition if it weren’t for the damnable mediocrity that receives so much attention.

Michael and Nick knew they could sucker their folks once but to try and dupe them again was a suckers-only game. After more than three months, two dozen poems, a notebook of ephemera composed using the Surrealist method of exquisite corpse, 50 litres of red wine, a substantial taxonomy of nipples, hundreds of half-empty beer bottles, and countless additions to the youth hostel’s wall, they flew home.

They pledged to learn Spanish and return to Barcelona where they would drink and write great poems in English about breasts and beer and the sea. They told stories of their experience. Like the time Nick ridiculed those pastel painters for lacking the linguistic harmonies essential to the holiest of creation. After all, doesn’t The First Book of Moses say that God said, “Let there be light,” and by so saying, make day?

How superior to painters writers are, Michael and Nick agreed before agreeing on other such irrefutabilities. Like how Gaudi was copasetic because he spent years decorating spires that no one but angels could see. Like how they were brothers. More brothers than brothers. Like how there is family, and La Familia.

They declared a vow to poverty. They’d return to Barcelona and dedicate their lives to art. They never did return, but here now Michael stood in the orange morning of Catalonia in a dark blue suit and light blue shirt. He straightened his tie in an orange window that reflected these blues–the orange window of the white bank where he was assigned to install the new software.

Although Michael threatened to study literature, he graduated with a degree in finance and took a job with a firm that specialized in banking solutions. Nick nagged him about the oaths they’d made to irresponsibility. As Michael settled into his career, he began to believe that his days in Spain were the end of youthful wanderlust – the necessary completion of an immature phase that one naturally abandons for adulthood.

“But what about La Barceloneta?” Nick wanted to know. How did Michael expect to improve his writing if he wasn’t willing to starve for it?

Nick never completed his core courses. Instead, he drank and wrote poems and maligned Michael’s betrayal of their friendship. Truth: With every responsible decision, Michael felt his interest in ideals once so important – slip. Once they shared a special loneliness but the choices each made put distance between them. Nick cited the Nicomachean Ethics as a sufficient argument against taxation. Michael bitched a lot, but he paid them.

Disagreements are difficult. Lifestyles are irreconcilable. Spiteful and disappointed, Michael was hopeful. Surely Nick’s failure to conform accompanied unnamable personal problems. Then again, had Nick really paid the price for his decisions like Michael felt he’d paid for his?

There was a time before tiered dividends when Michael had been someone great. Or at least, for a moment, he enjoyed that great consensus and what does actual greatness matter when two sides agree? As their friendship deteriorated, Michael found it difficult to sustain that special idea of himself, as if his self-perception was reliant on Nick’s recognition. With only angels looking, his detail vanished.

Michael turned away from his blur and trailed back across the street. He called the bank to apologize. He was vomitously ill from anglerfish tail with Iberian Parmentier. He’d extend his trip to install the software, but not today. He unknotted his tie, exchanged his dress shoes for sneakers, pulled Nick’s book of poems from his suitcase, and left his hotel room for the second time.

The sun shifted into and out of clouds. Michael didn’t notice the light or how clouds moved to darken the day, or how their shape-shifting brightened his stroll. He walked up Avegunda Diagonal to Passeig de Gràcia, down the busy boulevard to Plaça Catalunya, and into the Eixample District where he came to a courtyard behind La Sagrada Familia. He sat on the ground with his back toward a wall and read.

The University Press described Nick’s verse as “illuminating.” For years, Michael had prepared himself for the smug satisfaction one enjoys at the expense of old friends whose decisions don’t pan out. But success?

Nick’s poems, rich in cadence and neologism, were vaulted and circuitous like Gaudi’s cathedral. Michael wrote in the margin. He underlined phrases. He drew arrows between images while searching for clues of himself. There were none.

Michael walked to La Barceloneta. There were towels and on those towels topless women with copper bellies. He zigzagged through them to the sea, unfastened his watch and rolled Nick’s book into a tube. He pushed one end through the wristband. The book widened, tightening against the metal band like a spire. Michael raised his arm and aimed. The watch splashed a wave. The wave splashed the shore. Nick’s book bobbed in the current, keeping the watch afloat. Another wave crashed. The contraption passed beneath foam.

Calvin Haul is a University of Utah graduate. His work has appeared in Context South, Caveat Lector, Yefief, Girls with Insurance, and other publications. He was shortlisted for Glimmer Train’s December 2012 Fiction Open. His story “List” is forthcoming in the 2013 issue of MAYDAY magazine, a publication by New American Press. He has two daughters, Eleanor and Katherine.