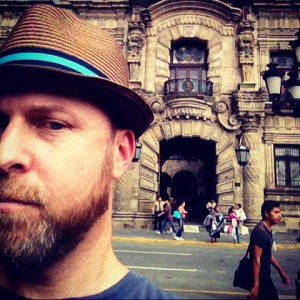 Today, 15 Bytes features Salt Lake City-based Raphael Dagold who offers here a selection of poems of which the first two appear in his 2014 collection Bastard Heart, a finalist for this year’s 15 Bytes Book Award. He will be reading with other finalists at the Utah Humanities Book Festival Monday October 5, at Weller Book Works. You can read the 15 Bytes interview of him here. He will also be reading with Lisa Fay Coutley Oct. 7 at King’s English Bookshop.

So curl up with your favorite cup of joe and enjoy the work of Raphael!

All night rain made its bells on the streets,
people tossed under sheets washed in fanned air and murmuring televisons,
the broken fountains of Patterson Park filled up from the sky.

I was awake thinking of staying here.
I imagine my body has its reasons for cohesion,
my mind, its will for veins cushioned by the same skin
as always, like Baltimore spinning its tattoo,
sharp pricks of dark and light, in flowering tracks:

The searchlight of morning, white in rainwater’s hovering steam,
sparks bottlecaps and safety glass tamped into the street,
casts shadows chasing old women’s brooms on their marble steps.
On Lombard the Polish marquee exclaims another musical.
Flooded markets hawk fishermen’s jewels on ice.
Roaches come like forest beetles on wet pavement
next to rainbows swirling on asphalt with its lifted gasoline,
a blue El Camino slicks by hauling a rebuilt black v-8 in back,
soft brick buildings look down from their measurable heights.

In a tree, blackbirds—a swarm, an open hive,
each black lightness its own small chamber:
The birds are not crows and are not death

and there are hundreds of them in the dryness,
quick late-summer breathing back at the leaves
they’re hungry doubles of, wet shades of oxygen

gathering, a gather and a making of a flock
from a tree, a leaf a wing, two a bird, three a bird
with a beak and a flutter and a lack

of patience, sun up and a hot sheen
already, air heated and moving in quick drifts
shaking the leaves, the leaves are strange here,

so many of them shaking but still silent,
their sound is under the sound of the birds
loud in the light, light shooting clean

from one hillside through to the next, pale,
before it’s gone and saturated everything,
light strung to a key the birds play, each of the hundred,

the birds are so loud it’s easy to think this,
that the very light is sound:
Then one of them goes. No mission. No scout.

Just goes, comes back, like that, some more go
to land in the field below the tips of grain
so a haze begins, elastic, a stream of one body

from the tree like a cell’s separation,
no flat, no hollow, no more,
you’d think, could fit where they all go

to eat, is all, all the flock’s pieces
beating their wings for the ground.
It is almost. It is almost too much

for the field to carry where they’ve described
themselves, written their own low arcs,
rippling and settling for each new two or three

a is for Annie crying at school,
x the Xylophone missing mallets,
c for Counting while scuffing linoleum,
g is the Gag-rule at nap time,
r Rushes up through the throat,
f the bad word left hanging on climbing-bars,
o in the Office waiting its turn,
s the hiss Snakes don’t make,
e stands for Edward who Everyone Envies,
k is for Kickball aimed always at Edward,
u is for Useful, as in make yourself,
b for Brain, as in use your,
i looks so straight but is really Invisible,
v Veers away and is struck by a Vehicle,
d is for Duncecap stronger in metaphor,
m is Missing, printed on Milk cartons,
z begins Zoo, as in this place is a,
h the House at the end of the block,
t’s a little Terror for always,
y the Yardstick taller than You,
l is for Lullabies recorded in books,
q is for Quiet lined up in the hall,
w Whispers Warm breath and lies,
j stands for Jumpropes hung up on hooks,
p gets colder the longer you sit,
n is for Nurse, who asks for your troubles.

Their eye-light is not from fire:
it is cold. It does not burn

their sockets like their sinews
burn from driving picks

into coal, their own tendons
pulling them along. They draw

the light from a black chill,
then up like water from a well

dug to a pool where the star
the earth once was, resides.

They share the star among them,
wide-eyed, blackened faces in a row

above the mineshaft elevator’s
gate, turned to us, the other world.

The Painters
The painters next door are singing fragments
of Mexican pop to an empty house
without their spattered radio today
as miniature orchestra to guide them.
They must be nearly done, looking for swaths
of Painter’s Holiday where glum dinge
still breathes through their fresh coat.
Oak floors have been revealed from under
wall-to-wall beige, the vanity has been yanked
and replaced, its pink basin lying sideways
in the drive. The scrapmetal guy, reverse
of Medieval peddlers crying What do you lack
to thin streets, slows down in his truck
so his nine-year-old daughter can ask if the fridge
will be used or is fated for the dump.
A late-summer rain begins, its drops
falling straight through a breeze
that brings July back up from sidewalks
where its scent had rested. What do you lack?
The singers’ sporadic tenors shine through ladders
and windows, through doors and newly-wet leaves. 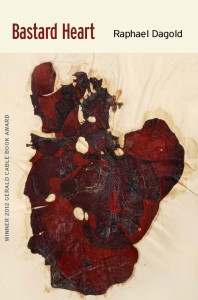 Raphael Dagold is the author of the poetry collection Bastard Heart (Silverfish Review Press, 2014). This year, he won the Mountain West Writers’ Award in Poetry, the American Literary Review Creative Nonfiction Contest, the Scowcroft Award in Prose, and was a finalist for the North American Review James Hearst Poetry Prize. Recent and forthcoming publications include The Antioch Review, Western Humanities Review, North American Review, and The Asheville Poetry Review. He is currently sending out a new poetry manuscript, Self Storage, and is an Associate Instructor of composition and creative writing at the University of Utah, where he received a PhD in Creative Writing and Literature in May. A radio interview of him in can be heard here.