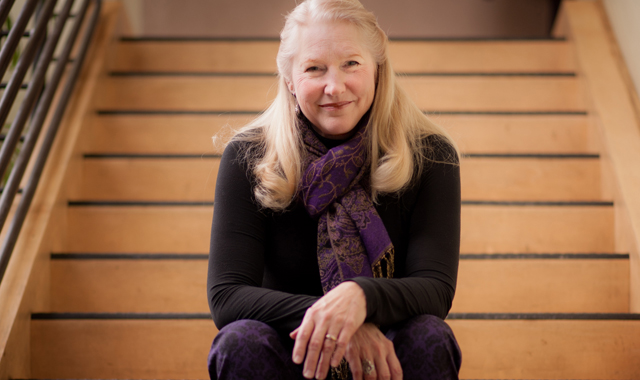 Heather Campbell’s art explores life experience. Melding polymer clay with a variety of found objects, she creates elaborate narrative pieces that speak to experiences both personal and universal. Her own story begins in Taylorsville, Utah, where she grew up in a home surrounded by art. “I’ve been doing art in some form or another since I was I child,” Campbell says. Her mother was a watercolorist and a ceramicist who often took her to the local craft store or to ceramics classes, where Campbell developed a fondness for clay. Around the holidays, her mother used her skills as a painter to decorate the windows for Halloween or to turn Christmas cookies into individual pieces of art. “She was all about beauty, art, and music,” Campbell says.

In ninth grade, Campbell took her first jewelry-making class and discovered she loved the craft. When she continued to college at Brigham Young University (BYU), she explored ceramics and pottery. Her creative pursuits later led her to open a dried flower shop called “Honeysuckle and Ivy” in West Jordan’s Gardner Village. Campbell specialized in floral design and she ran the store for nine years, during a time when she was recovering from a painful divorce. “Our family was very close, and that’s what pulled me through, was this little business,” she says.

When she remarried, Campbell moved with her husband to Logan, a community she says she loves and where she still lives. “[The move to Logan] was the first chance I really had to go back to my real love,” she says. Campbell enrolled in a jewelry-making class at the local high school, and while the work was satisfying she felt a desire for something more. “When you do silversmithing everything has to be very precise,” she says. “There are only certain colors of metal you can use and it’s very limited in certain ways, and I just couldn’t do that. I wanted to be more free, so I thought, what else could I do?”

When Zim’s, a local craft store, was having a closeout sale, Campbell wandered through the aisles until she came across packages of polymer clay. Next to them was a small sheet that gave instructions on how to condition the clay using a pasta maker, which she promptly bought at a kitchen store. After three months of teaching herself how to work with the clay, she found herself at Michael’s, another craft store, where she discovered an abundance of resources. “I was shocked because there was an entire section for polymer clay. They had the clay, the tools, the books to teach you how to do it, and it was all right there in front of me. I had no idea that it was an actual art medium. I was just so excited,” she says.

Campbell is fond of polymer clay because of its versatility and the color combinations she can create with the material. “It has so many interesting directions that you can take it,” she says. She had found a versatile new material, but she still found jewelry-making too restrictive. “One day I was working on this piece of jewelry and I just stopped. I said this is too tight, it’s too small, it doesn’t say anything. I have got to do something different,” she says. Campbell went out to her studio and found a large frame, which she filled with found materials and other objects she had on hand. “That was the beginning of my assemblage art.”

Through her assemblage art, which incorporates a variety of materials into her polymer clay, Campbell found her niche. “All my assemblage pieces have a story, and it’s so much more fulfilling to me to work on something with parts and pieces, and problem solving.” The complex nature of her work tells rich, intricate stories about the lessons people learn over a lifetime. “The themes that come out in my work are life experiences. Life experience teaches you every lesson you need to know. Humor, tragedy, happiness, beauty, sadness, despair, all those things are part of life and so they’re all part of my work. My pieces are about life’s complexities,” she says.

In her “Lost Treasure,” an elaborate, intricate mix of materials frames seven pairs of children’s shoes. An earthquake that devastated China in 2008, where an estimated 68,000 people lost their lives, inspired the work. “Children were lost in an instant, all that we might have left of them might just be their shoes,” Campbell says. When the piece was shown at Meyer Gallery in Park City last July, she says a board member of the United Nation’s Children Fund (UNICEF) purchased the work.

“Holding it Together,” tells the story of keeping things together, even when life become insurmountable. “It was a hard piece to do because it was very emotional,” she says. “It’s all about being consumed by rough experience. If you live long enough, you’ll be touched by tragedy and sorrow and you will have to figure out if you are courageous enough to hold it together until you find joy again.” She created the work by taking a hacksaw to a mannequin and sawing it to pieces, then patching it together again with twine, nails, glue, pins, and other materials. “It is a figure of woman and that’s important to me because tragedy hits everybody, but I think it hits women harder, and not only the women but their children as well. Women not only have to make it through themselves with all of this and hold it together, feeling like they’re being consumed by this, but they also have to keep feeding and giving, and taking care of others, at the same time as they’re trying to hold everything else together.” The figure’s nipple is pierced by a diaper pin, from which hangs a spoon. “She is constantly the source of nourishment and the source of life while trying to keep herself together.”

Campbell tackles weighty subjects, but her work is not without a sense of humor. “Moxie” is both a woman and a typewriter, inspired by Campbell’s feminist views gleaned from the 1970s. “It’s about a woman taking ownership of herself and her life. She’s a typewriter and so she is typing out her story and it takes a lot of moxie to do that,” Campbell says. “Moxie” was also shown at the Meyer Gallery and Campbell said a woman viewed the work and exclaimed, “That’s me!”

That sort of reaction is what has made Campbell’s artistic journey worthwhile. “It’s the connection that you get with people who love your work as much as you do. And that’s what makes it all right to sell them. I get so attached to them and they’re so personal to me, but having people react to them in such a visceral way is what it’s about,” Campbell says.