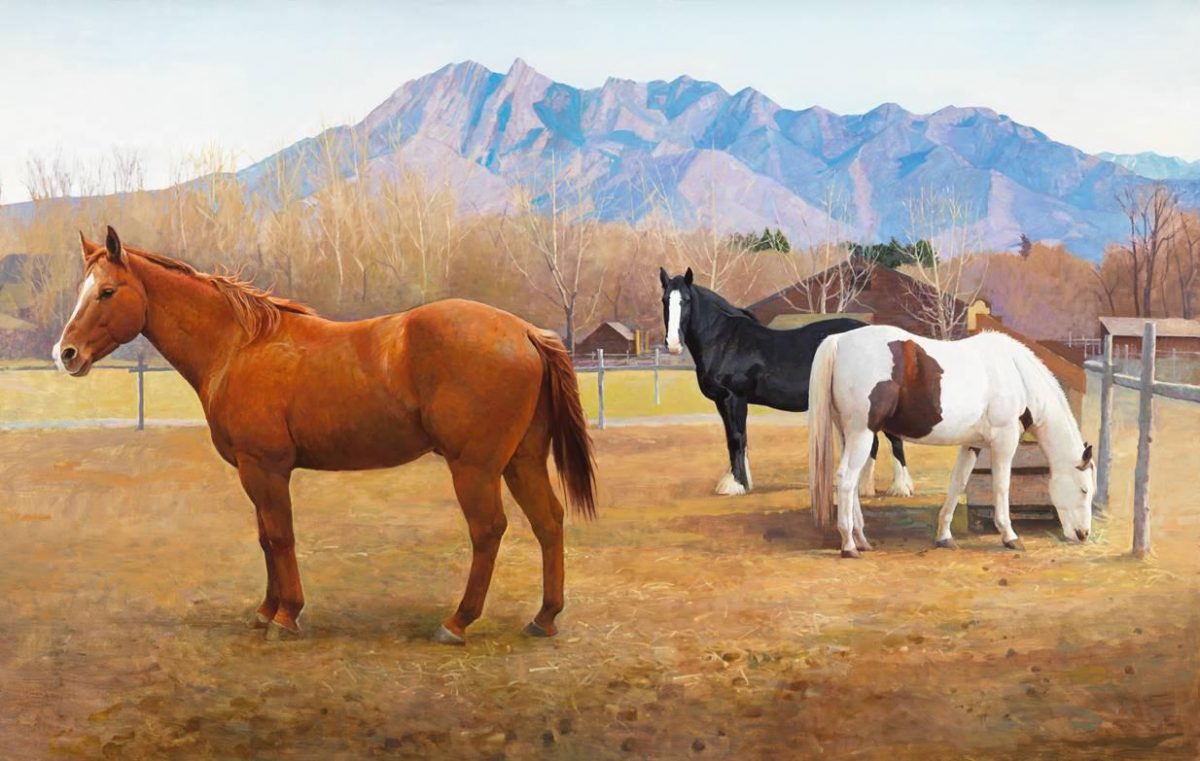 “To be an artist, you have to work like a madman,” says Galina Perova, her voice tinged with an intensity that also radiates from her award-winning oil paintings, found in state government buildings, the homes of politicians and influential entrepreneurs, and the University of Utah Medical School. Perova paints in an unusually wide range of genres and with impressive technical skill — a testament to the unrelenting work ethic she’s cultivated since she was a child in the Soviet Union. Her studio is currently filled with naturalistic oil paintings of animals — gleaming horses, strutting roosters, and serene lambs standing in snowy fields — prepared for her upcoming solo show at Park City’s Meyer Gallery. Her work space, a historic Baptist church she renovated herself, has high ceilings that provide an atmosphere with “something of the sublime,” she says. Her studio, technical precision, and philosophy about art nod to the traditions of the old European masters, who she spent decades studying and have inspired her to strive to capture the subtle drama and timeless vibrancy of nature.

One of the first art historians, Pliny the Elder, tells of a legendary artist who paints grapes so lifelike that birds try to peck at the surface. Testing the boundaries between art and life requires skill that has been prized for millenia across the world, and Russia has always been proud of producing painters with this high level of expertise. “Professional artists are trained and thought of more like medical doctors are here,” says Perova. “You can’t just decide to become an artist. You must practice for years.” Her skill was cultivated from childhood and she says, “Art is like the universe. There’s so much in it and there’s something new to learn every day.”

Perova began painting when she was five years old and showed special artistic talent. She was accepted into a rigorous art school for gifted children in Krasnoyarsk at 13. At the time, she was considered almost too old to be admitted to the program, and her composition and other art assignments were heavily scrutinized. Perova recalled childhood assignments designed to portray the Soviet Union’s government and history in a glorified light. She remembers her art teacher asking students to create a composition of Vladimir Lenin teaching children (a popular art and propaganda subject at the time). She went to the local town square and drew a monument with this subject from life, even though the sun’s position made it difficult to see. The resulting drawing was dark, with Lenin and the children silhouetted against the sky. Her teacher scolded her and her classmates laughed. But this attraction to dramatic contrast and ability to grab attention using light make her work today something special.

Working her way through the demanding national art curriculum, she refined her skill by looking at history’s greatest painters. During the course of her master’s and doctorate degrees in art at the prodigious Repin Academic Institute of Fine Arts in Saint Petersburg (then Leningrad), she spent many hours in the famous Hermitage Museum studying how the old masters applied paint, used color, and balanced light and shadow. “The art students were allowed in the museum before it opened, so we could copy the art in person,” Perova says. “To study paintings by the Renaissance masters so close was amazing. You begin to understand how they did what they did.”

The paintings slated to be exhibited at her upcoming show contain this lifelong interest in capturing sparks of life and the feeling of the present moment on canvas. Propped up in Perova’s airy studio, one canvas shows three sheep standing in the middle of a snowy field. Turning toward the viewer and gently lit by the reflection of sun on the surrounding snow, the front tri-colored sheep looks as if it’s about to take a step. The same expert rendering of texture and gentle animal expression can be found in a painting with a brown and white calf standing in front of a dark barn door. The composition frames the calf’s soft face and its body seems to radiate heat in the cold winter air. Each animal in these paintings is rendered with tenderness and an attention to the anatomical details and facial expressions that make each a unique individual.

The subjects of her upcoming show, many of which live at the historic Wheeler Farm in Murray, are close to her heart. Perova is an animal lover, and her friendly cat and dog greet guests who visit her studio. She says her favorite animal is her dog Annie, who is one of her best models and the subject of another large painting in her studio. “I love animals because they’re innocent,” Perova says. She adds after a pause, “Humans are different.” This statement is understandable: in her youth, she witnessed humans’ capacity for darkness. Asked to recall what she remembers most about growing up in the Soviet Union, she pronounces one word without hesitation: poverty. “There was no middle class, only the very poor and some very rich. And it hasn’t changed,” she said. “It’s mostly the same today.”

The darkness in the government and social structures made her dream of traveling abroad and escaping. “I always wanted to leave,” she says. In 1989, as the Soviet Union crumbled, she secured special permission to travel to the United States and has never returned to the country of her birth.

Perova’s paintings at Meyer Gallery show fleeting moments in nature, captured and made timeless with art. The sensitivity with which she renders nature’s innocence, which survives even harsh winters, speaks to not only her technical prowess, but the life experiences that have deepened her inner emotional landscape. To see the subtle details and technical mastery of her paintings, you will need to visit in person. 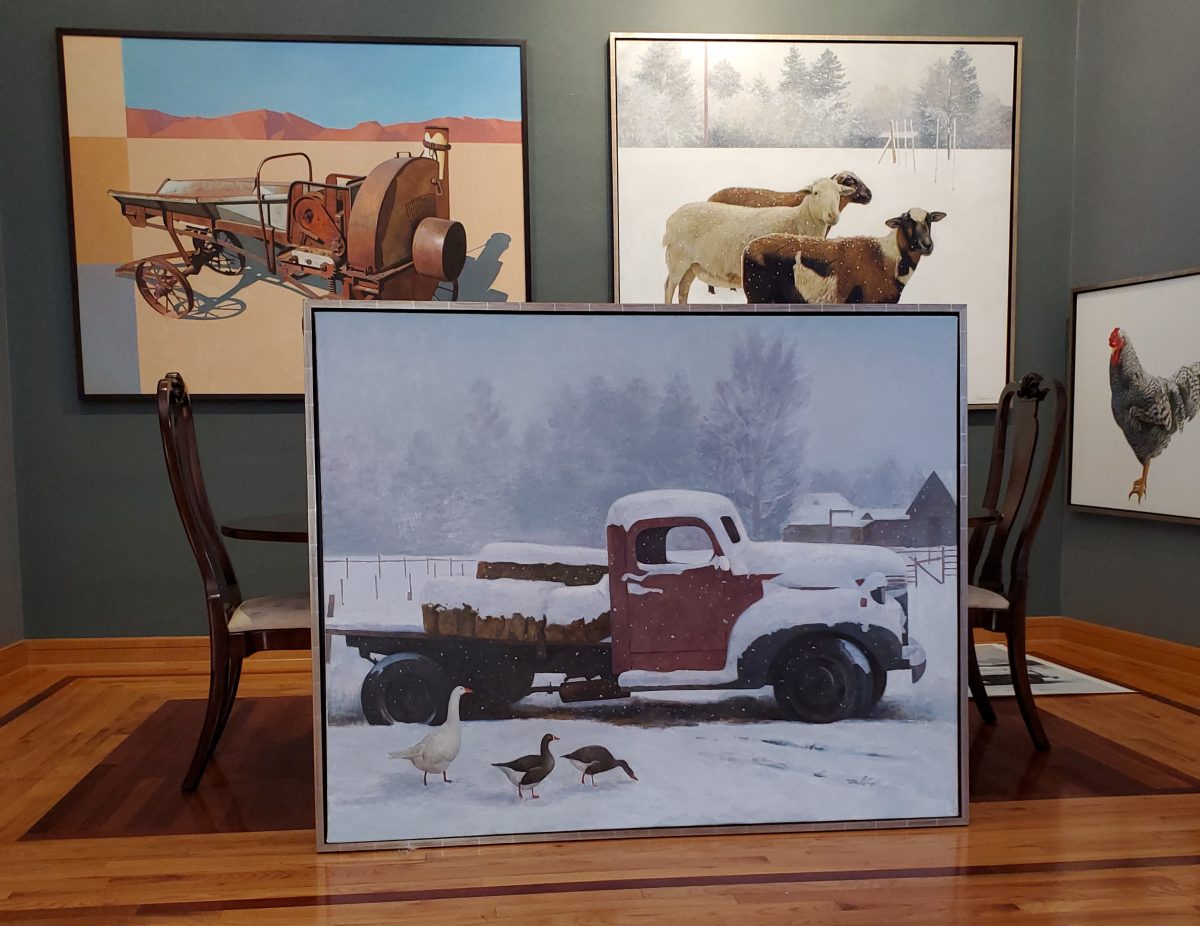 A look at works inside Perova’s Salt Lake City studio