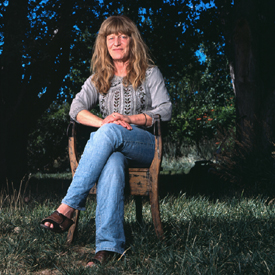 Google search Adele Alsop and you will find reviews in the New York Times and national art magazines. Alsop’s artistic heritage includes a long line of painters that extends to her great grandfather and includes her grandmother, mother and several cousins. She has an impressive education and what she calls a spiritual connection with living things. Raised and schooled in New England and connected with all of the right people, it is surprising to find her residing in Utah’s own Castle Valley, east of Moab. Last month, Brian Parkin invited me to join him for a preview of her works, now showing at Moab Art Works through the end of September. As we drove upstream alongside the Colorado River and turned toward her mountain home studio, which includes a 360 degree view of plein-air opportunities, it became clear why she lives here.

Alsop’s front room studio is filled with the smell of ripe art and images resulting from the artist’s excursions out into the endless wilds to paint. She feels no need to drag along a French easel or elaborate paint box. Alsop travels light: with only a backpack and the sparest of materials when she adventures onto “the mountain” (local slang for the whole LaSalle mountain range that includes 13 peaks). Often wrestling a large (40 x 42) blank canvas in and among the trees on these forays, Alsop works to find a place to sit or stand where she’s not going to burn up, freeze to death or blow away. She says “I’ll have a vague idea of something I want to paint and then I may completely change my mind. The evening and morning light is so incredible, especially in the spring and fall because the sun is starting to get lower in the sky. Painting is an exciting, challenging and mysterious process. It’s not about what’s there, it’s about your perception of what’s there. It’s a feeling.” 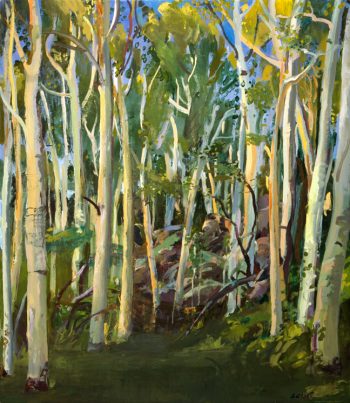 In Alsop’s studio the first painting that caught my eye was “Aspen Forest Speak Friend and Enter.” Alsop says there was a young black bear wandering among the aspen and she seriously considered putting it in the painting. She often paints with bears moving through the forest around her. With surprise, I asked her if she is ever afraid, and she quickly assured me that the bears in this area are wild, not campground bears, and they are more frightened of her (and her large dog) than she is of them. But still they are bears and she respects them. Alsop sees and hears all kinds of things while she is painting. “Mountain lions are scary,” she says, “because you feel them there before you ever see them.” Evidence of her years of experience, Alsop makes every brush stoke count as she visually describes this complex scene in the deep woods. 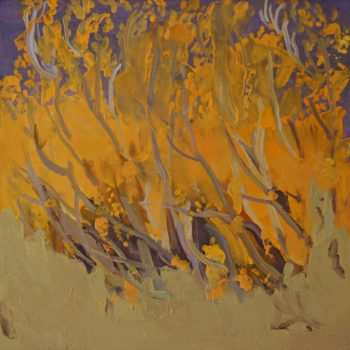 “Ablaze” is a smaller painting in contrasting purple and yellow that I wanted to take home with me. I enjoyed the abstract nature of the piece because it left me wondering if I was looking at a forest fire or a cluster of brilliant yellow fall trees waving on the hillside.

Alsop described in detail the magic that happened for her as she painted “Flowing North.”  The painting was propped against some rocks and one side of the bank was bathed in bright intense light while the light on the other side of the bank was atmospheric. This is the magic that Adele captures on canvas. She admits that trying to paint the moving water nearly drove her mad. The colors in this work successfully lay next to each and play off one another to create a dynamic flow of energy coming right toward the viewer. 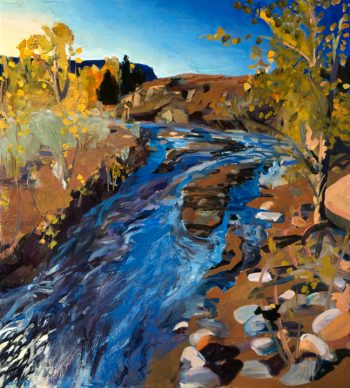 Alsop is also an accomplished musician. She plays the accordion, piano and a variety of other instruments. Her musical touch is evident in her lyrical painting style. The brush strokes are immediate and seem to resonate off her surroundings as they record the colors musically. This success with color attests to the influence of Joseph Albers on her work, which is also strongly influenced by Neil Welliver and others who ran the graduate school art department at the University of Pennsylvania where Alsop studied.

Through September 29 at Moab Art Works, you’ll be able to experience the magic of Adele Alsop’scolors and the dance of her brush in this exhibit of new oil paintings. A selection of prints will also be available.