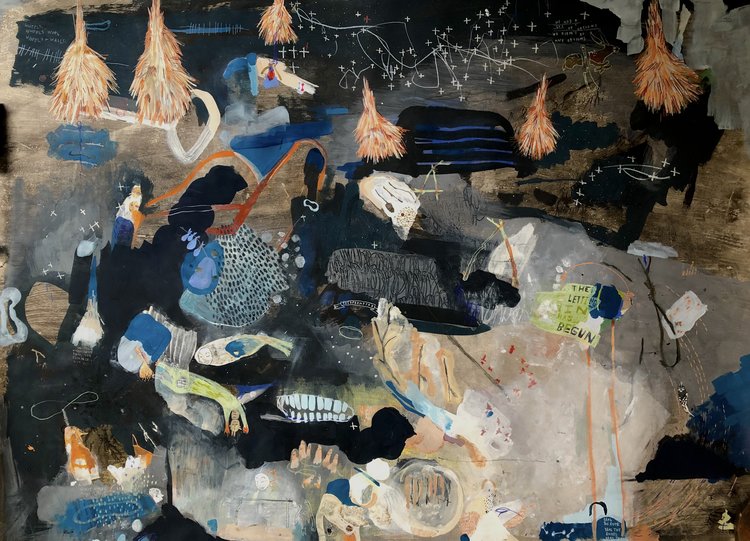 Myth,
open at Modern West Fine Art until October 31 and featuring three of the gallery’s newly represented artists — Fidalis Buehler, Mitch Mantle, and Wren Ross — combines their three bodies of work, which share a preoccupation with pictorial symbolism and a dash of aesthetic abruptness. Colorful, confrontational, and sometimes bizarre, the work of these three artists cracks the mold, but also poses classic conceptual questions.

One commonality is that the pieces in the show, diverse as they may be, all reference ideas that first came from the German anthropologist Adolf Bastian and were brought into mainstream consciousness by Swiss psychologist Carl Jung. The central avenue of discussion in Bastian’s work is the “collective unconscious” — a concept that has stirred controversy and produced a field of discussion about human symbol-making for almost 100 years. In a panel at the opening of the exhibit, the three artists mention the legacy of Jung’s idea on their artistic processes, specifically symbols’ and storytelling’s role in communicating complex ideas. In Jung’s landmark 1927 essay “The Structure of the Psyche,” he states that the “collective unconscious appears to consist of mythological motifs or primordial images. … The whole of mythology could be taken as a sort of projection of the collective unconscious.” In the reflections on their work, Buehler, Mantle and Ross say they sometimes borrow symbols found in fairy tales and epics. Our dreams or religious ceremonies also contain images that at times communicate or reflect key indicators of our overall psychological health or damaging preoccupations, as Jung saw it. 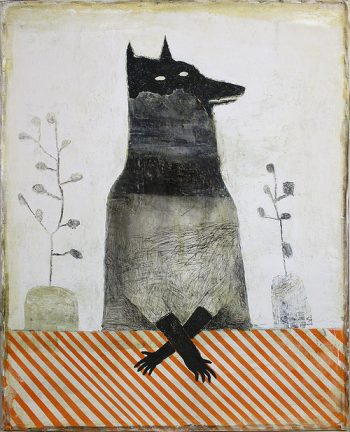 Fidelis Buehler, “Wolf and Plants seated at the Caution,” mixed media on canvas, 54 x 48 in

A few prominent symbols repeated in Myth include moons, clothing, fire, and wolves. But with these symbols being used by individual artists in different contexts we are spurred to questions that informed Jung’s own investigations: Are they firstly personal (do they reflect something that happened to a person when they were young)? Or do they sometimes reflect a shared vocabulary of images and concepts that would be communicated genetically, orally, or through physical means, like rituals? No psychologist has, to date, answered completely where, why, and how a symbolic lexicon builds up over time, spilling from one set of individuals in a generation to the next. Myth places these questions at the forefront of the collection of work and the artists’ own reflection on their creative process.

In Fidelis Buehler’s “Wolf and Plants seated at the Caution Table,” a wolf wears long black gloves and crosses its arms on a striped tablecloth, while Mitch Mantle’s red dog runs stiffly across a soiled carpet in “Sleeping Giant.” The artists show canines framed in hinted-at narratives, but insert an absurdity that also defies a strict traditional story structure. Wren Ross sticks to prey animals, with many backwards-gazing hares in the “be still be quiet do nothing ” series. Ross’ game symbols look like pictographs from the Southwest, and her inversion of typical linear perspective, favoring the flattening more common in hieroglyphs or Medieval texts, is also common among the three artists. Buehler’s “Lei for the Wolf” shows a wolf, legs stiffly crossed, below a human figure in a yellow hoodie holding a loop of flowers, also pushed up to the visual plane. The animal and figure have the same flat and tilting, dreamlike quality of Marc Chagall’s painted figures. Ross’ “A Great Spirit Walks the Land” has fish and human figures splayed, with simple shapes like crosses or infinity symbols painted in thin lines between the more detailed elements. 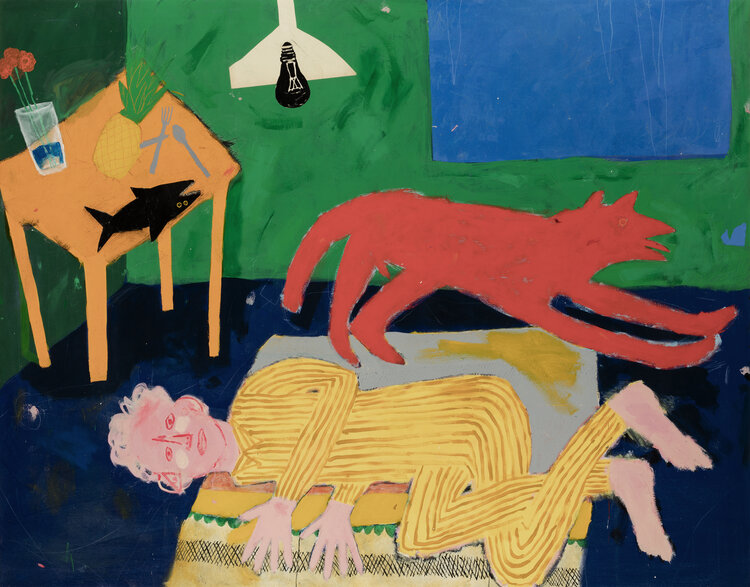 “Mythology is important because it is not law that was tipped onto us, but a joint agreement about what magical answers exist for our humble questions,” said Wren Ross in an exchange with the gallery. “Myth reaches out and reassures us that the trees lose their leaves with purpose, not dispassionate surrender. … It is a kind of portable transmission — like a radio — that pats us on the back when we enter a room full of strangers.” Here, she communicates the essential function of myth: connecting people with a shared set of concepts they can use to communicate their emotions and fears. The symbols connect on a level that bypasses strictly reasoning functions.

Mantle takes this warping of perspective and applies it to his large canvases of figures, reminiscent of 19th-century group portraits like Edouard Manet’s “The Lunch on the Grass,” or Paul Gaugin’s “Tahitian Women on the Beach.” The effect is an impressive, bright look at abstracted figures that approach full-size in some works like “Empty Chair,” “Woman Resting,” or the 73-x-60-inch “Bird Catchers.” Often the human figures have hands unbent, which look like symbols for “here,” “stay” or even “stop.” The faces are simplified into near masks, with “Empty Chair” giving us a red-and-white-faced woman facing forward and a pink-faced woman in profile.

These facial abstractions reflect an idea of the concealment of disguise, which can also be located in Ross’s collection of paintings and notebooks. Ross says: “I think we are least lonely when in disguise, our softest centers sheltered and easiest to access. We can sit holed up with our shortcomings and our flaws and our weak places all contained and resting, and dance fearlessly in the firelight with the other goblins.” Her figures’ heads in the “sit still be quiet do nothing” series sometimes look like flat masks and some have hats or hoods. Buehler also loves hoods: “Catch and Release II” and “Lion King” have figures with red fabric pulled up around their faces.

Together, the artists create a mixed group of stories in paint, which combine the old and current, the orderly and absurd. “In some instances the use of more universal symbols can help the viewer and artist connect,” says Mantle. “I have found that by portraying these symbols through the lens of personal experience and meaning, in a way, I have created my own visual language.” The notion of myth and symbol sits with the viewer through the show, providing a unifying backdrop that allows differing styles to communicate. 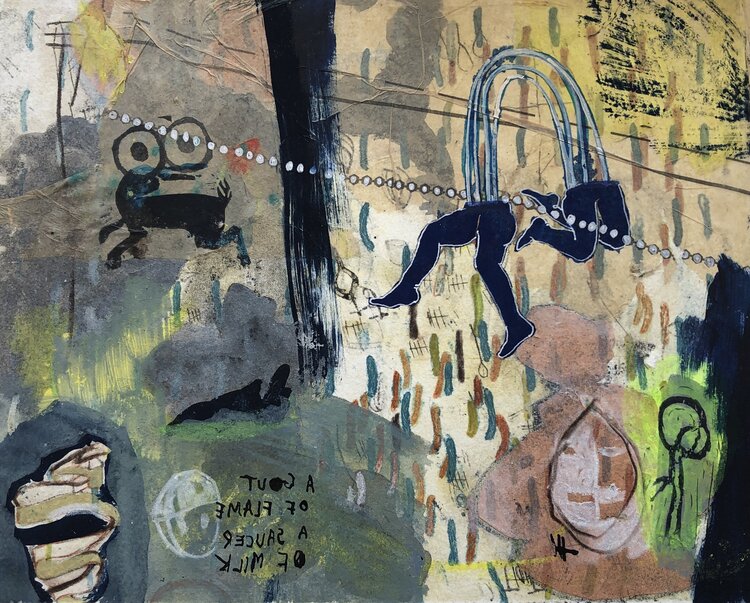