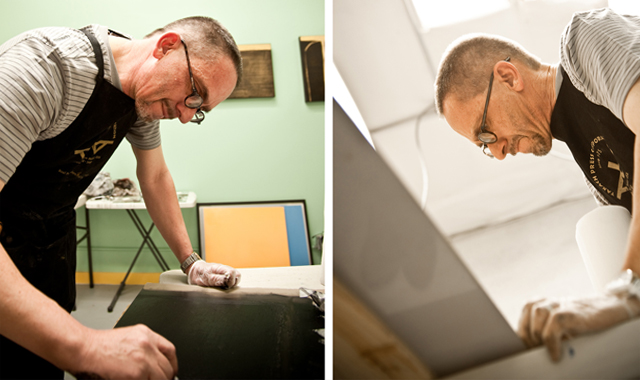 “If you have visited the semi-annual events at Poor Yorick Studios, you probably have noticed the working space of Paul Vincent Bernard. Anchoring a corner of the west side, the studio is a monument to artistic creation and expression that is at first overwhelming. After making your way through the tight space, past tables and presses, you will find a Salt Lake City artist firmly grounded in tradition who over a fruitful career has produced an oeuvre that has proven obliquely challenging, cautiously defiant, hauntingly different and loudly intelligent. Bernard is a printmaker’s printmaker, an expert in the historical form, but in recent years he has become equally known for his paintings. A current series of these, on exhibit later this month at Art Access, are large abstractions on aluminum created by thousands of minute lines. They reveal the scale and scope of Bernard’s ability, and the fact that Bernard the painter has stayed true to his roots as a printmaker….”

In the June 2012 edition of 15 Bytes, Ehren Clark visits the studio of Paul Vincent Bernard to tell the story of this printmaker turned painter.