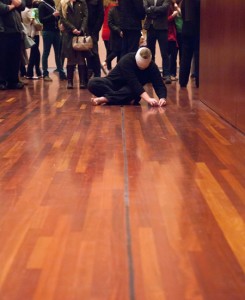 In our April edition, Alexandra Karl’s review of the Faculty exhibit at the UMFA began with a description of Kristina Lenzi’s performance piece “Expel.” As Karl wrote, “Donning a blindfold, the artist laboriously scraped a line of museum tape from the floor, rolling it up into a wad of black rubber, which became a black balloon . . . The more she blew, the more distracted I became by the crowd, schmoozing loudly and noshing on their crudités. Lenzi’s action however drew them in, as they became ensnared by the battle between her lungs and the balloon’s elasticity.”

That appears to be changing in Salt Lake, and not only in the big establishments like the UMFA and UMOCA. Nox Contemporary has been including performance elements in their exhibitions and recently announced that July will be performance month in the space. And this week we learned that the Dunce School for the Arts will be holding monthly showcases of short experimental pieces and works-in-progress, including performance work.

The Dunce School for the Arts is Alexandra Karl, Kristina Lenzi and Gretchen Reynolds, and is located in the Rockwood Studios, in Sugarhouse. They offer classes for adults designed to “help students distill an artistic vision and develop their own visual language.” They describe their classes as a blend of “time-honored traditions and contemporary practices.”

Twelve Minutes Max, which is being patterned after of a similar program in Seattle, features short performances, in a range of disciplines, that are twelve minutes or less. At the monthly events – they occur the third Sunday of the month at 2 pm – you’ll find performance art, dance, film, readings and more. This Sunday, May 20, TMM will feature “Studio Gift,” a performance by Lenzi, a short animated film by Carlie Jimenez, and a reading by poet Shaun Lawton. The event is free and open to the public.

Tagged as: Dunce School for the Arts, Nox Contemporary