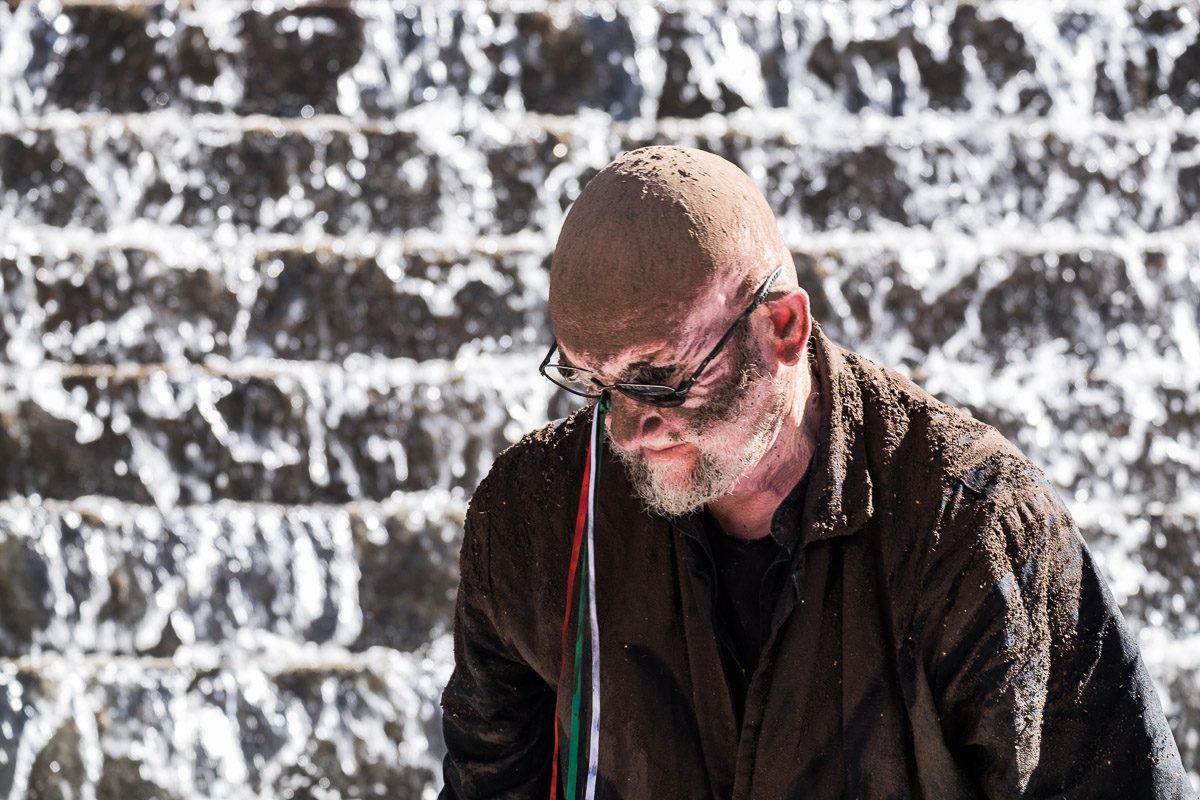 If you were at Library Square a year ago this weekend, you may have seen him: a middle-aged man, at the base of the waterfall in Library Plaza, rolling out a scroll of paper, holding it down with rocks, then brushing and spilling ink and dirt across the paper before walking along it with long tree branches balanced on his head. To conclude, he dumped an entire bucket of dry ash over his head, creating a cloud of dust that, once dissipated, revealed him covered with ash and dirt. Without a word, he walked slowly through the crowd and disappeared into the library.

“It was a quiet and serious piece and yet funny and playful and unpredictable,” says Paul Reynolds, artist, librarian, and curator of the 12 Minutes Max series at the library. “[It was] indescribable enough to really mesmerize his audience and allow each person to see it in their own way.”

Alastair MacLennan, a renowned performance artist from Belfast, was at the library as part of the fifth annual Salt Lake City Performance Art Festival. Founded and curated by Utah artist Kristina Lenzi, the festival gathers artists from across the state, country and world and invites them to use Library Square as a canvas for their art. The work must be site specific and family friendly, Lenzi says, but otherwise she gives the artists free rein.

Performance is a term not yet firmly fixed in the artistic or public mind. Marina Abramović, the world’s most prominent practitioner, has quipped that it’s for people who hate theater; yet, in many cases it can be quite theatrical. And there are genetic resemblances to dance and the visual arts as well. Lenzi sums it up simply: “It’s doing real things in real time and space.”

Part of the electricity of Performance, especially site-specific festivals like the one on Friday and Saturday, is that it interrupts: space, expectations, interactions. Library Square is the heart of the city and while many participants will, like a ticketholder at a theater, descend on the venue to witness a specific work, there will be many other unsuspecting viewers (who may also become participants) simply wanting to check out a book or grab a cup of coffee.

“As an artist, I go through a new artistic experience every time I perform, and I always learn something new about myself,” says Lenzi. “As audience, I get to participate/be part of or be witness to a fleeting piece of an artist’s world.”

Over the past six years, the festival has fostered dozens of performances, and like a proud parent reluctant to acknowledge a favorite child, Lenzi is hesitant to identify a specific performance — “there have been so many good pieces and artists that it would take all night to describe them” — but when pressed, mentions Marilyn Arsem: at one festival she could be viewed through glass in the floor reading Mary Norton’s The Borrowers for a day. “That’s the one piece that has really stuck with me.”

Arsem, from Boston, returns this weekend, along with fellow alumni Eugene Tachinni, Jorge Rojas, Gretchen Reynolds, Emma Wilson, Dawn Oughton, Lexi Johnson and Lenzi, all from Salt Lake, and Boston’s Tony Schwensen. New to the festival are Rosalie Winard (Salt Lake City) and Jeff Huckleberry (Boston). Alastair MacLennan will be there as well. No word on what his performance will be like. But it may get messy.