David Ericson Fine Art is a gallery’s gallery: old, jumbled, cozy. In this 1883 building, two chairs have been carefully set across from each other in front of the small fireplace, with its old ornamental insert, the solid, dull brass looking like an ancient shield against winter. There’s a Frank Lloyd Wright pot at the hearth. (“That Wright pot is not clay,” says David Ericson. “It’s cast metal. Bronze. Heavier than a bowling ball. You’d think twice before picking it up.”) There’s an old staircase, which Ericson says once had layers and layers of paint; after removing the layers, Ericson decided to leave it raw, only flecks of paint fragments here and there recalling its layered history. “Painting it any color would distract from the paintings here,” Ericson says. “What you really want is the paintings to show up.”

But Lee Udall Bennion’s paintings would have difficulty disappearing. Fervent with geraniums and hollyhocks, they are ebulliently cheerful, yet imbued, at the same time, with a brooding, mixed watchfulness and wistfulness. The inclusion here of the pottery of her husband, Joe Bennion, with its earthy quiet, is somehow similar to a man’s basic evening wear as he accompanies a woman dressed beautifully for the evening: his more neutral colors and plainer form allowing the woman to shine. 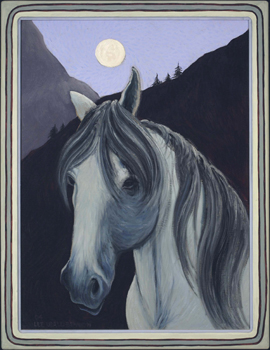 It would be fair to say the Bennions live the life a child might dream of living were they to become an artist. Their house is home to art and artists — according to Ericson, this is the house where Brian Kershisnik, a printmaker then in his twenties, once stayed for the summer, and, handed a paintbrush by Lee, began to paint. The touch of the artist’s hand is everywhere. Frames around Lee’s paintings are hand-carved and painted, by her: miters and joins invisible, painted in subdued shades of olive green, coral or golden yellow, they look as if they have simply been dropped over the paintings, cut out by a giant rectangular cookie cutter. From Joe’s potter’s wheel, everything is round as a planet; his bowls and platters seem the template for the spinning orbits of planets in this world. “I AM THE EARTH, THE EARTH IS ME” is in all capitals around the edge of one piece in this show; around the rim of another, are the words “Perfect Love Casteth out Fear.” When not behind the potter’s wheel or stoking the kiln, Joe is often a river guide, taking the intrepid on trips through the Grand Canyon. When Lee’s not painting she’s riding one of the family’s horses.

“Blue’s Return” is a portrait of the Bennions’ horse who “took off” to the mountains, Ericson says. Blue is painted with the mountains he was found in behind him, a bright little full moon looking a little like an inextinguishable lamp which guarded him at night. 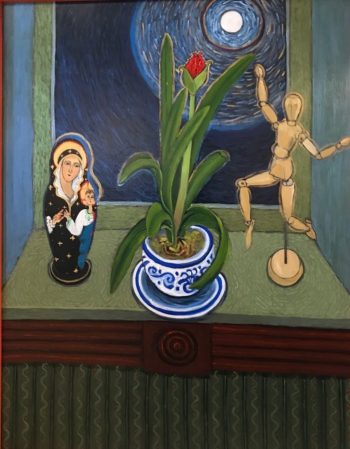 The moon is everywhere in these paintings, as if a bracelet of moon beads spilled from their string and ended up sprinkled throughout the group of paintings. In most, the moon looks like pottery, as if formed from warm clay on Joe’s wheel, though now, in the skies, they appear cold and flat. Most are encircled by blue, concentric orbital rings, particularly the haloed moon in “Honor Thy Mother.” Beneath the window through which this moon appears we see a Russian nesting doll, sleek and black and patterned; an amaryllis with its big about-to-burst open bloom coming from intense green stalk and leaves; and, as if executing a moon dance, a small artist’s poseable, wooden doll — a homely but perfect sculpture on this small, sacred table in the artists’ house.

In another painting, “Crossed Sky,” the moon is, this one time, buttercream gold instead of shades of cooler white — perhaps to set it apart from the blue-gray jet trails which crisscross each other in some sort of fervent sword dance there in the sky, the moon underneath them their judge, or arbiter. The sole un-full moon in this group of paintings is in “Spring Night,” a painting which seems to be waiting to be the background for a title, for a book cover. Its little moon-sliver, against all the dark, barely illuminates a single juniper. 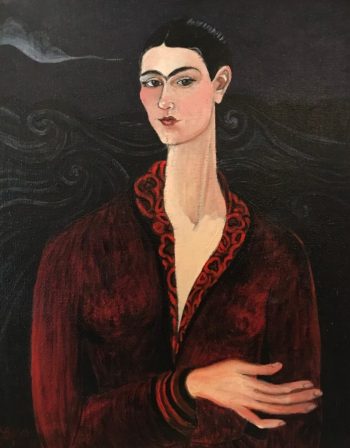 There is a charming and powerful painting here, which is a copy: Bennion has repainted one of Frida Kahlo’s many self portraits. In it, fierce Kahlo wears a rich, sultry, burgundy-red, deep-necked dress, almost a valentine portrait of a femme fatale: one huge, single, heavy, ringless gesturing hand at the base of the painting reaches out for nothing. Kahlo’s beautiful long neck seems to be born from a wish to have been painted by Modigliani; no one could have a neck so long and swan-graceful and sensual, much like the tall growing stem of an amaryllis plant, Kahlo’s head its large tilted dynamic bloom. There is a widow’s peak repeating in the center of Kahlo’s hair and in the Kahlo eyebrow(s); in this painting you realize there’s a bat-wingness about Kahlo, as if Kahlo could wing herself right out of this life and this painting. Escape the now.

Bennion, you can feel, is really loving the adventure of being Kahlo, being femme fatale. Only in this painting is the background black — rich, sooty, dark-as-death black. Of the many women here in this collection of paintings, this is the only woman with neckline plunging, but ears, unlike all the other women, without earrings. What look like rolling ocean waves, smoke-black, engulf the background. There is a mysterious blue shadow above (only) one of Kahlo’s eyes. What is it they say about eyes? One looks brightly to the future; the other is looking back, full of sadness, into the past. 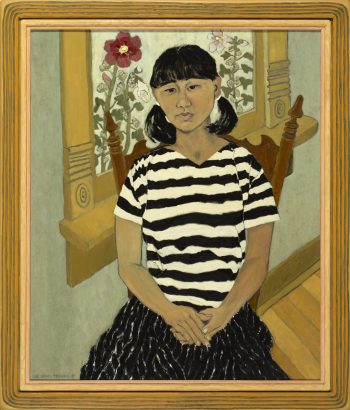 “Chico,” one of two paintings by Lee leaning against a wall in the downstairs of the gallery, may be the most gorgeous painting here: mixed with its sweetness is pain, fragility. Its background golds and greens suggest pensiveness, even before you see the serious expression on this girl’s face (according to Ericson, she was their exchange student who lived with the Bennions for a year). She looks both fragile and grateful; her hands are folded in her lap, but it’s touching to see that their clasp has fallen loose, as if she is lost in a fairly constant faraway reverie. Her skirt has an unusually rich, feltish texture — its black with white pattern looking almost like silkworms curling toward each other, very much like a mysterious fabric you might spot in a Kershisnik painting. Her shirt, with its horizontal white and black stripes, has the plaintiveness of a flag, suggesting a girl who is always trying to look much braver than she feels.

The window in this painting is different from most other Bennion windows, almost all of which are painted squarely, head-on; this very large window is at an angle behind Chico, suggesting, slightly, a train moving out of a station into the distance. Or coming forward. Her eyes look very distant; so, somehow, do her hands, not quite fully clasped.

“It’s the gestures which send signals in Lee’s paintings,” Ericson says. “The little touches of how they sit or stand, what their hands are doing, the gestures. She would not be very interested in, say, just painting someone’s head.”

Though, in “Through the Looking Glass,” there’s the exception to that: Lee Bennion’s own face, above a delicately blue-shadowed neck, is looking straight at us from a perfect square. “That’s Lee looking at her own face in the mirror over her kitchen sink,” Ericson says.

And you realize that just as the painting of the foreign exchange student is a painting of a moment in history, so is this painting of the artist looking at herself over her own kitchen sink. Both faces containing some present-tense, stunned surprise and wonder: why, here I am; how astonishing this is: I, in this moment, being painted. 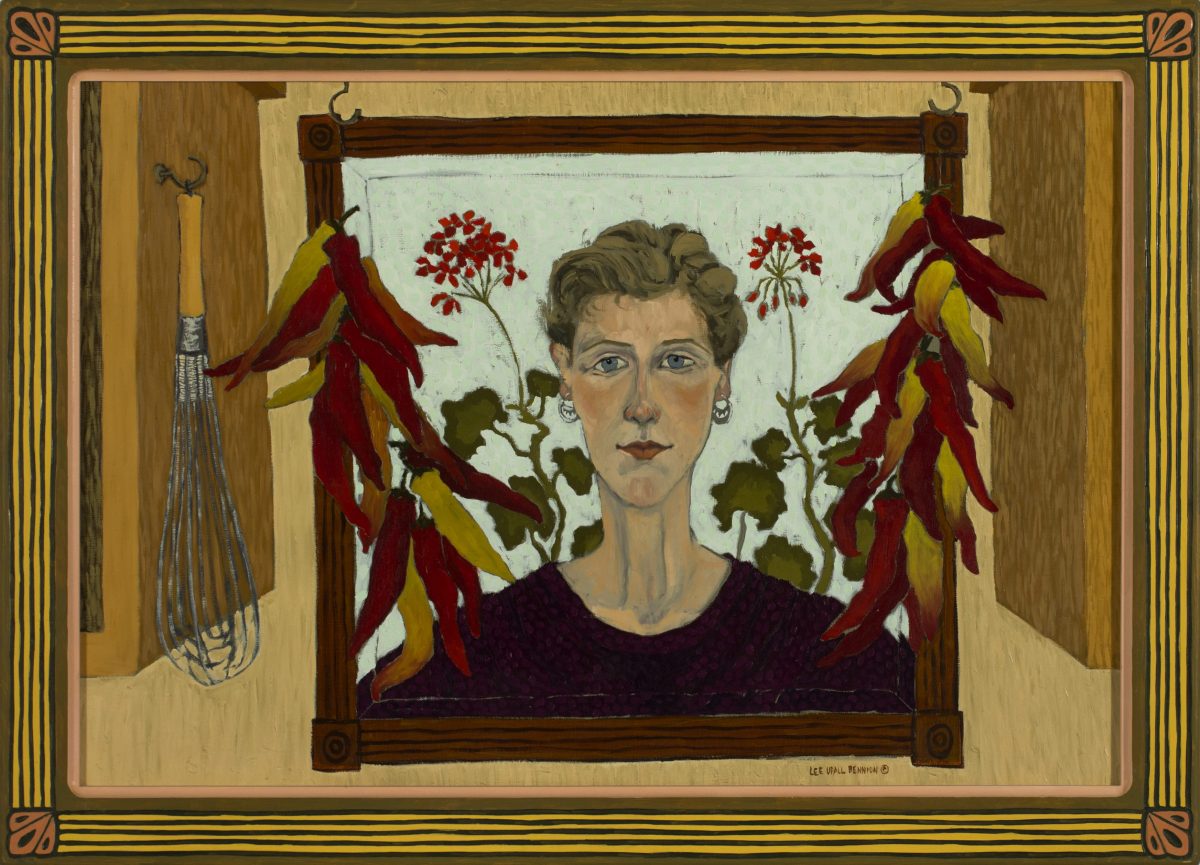