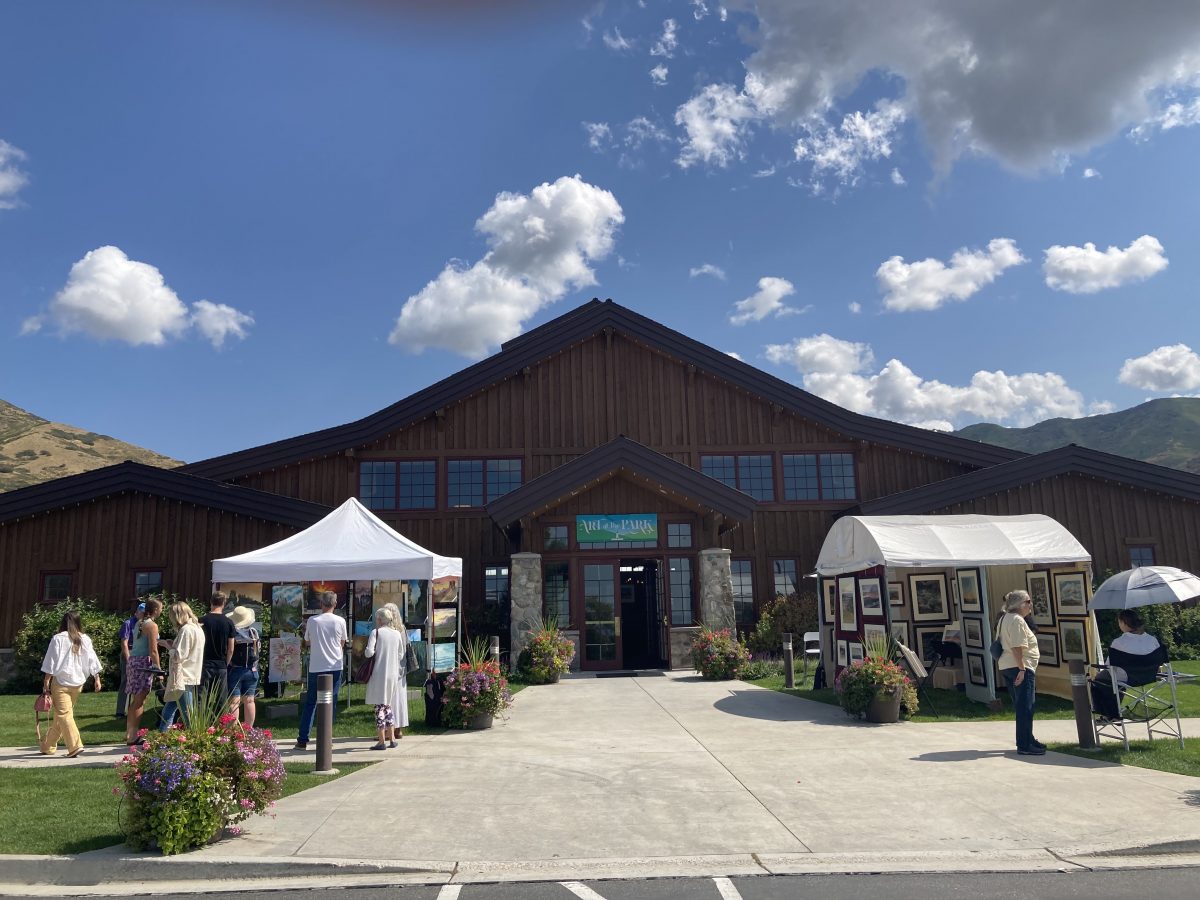 The Garden Place, a reception hall frequently used for weddings, is home to Art at the Park.

Seventy years ago, Utah artist Lynn Fausett wanted to turn the administrative building of the soon-to-be-demolished state penitentiary into an art center. Other ideas for the old prison’s acreage (now home to Sugar House Park and Highland High School) included a reconstruction of the old Salt Lake Theatre and a “Mormon Pioneer Village.” While Fausett petitioned for these goals (ultimately unsuccessfully), he created an open-air art exhibit using the north walls of the old prison’s stockade. Artists could submit up to ten works and would be responsible for hanging their own work. Fausett just wanted the work shown.

Seven decades later, Rob Chipman has, however unwittingly, picked up some of these threads and woven them into Art at The Park. “The art world is dysfunctional,” he says, regarding the number of good artists making work that is never or rarely shown. “That’s why I wanted to create [Art at The Park].” 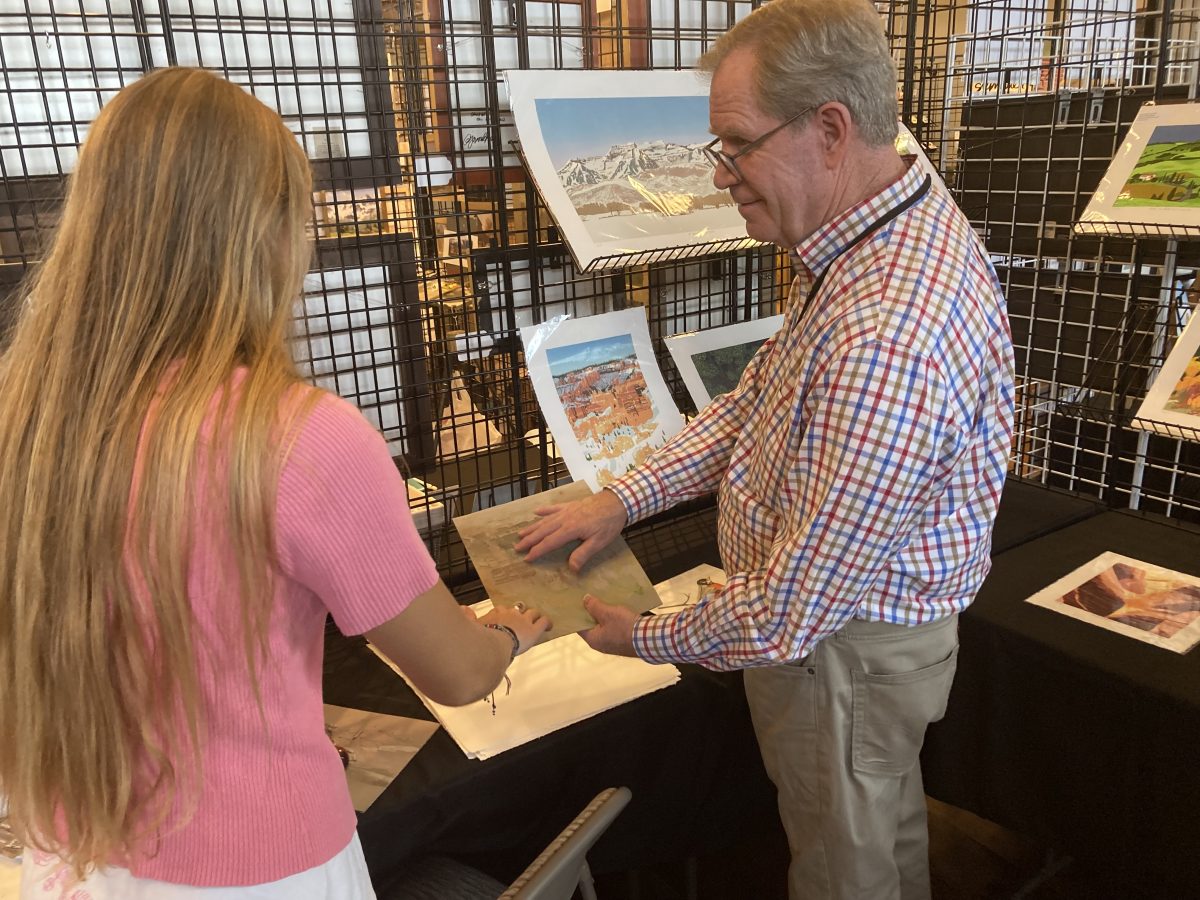 Rob Chipman, best known for his block prints, explains his process with a hands on approach for a visitor to Art at the Park on Friday, Sep. 16

The “Mormon Pioneer Village” envisioned by Fausett and others ultimately became Heritage Village in This is the Place Heritage Park, at the mouth of Emigration Canyon. On Thursday, in The Garden Place building on the park’s west side, Chipman inaugurated a new outdoor open-air event to display the talents of Utah’s artists.

After a private reception Thursday evening, Art at The Park opened Friday (12 – 9 pm) and will continue Saturday, 10 am – 6 pm. The event features 80 artist booths, both inside the building and surrounding it in covered spaces. The booths are mostly 10 x 10 feet, a standard size for arts festivals: it’s enough to hang a few large works and a dozen or more smaller ones, while accommodating both the artist and a couple of visitors. Several artists have chosen to create works in their booths during the event, and all seem eager to talk about their work and process. Landscape works dominate, but there is plenty of variety to appeal to a range of interests. 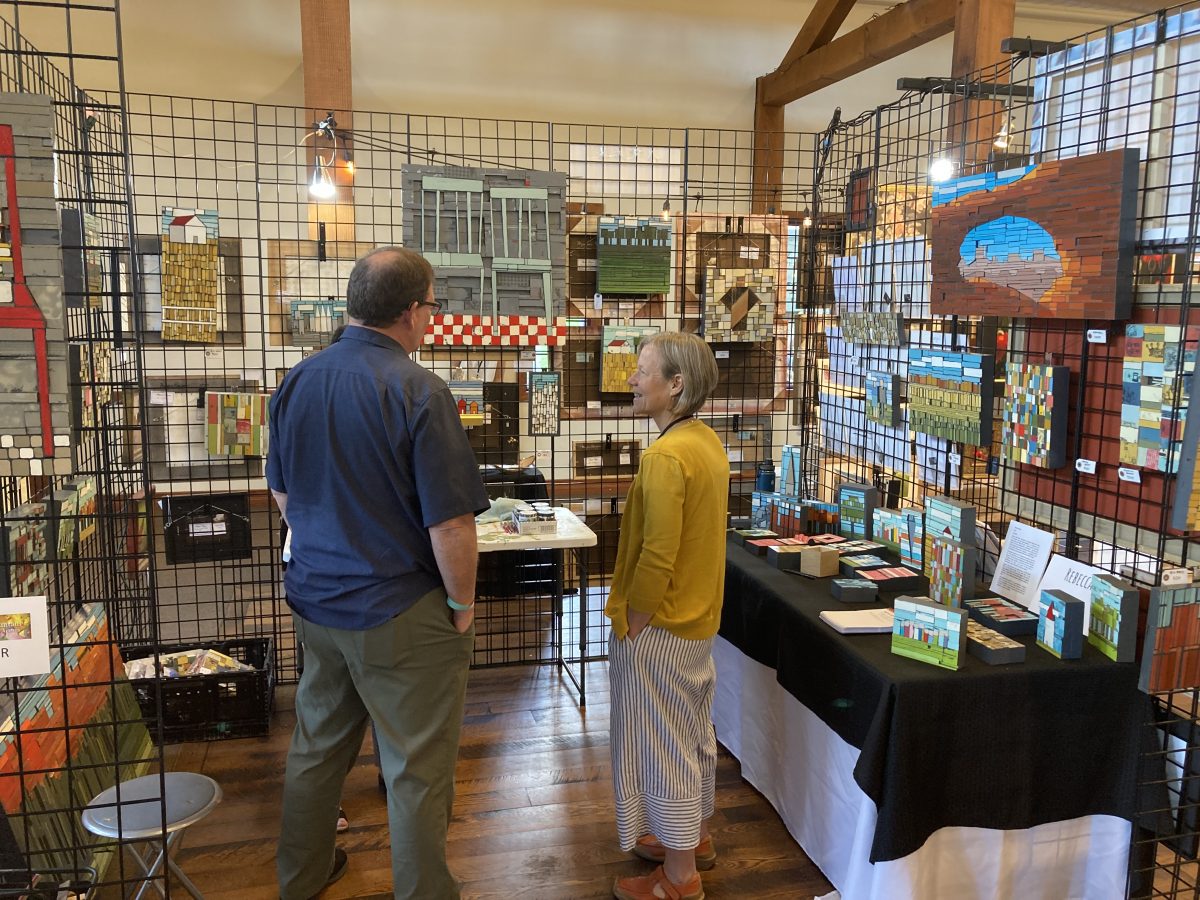 Rebecca Klundt knows a little something about art and parks. The Salt Lake City artist creates collages out of reclaimed and repainted wood and  has been holding workshops in city parks in which she brings the raw materials for participants to create their own mounted assemblages. At her booth, near the main entrance, you’ll find her works in a variety of sizes or you can purchase a starter kit to make your own. 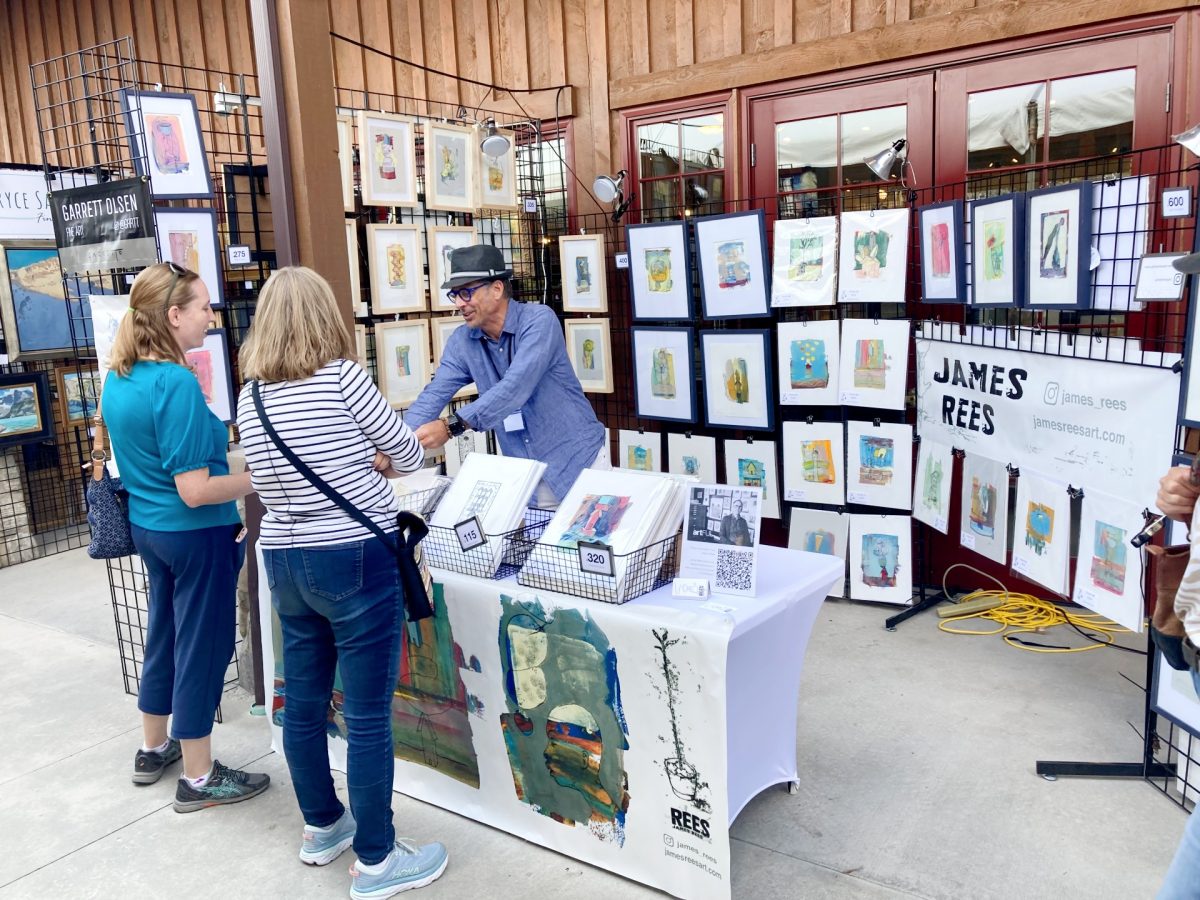 Award-winning printmaker and educator James Rees, came up from Utah County for Art at the Park. “Art for me really is about making connections,” Rees says. He says festivals like Art at The Park are lot of work. “But the interpersonal exchanges I have with people in the community discussing my work and helping them to understand where I’m coming from is priceless.” 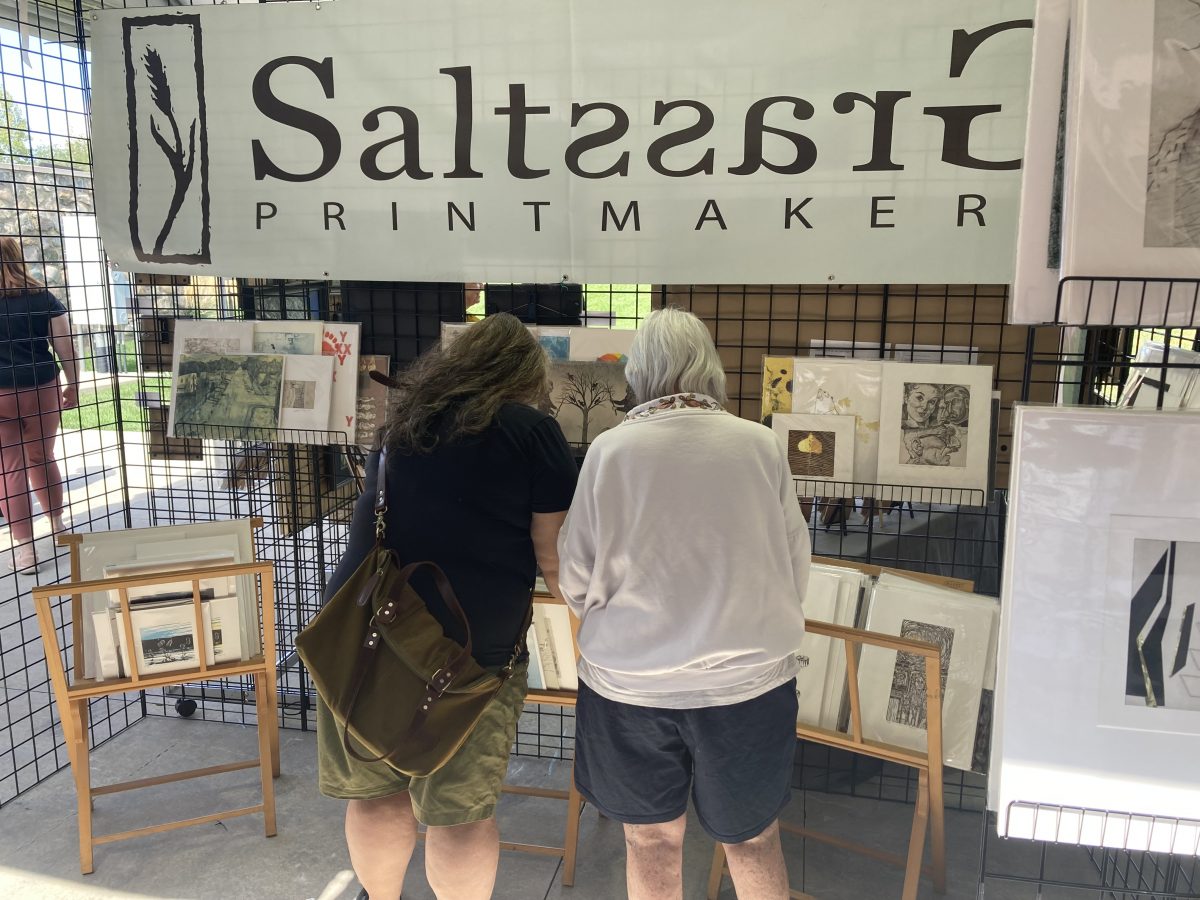 Stefanie Dykes, from Saltgrass Printmakers,  jokes about just being happy to cover her costs. At $200 a booth, one or two affordably priced prints sold from the likes of Sam Wilson, Sandy Brunvand or Dykes herself should cover it. 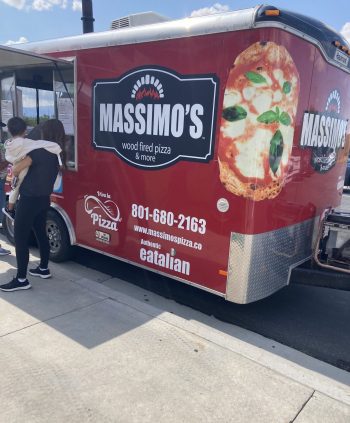 If you’re wondering if the wood-fired pizza you can get from Massimo’s is authentic, try out your best Duolingo Italian when you order and see if you can keep up with the Pisa natives.

The weather for Friday’s opening offered mild temperatures, crisp blue skies and cottony clouds. Food trucks provided tasty sustenance. Entrance and parking are both free, and the amenities of the surrounding hiking and biking trails, the Heritage Village, and nearby Hogle Zoo will encourage many to make a day of the experience.

Chipman has already booked to return next year, though the event will be a week earlier in the season. He doesn’t expect the venue will hold more than the 80 booths they arranged for this year, and so expects Art at the Park to become very competitive.