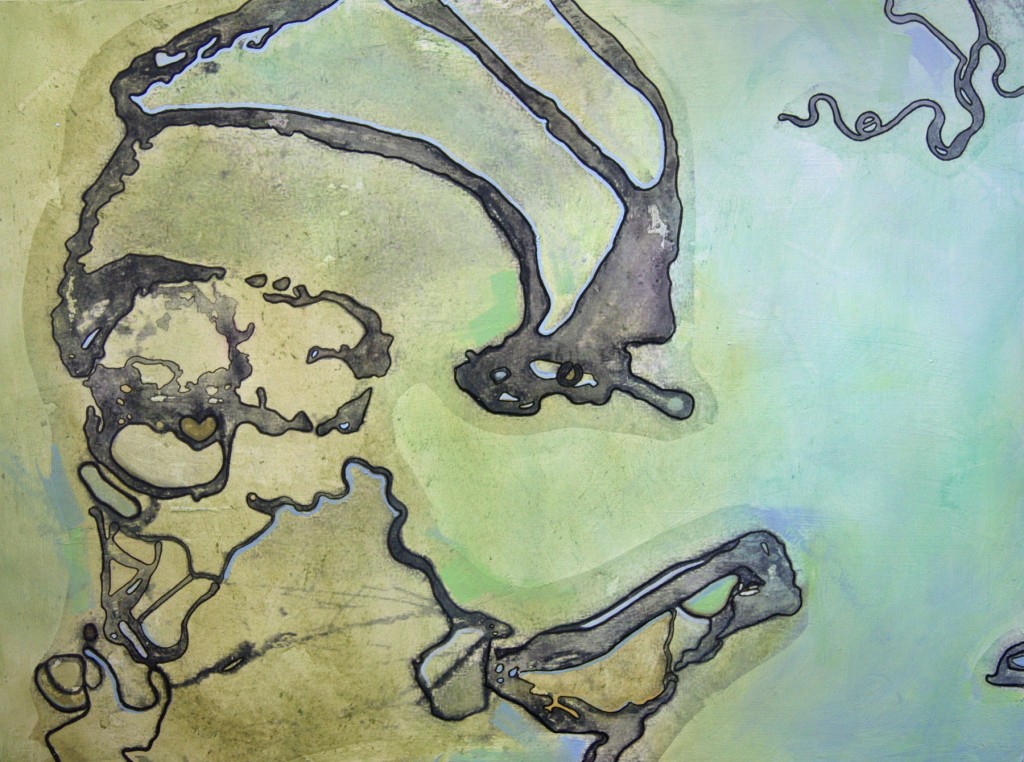 It hasn’t been long since Laura Hope Mason graduated from the U of U. This becomes apparent during her opening lecture for her latest show, now up at the Salt Lake City Library, when questions asked by her audience turn into shared recollections of classes taken, particular professors, and the lessons they taught. Then there’s her statement, where in place of the usual, incompletely grasped jargon, she offers a confident assertion of her intentions, accompanied by credible evaluations of the results. By then it’s also evident that this painter has talent to spare. Her autobiographical account of being recognized and singled out for special attention from an early age makes perfect sense standing among her works. There are 17 panels, and not a dull or failed effort among them.

In particular, with regard to art, “Abstract” has long since become an adjective instead of a verb. Even Mason, who backs up an account of how she abstracts her imagery from close observations of raw nature with specific examples—she enlarged a passage in “Call Me,” a corner of the whole that she particularly liked, and reworked it until it became “Cortex”—uses ”abstract” in speech as a particular category of painting, rather than a universal fact about the art. Yet it is the characteristic, indeed telltale evidence of the process of abstraction that draws the eye into these lusciously glazed confections, much as the evidence of its passage through the chef’s kitchen makes well-prepared food a promise of pleasures ahead. 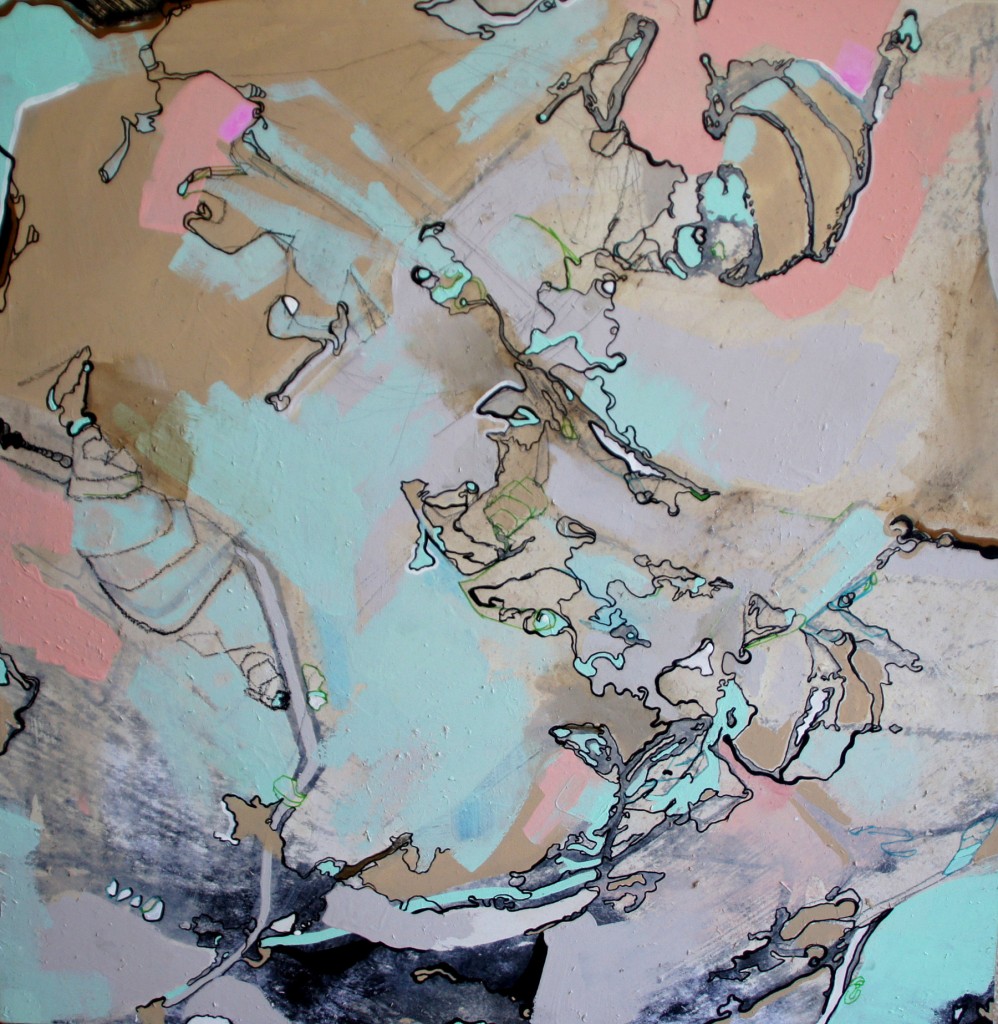 According to Mason, all the paintings here come from a trip she made back East to visit her husband’s family, where in a particular park, even in a single tree, she spotted what may have been insect nests that naturally both contrasted with, and yet complemented, the surrounding foliage. Enlarging her drawings of these features, essentially zooming in on particular lines and editing for emphasis, yields the linear component of an initial panel. Her eye for what will make a good drawing is indispensable thus far, but here is where her indisputable gifts become fully engaged. Tracing over lines, or just off them, and washing over passages with translucent glazes of luminous and shimmering greens, blues, and grays, she builds layers of color in which her work mimics both the processes by which Nature builds a forest and the way the real world builds an impression on our observing senses. When one panel feels complete to her, further contemplation of what she has wrought presents her with initiatives to explore further in search of the next painting. Sometimes an image takes on a narrative quality for her, and she labels it appropriately. Feelings that emerge from others suggest more emotive titles.

When Edgar Degas compared academic paintings to the newly available, photographic versions of similar scenes, what he saw called attention to the unremarked conventions of his medium. In response, he rejected what his eyes had learned to take for granted, such as the arbitrary way that subjects would be improbably contained within its borders, or that they formed contingent patterns across the field of view. Instead, he cut subjects off with his edges or allowed large, empty sections of ground to surround figures scattered like clouds in the sky. Those have become our expectations, scarcely noticed today. Instead, much of the drama of painting now has to do with the digital artifacts we see every day in cell-phone snapshots and advertising images that have replaced traditional photographs. Pixelation, once the bane of reproduction, assumes a deliberate role in Mason’s version of nature. Halation, the way glow from a bright surface spreads over darker areas in an optical system, invokes the way our minds presume the constancy of objects passing behind other objects, like the way a tree branch continues behind the leaves it supports. In “Clasp,” to take one example, a purely visual artifact surrounds its neighbors and appears to grip them, like a pair of arms complete with hands, making visible what holds together what we see. 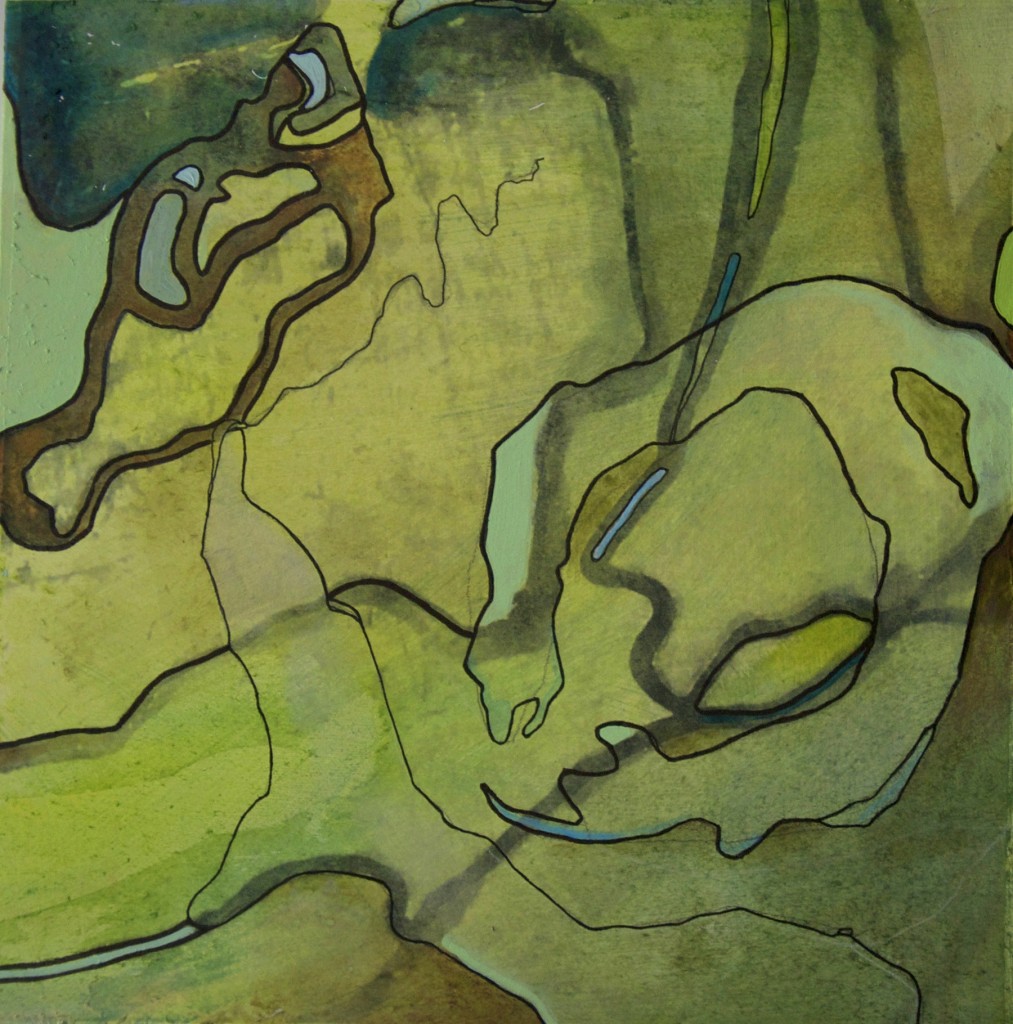 The only question is, which is the prize, which the box that it comes in? Do we gaze on the sensual world to find the unalloyed, aesthetic pleasure Mason finds so much of in her view of nature? Or do we try to see through this voluptuous screen, in search of the structure that makes it possible? Hers is a sunny view of nature, but not a simplistic one. The feeling of depth, the contrast of complex machinery against fields of open color, the dazzle of her dancing lines, and the hide-and-go-seek of forms within forms bring back to the present the activity wherein they began, and we find ourselves in a sunny wood, trying to look closely enough to finally see the trees.

Organic Environments: Abstract Paintings by Laura Hope Mason is at the Salt Lake City Main Library through May 1.