(This piece was originally published on Hal Cannon’s site Loose Cannon Boost. A companion piece exploring the nature of photography will be published in June) 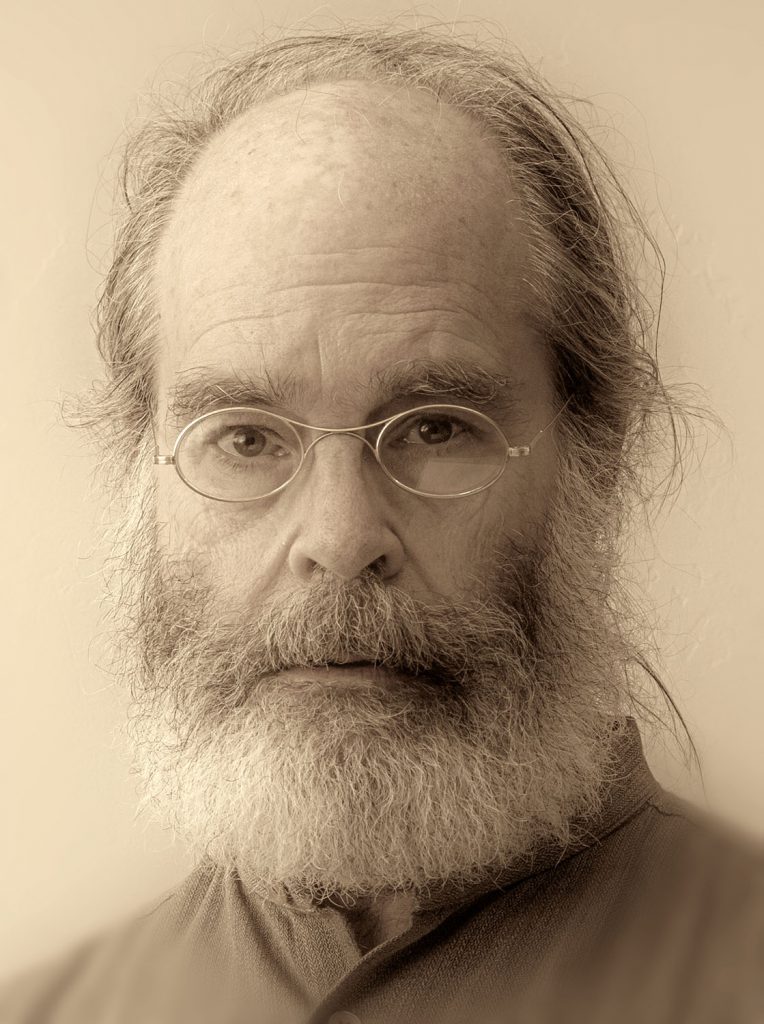 Edward Bateman, looking as if pulled fresh from the 19th Century he likes to haunt.

“So many questions…  I’m willing to dig in and play with anything that makes me smile and chuckle.” Edward Bateman

Just when I think I understand Ed Bateman’s images he throws a curve and I have to start all over.

You think it’s an original 19th-century studio portrait framed on a photographer’s carte de visite, a nod to the ancestors. Then you look closer and something is very wrong. You trusted the patina, the formality, the tint, the truth that we all assume photographs convey. But you are deceived: The child version of great grandmother Hedy (or is it great-grandfather Fred?) is posed next to a robot dog. It almost seems a travesty but you can’t stop looking at the image. What can you trust?

Ah yes, those bygone days when a robot would look you in the eye. That was long before those new fangled A.I. robots, uncaring, selfish, always focused on the end rather than the means. Those were the days. 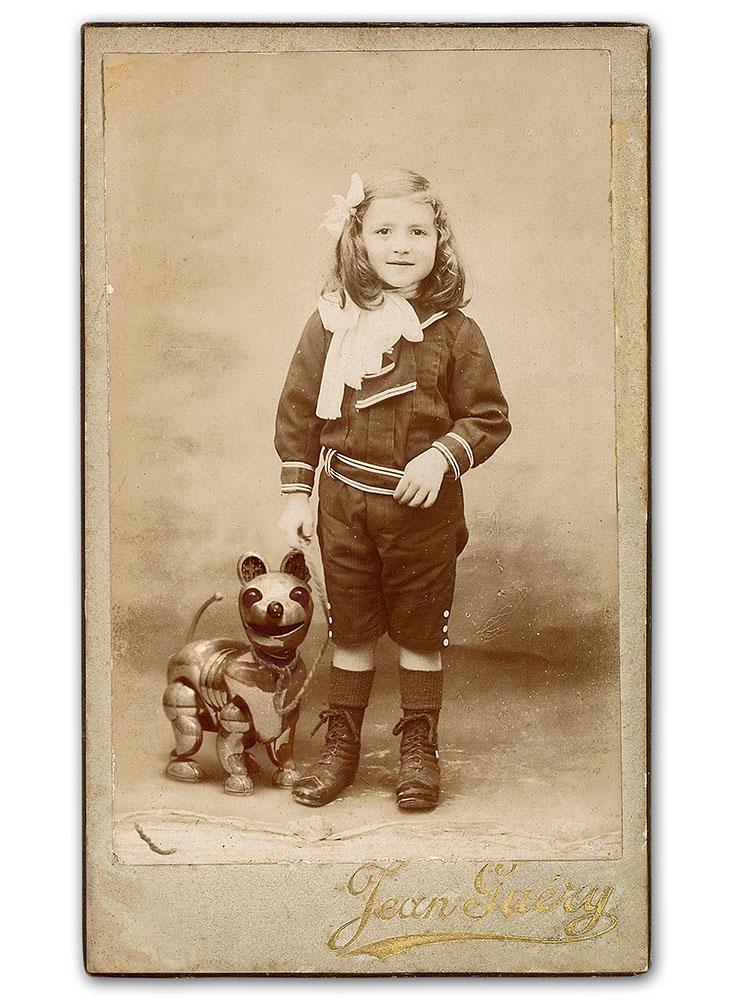 From Bateman’s Mechanical Brides of the Uncanny series

Ed is, first and foremost, my friend. I can trust he will be up in the middle of the night when I get restless and need to jot something down. After attending to the duties that woke me, I write him a note. I start with our nighttime code: hoot, hoot. I’m hoping he will see my hoot and respond, real time. I pretend I’m a night owl too but Ed is truly the one who hoots each night. I imagine him donning a mad scientist lab coat night in, night out,  alone, mostly uninterrupted, creating his fantastic images.

A guiding principle he tells his students at the University of Uta,h where he is head of Photography and Digital Imaging, “Creativity is caring enough about what you do that you’re willing to take risks.” Sounds simple. Try it.

‘A Toast to those who have gone before. May we stand on their shoulders to see what the hell’s going on.” anon.

Part of taking risks is moving on to the next challenge. I love his robots but when the series of ghostly spirits interacting with upright citizens came out, I got worried. Ed Bateman loves history. He likes to play with it. He likes to dig deep then throw a curve ball at it.  In this case he became entranced with the work of William Mumler who, in the 1860s, claimed that his photographs could bring back spirit images of dearly departed loved ones. Some believed in his ghosts, most famously Mary Todd Lincoln who commissioned a photo that shows a vapory Abraham standing over her.  Mumler’s veracity was finally challenged in court and his clients lined up on both sides. Was he a fraud or a hero? Mrs. Lincoln believed,  PT Barnum did not.  Who can you trust? 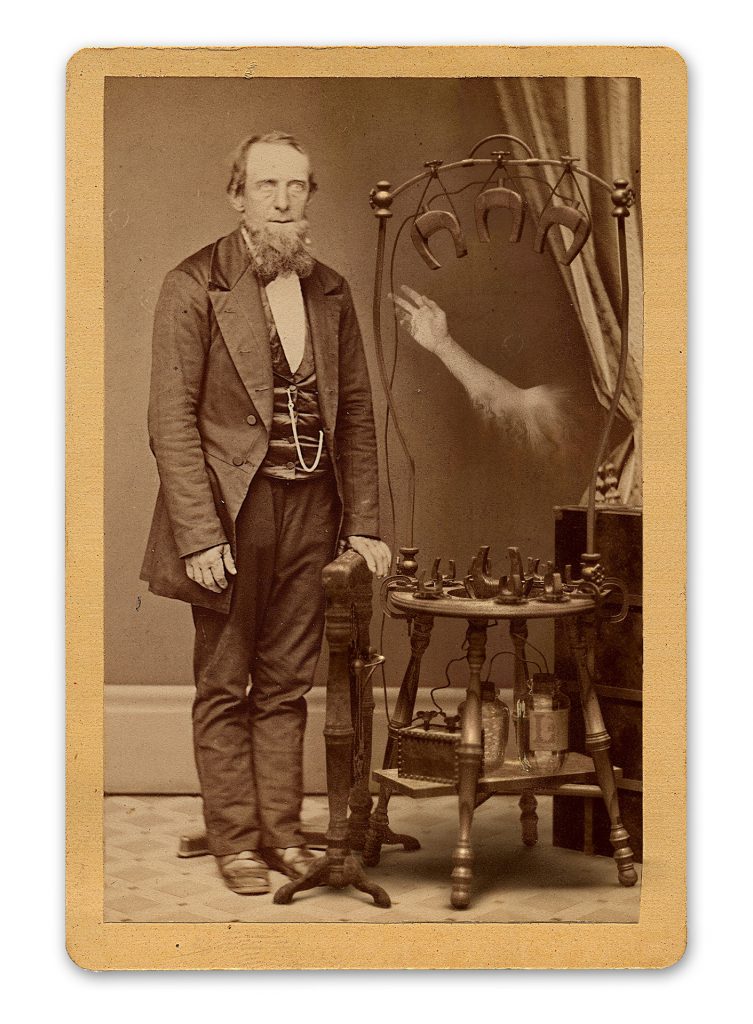 From Bateman’s Science Rends the Veil series (each boxed set contains 16 cabinet card sized facsimile depictions of spectral devices, a signed and numbered title card, and an information card describing this little-know chapter of the history of photography.

I’d gotten used to Ed’s play with the past but then all of a sudden he started sending me photographs of leaves. I asked myself, how does this fit into the Bateman progression? I assumed he’d changed direction and was now exploring still life but that didn’t sound right.  I should have known — there is nothing still about life.

The story of the leaves goes like this. He picked a leaf and took it to the dark room and set it on sheet of photographic paper in the dark and waited. Would the stored light within the leaves release that light onto the light-sensitive paper? His first test proved that indeed, something was taking place. But experiments can be capricious – luring you in with false hopes. When he left the leaves on the paper too long, they glued themselves to the emulsion. Shorter times and nothing happened.  But through repeated trials over several months, he found the balance. Images began to appear as the leaves released their stored light. Sure, there were chemical reactions at work and maybe the idea of stored light is more a metaphor than what actually transpired but there is no doubt, the leaves took selfies. 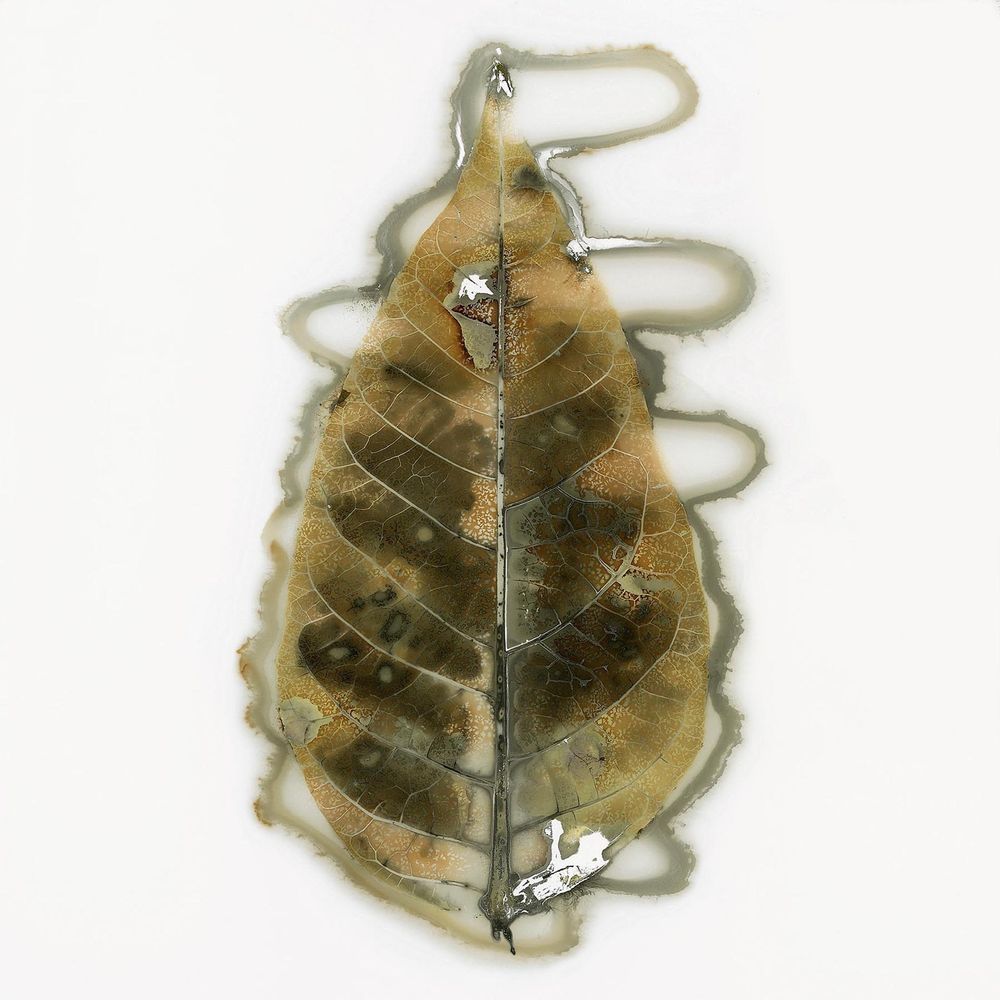 This all reminded me of pressed flowers in old books and how flowers give up a stain on the pages, something about a flowers life to mark their place in the book. Now it  started to make sense. These leaf images were just another conversation with the past in the same way that robots and spirits intercede with the timeless. What in life remains embedded in the object? It can be an old photo. It can be a leaf.  What, from the past can you trust?

Besides our friendship, there is a kinship we are starting to figure out. Like me, Ed had a mother who above all else, imbued generosity. Just ask Ed’s students about generosity and you might see tears well up. Ed gives and gives. Then he hides out and creates.

Another thing we have in common is a fascination with the past. But ours has nothing to do with replicating it, or being nostalgic about it. We love to know enough about the past to get in trouble exploring it, leaving our mark on it. I do it musically, he visually.

Edward Bateman is currently refining the design for the cover for my upcoming album, Nothin’ Lastin’, to be released in October. A few installments for Loose Cannon Boost over the next few months will preview my collaborators for this project. I’m proud of my brilliant friends who are willing to help out.

My first collaboration with Ed was the creation of 3hattrio’s Solitaire CD cover in 2017. When artists work with other artists it can become involved. There is so much rich territory between the musical and visual. It’s fun working with Ed. He often starts with a visual pun. Though puns might seem a trivial way to start, its often nice to start simple. Soon enough Ed is digging deeper, asking more questions, ones he does not have the answers for. It’s all in the details. Trust the details.

The problem with mixing words and images is that we often get impatient and want to skip over the stories and explanations and go straight to the visual. I could go much deeper into Ed Bateman’s art and all the various paths he has taken but let’s just get to the images. 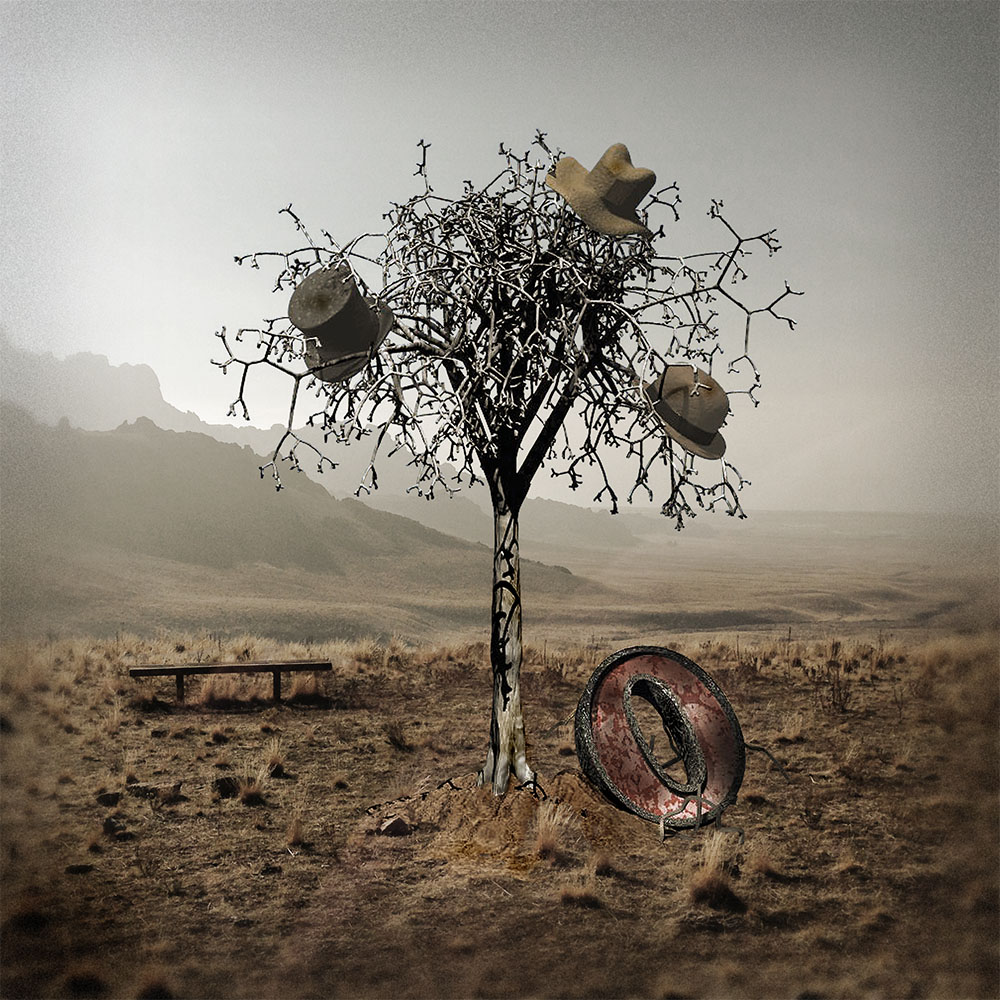 Cannon points out that Bateman’s works often start with a pun…. 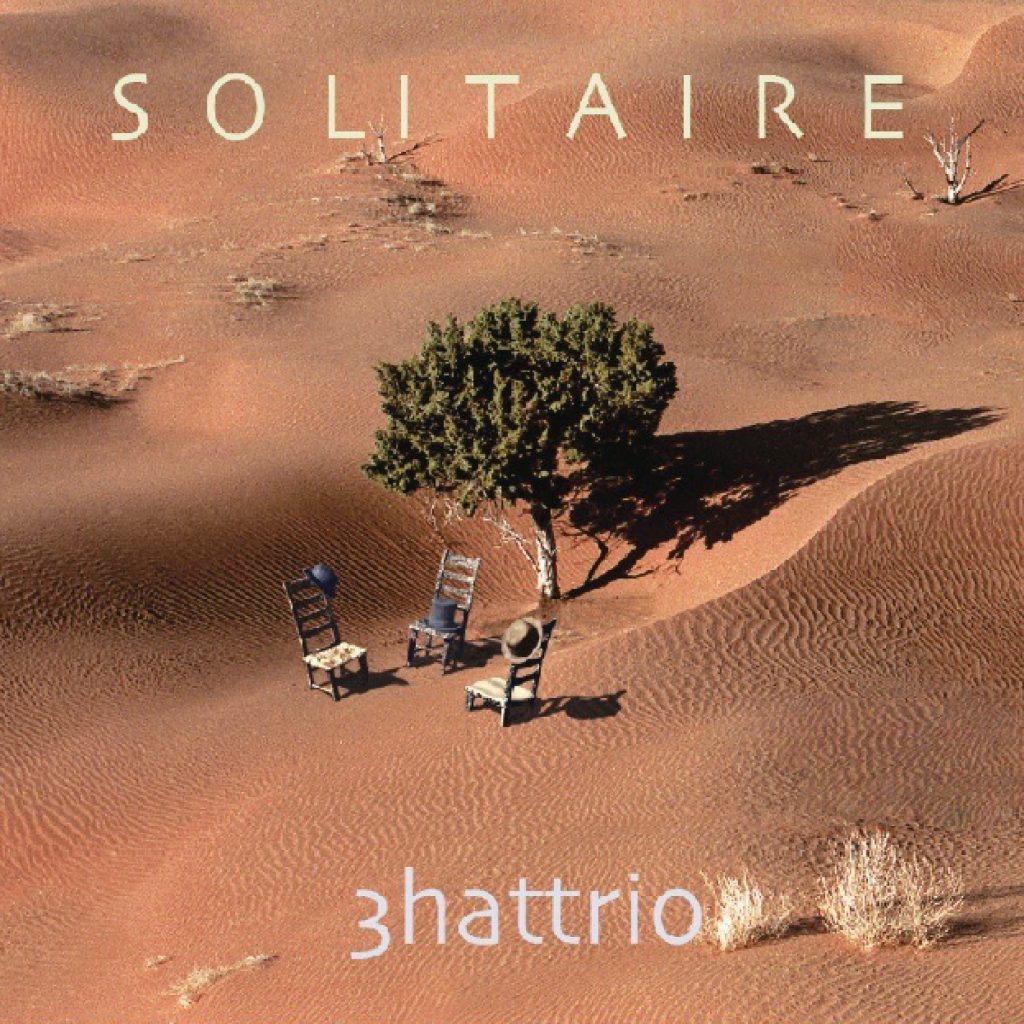 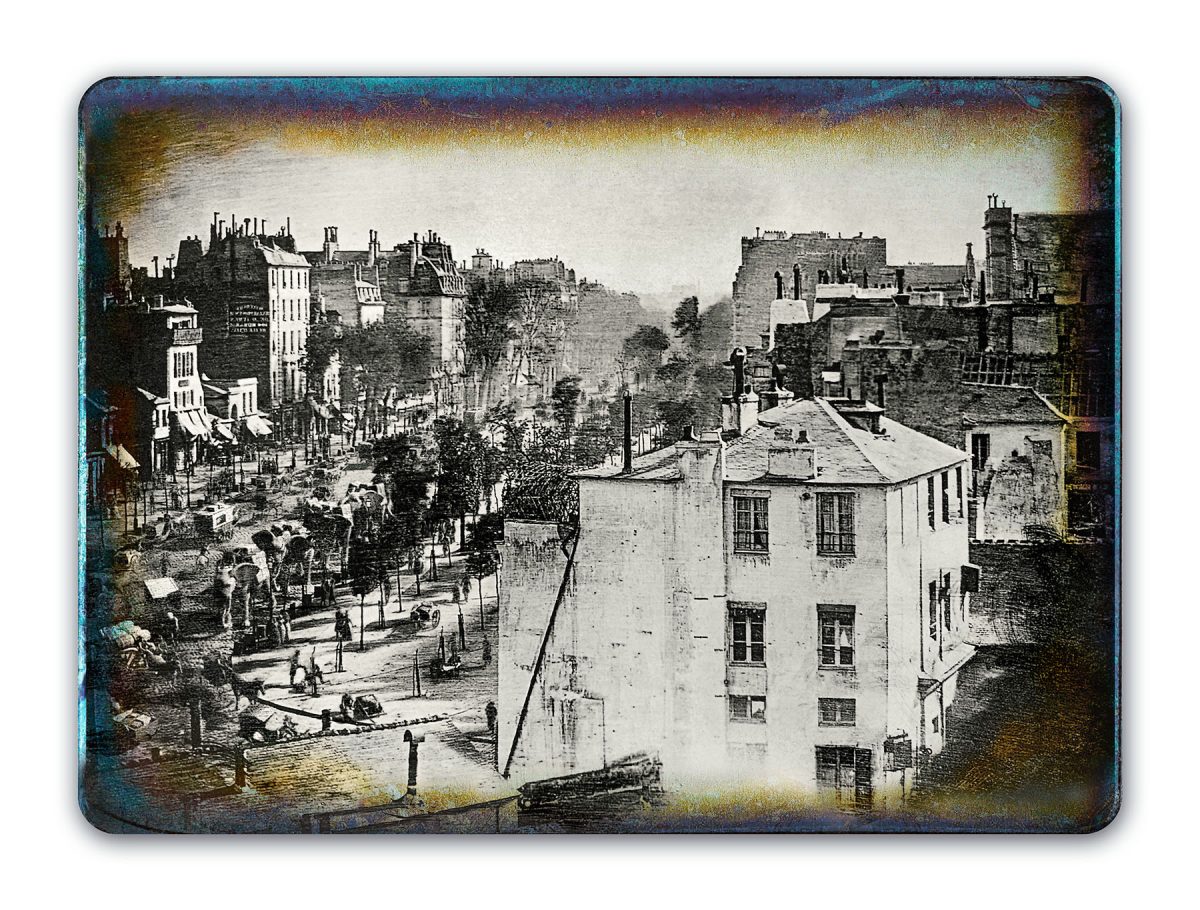 This is how Bateman describes this recent work: “an anomalously short exposure of Daguerre’s famous Boulevard du Temple image – that was the first photo of a human (a guy getting his shoes shined.) It was a busy street at 8am… and because of the long exposure (maybe around 15 minutes) – all of the other people, carts and carriages vanished. This image has all of that – including the use of pack-elephants which were used for cargo transportation in Paris in the 1839s. (wink)”