Marissa Albrecht’s Photos, Collages and Assemblages Provide a Playground for the Senses 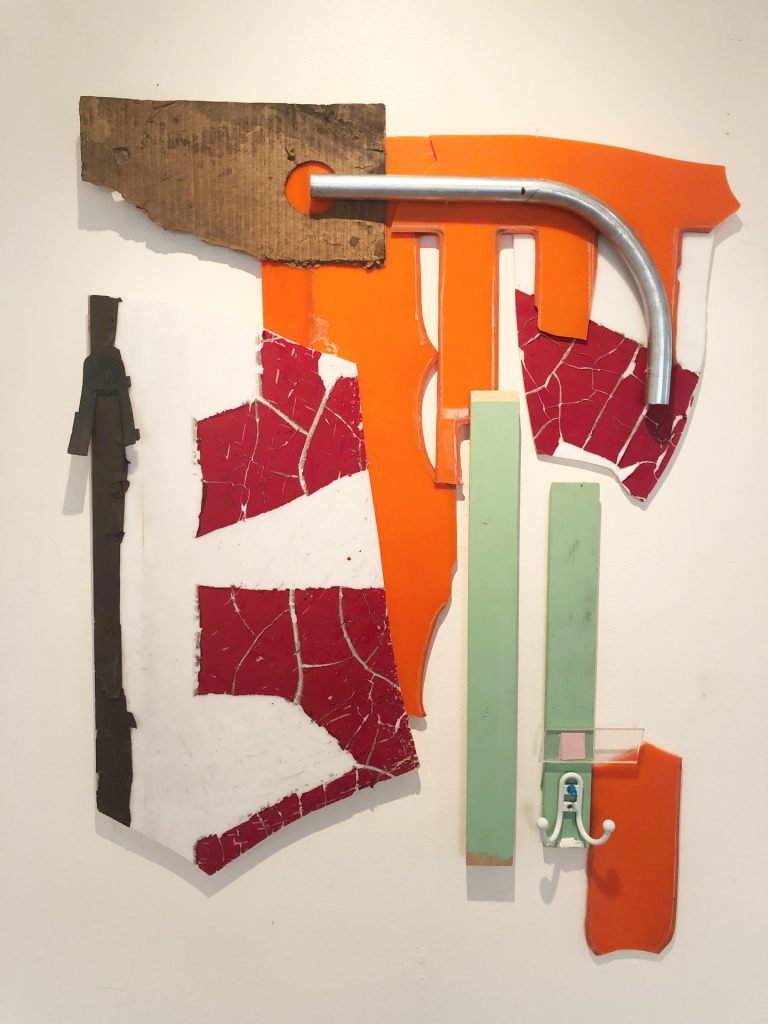 In her current show at Bountiful Davis Art Center, Marissa Albrecht uses two words that won’t be found in most dictionaries, though it’s not hard to grasp their meanings. One, “Restruction,” is the exhibition’s title; the other, “curation,” appears in her statement and names a step in her process. As a primary user of language, I maintain that everyone has the right to do this — to make up words that others will readily understand using standard rules of language, just as an artist uses paints and optical principles to invent objects that have never been seen. Not only that, but by employing her own new words, Albrecht is able to invoke nearby words that, because already better known, come freely to mind. To restructure something is to rearrange its parts, but restruction also suggests construction, destruction, and instruction, just to start what could be a long list. Curation is a word that falls freely from the lips of those familiar with the range of tasks undertaken by curators, but being undefined permits Albrecht to use the curator’s tools and concepts in ways that are creative, not just conservative. In the 22 works included in Restruction, she demonstrates both ways. 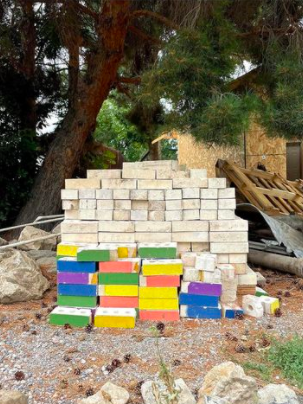 This image, taken in Provo, Utah, is part of a series of images in Marissa Albrecht’s exhibition at Bountiful Davis Art Center.

Collage may be the most timely and characteristic art medium of the modern age. In case that seems an overly ambitious statement, consider that gluing selected, preexisting imagery to a canvas, which is what Picasso and Braque did to legitimate collage when they were otherwise busy inventing Cubism, differs only by degree from another of Picasso’s supposed inventions, the additive form of sculpture, and then from assemblage, and then again from installation. That these are all just variously sophisticated versions of the same creative impulse becomes clear when seeing them all done in rotation by a single practitioner, such as Marissa Albrecht.

Albrecht begins Restruction with a brilliant, simple demonstration of how and why collage works: four photographs, all taken in mundane, local sites: two in Provo, one each in Kaysville and Orem. One is of a building being demolished, another shows stacks of used and reclaimed bricks. A third examines a building site wrapped in layers of fencing and various builder’s fabrics, while the fourth examines a dilapidated van parked in front of a new-looking, industrial garage. Each conveys a lesson in accidental and deliberate juxtaposition — placing side by side — of textured and colored materials. Perhaps the most subtle is that of the van displaying all the unique character resulting from age and hard use, while the newly finished building behind it is anonymous and could easily go unnoticed. Each of the four photos underscores the same point: that collage makes aesthetic use of the universal fact that we inhabit a visually chaotic world, in which every encounter offers a possibility of beauty. 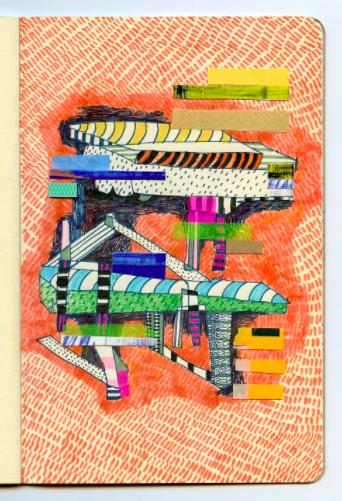 The drawing and collage piece “7.99” comes from one of Marissa Albrecht’s sketchbooks.

There is a collage convention wherein an occasional odd word that appears among the selected elements is used as a title. Thus a label or part of a wrapper reading “7.99” or “Organic” or “Red Locust” may lend the overall work a title: one that would then serve only for identification. Other conventions range from the place where the material was obtained to a chance word that invokes the work in the mind of the artist. These titles do tell us something more, of course — they signal that the elements of the collage do not represent anything but themselves. These differ, then, from pictorial collages where the chosen elements add up to a fragmented or even semi-cubist image of a subject, or from the sort of game played by Picasso and Braque where the label of a wine bottle was stuck on a painted bottle, or a printed image of rattan fabric was used to convincingly depict a cane chair seat. And all this is fine in theory, but someone here has thrown a monkey wrench into the machinery; few of the works at BDAC displaying these phrases are actually titled with the phrase they contain, though another hanging nearby may be. It’s possible that the artist set out to further undermine assumptions of order and meaning that are already under assault by recent art, or to send a knowing wink to the more meticulous students among her audience. Or it’s possible something simply went awry during the hanging. After all, if several things are in correct relative order, but one more has been added later, from that point they’re all subsequently wrong thereafter. 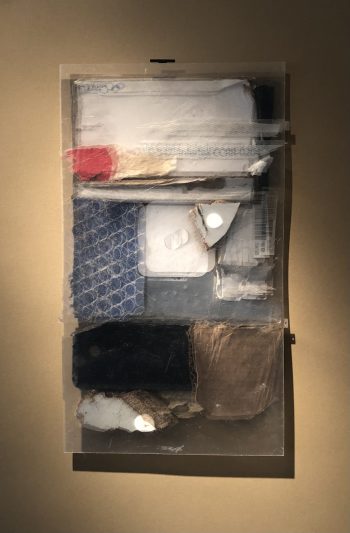 The layering of plastic in “River Run” makes the work appear blurred, both in person as well as in a photograph.

Meanwhile, in using pre-existing materials, which no matter how anonymous will usually invoke a sense of familiarity, Albrecht appears to subscribe to an approach favored by some other excellent local artists, including, though not limited to, Liberty Blake and Colour Maisch, who create their own styles of non-objective compositions using otherwise similar found materials. Here in America, we tend to call non-objective art “abstract,” which term is problematic, but in Europe they have a more accurate name: concrete art, meaning it was formulated not in service to some previously-known visual, but rather to be a new and original sensory experience. This does not mean there won’t be familiar experiences in new combinations; in fact, that’s part of the reason for reusing familiar materials. Albrecht, who as described above uses her skill to form visuals that illuminate precisely what she’s doing, does so again in an assemblage titled “River Run.” Here, an overlay of optical plastic produces a sense of nervous life and motion, along with an exaggerated appearance of depth similar to the way the vistas in conventional art seem to extend back into the wall. Only no mere painter could make that depth so convincing.

In Marissa Albrecht’s Restruction, then, what we have is a playground for the senses, in which all the mechanisms our eyes and minds use to determine what lies around us are treated somewhat like they were when we were newborn children, and instead of being expected primarily to identify what we encounter, with the goal of giving it a name, we lived in a constant state of wonder at how colors, textures, and shapes came together to create all that we saw.