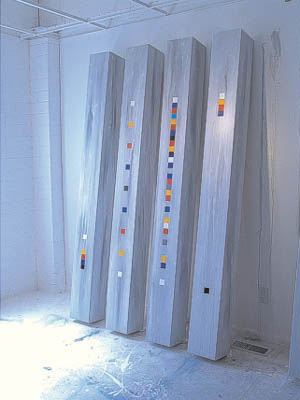 Part of my role as Salt Lake Gallery Association President is to help assist artists, represented by member galleries, with the advancement of their careers. Towards that end, I was excited to hear of an exhibition opportunity for Salt Lake City artist John Bell in New York City, and was pleased to be able to review the works in progress and provide a statement for his press release and the following review.

I met with Bell several times at his studio and observed the works in progress and completed works. During those meetings and discussions, several things became apparent. One of which is that John Bell is the real deal. He has consistently worked toward the development of a mature artistic style since graduating from the Art Institute of Pittsburgh in 1987. He had, however, held back from putting his work on public display until he was confident that it was ready. In June of 2003, Bell participated in a group exhibit at Chroma Gallery. His paintings all sold within two weeks of the opening. This led to the “Drinking, Smoking and Dancing with the Muse” solo exhibit at Chroma where 9 of 16 pieces were sold. This in itself is a good indicator that Bell had prepared well and that his work was ready for exhibit.

Bell has now secured an exhibit in New York at the penthouse apartment of Sandie Tillotson at the Mandarin Oriental at Time Warner Center, overlooking Central Park. He has meticulously designed and created an impressive body of work for the exhibit, consisting of three-dimensional canvases, which he calls (re) DEFINING SPACE. 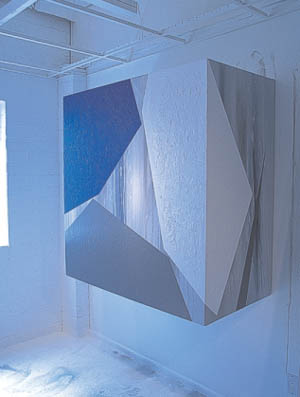 The paintings are largely architecturally inspired. Twenty-nine separate canvases comprise thirteen pieces; each piece has been specifically designed to relate directly to the architecture of the exhibition space.

Several years ago, Bell had the good fortune of purchasing a home designed by Salt Lake architect and architecture professor, John Sugden. The first thing Bell did was remove all the architectural degradations added by previous owners to uncover the purity of the original Sugden design. Much of this restoration work was personally accomplished by Bell. While hand painting the row upon row of steel I-beams of the roof structure, inspiration struck. The geometric purity of the exposed linear steel beams and juxtaposed steel roof deck, and the ever-changing nuances of the white paint left an indelible mark on his mind and spirit. The pristine structural elements seen from different angles and at different times of the day and night, with varying light levels, provided ever-changing shades and tones of white on white, which fascinated Bell. Those impressions, churned around inside the artist over time, and finally emerged as the catalyst behind the (re) DEFINING SPACE paintings. 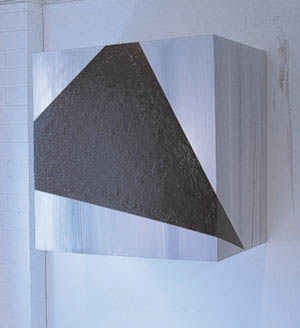 Another aspect that became apparent as I became further acquainted with Bell and his work, is that he is a perfectionist – as evidenced not only in the crafting of his three-dimensionally shaped canvases, but also in the application of the paint. The stretcher bars are meticulously cut, joined, and squared. The canvas has been expertly stretched and attached using upholstery “tricks”, yielding clean, tight seams that have been visually minimized. The acrylic paint washes are carefully “un-controlled,” providing a neutral yet interesting background for the fields of colorful geometric shapes, which form the abstract imagery. The lines of the colored shapes are straight and true, even as they extend around the corners of the three-dimensional canvasses.

The twenty-nine canvases that comprise the thirteen pieces of the (re) DEFINING SPACE series have been just as carefully and meticulously designed and choreographed to fit the exhibit space as they have been constructed and rendered. The canvases are designed to be wall hung, free standing and leaned against walls. Each piece has a strong individual identity; yet they all work together harmoniously as a complete and stunning whole. 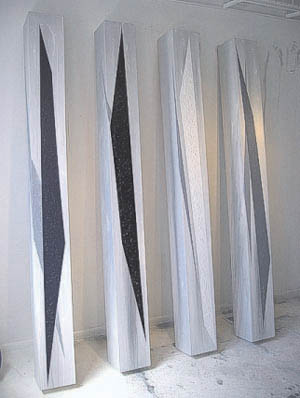 These hard-edge and computer designed shapes are the antithesis of Bell’s previous penchant for abstract expressionism, yet when combined with the visual contrast and sense of freedom provided by the background washes, present a melding of geometric color-field painting and abstract expressionism.

Yes, Bell designed the pieces and the overall organization of the exhibit on the computer. Bell meticulously measured the exhibit space and carefully created a computer generated floor plan and interior elevations with which to study the overall space and the individual architectural elements to be used as backdrops for the paintings. The computer allowed Bell to quickly render many options for forms, shapes, and color combinations and develop the optimum design.

However, even though the design was created prior to paint ever touching the canvas, Bell did react intuitively with the shaped canvases, development of washes, applications of paint, and building of surface textures during the painting process. “Things evolved and changed along the way,” says Bell of his working style, “much as in abstract expressionism. The materials interact with the mind, eye and hand, allowing for spontaneity. Aspects such as the way a color shape turned a corner and extended across the next plane was revised and resolved during the painting process. The washes are very spontaneous even though I’ve learned to control them with various techniques.” 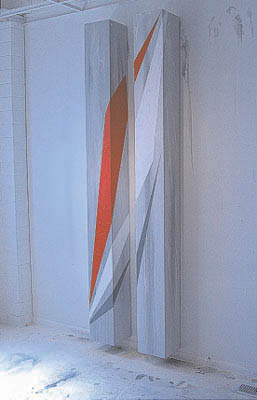 The texture of the colored shapes is also an important part of the design and provides tension as the intensity of the textures build toward the center of the composition. The eye of the viewer is led towards the apex, creating a strong focal point.

To learn more about these pieces, one needs to spend time sitting, quietly observing and feeling their presence. They begin to come alive with changing light and seem to take on a “living-vibrating” aura. Moving around the pieces reveals new variations and other relationships between elements and additional visual interest. One can easily imagine Bell, sitting and looking, contemplating, walking around and looking, then springing into action with brush in hand, diving into another session of painting.

I am impressed by the scale of these works, the amount of thought and concentrated effort that has gone into their design, the fine level of craftsmanship and attention to detail expended in their execution, and the speed with which they were created. Bell completed the series in approximately one month, and at the same time continued to run his business. This says a great deal about his level of commitment. 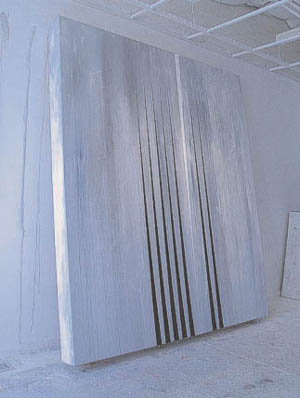 “I believe it is important for an artist to bring something else to the table besides the actual work,” Bell relates. “Gallery owners put so much time and money into representing an artist, I want them to know that I am there to help support the effort. I have the graphic skills to put together the promotional materials that make the artist more accessible to potential buyers and collectors.” Indeed, Bell has created an impressive and entertaining Press Kit and mini-portfolio for use by galleries in promoting this body of work. “I want to provide enough insight into who I am as an artist and person to help spark the viewer’s interest and perhaps get them to take more time to understand and appreciate the work.”

Yes, John Bell is the real deal. He has prepared well and developed his technical skills, understands his place in art history, waited until his work was ready for public exhibit, has the discipline and commitment to back up his words with actions, and understands the importance of establishing and maintaining the gallery/artist relationship. 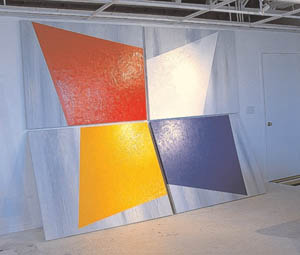 “Never get locked into one way of doing things,” says Bell, “stay open to new ideas and directions, be expansive in your thinking, and ready to go with the flow of creativity.”