I Believe In All This: Casey Jex Smith at Writ and Vision 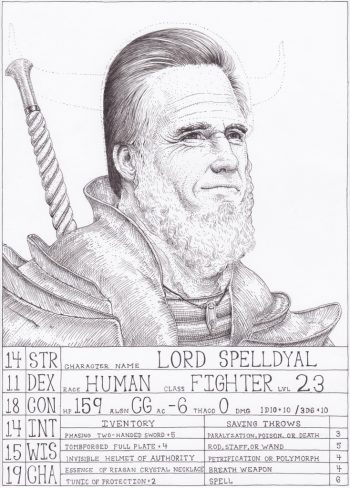 When 15 Bytes first encountered Casey Jex Smith almost a decade ago, he seemed exactly the sort of artist the world craves and Utah schools, almost alone in academe, excel in producing. At the premier U.S. art schools, from Yale to the RISD (the proximity of Yale to Rhode Island symbolizing the breadth of U.S. art education) a graduate may emerge a master of management skills who draws like a 6-year-old, while Utah instructors believe in the liberating power of draftsmanship. After all, what use are good ideas to someone with no voice to share them, nor even the power to manipulate them within the triumvirate of his hand, eye, and mind? Smith plays his part by drawing like an angel. If he can see it, he can capture it with a line so precise, yet lively, that nothing less than the animators’ term wire model adequately describes the solid object that seems to float beneath the surface of his art. And if he can’t see it? His encyclopedic memory of appearances and recombinant imagination will convince his audience that he can.

So what has the intervening decade brought Casey Jex Smith? Based on the evidence of Wars and Rumors of Wars, one answer would appear to be computer games. In a number of witty presentations, ranging from the engineering draftsmanship of “Sword of Laban +5 and Gear” to a trio of war game character cards, featuring real-life heroes like Mitt Romney (“Lord Spelldyal”), to the autobiographical “Encumbered,” in which a self-portrait game character stands beneath a pyramid of all the attributes a young husband and father (and artist) found his new role requires, Smith translates the details of his life and worldview into the literary mode of his generation. But that might well not be new: BYU, where he took his BFA in 2003, has one of the leading schools of animation, a key ingredient in computer gaming, and if it wasn’t apparent in his earlier exhibitions, that may have been a graduate’s caution in the face of consumer prejudices that scored his interest in art history ahead of a love of gaming.

In conversation, and in these works, it emerges that what real-world experience has taught Smith are those things BYU and a Mormon childhood could not: what it’s like to go it alone, as every artist must, but in a Gentile world. As he lists the art capitals he’s shown in—New York, Paris, Florida, Texas—and how each tried to contour his skill set to their niche taste, it becomes apparent why Writ and Vision gallery in Provo still appeals to him. Religious art translates easily from place to place, as the plethora of Hindu, Zen Buddhist, Hopi, not to mention Greek and Egyptian, galleries in museums around the globe demonstrates. But despite his genuine piety: “I believe in all this,” he says, sweeping an arm around the gallery, Smith’s primary subject isn’t the theology of the LDS world, but its culture. In landscapes like “Lehi’s Vision” and set pieces like “Vultures,” where his skills and interests achieve their apotheosis, it’s Thomas Child’s Gilgal Gardens sculpture of Joseph Smith as sphinx, not Heavenly Father, that presides over a labyrinth the viewer’s eye can wander through as though all the world’s dungeons and dragons were visible at once. 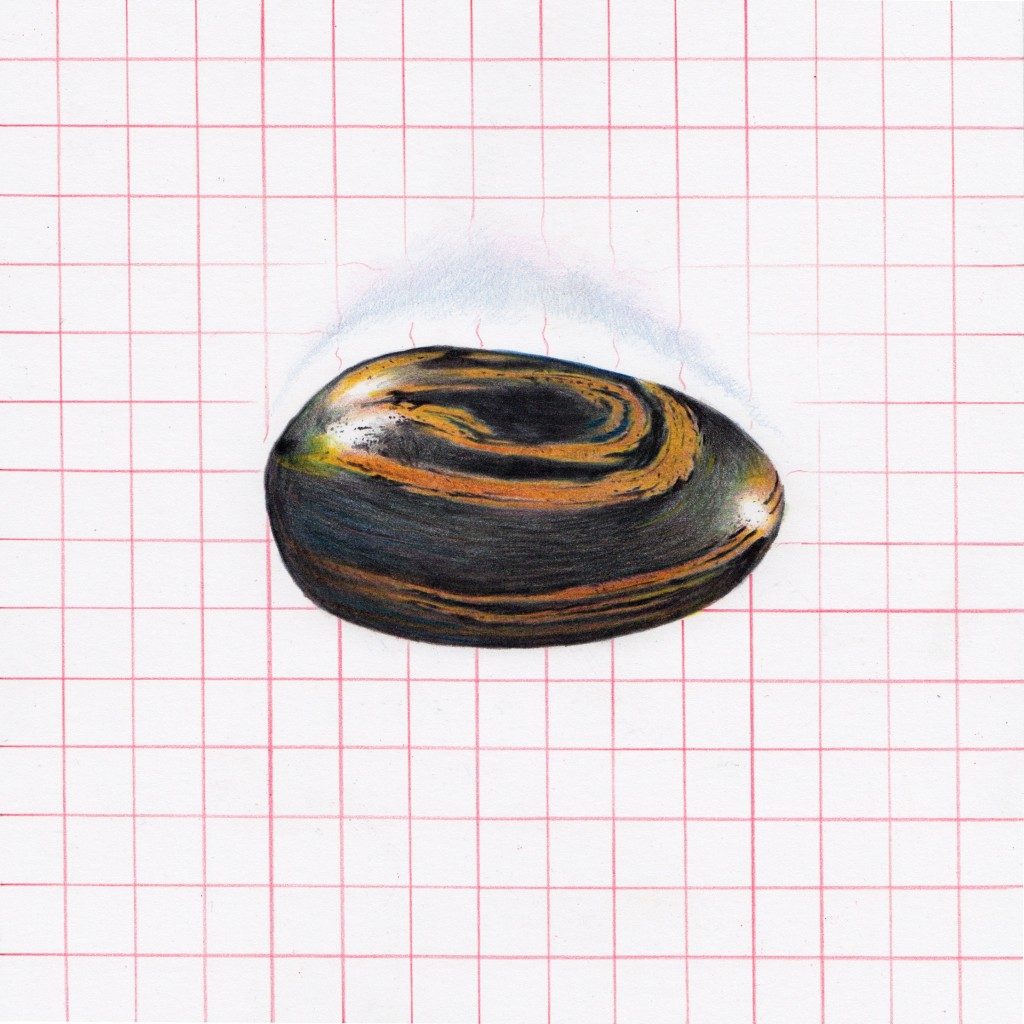 Art is always best when it contains an autobiographical influence, and Smith’s best work in this show is the wonderfully ambiguous “Sisyphean Shards,” which summarizes his art experience and the history of the world in one gigantic, theatrical stage setting. Arrayed like so many scenic backdrops, the history of failed human aspirations stand cluttered by the detritus of one man’s peregrinations among them. After trying to take in all the fragments of vanity on display, and perhaps noticing its resemblance to King Tut’s janitor’s closet–like tomb, modesty may send the critical viewer back to study some of the works, previously thought straightforward, that surround it. That portrait of Mitt as bearded warrior? Is his “invisible helmet of authority,” with its Viking horns, to be taken seriously, or does it smile at pretension? That Seer Stone? Does its sheer beauty distract from its utilitarian role, or complement the task it served? It would appear that Casey Jex Smith, master draftsman, might just walk a razor edge between the hermetic land on which he learned to walk and the degraded commercial waters in which he must now swim. 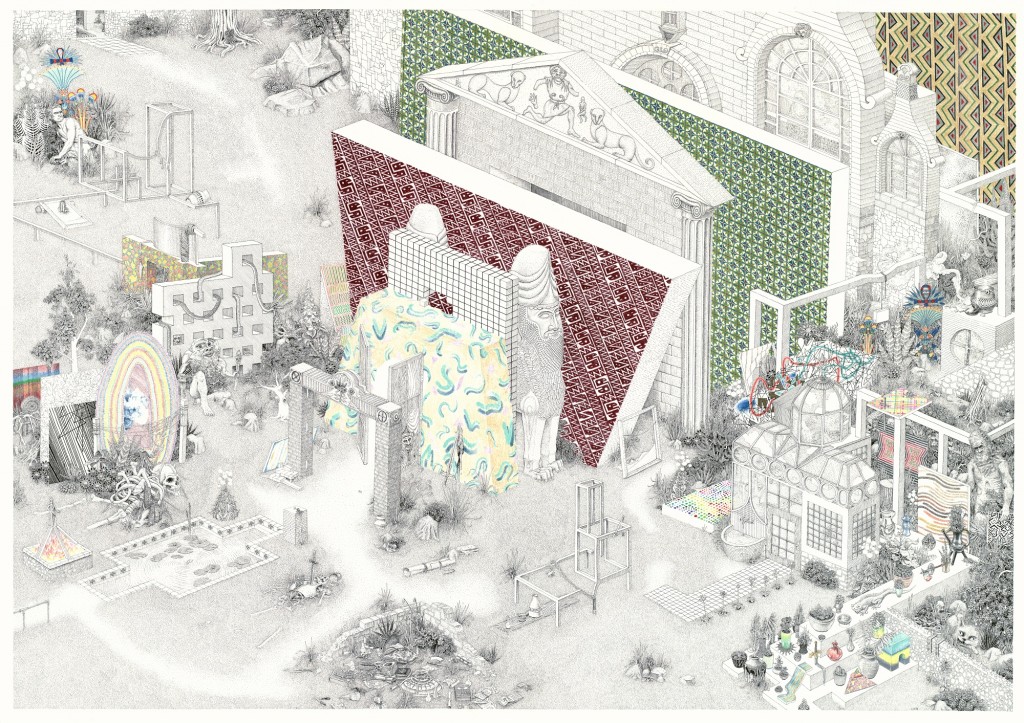 Casey Jex Smith: Wars and Rumors of Wars is at Writ & Vision in Provo (274 W. Center Street) through November 2.
This article appears in the October 2015 edition of 15 Bytes.