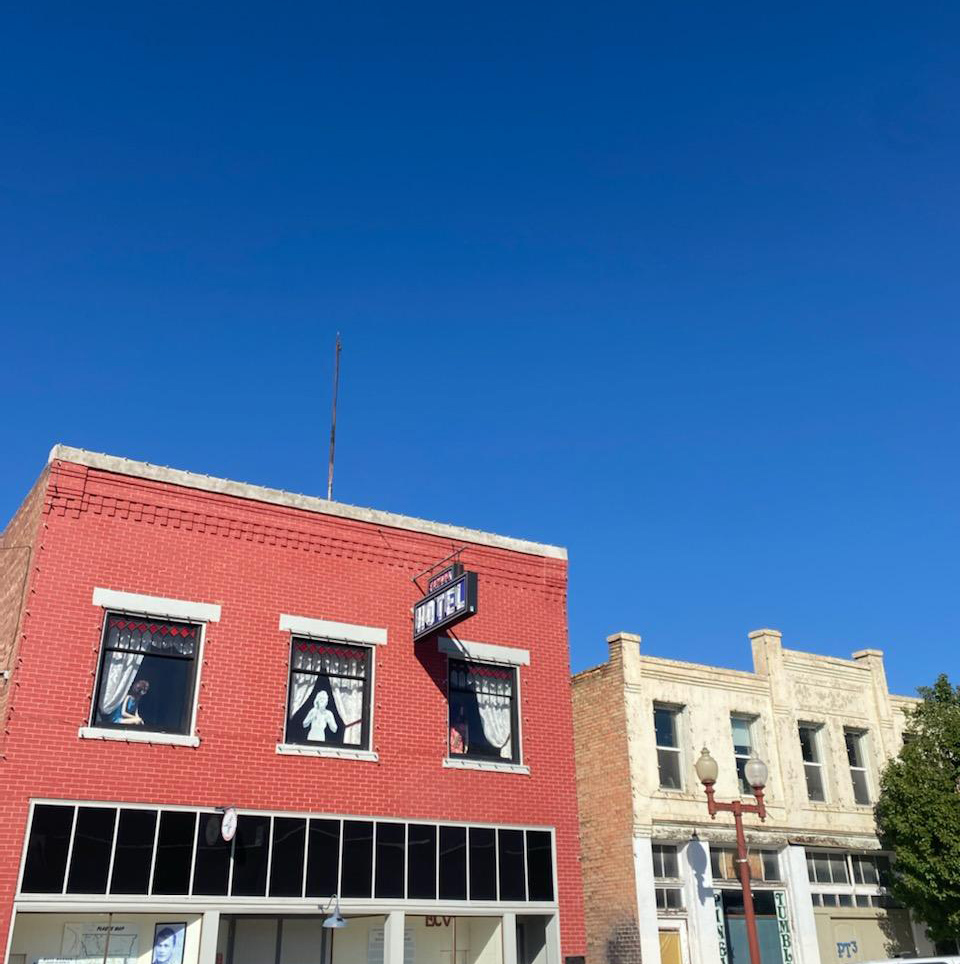 Marilyn Monroe peers down from the Carbon Hotel on Helper’s Main Street. Photo by Julia Rossiter.

Helper is like a movie set, a town of moving, repeating stills: repeated rows of paintings; repeating storefronts. It is full of movie-set tropes, like the Balance Rock Eatery servers, daily dressed in identical red sateen dancing-hall dresses; or the rainbow-colored marquee at the Strand Theater; or Marilyn Monroe peering down from the window of the Carbon Hotel (though no John Wayne, who once owned a non-union coal mine here); or the clean, perfectly blank walls of the waiting-for-your-Amtrak train lobby  — waiting for the brilliance of original murals, if the railroad companies would, wisely, allow  — calling to mind a hundred scenes of welcome and farewell.

The artist colony of this former coal town is basically along its two sides of Main Street: like a cowboy movie set, like two train tracks running beside each other, a gap between. All the buildings are made of bricks, still hovering in some orangeish-red earthenware amber of time. 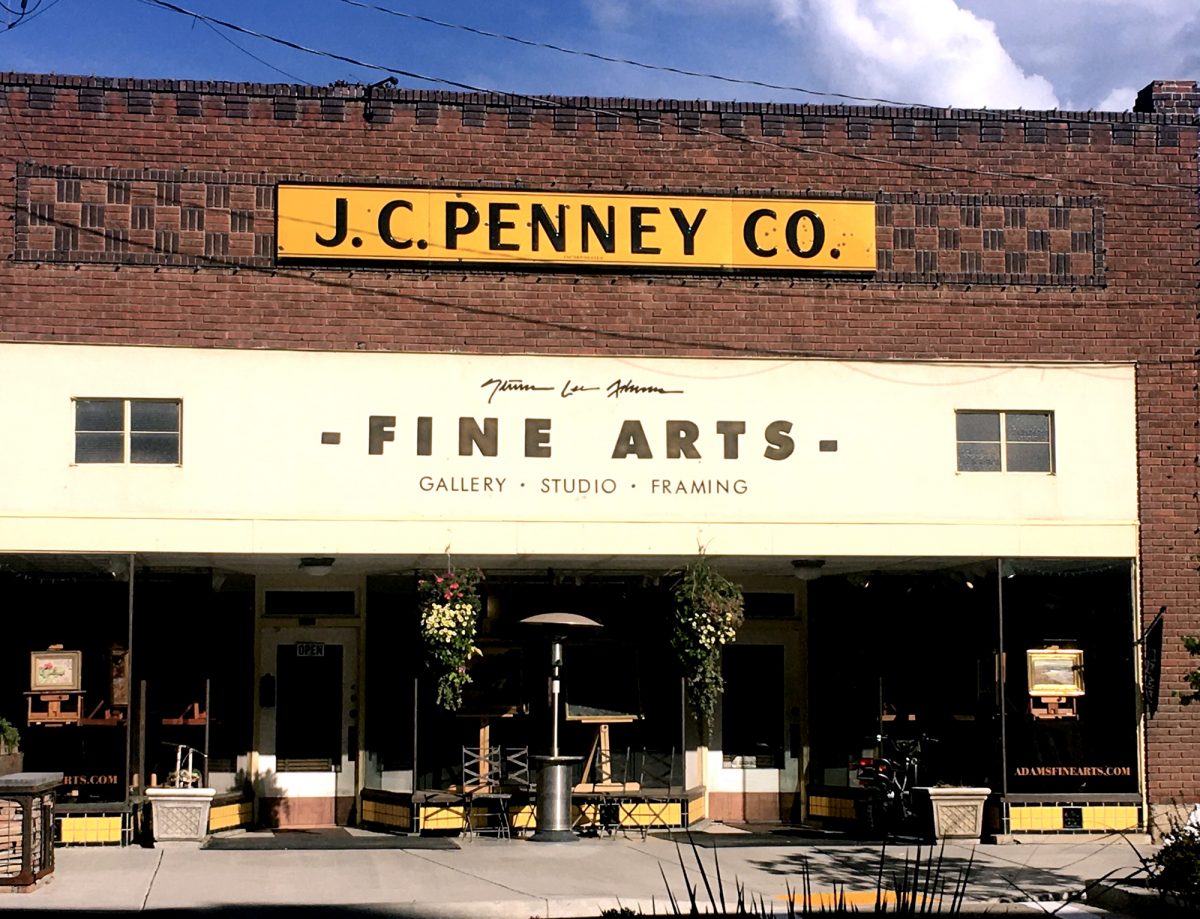 The former J.C. Penney store, which now serves as a studio for artist Steven Lee Adams

Soon after you turn into town, you find Steven Lee Adams Fine Art. A big building, with its historic yellow ceramic-on-metal J.C. Penney Co. signage, its Butch Cassidy-era bullet holes, is filled with surprises; it brings you to adventure. You stand beneath extremely tall tin ceilings, beneath a wooden boat handmade in Wisconsin (“we tested it out; really precarious in water,” Adams, the artist, says); a handwoven Navajo rug as large as some lawns, hanging on a wall; old dark Arts & Crafts chairs which look designed for brooding; one perfect blue-and-white Chinese vase with a top rim as tall as your chin. Also, in a few places, animals once alive: standing among handmade furniture pieces and frames (former trees) and countless paintings trying to capture otherwise-lost living time, is a mature, preserved elk. It looks majestic, arrived.

Most paintings in here are Adams’ — it’s more studio than gallery, he says — melting, impressionist, works that can have a sudden and startling beauty. At the center of the historic building, Adams is working now on a series of paintings of a trestle at varying times of day/year (think Monet). Like a filmmaker comparing/choosing an ideal time, Adams has all three canvases one above the other, ladder-style; he is completing the third. During some months of the pandemic. Adams says he worked sometimes from photographs, in pastels, though never working exactly from the photograph, usually focusing on only one part. In the oil-pastel “Guidance,” one dancer with a worried expression is about to lead a younger dancer through a move; in another, “Backstage,” five dancers dance, but as if in a cave of dark: the stage’s thick curtain has blocked out almost all light. Four dancers dance alike; one’s foot is moving differently. Wonderfully, accidentally, she stands out. 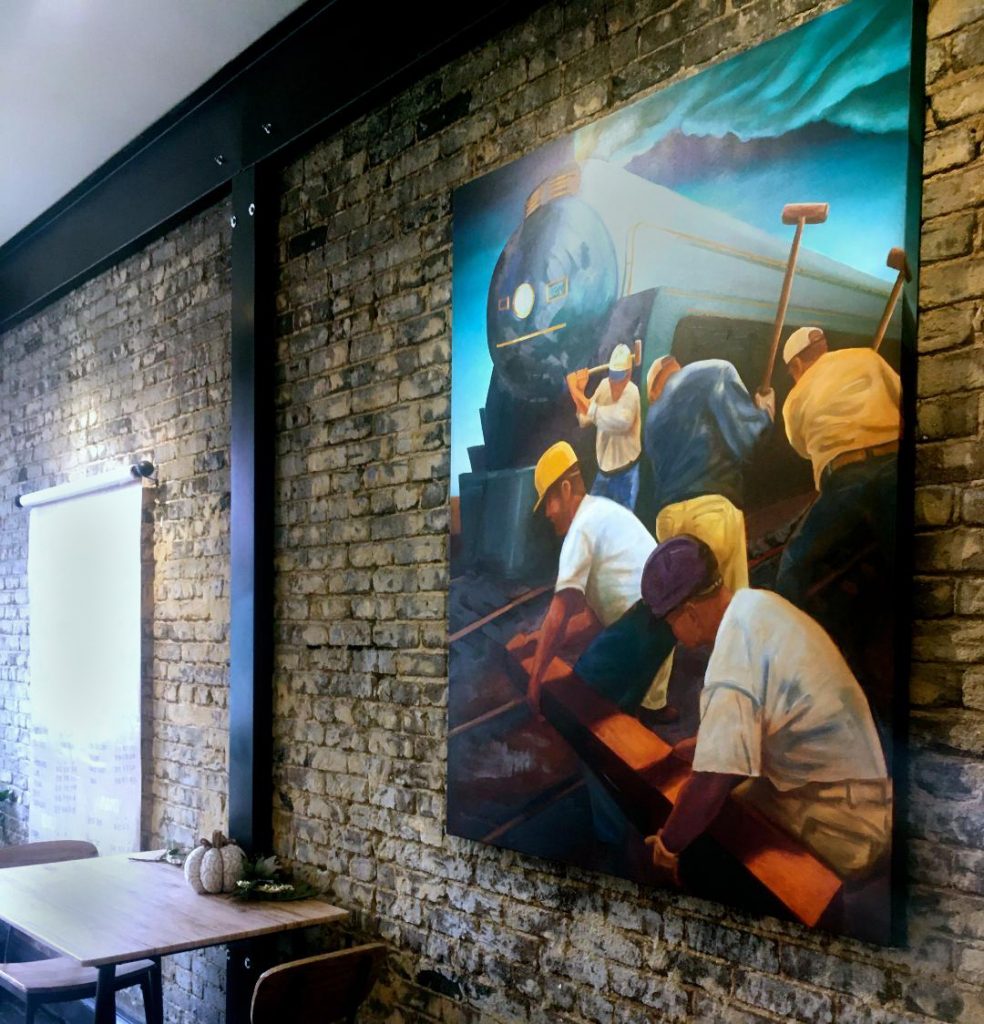 Painting by Thomas Elmo Williams at the Happiness Within Cafe. Photo by Rebecca Pyle.

In Helper, coffee shops can be dramatic and surprising too: Happiness Within on Main Street is cozily named, but its feel is Chicago loft/gallery: chalky, exposed brick, dark dull wooden floors, a narrow ramp leading you on a long, single-hand-railed walk up to its distant serving counter. Near its entrance are two almost square armchairs – new and divinely soft – and a large painting by Thomas Elmo Williams (Williams is described by The Park Record as “once a coal miner, now, a prolific painter”). Williams’ work is the sort of work that could astound as wall murals in a train station; it astounds now, in a coffee shop. At the top of the coffee shop’s ramp, there are black and white photographs by Jason Huntzinger, images overwhelmed by clouds (“San Rafael Swell,” “Ruins of Coke Ovens, Columbia, Utah,” “Green River”): their huge froth of clouds remind you of steam locomotives, and espresso machines.

When you ask about a frappe at Happiness Within, you know you are with an artist-barista when the answer is: “I told someone the other day there really is no such thing as ‘a straight espresso’ – there are so many variations. And a frappe is hard to describe.” Later in the same day, this same young barista can be spotted jumping up on a Main Street bench, large camera in hand, to quickly photograph an arriving storm front arriving just above the distant part of Main Street. “Unbelievable clouds and thunderstorms here,” says his artist colleague, Steve Adams. “They’re just-formed, over the mountains.” 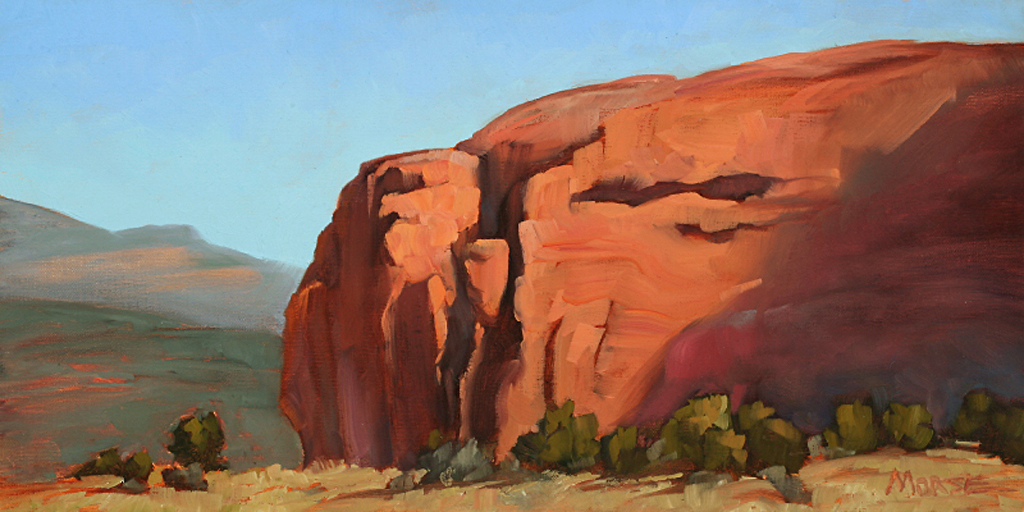 Blue-eyed Tim J. Morse, who wears a brimmed hat as well as Western-star Dennis Weaver did in McCloud, greets you in his gallery as long and narrow as two train cars (Tim J. Morse Studio). Intense Art Deco-blues-and-oranges fill most of Morse’s pantings. In “South of Moab” and “North of Moab” and “The Sinking Ship” Morse is so confident in form he doesn’t need to include clouds, for drama, though in “Sand in the Sky” and “Gossips” and in multiple others he does so, to great effect. Much of Morse’s work, like Adams’, is far-ranging plein air — from the Grand Canyon, Moab, here (Helper), and elsewhere. Shades of dull purple now and then appear, in his Grand Canyon paintings, but they’re earthen, mulled. Morse’s rock formations are like tall Art Deco buildings: they make you look up, an observer. But when clouds are passing by in these paintings you imagine you might even borrow a moment of their cloud-vision, look down to the rocks’ tops, see all the terrain.

Anne Jespersen of Anne Jespersen Fine Arts, almost directly across from the train depot, is both artist and architect, and arts organizer, too. Slender, silver-haired, she works at a desk surrounded by paintings, pottery, sculpture; attending a show, she wears glasses with frames playfully embedded with sparkling crystals, a thin black pair of gloves pressed into the same palm as loop-handle for a leash for her dog Nico, a multi-colored poodle breed, who is with her at her gallery through the day. Though she has a Western background, Jespersen looks, in Helper, as if a cloud floating over the Metropolitan Museum brought her directly here. The Helper Project, an arts-funding project she and her husband Roy Jespersen started, recently resulted in even a complete symphony coming to town, setting up chairs and performing on Helper’s Main Street. (Each “Helper Project” painting’s sale price is split 70/30 between artist and The Helper Project.) 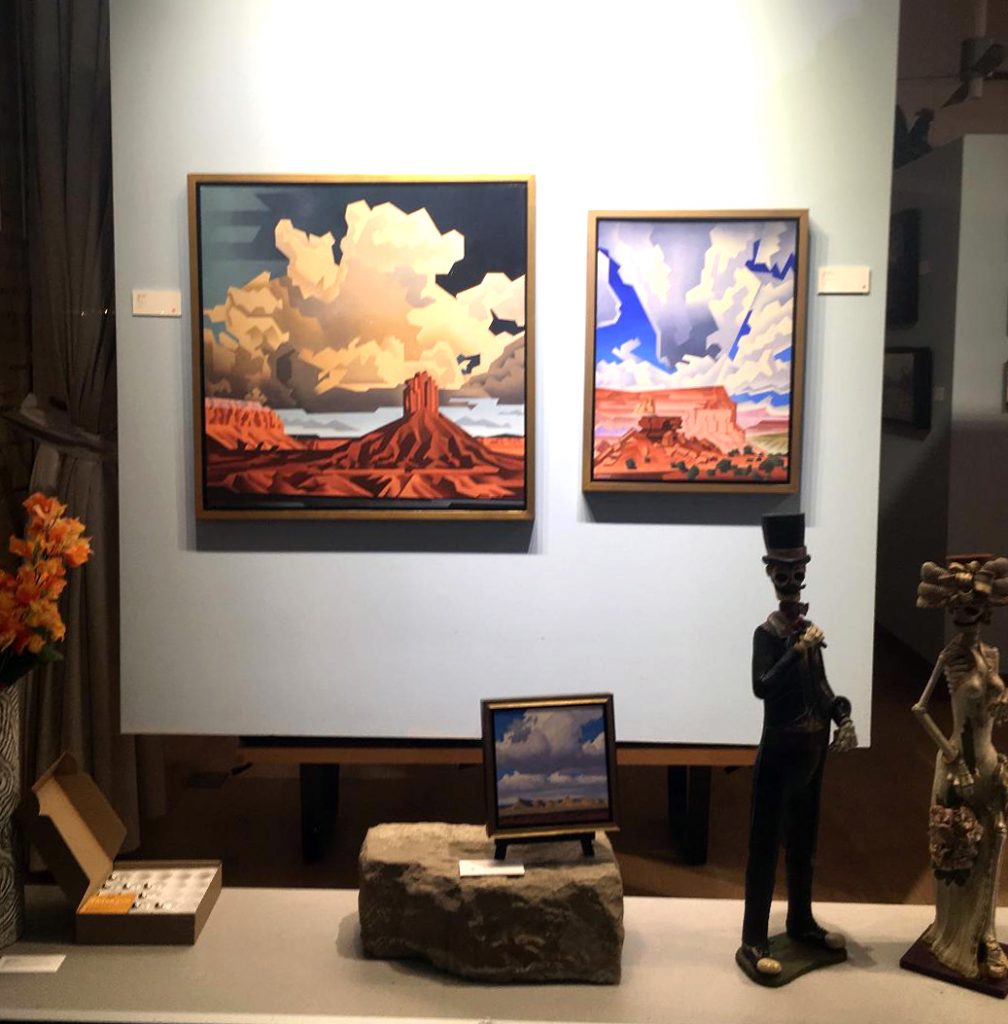 A peek inside the window at Anne Jespersen Fine Arts, with paintings by David Jonason. Photo by Rebecca Pyle. 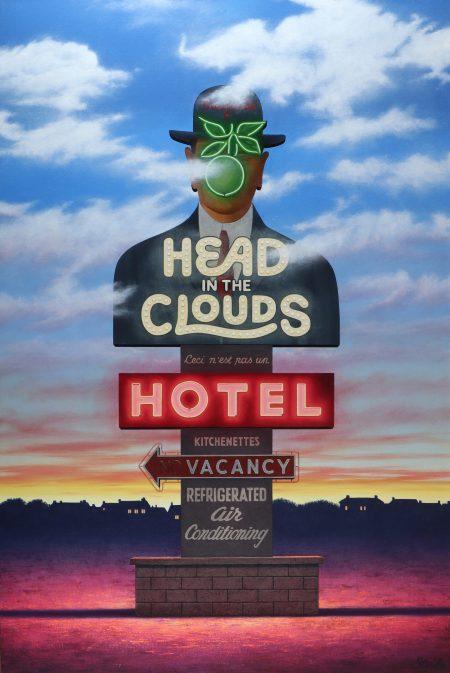 “Head in the Clouds Hotel” by Ben Steele

Jespersen, the town’s Miss Kitty or Mary Poppins, is cloud-mother, too; since mid-August the “Clouds are in the Air” show, curated by Donna J. Poulton, has been up. Among them are Katie Starling’s “Stratocumulus,” clouds only on large square dark blue canvas, four feet by five feet, but not a starling in sight; Ben Steele’s also-large “Head in the Clouds Hotel,” incorporating neon signage; and Californian David Jonason’s “Butte w/Cloud,” with its geometrically squaring-off clouds/land, incorporating almost repeating-dance-designs of Indian basketry or textiles, but with clouds which head off into the sky like cubist popcorn.

The Helper Art Space, a former brothel turned into live/work studio space, features “Autumn Earths,” an exhibit of ten contemporary artists working in rural settings. Work of all types in the gallery were to be found: a set of “rust prints on canvas” pieces, by Grace Whatley, suspended by twine; as well as her moody “Sowing,” larger-than-life pine cone and various inner pits, from fruit, oil on canvas. And more Jason Huntzinger framed black and white photographs were on display, and one mixed-media piece, “Sleeper,” by Christopher Kanyusik— a total of five found pieces of wood, all the same length, four plastered white, and one stained an almost creosote-brown, all placed by him so they climb up the wall like railroad ties, and glow, beneath one spotlight, oracular. 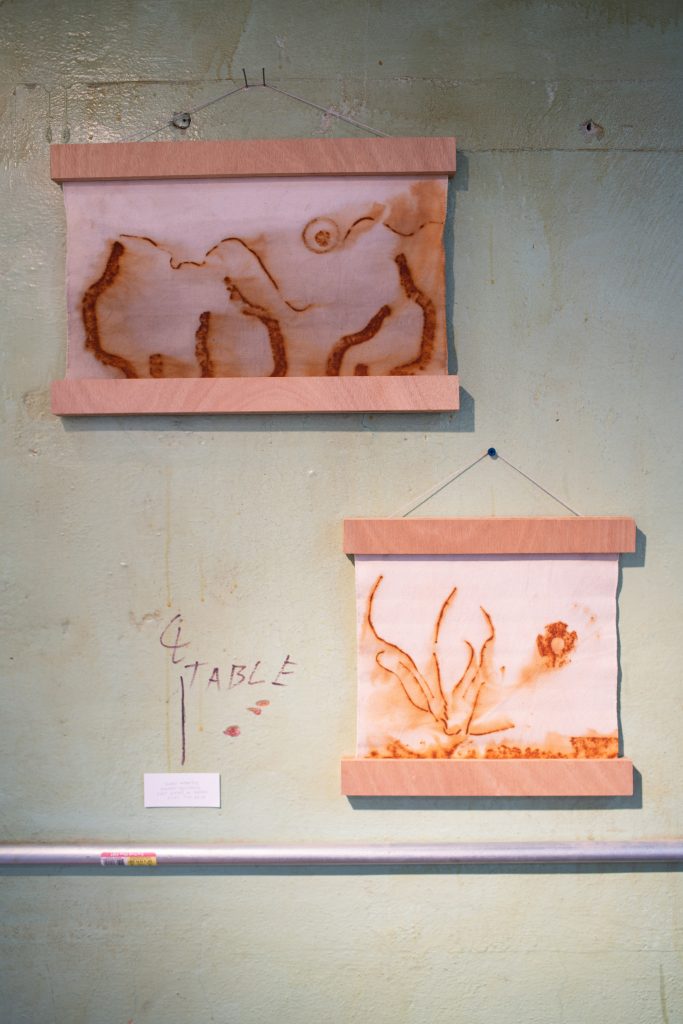 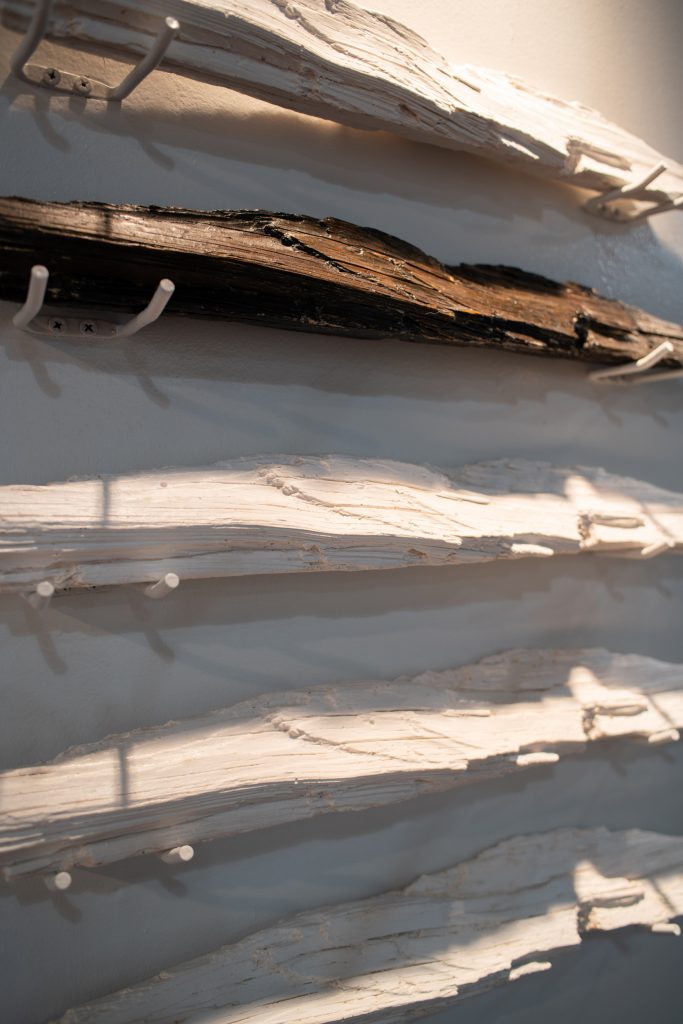 Glimpses of the studios just beyond the “Autumn Earths” show include a row of an artist’s large hollow clay figures, a handcrafted white paper mask, tables and shelves filled with ephemera, even a huddled, largeish, Pinocchio figurine.

At K2, or “Untitled Gallery” (as its curving ironwork sign spells out above its entrance), artist Lisa Chamberlain has laid out on long table all the stages of making a cast bronze sculpture (clay, rubber mold, wax, repeated slurry and sand; then, off to a cast iron foundry). At the end of Chamberlain’s process-laden table, a finished work, “Clear to the Frog.” A standing jacketed bronze frog, over two feet tall, on sculptor’s stand, he has his metal fiddle on his shoulder; his metal bow rests on metal strings: though everything about him looks classical, he’s also, due to materials, now a heavy-metal fiddler. To give his jaunty, out-swinging metal jacket a look of linen, Chamberlain says she at early and formative stages pressed burlap gently to the frog’s still-damp jacket made of clay. That burlap weave-impression survives, rippling and faint, in the new metal.

Above Main Street, more clouds, and sunset too, are rolling now through this town: Helper, named after steam-powered “helper” trains, which, like tugboats, helped trains up steep mountain grades, is now cloud factory, dream factory. 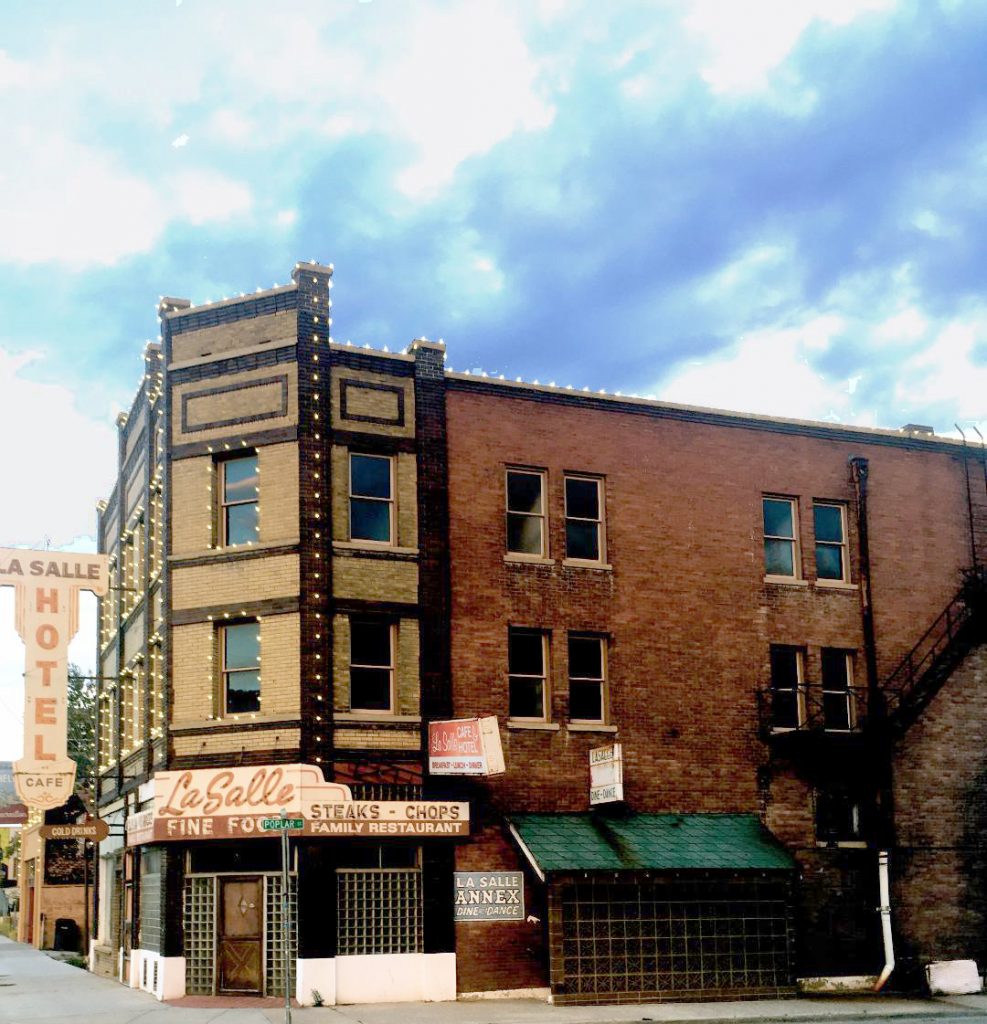 Clouds dance across the afternoon sky above the La Salle Hotel in Helper, Utah in early October, 2021. Photo by Rebecca Pyle.