Herding cats is never easy, and when the Sundance Film Festival comes to town it gets doubly hard. Many of our writers like to spend a good chunk of January at the screenings, which can make it hard to get them to write on the local art scene. Sarah Thompson, who promises us she’ll also be writing this month on the Arrivals/Departures exhibit at Salt Lake’s Rio Gallery, has been catching a number of films this week, posting her reviews of them on Facebook, and sending them our way as well. Ain’t Them Bodies Saints, she says, is a must see, so we’ve included the review here. To read her reviews on other films, including Touchy Feely and Emmanuel and the Truth About Fishes, click here. 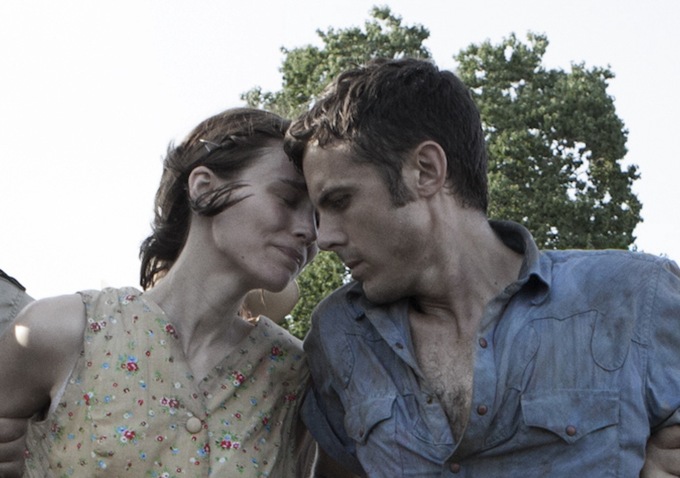 reviewed by Sarah Thompson
After the film, director David Lowery (who was kind enough to do a Q&A in SLC along with some of his cast and crew) was asked by an audience member how he chose the name for his film.  His response was that he wanted to evoke an earlier period of time or the lyrics of an old country song to set the mood for the film.

And while it may be presumptuous to say so, his response doesn’t do justice to the apparently fortuitous genius of the title.  There is simply no other title that could possibly fit this heart-wrenching (in the good sense) gem of a film.  In fact, if you are so inclined, I invite you meditate on that phrase, and sob at the truth and beauty of it.  I did.  Hours later, I’m still crying.

If you read conventional reviews, you’ll see words like “outlaw,” “crime spree,” “romance,” “violence,” “cops,” and “justice.” And yes, those concepts form the bones of the film. And if that’s all you see, you’ll miss the heart and the deep humanity that Lowery and his actors bring to the film.  Because it’s not “Bonnie & Clyde” or “Natural Born Killers.” It’s a story of what it truly means to be human and flawed, to live in an imperfect world; a story of compassion, redemption, doing the right thing no matter the cost, and the opportunity to start anew. It’s a film in which each major character, no matter how flawed, proves him or herself to be a saint – not in some angelic realm, but in the flesh, confusion, hardship and pain of real life.

And if that’s not enough, it’s a brilliantly crafted film. The cinematography is quietly stunning, whether it’s focusing on two lovers walking through a field, shooting in darkness so dense you think you can’t see — and yet you see everything you need to and nothing more — or illuminating a small Texas town in a perfect washed-out sepia unlike anything you’ve seen on hokey western postcards. If I had any complaint at all, it might be a few too many lens flares, a minor thing in such a gorgeous film. The score is predictably country, and yet something more, something moody, poignant and never trite or condescending.

Rooney Mara stars (and shines) as Ruth, the lover of Bob (Affleck), who shoots a deputy during an attempted crime. When Bob takes the fall and is sent to prison, Ruth is left alone and a single mother, dealing with the poverty, hard work and devotion that entails, her love for Bob, and her guilty secret. Her portrayal is perfect, understated and moving. The only false note is her remarkable beauty.  She looks far more like someone who spends her days at expensive spas than an impoverished single mother in a tiny Texas town in the mid-late 20th century. The director would have done well to stick with a much more natural look, evident in the early scenes of the film.

Affleck brings a naturalness and honesty to his character, and there is not a trace of “movie star” in his portrayal of Bob, a troubled and confused young man who nonetheless maintains an unshakeable and determined moral compass when it comes to what really matters.

Keith Carradine turns in an unusually nuanced performance as Skerritt, a man of decidedly mixed moral convictions and motives – and yet also ultimately an embodied saint.  And Ben Foster is quietly affecting in his role as the deputy Ruth shot, who comes to care deeply for her and her daughter.

My only quibble is the final scene which borders entirely unnecessarily on tearjerking.  I would have ended it at the scene before.

Ultimately though, this film transcends both story and character and becomes a meditation on morality, compassion, redemption, the hope and chance of starting anew.  And part of what makes it so heartbreaking is that those very qualities are lost today in our sophisticated and technological society of universal IDs, militarized police, background checks for everyone, DNA testing, and near universal surveillance.  In our search for perfect justice and perfect safety we have lost not only the opportunity for redemption, but the very qualities that make us that unique mix of human and deity, saints in bodies.  We have sold our divinity – and more than anything, that’s what left me sobbing and heartbroken.

To quote Ruth (as imperfectly as I can from memory), I wanted to tell you everything about it, but I couldn’t find the words, so I stopped writing”.  Which says more than my words could ever say.

Visit Sundance’s site for times and venues for Ain’t Them Bodies Saints.

Tagged as: by Sarah Thompson