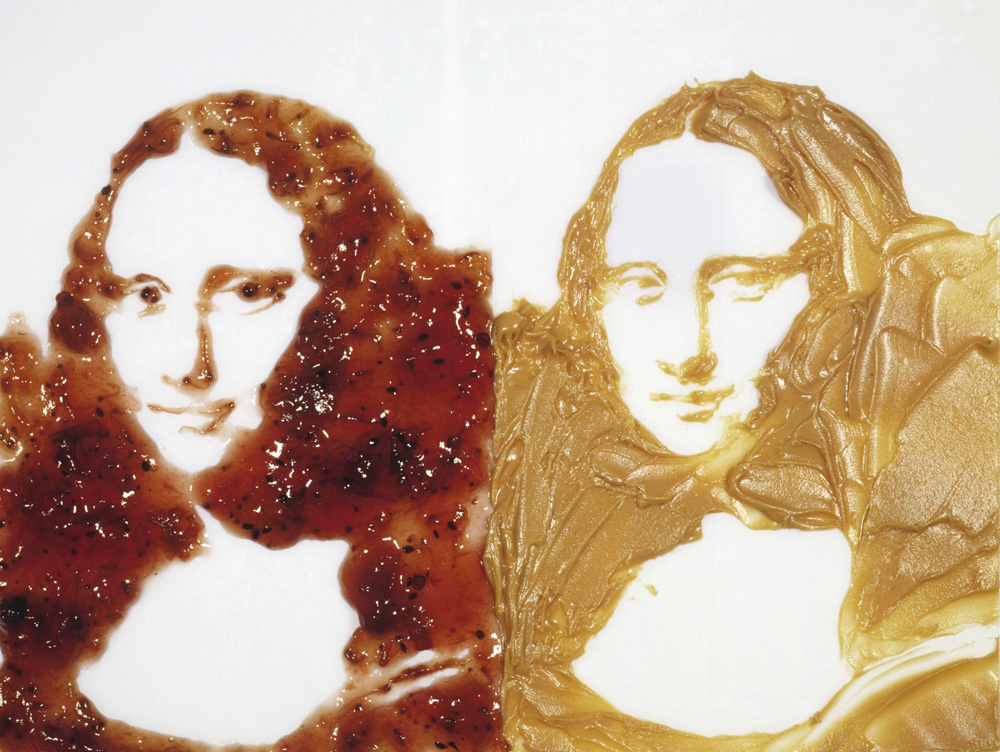 “The medium is the message.”

First coined by the Canadian theorist Marshall McLuhan in 1964, this pithy phrase has dramatically shaped our understanding of postmodern theory, language and aesthetics. For artists like Vik Muniz, however, it is both a creed to uphold and an ideology to subvert.

In his “photographic delusions,” Muniz captures mythical spaghetti mid-scream, commands toy soldiers to be submissive, and, in good taste, makes peanut butter and jelly appear refined. Of course, what a viewer first sees is the shrieking face of Medusa, a somber portrait of a soldier, and a striking double portrait of da Vinci’s “Mona Lisa.” The expectations brought to his works are simultaneously met and thwarted by packaging predictable messages in unpredictable mediums. And it is precisely this paradoxical quality that makes Vik Muniz’s work extra-ordinary. 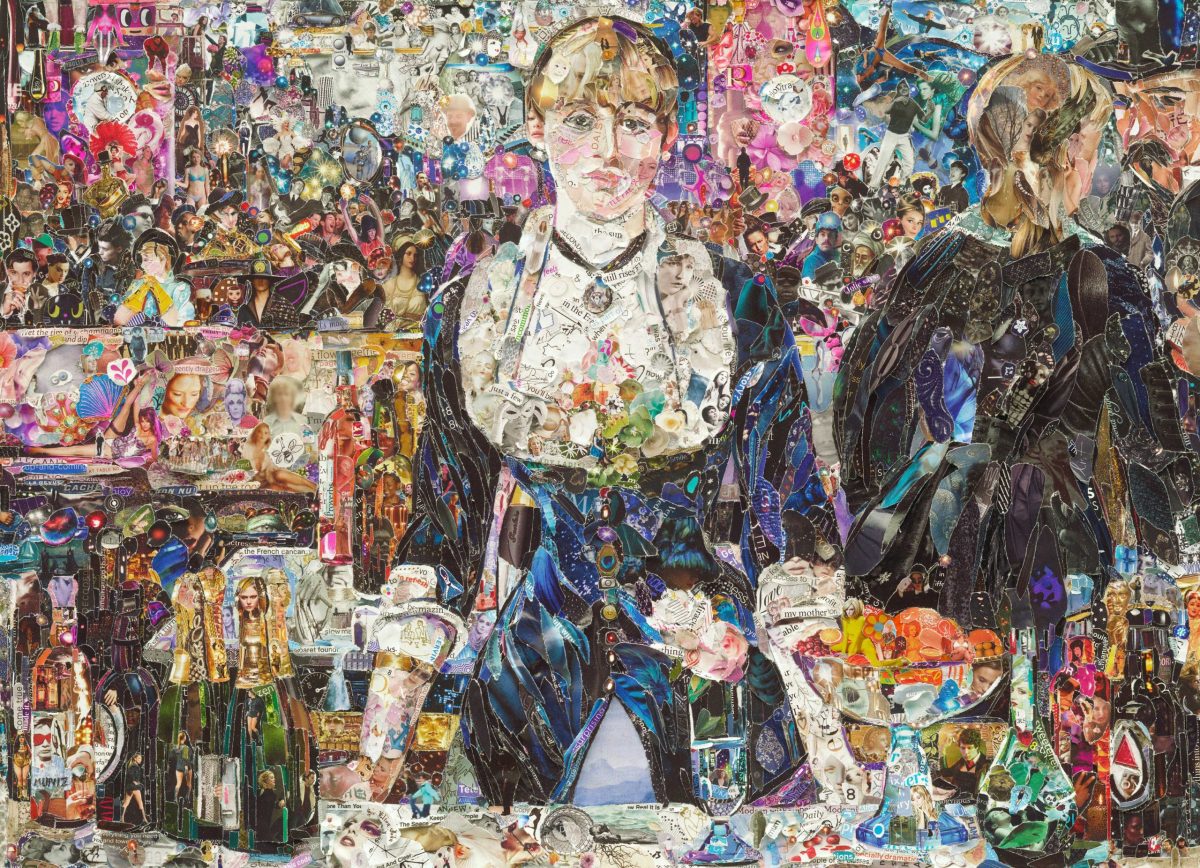 From his Pictures of Magazines series, part of a large exhibit of the artist’s works at the BYU Museum of Art, Muniz has playfully engaged some of the most iconic works in art history: Manet’s “A Bar at the Folies-Bergère” and Courbet’s “The Stonebreakers” each take up supersized portions upon the gallery wall in the final form of a chromogenic print. These famous images, among others, have been recreated in collage form. Muniz uses a palette of vintage print media to construct his stonebreakers, each magazine piece carrying its own connotational baggage into the whole. His print pigments are far from random; most are derived from sources that correspond thematically with the original subject: a mechanic at work, a belt of tools, human forms bent over in labor. What up close appears to be a cacophony of images, from afar creates an impressive copy of the world’s most famous works. 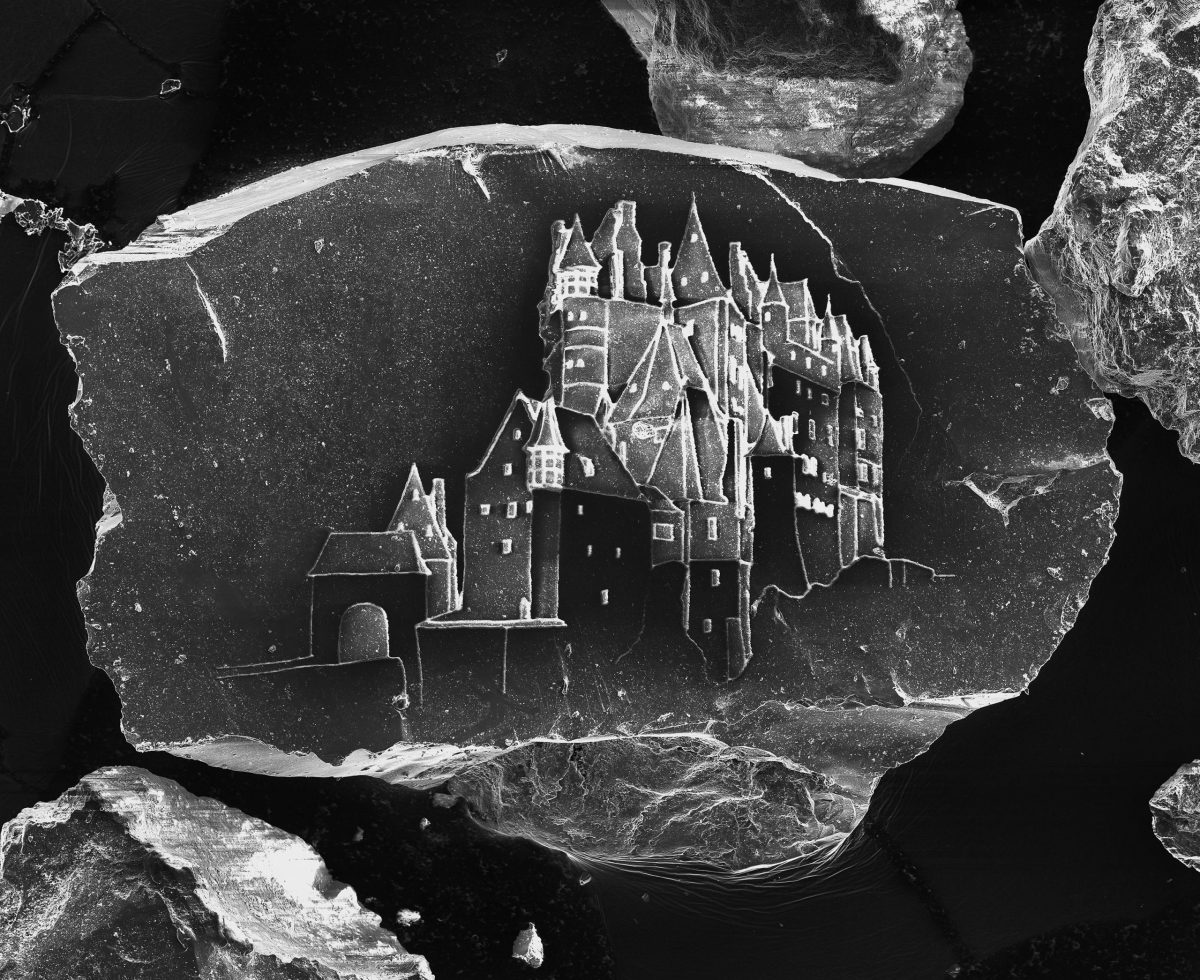 Scale, and our perception of it, is a dominant theme throughout the exhibition. Arguably an important but less obvious element than medium, the scale of each work is entirely unique, arbitrary, and imagined—- neither imitative of the original’s size nor true to Muniz’s own creation. All that is left for us is the skewed photographic documentation that the artist has resized for our viewing pleasure. None of these  pieces are “real” in the sense that we could interact with them as they actually exist — or once existed — in the world. One cannot help but become acutely aware of this fact when looking at a Vik Muniz’ artwork. Whereas works from the Pictures of Magazines, Postcards from Nowhere, and Sandcastles series’ are photographed and blown up, arriving at the museum in a larger-than-life state — in the Sandcastles series, where Muniz has etched castles onto grains of sand, much, much larger— others, like the sites photographed in the Earthworks, Pictures of Junk and Pictures of Garbage series are so grand that they could only be appreciated from a bird’s eye view. In Muniz’s version of David’s “Death of Marat,” from Pictures of Garbage,  a chiaroscuro effect is achieved not by the contrast of light and its cast shadow, but by the juxtaposition of junk and bare soil. Clusters of flip flops, toilet seats, broken umbrellas and unwanted tarps throw the white corpse of Marat into high relief and comment on the state of the poverty-stricken catadores (trash pickers) who assisted the artist in arranging the work onsite in his native Brazil. 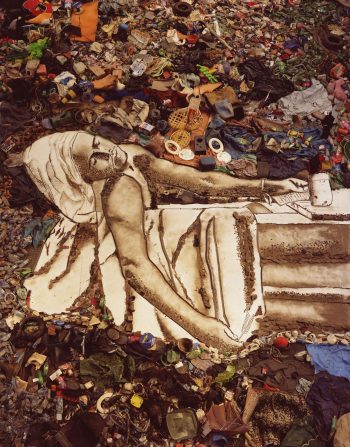 Although completely capable of generating original subject matter, Muniz litters the exhibit with replications of the great artists before him, begging the question, “Why do artists ‘copy’ works?” There is, of course, a history of academic art training that would suggest that visiting a gallery to sketch masterpieces would be a vital step in a student’s understanding of technique and serve as a point of departure when developing their own style. But, on the other end of the spectrum? Forgery?

But Muniz does not seem to be doing either of these things. By reinterpreting art history’s best hits through a variety of unconventional mediums and startling scales, Muniz fathers the next generation in a genealogy of art objects. Be it Warhol, Goya, Caravaggio, Pollock, or Winogrand, each is honored, tested, and given new life through Muniz’s 21st-century reinterpretation. 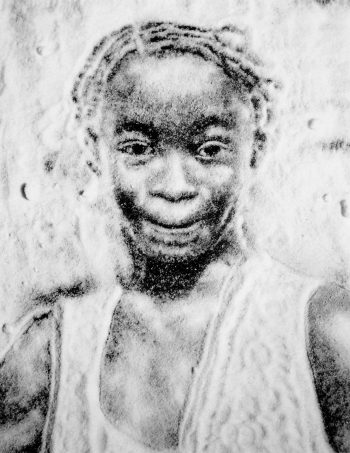 We cannot understand these images by simply taking them at face-value, and yet this is the exercise the artist wishes to engage us in. Pictures of paper, wire, soil, ink, thread, diamonds, chocolate, raw pigment and caviar monsters — “That’s all they are,” he seems to tease. In true Whistleresque fashion, Muniz titles his works after the medium as if it is all he is concerned with seeing. Without discounting the remarkable skill required to conceive, collaborate, and create familiar images in unfamiliar forms, we would be remiss if we thought this was all there was to Muniz’s work. The Sugar Children, a modest series tucked behind the main entrance wall provides a profound example. With his meticulous attention to detail, Muniz uses grains of sugar to create portraits of children on the island of St. Kitts: “Big James Sweats Buckets;” “Valentine, the Fastest;” “Tenten’s Weed Necklace;” “Jacynthe Loves Orange Juice;” “Lil Calist Can’t Swim;” and “Valicia Bathes in Sunday Clothes.” As carefree as their personalized titles and expressions may appear, these children are from families who labor on sugar cane plantations for little pay. By crafting the portraits out of the very substance that both provides and impoverishes them, Muniz reminds us that sometimes “the sweetest things in life can have bitter origins.”

The medium is the message. The message is the medium.