Chacon is one of twenty-four Latin American and Latinx artists featured  in Vida Muerte Justicia/ Life Death Justice, a relevant, impactful, and essential exhibition currently showing at Ogden Contemporary Arts and the Weber State University Shaw Gallery. Curated by Jorge Rojas and Maria del Mar Gonzalez, the exhibition confronts the relationships between life, death and justice through the lens of racial inequality and the struggle for equity in the 21st century. Gonzalez says that, “This exhibition intends to amplify important voices, raise awareness, build community, and inspire action while providing space for reflection, mourning and collective healing.” 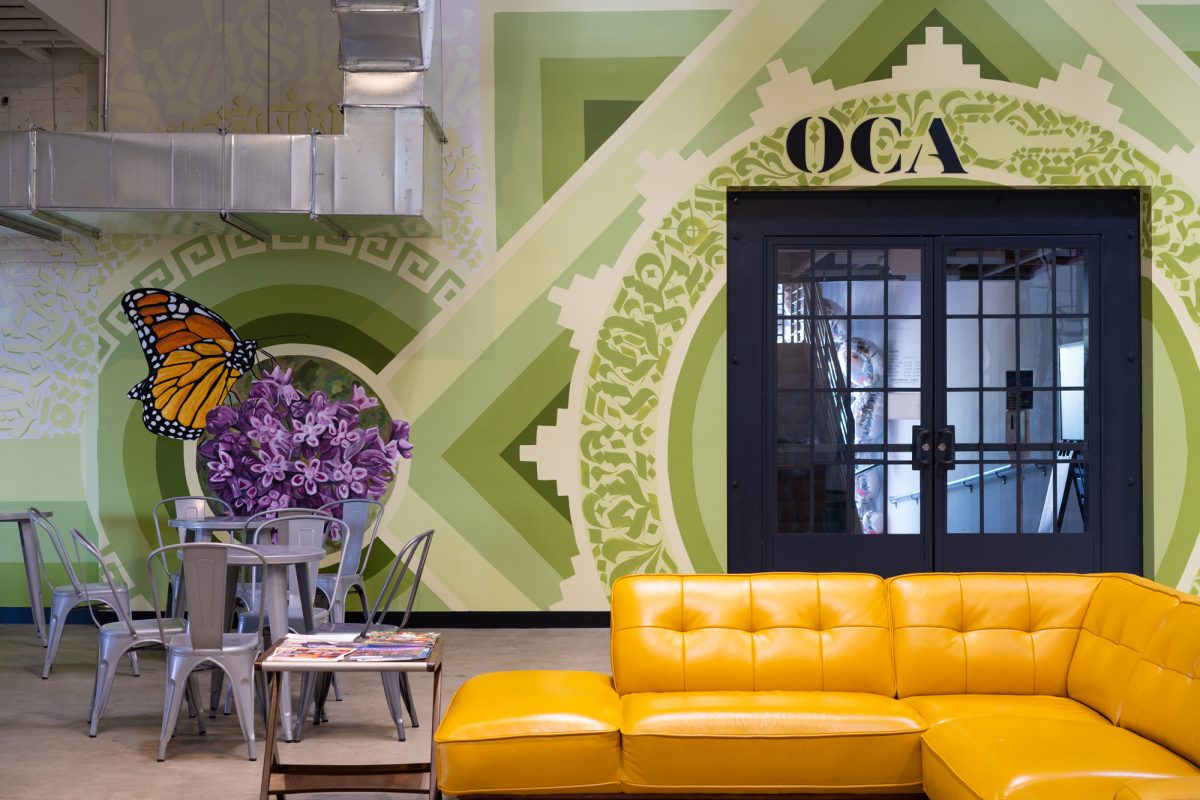 “Amor Eterno,” mural by Roots Art Kollective at the entrance to Ogden Contemporary Arts, from within the Monarch building. Photo by Cam McLeod.

Violence pervades many of these works. Andrew Alba’s “Granary Storage and Ariana,” situates that violence in Salt Lake City. The “Granary Storage” sign that appears in the left of the painting identifies the neighborhood where 22-year-old Bernardo Palacios-Carbajal was killed after being shot at 34 times by police officers in the spring of 2020. The painting also includes a depiction of the artist’s 3-year-old daughter in the foreground. The inclusion of Alba’s daughter reminds the viewer, as does Chacon’s work, that BIPOC mothers and fathers are acutely aware of the threat that racial inequality, within police forces and society as a whole, can have on their children.

Gun violence is also highlighted in Patricia Espinosa’s “America’s Teddy Bear,” a piece that focuses on the lives of both children and adults who have been victims in school shootings from 2012 to August of 2021. Protruding from a glass surface, 632 foam bullets, each representing a victim, form a teddy bear shape, invoking the innocence and youth of those lost in such a horrid way. 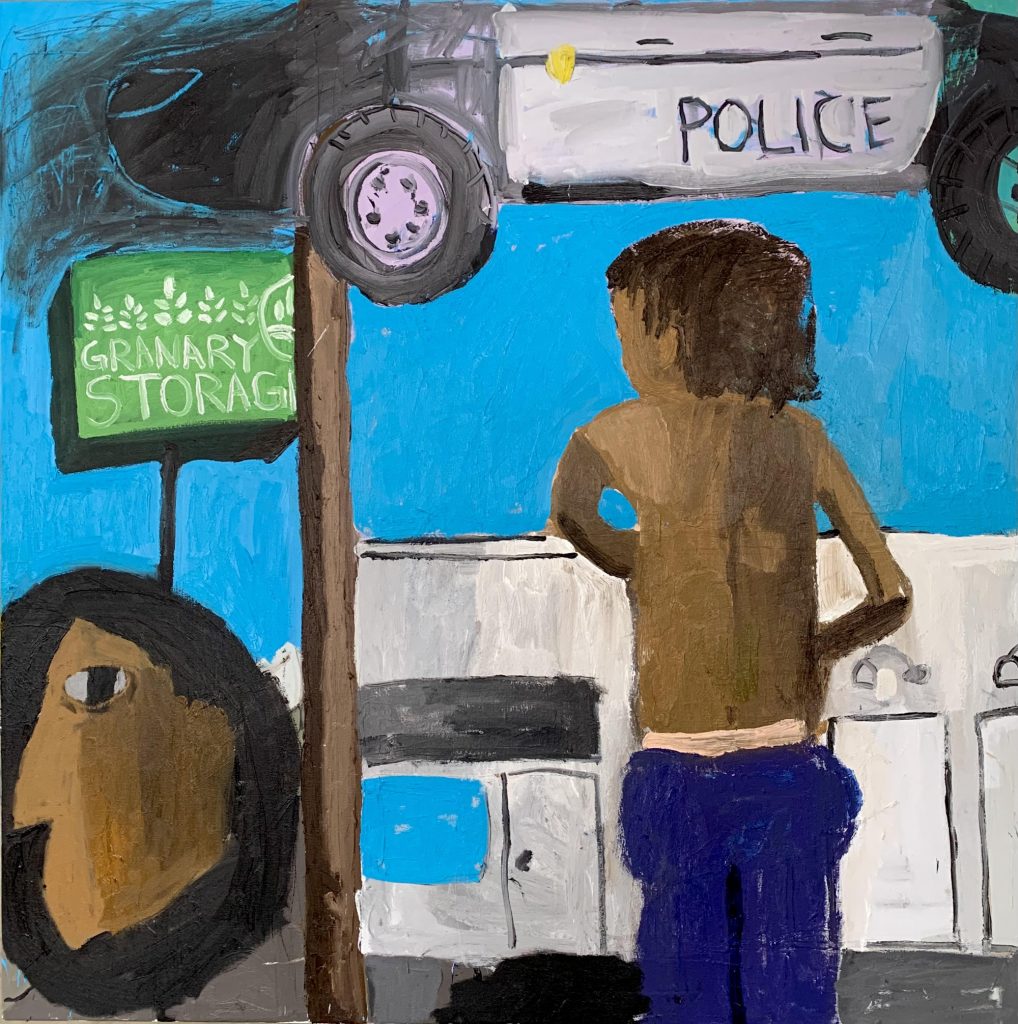 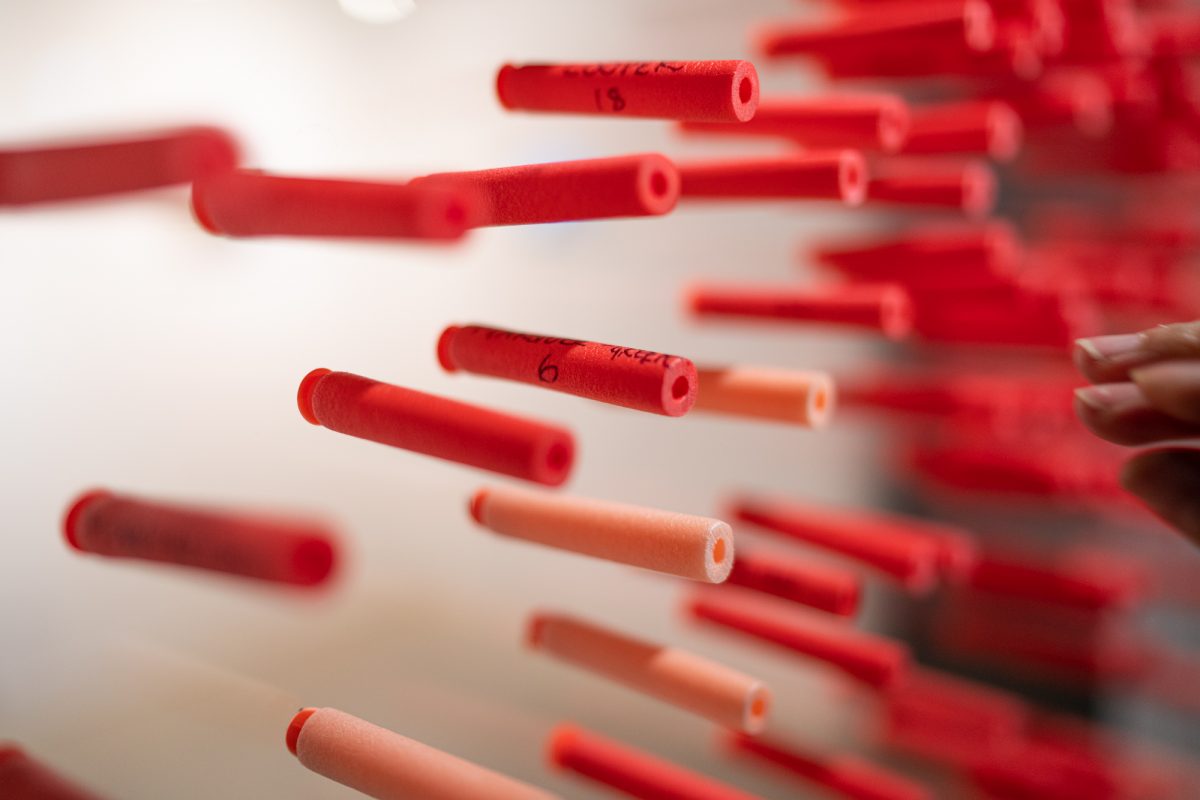 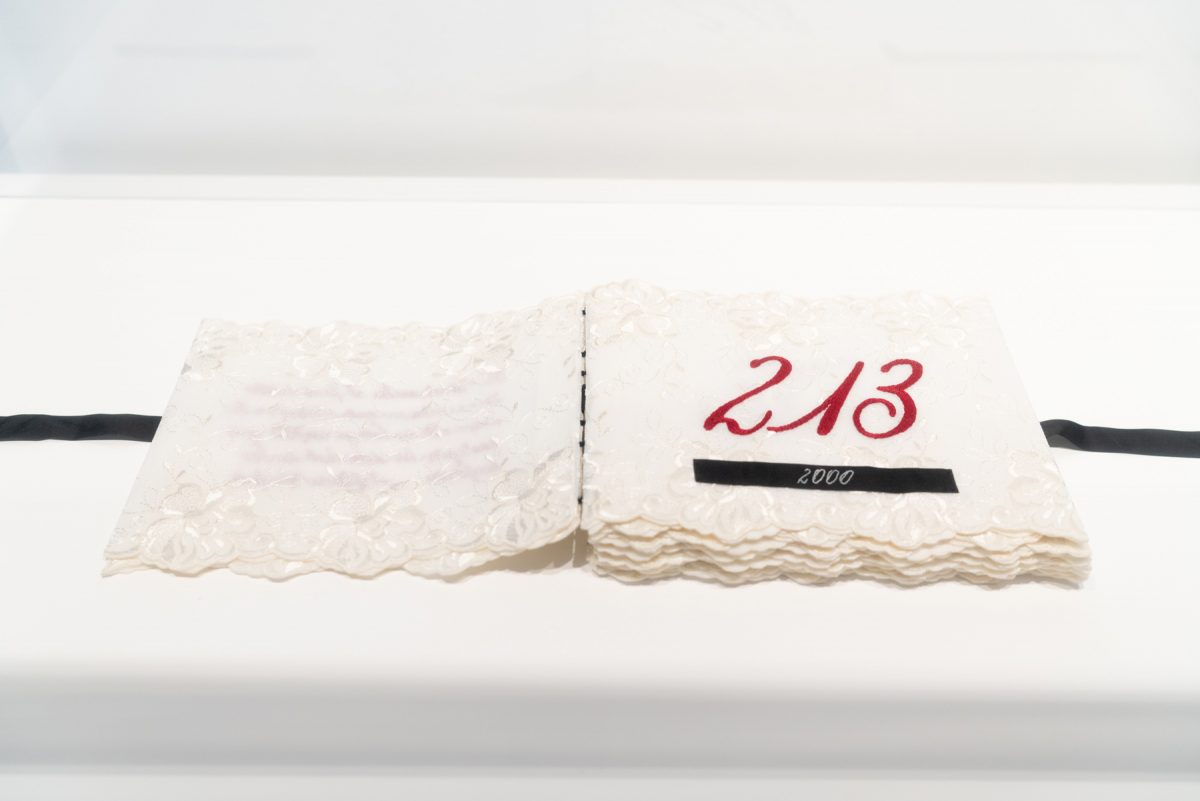 Counting as a method to address violence is also a strategy in Jessica Lagunas’s work, where the artist has hand-embroidered the number of women killed in Guatemala from 2000 to 2010. The numbers are bright red and sewn into a white, lace booklet. This makes the numbers stand out and bring awareness to the shocking number of women who have died for no other reason than existing in the world as women.

In addition to violence, colonization and the erasure of BIPOC cultures and histories are central themes in Vida Muerte Justicia. Esperanza Cortes’ “Emerald Tears” discusses these themes through the use of clay figures of different body parts, such as a skull or heart, that are embedded with beautiful glass beads. This work reflects the oppression and violence that communities (including Cortes’ birthplace, Colombia) have faced  as colonization has led to the pillaging of these countries’ natural resources. The beads shimmer and add beauty to the clay body parts, which fetishize the body and hide the darkness of their origins. 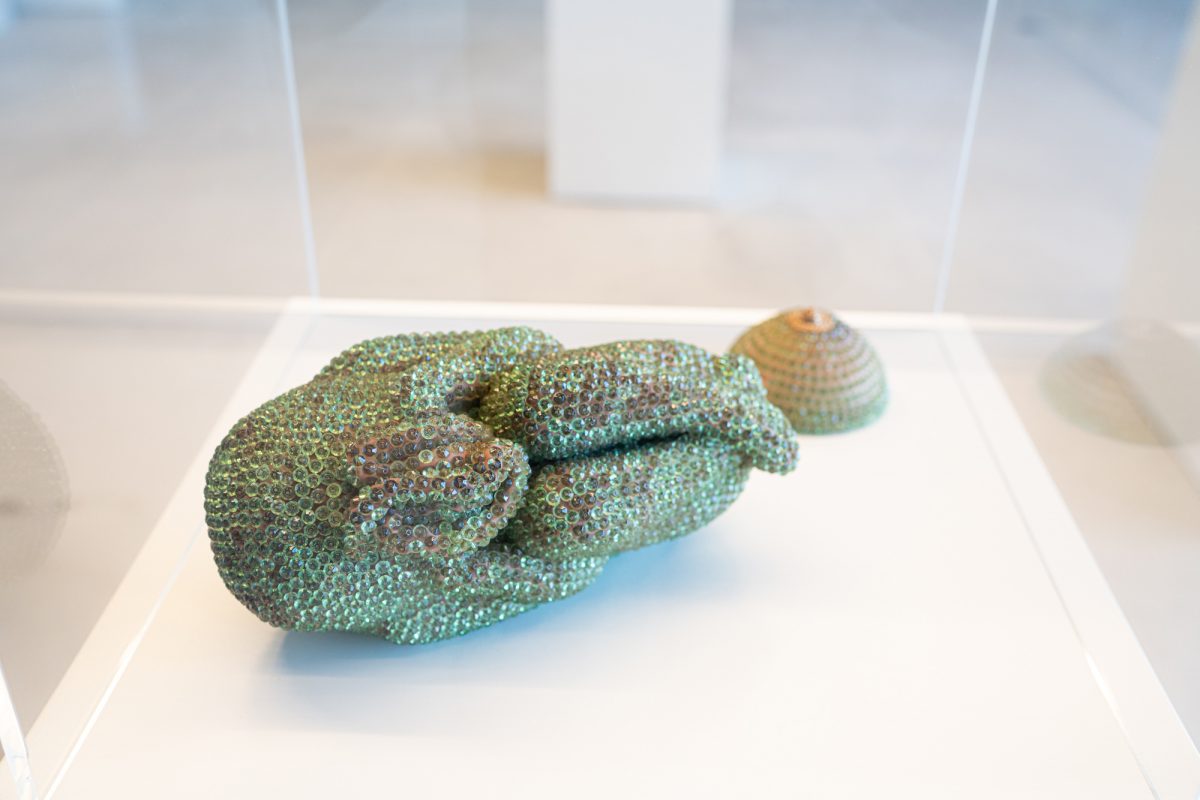 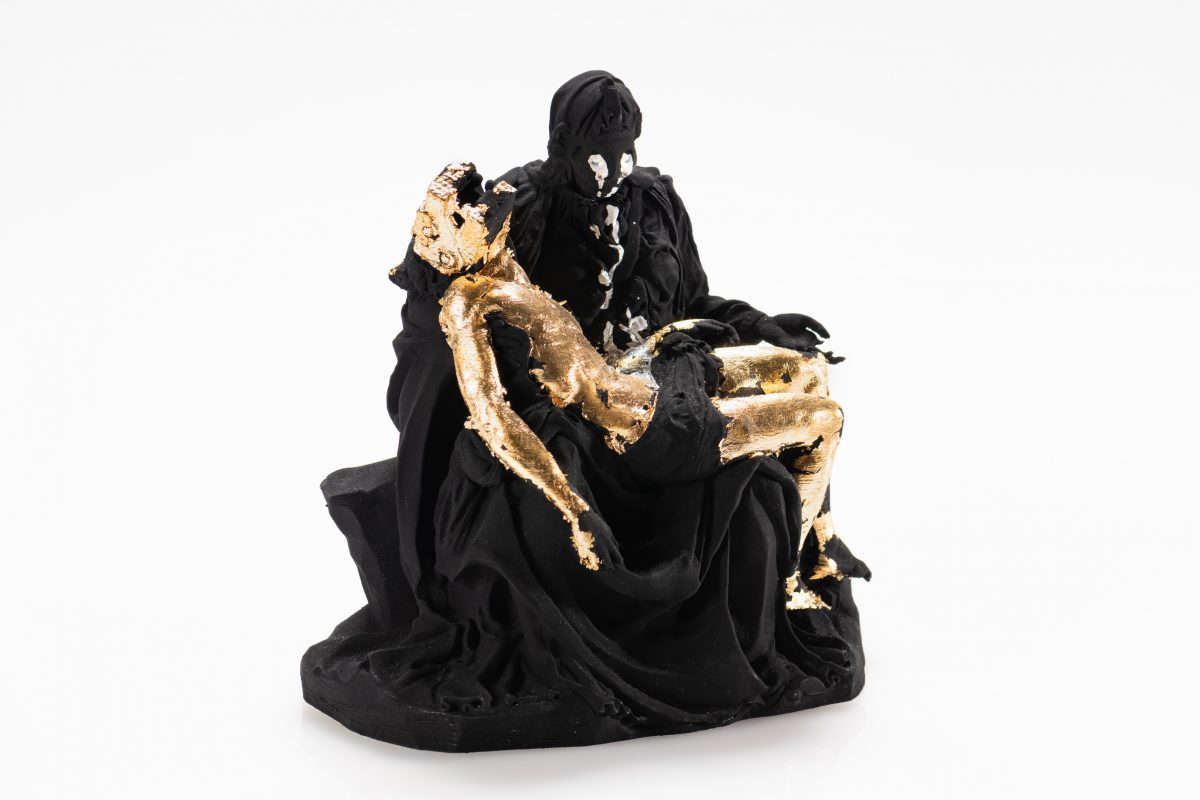 Jaime Trinidad’s “Pieta Mexicana” enacts its own form of erasure while challenging the whitewashing of histories by dominant cultures. Trinidad replaces Michelangelo’s classic white, marble sculpture with a multi-colored one, with striking results. Mary’s form in this pieta is jet black, with silver tears running down her body, while the Christ figure is encased in gold-leaf and bears the head of a jaguar. The choice to use this classic religious representation reminds the viewer of how society has whitewashed Jesus and Mary in classic and modern religious art. With the use of gold, silver and oily black, it also speaks to rapacious colonial desires that masquerade as cultural benevolence. 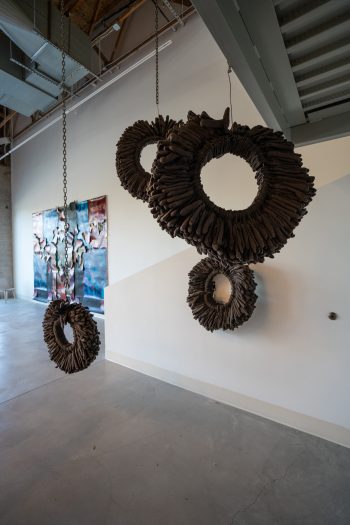 Artists Lina Puerta and Michael Pribich both address how laborers and farm workers are often forgotten in our hyper-consumerist society — another form of erasure. Pribich’s work consists of four steel circles, one mounted on the wall and the other three hanging from steel chains. From a distance, they almost look like wreaths but as one draws nearer, it becomes apparent they are encrusted with brown work gloves, a form of visual synecdoche for the laborers who sustain our economies and communities. In Puerta’s work, a worker’s face is obscured, peaking through bright orange plant life. Puerta has also incorporated lace and netting from food packaging to further emphasize how the men and women behind the food we eat are obscured and hidden behind brands and companies.

Vida Muerte Justicia/ Life Death Justice is a protest against this sort of erasure, and against the violence that pervades our society. It becomes clear that the relationship between life, death, and justice are deeply intertwined throughout these works. Works that address police brutality, gun violence, and femicide confront death while simultaneously making calls for justice. Works about immigration, racist policies, and colonization/the effects of colonization highlight the fight for equity in life, which in turn means getting justice in an unjust system and society.

This exhibition is paramount. It highlights discussions that must be had if we are ever to reach a world of equity. It reminds all who attend that human rights are not political nor are they negotiable. For change to occur all must listen to the experiences and thoughts of marginalized groups and this exhibition is an opportunity for this active listening. The artists and their works are poignant and powerful. If one is willing to listen the works in this exhibition will speak truths. 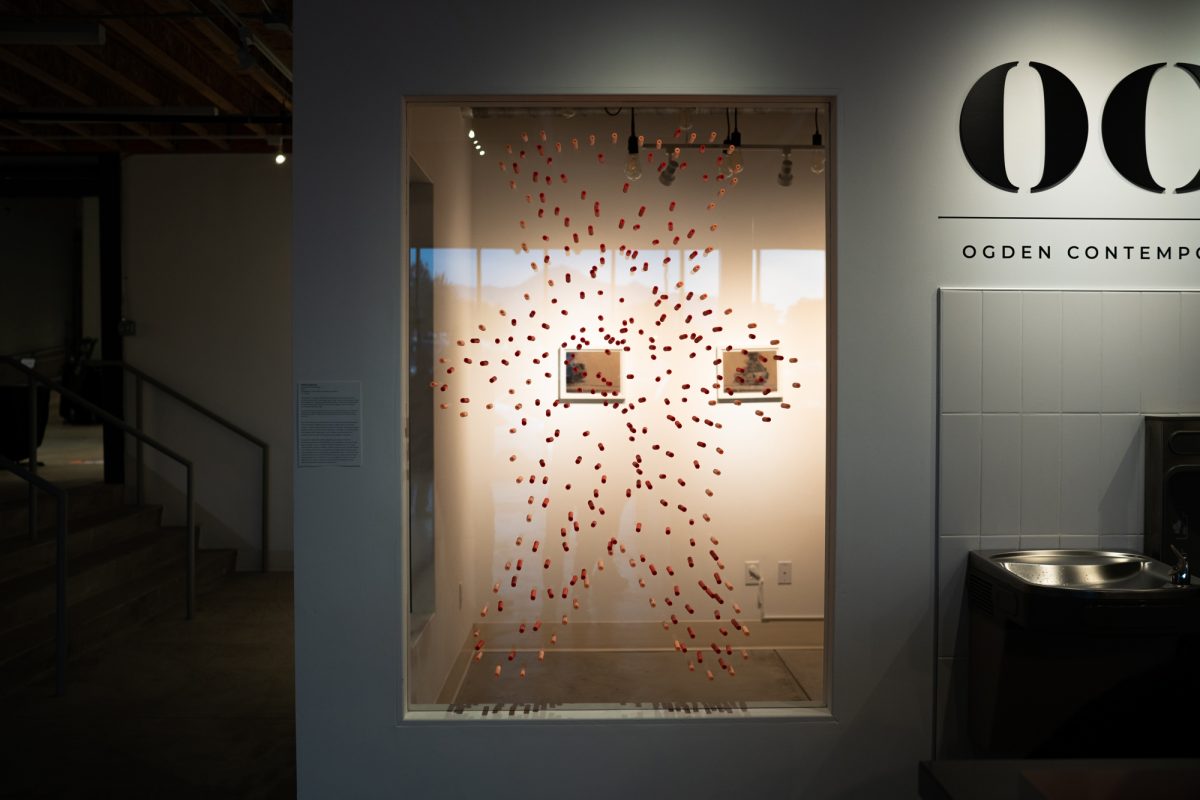 Vida, Muerte, Justicia | Life, Death, Justice, Ogden Contemporary Arts, Ogden, through Nov. 27. Additional works by Guillermo Galindo and Tania Candiani’s are featured in the Shaw Gallery Project Space in the Kimball Visual Arts Building at Weber State University. Events and additional programming are scheduled throughout the run of the exhibition.