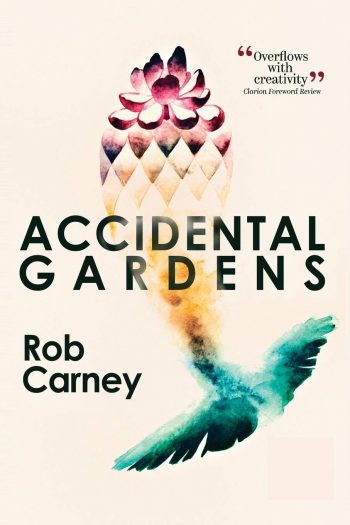 In addition to chapbooks and incidental publications, poet and Utah Valley University professor Rob Carney has published three volumes of poetry. His fourth and latest book, however, comprises 42 innovative prose chronicles, each suitable for dipping into to nourish and kick-start the imagination. Because the form of expository prose Carney chose to build this book on often incorporates verse, it may take a while for a reader to fully grasp that these are, in fact, primarily narratives rather than prose poems. In fact, they belong to a venerable Japanese tradition known as haibun. These were originally personal stories, each of which ended in a haiku: a succinct poem containing an image that sums up the preceding thoughts. Carney is as likely to insert a poem mid-way, or omit it altogether, but overall he strives to find ways to bring a haibun-like conclusion to each memoir.

Consider an example. “In the Beginning Was a River” recollects a decision by New Zealand’s House of Representatives to grant full human rights to a river in their jurisdiction. After briefly marveling at a government that could take such a visionary action, Carney suggests some other improbable recipients of such recognition: stars, bodies of water, mountains. Then he prompts readers to think of their own lists: “Isn’t there a long distance drive you’ve taken with a good enough reason at the end of it?” Then comes the coda:

Anyway, it’s April, soon to be summer in Utah, where most aren’t yelling and opposed to helping refugees. Most don’t think it’s okay to zero them out, leave them trapped in their national horrors.

In New Zealand, they’ve granted more rights than that to a river, which ought to be an elemental lesson.

Let’s hope it flows all the way from there to D.C.

It’s not a haiku, not a tight arrangement of 17 syllables. But it does make the image of a river flowing, developed at the beginning, and make it a metaphor for humane and democratic action: for government of, for, and by the people.

Carney is first and foremost a poet, and even in a collection of prose works he regards his work according to the standards of poetry, as so many of the best writers do. Poetry is like the DNA of language: the place where speech, and so writing, get the aesthetic elements they build into every other literate form. But that said:

Poets don’t get an audience, at least not usually. Still, we never stop trying …

It would be helpful to know what someone’s noticing, that poems don’t drop like pebbles down a well and disappear. Maybe they ripple a bit, maybe echo and change the taste of the water, make the moss on the nearby stones a little greener; that would be nice. I’d like to add that to my résumé: Greener-Up of Living Things, Echo Riding on the Water.

Carney is the poetic equivalent of a contemporary artist: a poet writing in the present moment, and in places he shares some of his thinking about today’s technical issues. Reading this prose can serve as a relatively painless introduction to some of the ways different poems work — kind of like knowing the difference between oil painting and watercolor. It can also be skipped without missing out on the poet’s observations on nature, but there is no point in pretending that thoughts about poetry are not a vital part of Accidental Gardens. It’s worth noting as well that Carney’s views aren’t sentimental, either on poetry or on nature. Neither is the stuff of greeting cards or late-night TV meditations. Carney shares with the original Romantics an awareness of sublime nature, red in tooth and claw, and admits to having watched some of his subjects hunt each other. And he writes about what he sees. In “Commonplace Beasts and Where to Find Them,” he lists the locations where he encounters alien creatures — he’s wants us to remember that all non-humans, even our pets, are separate entities with their own habitats and their own ways of filling their niches — which include his front yard, his living room floor, the local ballpark, tonight and tomorrow, and the TV news. About that one, he says this: “Even without the sound on, you can tell the politicos are lying. Impossible to look that smug without lying first to themselves.”

Carney is angry about the way society takes nature for granted, which has led to global warming, an increase in violent weather, and sharp declines in plant and animal populations. No one should start his book who can’t abide some bad news or righteous indignation about it. From time to time, readers may feel indicted by some of the accusations he levels.

As Stormbird Press, an Australian publisher with a focus on ecology, was about to release Accidental Gardens, much of eastern Australia was devastated by massive wildfires that destroyed millions of acres of forest and killed perhaps a billion wild animals, including kangaroos and koala bears, the horrific deaths of which humans find particularly distressing . A minor footnote was the destruction of Stormbird Press, along with the town where it was located. The alliance between the author and the publisher, if not inevitable, was certainly predictable; both are devoted to the celebration of Nature and the struggle to preserve what is left of the natural world. The fires, while also not inevitable, were equally predictable: part of a future that increasingly features a sixth great extinction. So delayed, but not prevented, what turns out to be a uniquely structured book expressing a unique and distinctive personality, one characterized by a complex combination of lust for life’s pleasures and anger about the way things are going, has eventually arrived.