This profile appeared in the Artists of Utah publication Utah’s 15: The State’s Most Influential Artists (Vol. II). 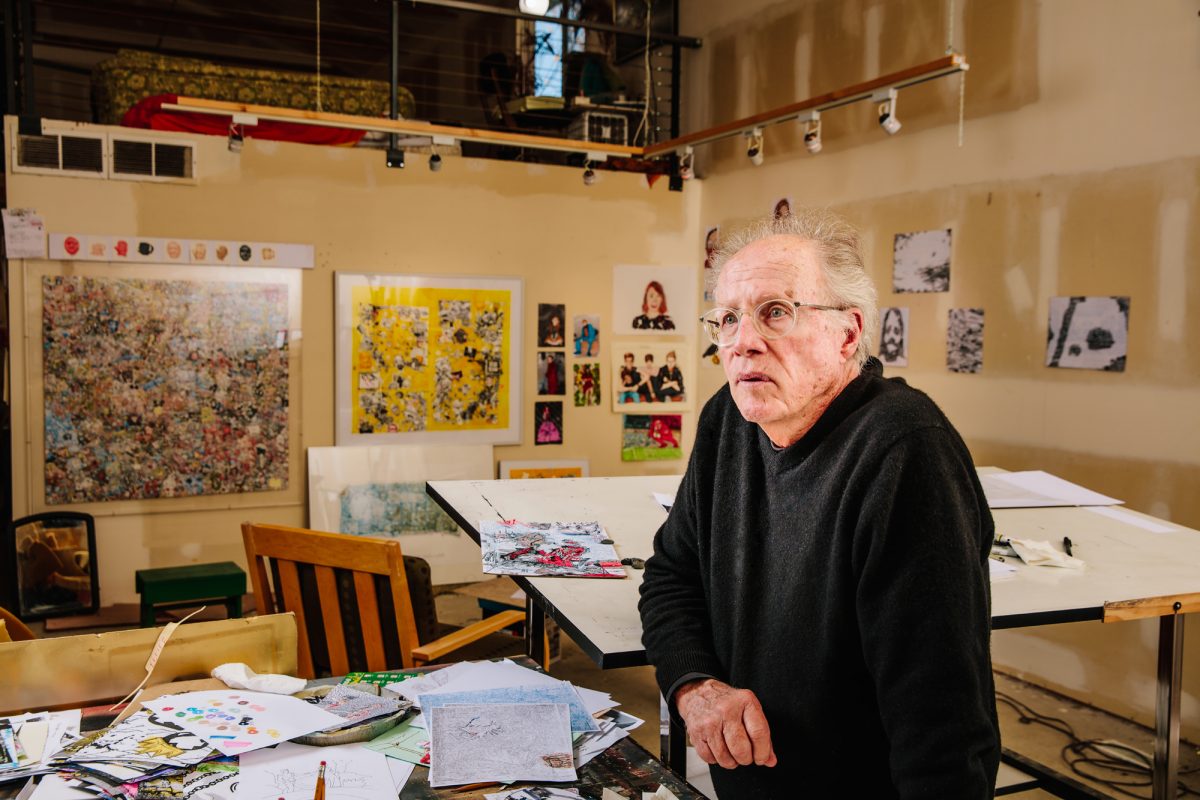 In 2001, after retiring as a professor of art at the University of Utah, Frank Anthony (Tony) Smith also retired from painting — and the art market.

During his 40-year career as an art teacher at the University of Utah and other universities and workshops, Smith succeeded as a dual-career player in the local and national art markets. He is best known for his innovative, illusionist nod to trompe l’oeil through his groundbreaking use of stenciling, cutting, taping, and airbrushing. “He’s fooling you, folks,” wrote Susan Mendelsohn in an undated essay. “These paintings are fancy bags of cheap tricks. They are trap doors and fake bottoms, things up his sleeve and wires and mirrors … It is an invisible experience in the imagination, which shows us how the world looks through Tony Smith’s eyes. Because of his pictures, we can ride piggyback into his encounter with reality. It’s a very remarkable ride.”

Collectors, gallery goers, and students admire these paintings. Critic Jane Connell called them works in motion. “They are thought-provoking in countenance and effect, abundant in visual and psychological intrigue,” she wrote in an article for Weber Studies. “Smith’s subjects take an adventurous course, the two-dimensional surfaces imbued with magic, possibility, and surprise.”

An example of the complexity and dimensional trickery his acrylic paintings evoke is his 1977 “Casa de las Culebras (House of Snakes),” purchased by the Smithsonian American Art Museum and described in the August 20, 1979, issue of Newsweek, as “jam-packed” and “super-realistic.” Many examples of these illusionistic works are found in Utah art museum collections. Smith’s work is also included in private collections across the country, purchased from a variety of respected galleries, evidence of his talent, skill, and commercial success.

Poet Anselm Hollo, in a catalog essay for Smith’s 1988 solo exhibition at Utah Museum of Fine Arts, wrote that his work reveals “humanity as layers of entropic elements, rearranged by the mind’s eye in ways that suggest a grand plan of deconstruction.” In a recent studio discussion, Smith talked about the multi-layering techniques found in much of his paintings and drawings — “images atop images, tightly juxtaposed one to another. My illusionistic paintings are like dreams, just dreams. That’s why lawyers have vacation calendars on their walls with pictures of exotic, faraway places — dreaming about another, get-away life. I hear those paintings are still a big influence with tattoo artists, the best artists today.”

Smith’s fierce imagination, quick wit, craftsmanship, and disciplined work ethic haven’t diminished since professorial days, but are now evident on his drawing table instead of his easel — more retread than retire. Instead of brushes, paints, and air compressors, he now prefers simple colored markers. “I rode airbrush painting for quite a while, until I became tired of its mechanics — all that taping and masking. That’s behind me, and many more drawings are ahead.” Although his drawings could find a commercial market, “not interested,” he says; and he hasn’t been for almost two decades. 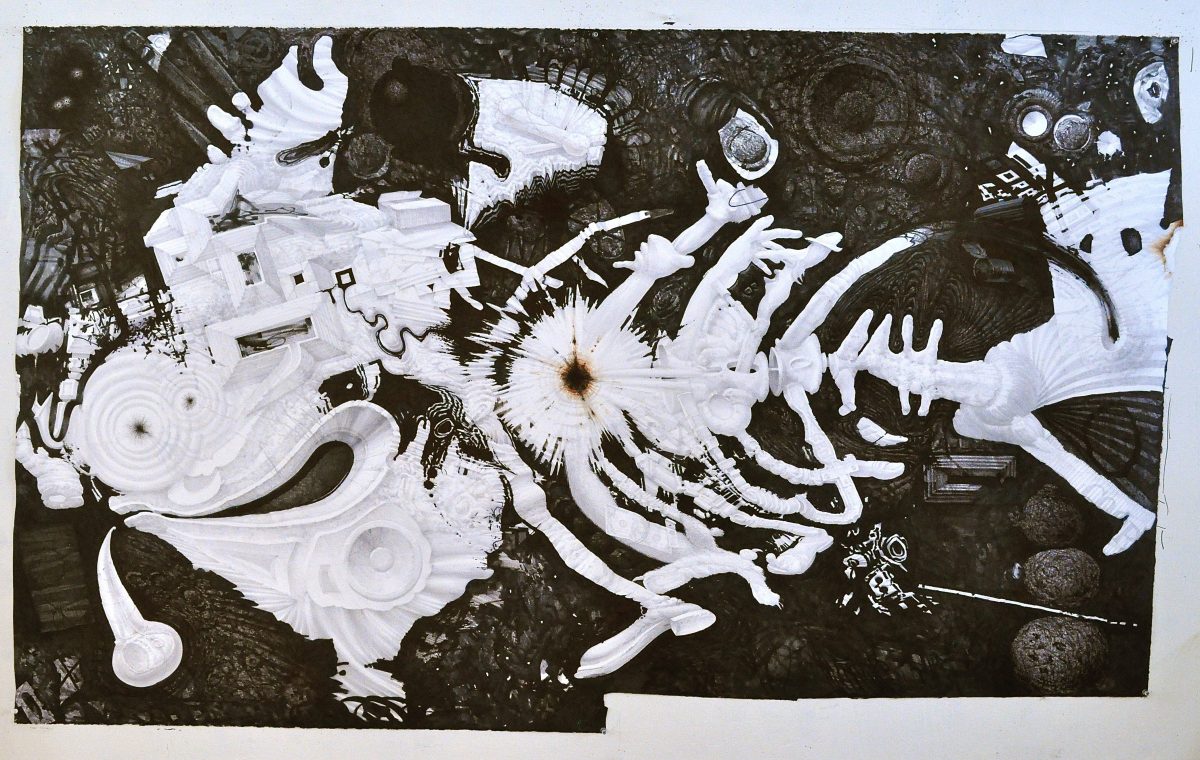 Once Smith became untethered from teaching, painting, and commerce, he plunged into drawing, rechanneling his vitality, spontaneity, and originality. “As an artist, I felt responsible to be significant, like Bruce Nauman’s spiral neon edict that says, ‘The True Artist Helps the World by Revealing Mystic Truths.’” Smith says he “carried deep emotions and a responsibility as a painter and professor to do that.” “Now,” he continues, “I don’t have to bail out the art world or throw myself down the stairs all the time like my former student and teaching assistant, the now-famous Paul McCarthy. He thrives on putting himself in difficult situations as a big-time risk taker. I’m a small-time risk taker. Paul throws the carrot way out there and runs after it. I don’t. He commits felonies and I, misdemeanors. He derives satisfaction from creating big installations. I find my juice while drawing.”

David Kranes, playwright and literary provocateur, recommended Smith for the 2014 Salt Lake City Mayor’s Visual Arts Awards noting that, “Tony’s art was always a great adventure. He would master one approach, then take on the next challenge. Art was a magic trick. Art was beautiful. And, more recently, Art is funny.” Smith’s visual stories morph from confident draftsmanship into droll puns and funny faces and occasional political commentary; some measured in inches, others in yards, some dark gray and off-white, others in muted colors and smudged gradations. His range is from bold, black-marker-filled negative spaces to finely monochrome-hued crosshatched figuration.

Smith reads widely, has a phenomenal memory, and is a critical analyst producing a phantasmagoric culch pile for producing irreverent, satirical, and witty works, interlaced with serious social commentary in which nothing is sacred. Paul Larsen, associate professor in the U of U’s film and media arts department and friend, described Smith as seeing “things from an angle that most of us miss, one revealing something fundamental about the state of things.”

Smith’s quick hand is an unhesitant extension of his thinking. His drawings of life’s conundrums reflect complexity, humor, and mundaneness. He incorporates life’s experiences and the sensibilities of a war correspondent, Army medic, illusionist, grump, humorist, graphic novelist, Star Wars concept illustrator, book author, editorial cartoonist, and more. He’s like Robert “R.” Crumb, bookended by Lenny Bruce on the left and George Carlin on the other left.

And what about Tony Smith, the educator — one of Utah’s great multigenerational influencers, who will be 80 years old in 2019. He’s taught thousands of students over the years, stating he “worked hard and was reasonably responsible” as an educator. If he had a do-over, he says he wouldn’t have criticized his students’ work so severely. A friend, Nick Gosdis, who knew Smith during his professorial tenure says, “You didn’t know him back then, but he’s a milder Tony Smith today.”

A lot of Smith’s changed disposition is due to his home support team — his wife, Monica, a short-story writer, painter, and real-estate tycoon; and his two sons, Evan, a painter and art department chair at Salt Lake City’s West High School; and Willie, who has Down syndrome and is Smith’s constant companion. Perhaps Willie’s good humor is why Smith, a lapsed Catholic, has mellowed. “Getting Willie to the studio, or to the gym, is like walking the 14 Stations of the Cross. Each step along the way is a slow meditation.” Slowing down, gaining patience, and opening one’s heart tends to soften a person.

Another of Smith’s former students, Brad Slaugh, painter and owner of Poor Yorick Studios, says he “influenced generations of young artists, me included, who looked to him as a role model of what it means to be a contemporary artist, as well as learning a whole bunch of artistic techniques, concepts and ideas from him.” Slaugh notes that Smith influenced “many young artists to push beyond their expectations of what was possible for a young creative person in Utah.” He says that a visit to Smith’s studio is “the most energizing art experience I have in this valley, because he is in there every day doing work that is hilarious, thoughtful and astonishing. There is no stopping him from creating his completely original work, and I want all of them. Real bad.”

Slaugh is only one student, but his recognition of Smith’s influence echoes many others who are well along in their own lives whether in or out of the art world. Former student and artist Mark Knudsen says Smith’s “classes were dynamic, articulate, and of the highest creative effort. Tony introduced me to much of the technique that I rely on still. But he did more than that: “Tony taught me the intangibles of art and how to see … and taught the importance of visual discrimination.”

Smith’s classroom demands to “push beyond his students’ expectations of what was possible” imprinted them. Their memories of his insistence on observation and to “push the borders” still solicit quips. In a 15 Bytes comment, artist Laura Boardman said Smith was “one great teacher,” but, she opined he could also be a “Smart Ass … He is a legend at the University of Utah Art Department. I love the art he has left in his trail of destruction, painting, drawing, airbrush and his hand-built home in Torrey.” Tony Smith’s influence on Utah’s artists is as multilayered and complex
as his own work.

The Menil Collection in Houston recently opened the Menil Drawing Institute, the fifth building on its tree-lined 30-acre campus, a $40 million structure. It is dedicated to the study, conservation, exhibition, acquisition, and storage of drawings, especially modern and contemporary work. This effort demonstrates the importance of drawing today, and from this perspective, Smith isn’t an outlier. Local arts writer Geoff Wichert states that “the important arts since 1900 focus on drawing, only now coming into full recognition as a stand-alone art. Central to this is the cartoon or comic, which alone among recent arts has created a new visual vocabulary … in all this, Tony Smith is clearly the new Pope (receiving the title vacated by Andre Breton).” 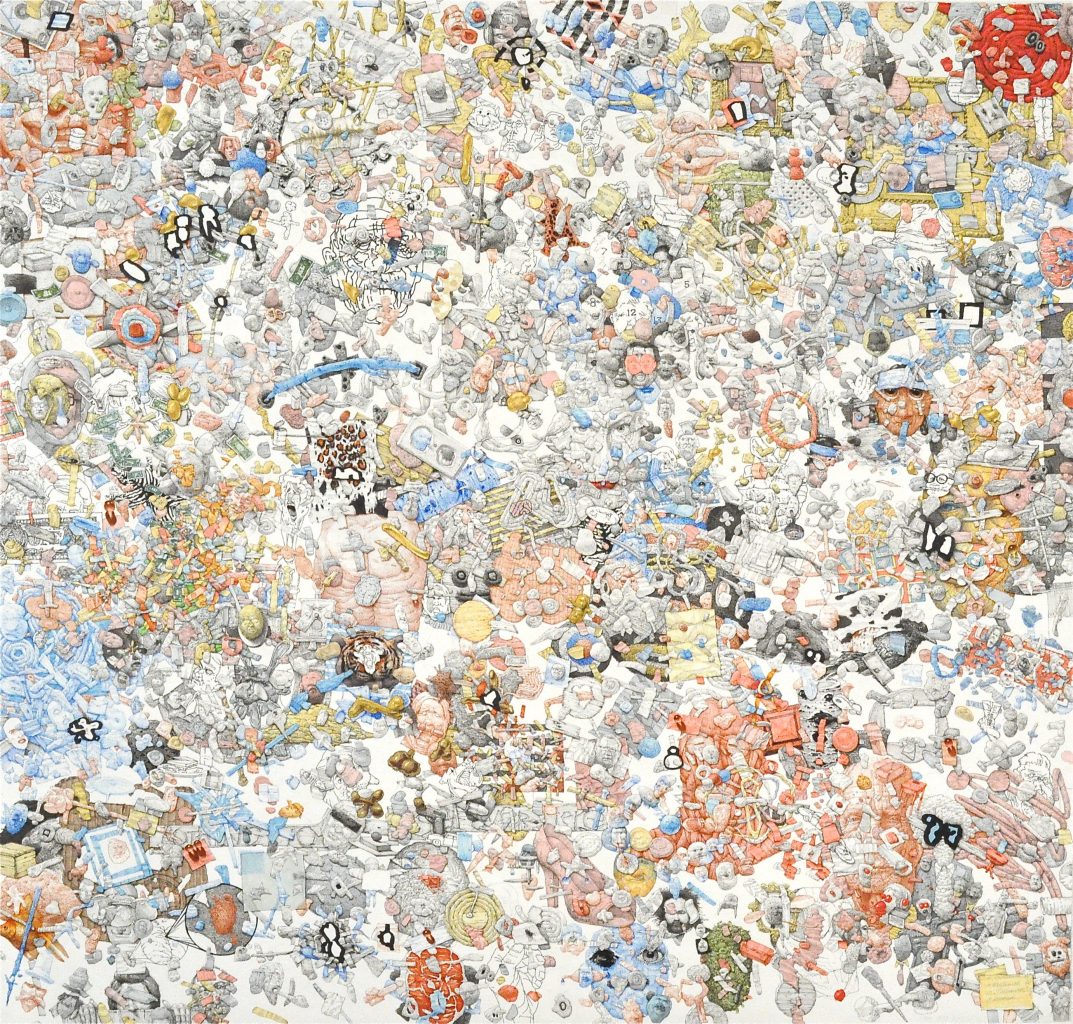 “The Big Tiny” (an early stage)

“The Big Tiny” is about the best-known recent example of Smith’s attention to detail, and his tightly woven
imagery. This 49” x 47” colored drawing was the main feature of his 2016 exhibition at The Gallery at Library Square in Salt Lake City. Creating “The Big Tiny” started as a personal challenge to fill the gray, wintry days in his Westside Salt Lake studio across the street from Welfare Square. Winter came and went. He eventually filled 2,303 square inches of white paper with imaginings. It was “a drawing that took me almost a year of solid work to finish,” he acknowledged in a 15 Bytes interview with Ann Poore.

His devotion to the piece is reminiscent of a Tibetan monk painting an intricate, wrathful deity thangka. To Smith, “The Big Tiny” became like a revered object. Once completed, he preserved it in what could be described as a Plexiglas reliquary that hangs in his studio. Smith admitted to Poore that it’s “like a sacred papyrus. Which it kind of is to me.” Although a significant piece of work, Smith doesn’t see it as high art or as something that accrues him or those who view it with spiritual merit as do thangkas. “The Big Tiny” came into existence, he claimed in Claudia Sisemore’s 2016 film about him, because its maker is “a professional fiddler, professional goofer” who also plays golf — a lot.

Smith’s break from painting to drawing was full-blown iconoclastic tinkering. His work bursts from his imagination onto paper like the mythological Athena who sprang fully armed from the forehead of her father, Zeus. Athena could be Smith’s studio consort; she is the goddess of war, wisdom, and art — Smith’s script in trade. Unlike the Medusa-faced shield and spear-gripped hands of Athena, Smith holds fast to sharpened pencils and packs of markers in his assault on rolls of fine paper while tweaking our perception of depth and volume while fine-tuning the reverb on his studio sound system as Tom Waits sings (growls), “We’re all mad here.” 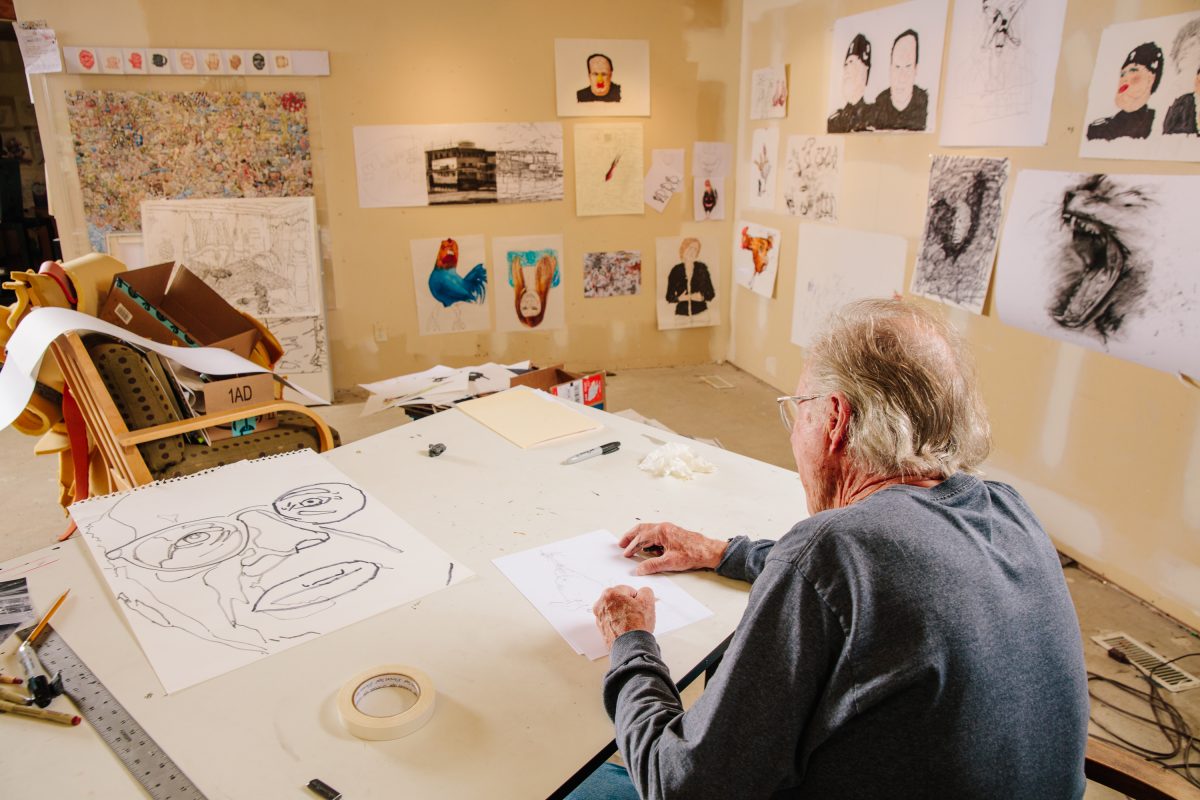 Smith at work in his studio, June, 2019, photo by Simon Blundell