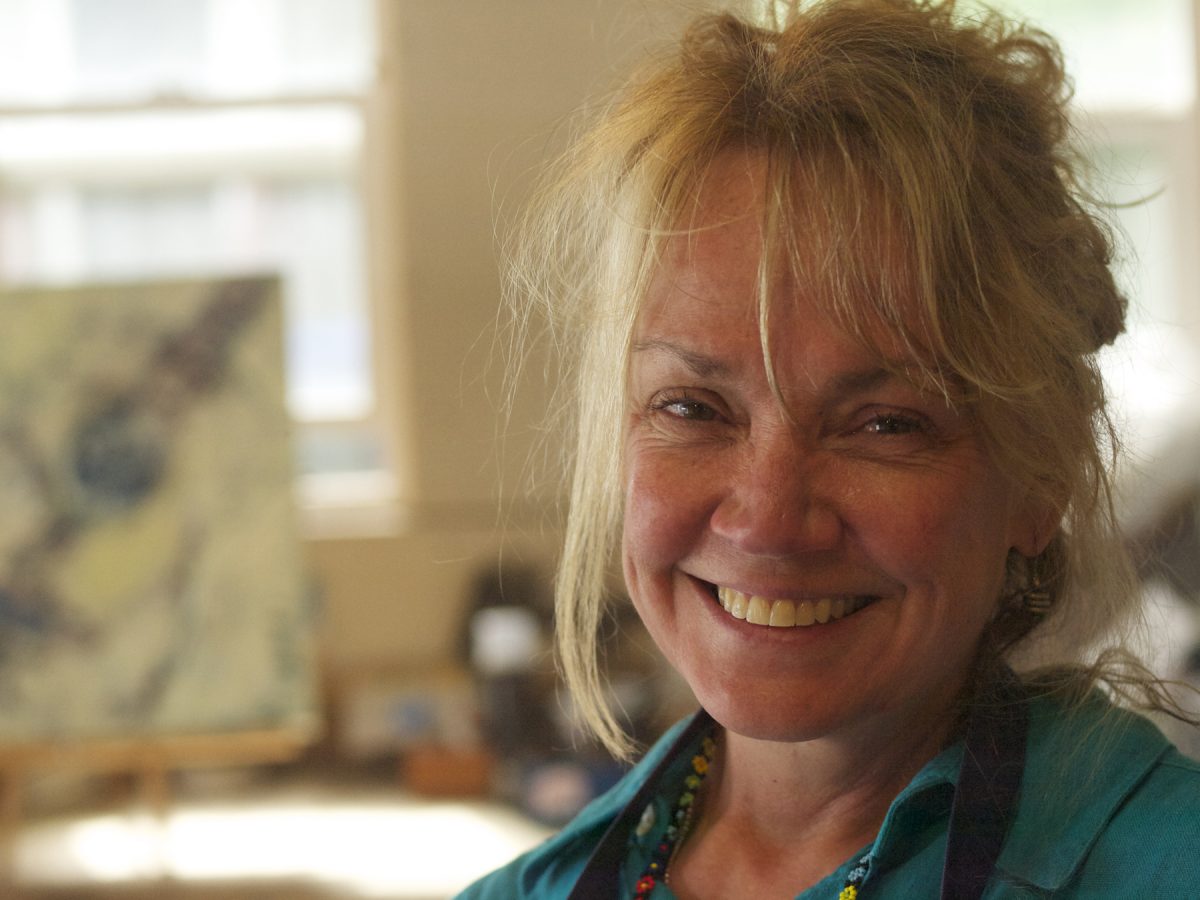 An architect who rescues greyhounds retired from racing; an accomplished artist who does paintings of the saxophones she plays; an environmentalist who recycles to an admittedly obsessive extent — Toni Youngblood is an intriguing woman who constantly keeps busy.

Though she works in a variety of mediums, encaustic is her current fascination, and a number of works in this medium will be on display at Bountiful’s Howa Gallery for its grand opening. Youngblood loves the colors, textures and layers in encaustic work: “I’m not tempted to do anything really representational,” she states. “You can scrape down to previous colors and then re-fuse it with a torch and that will smooth things out. But sometimes I just love the scraping marks. And it smells so good.” She lifts up a finished work for me to check out and it, indeed, has a dreamy scent. “Those honeybees,” she says, “the little sweethearts.”

Originally from Atlanta, Youngblood, 61, received her bachelor’s degree in painting from California’s San Jose State University, where she took advanced drawing and advanced ­figure painting classes from LeConte Stewart’s son, Maynard Dixon Stewart. “Back then, I had no idea who LeConte Stewart was . . . I found myself the other night quoting Dix Stewart to my students, ‘You start with the general and then you work towards the specific.’ I just read that Alvin Gittins said the same thing to his students! I don’t know if that came from Gittins to LeConte Stewart to Stewart’s son – I guess it was LeConte Stewart who hired Gittins so they must have had a lot of time to talk. But I thought, ‘Oh my god, here I am saying the same things I learned from his son.’”

She pursued her master’s in architecture at the University of Washington in Seattle. Her thesis was based upon creating a theoretical museum to house the art collection of Harry and Mary Margaret Anderson that she had once worked for in the Bay Area – considered one of the most outstanding private collections of 20th-century American art in the world.  “I knew at some point in the future they were going to be doing this,” says Youngblood. “Either building a museum or donating the collection to a museum, and they had already donated some pieces to the San Francisco Museum of Modern Art. The collector gave me the accession log of all the artwork so I could get measurements of everything, and I knew what everything was and created a design for the museum, but I needed an actual site.” She found one near Stanford University. “Here’s the really funny thing. In this last year, the Andersons actually donated the collection, a big portion of it, to Stanford University and there is a building built there now. I mean it was a dream project for me, and to have it so close to reality.”

She worked as an architect for Starbucks in Seattle for six years, later learning through her Facebook connection with Utah artist Fred Lyman that her favorite boss was, coincidentally, his daughter, Cydnie Horwat. Youngblood moved to Utah in 2006, to work for an architecture firm that had a large reduction in force after she had purchased her house. Nevertheless she was determined to do art – to somehow make that happen. Offered another architecture job, she asked to work a four-day week so she could pursue her artwork. When they said no, she turned them down and “never looked back. I just had to figure out how I could live.”

So she scrambled. She’s managed to juggle mundane jobs, like managing rental properties, with more passionate affairs, like art, and greyhounds.
“I wanted a dog at a point in my life where I owned my own house. But I didn’t want a puppy that would tear up my furniture,” Youngblood recalls. After learning a bit about the retired greyhound population and going to a meet and greet, “I said to myself, this sounds like a perfect dog for me.”  Now, she has two: Harri is her shy little girl and Rocket, called Rocky, her boy.

Greyhounds typically do their maiden race at 18 months and are retired immediately if they don’t take to the sport. They only sprint for 30 seconds several times a week. Those who have a career are retired at 5 or 6 years of age. Usually they are put down by their owners, but organizations are forming to save them, since the dogs live to be 12 to 15. They sleep a lot, are mellow and quiet (“not good watchdogs,” says Youngblood). There are numerous “Adopt a Greyhound” projects in Utah that can be found online. 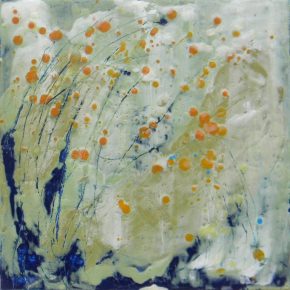 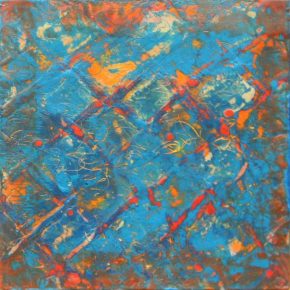 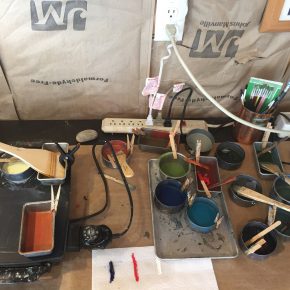 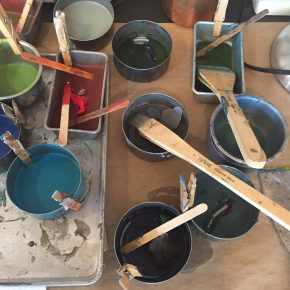 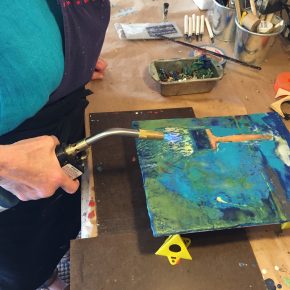 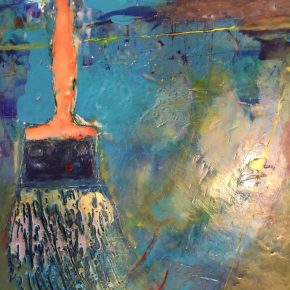 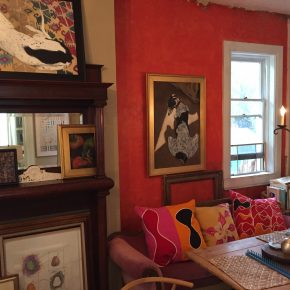 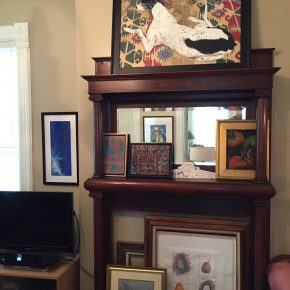 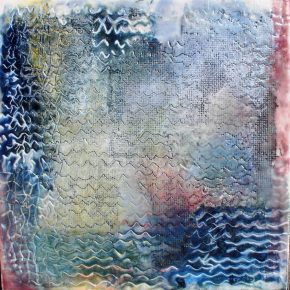 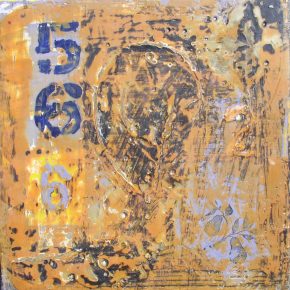 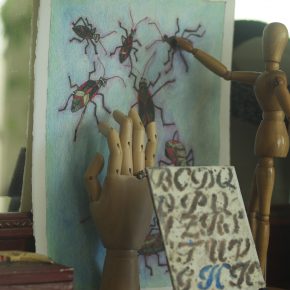 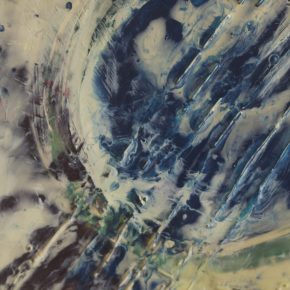 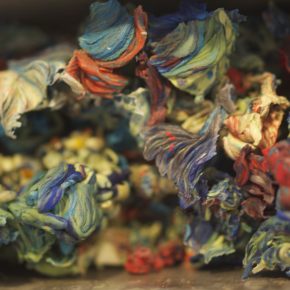 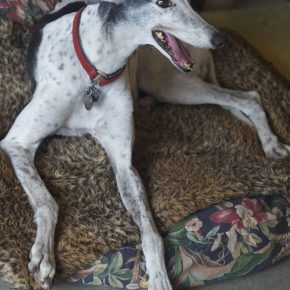 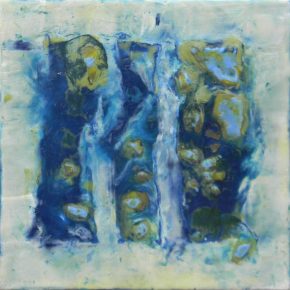 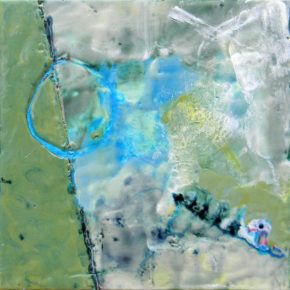 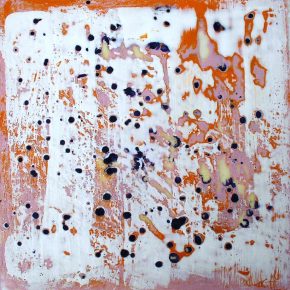 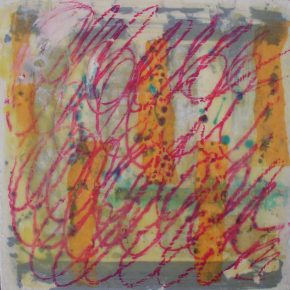 Youngblood had always wanted to learn encaustic, but after seeing a photograph of a friend with two blowtorches and a respirator decided she had better take a workshop before attempting it. In 2009, she went to Berkeley and did so.

Encaustic is painting using hot beeswax to which colored pigments are added. There are other recipes, but this is a basic one. Youngblood buys her colors from her former teacher in California, but sometimes uses oil colors and makes her own encaustic medium. The resulting liquid or paste is then applied to a support, usually plywood or Masonite, and a natural-bristle brush and metal scraping tools are used to move the wax around and shape it before it cools. An alternative heat source, such as a blowtorch or heat gun, is used to bond the layers of wax together — a simple description of a complicated and sometimes dangerous process.
She doesn’t bother with the “professional” tools of the trade, but uses a fondue pot and pancake griddle she found on Craig’s List, and tuna cans (which would “just be thrown away or recycled”) instead of specialty tins for her colors and medium. “I could pay $200 for an encaustic griddle, but why?”

Youngblood decided to name all the finished works on her table after ancient Greco-Roman sites. “But I went to visit that area when it was Turkey,” she explains. “And that work is named after some beautiful hot springs, and they have salt in them and they cascade down the hillside and now it’s called Pamukkale, which means ‘Cotton Castle.’ So I named that one after that place.” The artist is an erudite world traveler who knows the native names of the places she visits.

In addition to encaustic Youngblood paints with acrylic and does watercolor and drawings. “I decided to let go of oils when I started doing encaustic because I love encaustic so much and I didn’t really need to be doing all of those things. I felt that I could do the same thing with acrylic that I could do with oil. You just have to get used to the medium,” she says.

She has an encaustic studio in addition to a painting studio at her charming home just south of Liberty Park. Her indoor studio is magical, with a vintage crystal chandelier hung with a stained-glass star, small artworks, charms and memorabilia. A model airplane hangs from the ceiling, a statue of the Virgin Mary (that she got for half-price) on the mantel. There’s a desk with a computer and two saxophones – one she’s playing; one she’s painting. After seeing the Dave Matthews’ band one night when she was in her 40s and being smitten with the baritone sax player, she decided she had to learn to play the instrument. A few years ago for Christmas her aunt gave her some money and she wanted to spend it in a meaningful way and at first thought she would buy symphony tickets. But she realized they would be gone the next year. Then she thought she might study another language. She wanted to do something with her mind. Youngblood went to Jazz Vespers at the Unitarian Church and told the sax player of her dream to play the sax and her fear that it was way too late for her to learn. He said he could teach her and offered to exchange lessons for artwork so she bought a used sax and, at age 57, began playing.  She has a keyboard in her studio and is painting a series of musical instruments.

Youngblood thinks art-making is healthy:  “I can tell when I haven’t been doing it enough. I feel that way not just about myself but about other people. I think it really is a good therapy. Whether that is because we have gotten away from using our hands in creating anything or whether it’s creating art, but I have seen in people how they can get into a zone, which I think is a wonderful zone and you can get into that zone without drugs or alcohol when you’re doing your artwork – so I guess it’s better than medicine.” 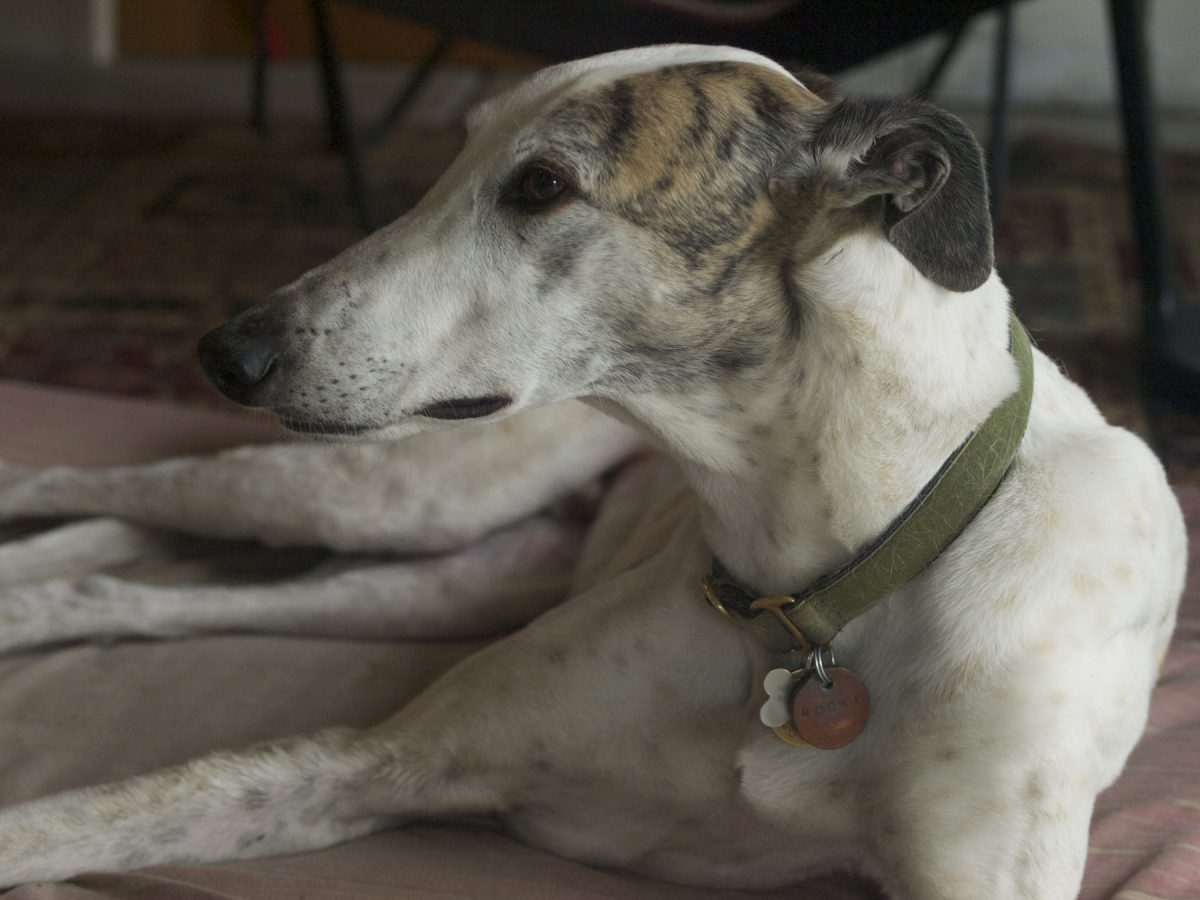 Toni Youngblood’s encaustic works are included in the grand opening exhibition at Thomas J. Howa’s gallery on Saturday, May 9, from 4-9 p.m. Nearly 30 artists, almost all from Utah, will be featured in the inaugural event at 390 N. 500 West in Bountiful.

This article originally appeared in the May 2015 edition of 15 Bytes.