The Universal in Levi S. Peterson’s The Canyons of Grace

“Out of characters struggling between religious convictions and emotional contradictions, Peterson manages to create an intense vision of Mormon life in the Mormon West.”
—Page Stegner 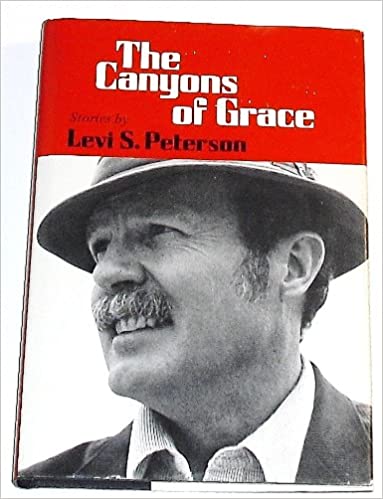 In the 19th century, Utah communities collaborated to send their most promising artists to Europe to be trained to the standards of the day. The LDS Church in Salt Lake dispatched the Paris Art Mission, eight painters whose new-found sophistication kicked off the golden age of Mormon art, arguably ongoing. In the 20th century, something similar happened with Utah writers, who went abroad in another way: to secular U.S. schools with literary track records. By then a more diverse group, they wrote poetry, novels, stories, essays, history, biography, and autobiography, achieving levels of quality as high, or higher than, what was done in the other states. Wallace Stegner went to Iowa. His son Page chose Stanford. Juanita Brooks followed BYU and Dixie with Columbia in New York. Fawn Brodie attended the University of Chicago and UCLA. While they and others identified as Mormon, they pursued a level of personal freedom within their unbreakable connection to their Church.

Even in this group, Levi S Peterson stands out for the degree of his independence, going so far as to reject not only the hegemony of the Church, but the purported nature of a Christian God, even as he remains a fixture of Mormon letters. He also places great stress on the influence of his mother throughout his life, and when asked, for example, about his choice to remain in Utah, stresses his wife’s preference equally. While it’s hard to imagine what a feminist man born in 1933 would look like, he clearly found in himself a feminine persona that he chooses not to keep secret. It may sound counterintuitive today to measure his sensitivity to women by how plain he makes those in his stories, but in retrospect he seems to have sought a technique to focus on their strength of character instead of their cosmetics.

Peterson’s novels and stories, which date from 1982 to 2006, capture Southwestern experience with a vivid specificity few authors can match, striving to reconfigure the Mythical West by revealing the reality of life as it was on the frontier, and still is in its sparse remains. He presents a candid panorama of Mormon life that, while it may discomfort some readers, offers a much richer picture of his people’s unique, yet essentially human qualities.

In “Road to Damascus,” one of six long stories in The Canyons of Grace, two scenes illustrate his ability to make visible the conflicts, simultaneously external and internal, that Page Stegner so succinctly invokes. Here a man aptly named Paul considers the satisfying, orderly patterns he has imposed on his land:

The alfalfa stretched across broad acres, thick and green, rippled by the morning wind into slow waves. Along deep rows, the corn grew into a great entangled thicket of stalks, blades, and tassels. With his draft horses Paul had plowed, harrowed, and furrowed. With a heavy bag he walked the fields in the windy spring and sowed his grain. He thrust seed corn into the ground with a sharp-nosed planter. He went at night as often as in the day to take his turn at the irrigation water from the canals, laboring wordlessly for uninterrupted hours, bending his back, straining his arms, lifting out mud with his shovel, filling here and excavating there until his land had slacked its thirst. Weren’t these fields a reason for Paul to think well of himself?

But when he ascends the mountains, his former life as an enterprising silver miner calls to him, and the landscape changes abruptly:

Paul entered a canyon. Its massive slopes were lacerated by gullies, ravines, and lateral canyons. Forests of oak, fir, and aspen grew upon its sides. The trail led generally along the bottom, frequently paralleling it some yards above, though at times leaving it for hundreds of yards and zigzagging back and forth over the steep face. It was a faint trail, rarely travelled, slowly being reclaimed by the canyon. Paul’s anticipation rose. There would be thick tobacco smoke and the odor of frying sidemeat in Sam’s cabin; there would be talk about the old days, about places they had been, women they had known, golden opportunities they had almost grasped. Paul suddenly felt free. Glimpses of the valley, far below, told him how high he had come. He had cast off his impediments. He possessed the floating power of an eagle; he felt the unweighted swing of a diving hawk.

These two contrasting passages capture the tension that energizes Peterson’s fiction: between his protagonists’ desire to succeed in their own eyes and the risk of failing their covenants with family, community, church, or God. He claims that, according to many religions, “God dispenses his blessings at a high price,” but counter argues that “God is no enemy of human appetite.” He abjures obedience for its own sake and pointless self-denial, asking what sort of God wants his creation to reject what He has created. Such observations open up dauntingly complex, challenging puzzles that he has devoted his life to solving. Occasionally the answer comes like a punchline, as when a ward bishop and a stake president, after failing to rein in a woman full of unabashed pioneer spirit, decide it’s a good time to retire.

In “The Confessions of Augustine,” which opens The Canyons of Grace and marks Peterson’s formal self-introduction, Fremont Dunham’s challenges come early and are romantic, but in very different ways: a hazardous career in logging and a forbidden attraction to a Baptist girl. A chance reading, years later, of Augustine of Hippo, one of the most influential figures in early Christian thought, reminds Dunham of his struggle with those temptations. Peterson invokes these early Christians not to endorse their theology, but to establish that error is a universal human experience. His knowledge of Latter-Day Saints’ history and culture is encyclopedically vast, and every story he tells takes place on multiple intersecting planes of real places and credible events, theological practices and psychological facts. He finds exemplars of typical human types everywhere around him, and some of the most universal in himself.