The Object Moved by Its Own Success

The Object Moved by Its Own Success:
Alex Gross and Sandy Smith at CUAC
by Geoff Wichert

“These artists are masters of their materials; their work is clear where they want it to be clear.”—Adam Bateman, founding curator of CUAC’s contemporary program. 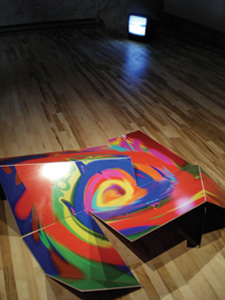 Marcel Duchamp provocatively said that the lifespan of a work of art is about fifty years. After that, presumably it becomes an antique: a dead work suitable for collection, but no longer speaking in its own voice. We might add that the passage of time has only shortened the lifespan of cultural events; in the present political and economic cycles we are frequently reminded that 24 hours is now an era, and 72 is an eon. A good idea of what Duchamp meant can be had by comparing our routine, relatively superficial encounter with the western landscape through great past painters—Cole, Bierstadt, Church—and the way the same encounter comes alive in the compound, nuanced, and layered installation of Alex Gross and Sandy Smith currently at the Central Utah Art Center in Ephraim. Its two creators, one originally from Berlin and the other from Edinburgh, live in Glasgow but recently spent two and a half months crisscrossing the American West, getting to know personally what had previously been their imaginations’ impressions from the region’s years of service as backdrop for photos, films, and stories calculated to evoke a sense of place at once familiar and strange. Logging 8,000 miles over ten weeks in a rented van that was by turns their transportation, viewing platform, home, and studio, they gradually sifted their impressions into five vignettes that share the otherwise empty space of this building that, with its limestone and plaster walls, timber-trussed ceiling, and undivided wood floors is itself both a relic and a time machine.

The landscapes that most popularly represent “the West” are many things, including romantic, literary, and grandiloquent. Their realistic appearance, though, is but an illusion created by merging closely observed, local details into a fiction: a Platonic ideal one could never actually behold. It’s well known that painters like Bierstadt sold well to railroad magnates, who used painted illusions to draw travelers along their routes even as they were bisecting those vistas into ever-smaller quadrants, each suitable for despoliation by developers. Thus the carpenter who was repairing water damage in a gallery the other day was instantly able to identify the works that spoke to him: two desert scenes he said he “recognized instantly.” That neither was framed by the car window, or admitted the road from which he was used to seeing them, the power lines that are all-but ubiquitous in Utah, contrails from passing aircraft, or the odd remains left everywhere by enterprise not only gave him no pause, but the absence of those distractions was obviously one of these artworks’ virtues, and such judicious visual editing a major advantage of art over reality.

A truism of art in 2008 is that the market is part of the medium. For those who indulge in what is sometimes called “Business Art,” a painting shown, say, in the Phillips Gallery, where it is unambiguously for sale, is different from the same canvas shown at the Salt Lake Art Center, where its marketability is asserted as fact. Under this rubric, some techniques are arguably not available to artists within Utah. In New York and Zurich, Duchamp’s 50 years has narrowed to the brief moment of public display between the intimacy of the studio and the privilege of the private collection, an interval that has correspondingly been driven up to the level of spectacle. But since the collectors whose interest guarantees international interest don’t shop in Utah, the heavy mantle of a work’s ultimate disposition is lifted from its shoulders here. Artists—and audiences alike—have a freedom to play and to move about whimsically that those in contention for record prices and slots in the Broad or Saatchi collections do not.

A perfect example can be found on a pedestal in the back of the CUAC main space. On it sit displayed three apparent geodes: those drab spherical rocks that, when broken open, reveal concentric galaxies of radial crystals. Metaphors for the larger wonders that often lie within smaller-seeming packages, familiarity renders them mediocre spectacles that quickly pale in their pursuit of our attention, and they often end up as Gross and Smith present them here: a dusty exhibit on an overlooked table. As such, they have the pathos of an aging exotic dancer in a club well off the Las Vegas Strip, whose torn fishnet stockings elicit a stronger response than her erotic allure. But these aren’t actually geodes; they’re jawbreakers that have had one side licked away to reveal their inner complexity. The cosmos revealed within is a perfect metaphor for the interior spectacle of art: where Damien Hirst uses platinum and diamonds to generate an increasingly new, but also increasingly dull sensation, Gross and Smith employ commonplace materials along with wit, which in the end sharpens both the material and the audience.

The prevalence of the spectacle in our present-day culture is the subject of critical comment by those concerned with ethics or a sense of proportion—and not without justification—but, as shown by the example of geodes, which can be thought of as geological spectacles, extraordinary events can provide an illuminating point of view. As suggested by the broad, empty floors of the CUAC’s galleries that stretch between exhibits like the Bonneville Salt Flats seen in one of two videos, the West—like the physical world and time itself—is a continuum punctuated occasionally, less often as we age, and too rarely for many of us, by events unusual enough to capture our attention. In the Bonneville video we watch sunlight and cloud shadow play over the blank canvas of the saltpan: natural events that despite their beauty soon bore us—at least when confined within the camera’s frame. We are relieved when the two artists finally walk into that frame, but confused by their seeming indifference to our presence and bewildered by the significance of the industrious behavior that follows. Only when they are done and we are left to contemplate the detritus that remains behind, staining the sparkling white stage, do we recognize our own reflection in the mirror. In case we’re not feeling indicted, should we wander close to the projected image our own shadow appears on the salt as well, placing us, like the children who obediently pose in front of Old Faithful in the show’s other video, present at the event.

In addition to the films, there are two landscape models on display. One is large and resembles a model railroad, which like a three-dimensional equivalent of the conventional landscape painting compresses attractive features into idealized space. Gross and Smith’s model does not. Instead, unnatural and unlikely (but not entirely unreasonable) colors and a pair of unwelcome but clearly engineered structures—one perhaps a billboard and the other a vista-devouring hilltop home on stilts—capture our conflicted response to our own potency. That ambivalence, which is not the same thing as ambiguity, is central to The Object Moved by Its Own Success, but is not its verdict. Art today is also a dialogue, and Alex Gross and Sandy Smith expect their spectacle to falter before the infinite time and space occupied by their subject matter. Or they hope to become part of it, absorbed by the larger spectacle. 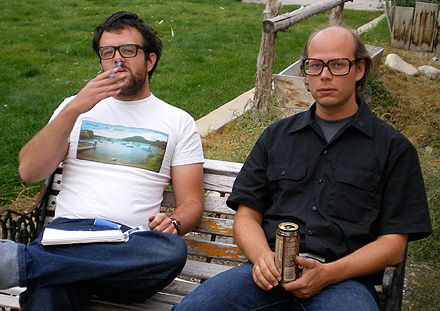