The Moving Art of the Still Life 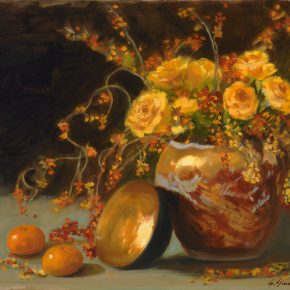 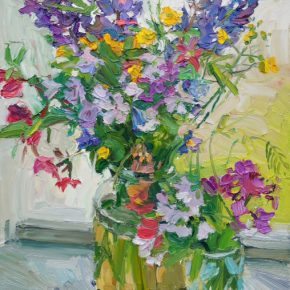 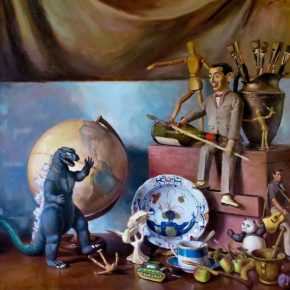 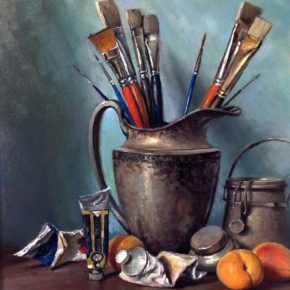 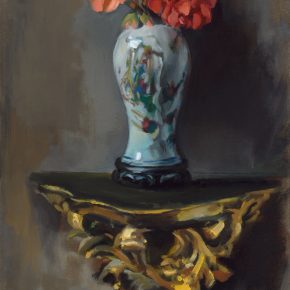 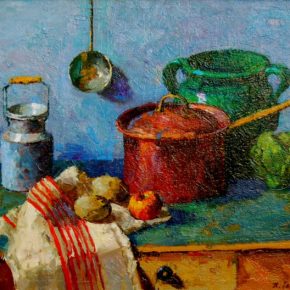 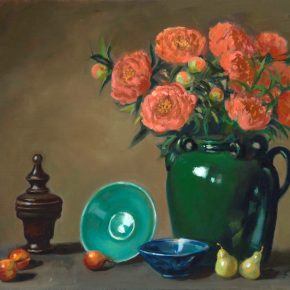 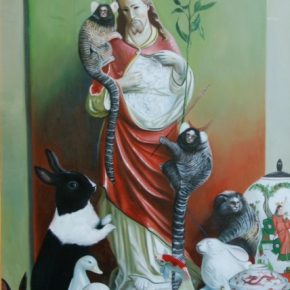 Three Salt Lake City galleries are currently showing still life paintings: one-person shows at Phillips Gallery and Charley Hafen, and a group show at Slusser Gallery. All of them close soon, but are definitely worth taking the time to see. We spoke with a couple of the artists about the attraction of the still life.

In the past, the still-life genre has produced works of art with mostly inanimate subject matter. It became a professional specialization in Western painting by the late 16th century and has been popular ever since, although at one time was viewed as being at the lowest level in the rankings of genres.  Still life evolved from the background details painted in large compositions, bringing those minor elements to the fore and rearranging them: metal ware, flowers or recently caught game might be used symbolically or simply as emblems of wealth and power in a time of widespread poverty. Now, however, aesthetics and the artist’s psyche eclipse the illustrative aspects popular in earlier times.

The current exhibit at Slusser Gallery highlights the infinite styles, visions and concepts of the genre and demonstrates that still life is alive and well in the 21st century. There are a number of well-known local artists—painters like Paul Davis, Randall Lake,  Mark Slusser, Rick Graham and Justin Wheatley—as well as lesser known but equally talented artists like Russian painter Anastasia Dukhanina, Courtney Derrick and Joann Musser. The subject matter ranges from the traditional, as in Dukhanina’s flower arrangements or Lake’s “Nature Morte Au Cuivre,” to the more contemporary, like Justin Wheatley’s “Sacred Heart,” where the nature is more “vivante” than “morte,” or Paul Davis’ painting of stacks of piled-up wood adorned with figures and glimpses of houses.

At Phillips, the downstairs Dibble Gallery presents the first one-man show of Simone Simonian, featuring his landscapes and still lifes. Simonian has been in Utah since age 11 and studied with the late Alvin Gittins, who, in Simonian’s opinion, was “the best of the best” at the University of Utah. Although Gittins’ focus was portraiture, he was often heard to say “… if you can paint a portrait, you can paint anything” and that’s what Simonian wanted. He says he’s attracted to the still life because it gives him the time to “observe things and have the opportunity to do it without having a moving target [as in painting portraits]. It’s beautiful, it gives you an opportunity to observe the effects of light, to conceptualize your work…You can say this painting is going to be about color, or the way the light moves, or how I’m going to control the viewer to see what I want them to see.”

He describes the evolution of one of his pieces: “I often visited a place whose perimeter was surrounded by bamboo. Over time I watched the color of the bamboo change and asked if I could take a piece that appealed to me. The arc of that bamboo and the way the light falls on it in my arrangement creates a beautiful composition that draws you into and around the scene.”  The shadows on the right side of a sconce in another painting he views as crucial— “without them the piece would be nothing, just as the gilding on the sconce, if painted as one solid hue would be quite dull. You have to study it carefully to see the variances and how the light source affects it.” He believes that most Westerners, having been taught to read print from left to right, also read art in the same way (although probably subconsciously). His observation prompted us to look again at some of his work, and indeed, it felt quite natural to “read” them that way. It also enhanced our comprehension of his way of using light in his work.

He loves things with great sheen and highlights. “When you paint under this beautiful north window,” he says of his studio, “you get to see how light explains form in such a beautiful way. The way you can make the light leap from one thing to another and come to a crescendo and finally end. It’s like a song, it’s more than just a still life, it’s a story.”

David Estes, who is showing this month at Charley Hafen Gallery, also appreciates the control the still life can provide. It allows the work to be more personal. “You can go out and paint a landscape, but [with still lifes] you can arrange the things you have in the studio and make your own ‘landscapes,’ and they say something about you.” Estes agrees with Simonian that still lifes can tell a story, but views it from a different angle. The objects he chooses often have some personal significance, whether it’s who gave them to him, or his mood, or are reminders of his late mother, or a result of his musings when not at the studio. Sometimes he paints a still life because the objects in it are “just plain beautiful.”

Where Simonian uses light to direct the viewer’s eye, Estes uses what he calls “paths through the painting.” Composition is the key for him—the placement of objects and the space between them create his paths.  But they also tell a story. For example, one of his paintings at Charley Hafen has a rubber figure of Godzilla in it along with other interesting objects he has found or have been given to him. “I was struggling with a painting, working it over and over and over. I got so frustrated that I just wanted to throw my brushes on the floor and stomp all over them. Then my eye caught the Godzilla figure in my studio. I felt just like Godzilla, so I abandoned the other painting and set this one up with him in it.”

Another painting has two yellow porcelain figures in it, also a gift from a friend. Estes describes being at home, letting his mind wander and imagining what’s happening back at the studio. He sees the two figures as protecting the place and all the beings and objects in it, hence the title “Night Guards.”  Another piece is personal to Estes in a different way. It seems to say, “This is me – with gifts from friends, objects I love and the tools that make me an artist…”

The idea of the still life may seem static—an arrangement of items that left alone will never change. But as these contemporary Utah artists demonstrate, the genre provides ample room for stylistic interpretation and narrative play.