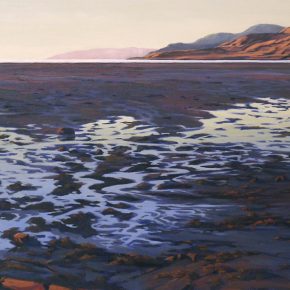 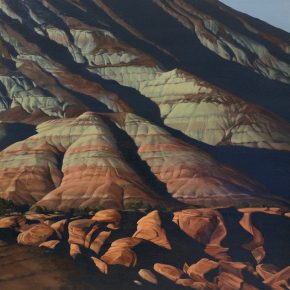 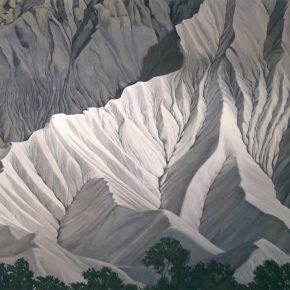 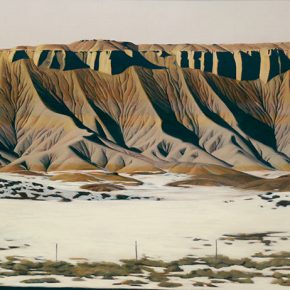 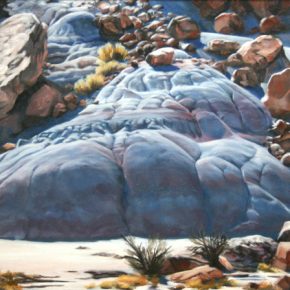 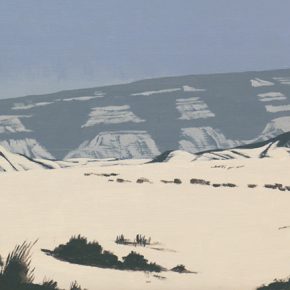 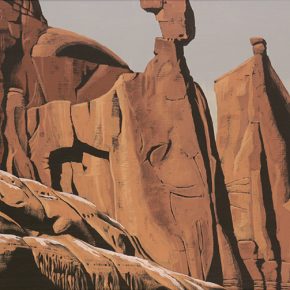 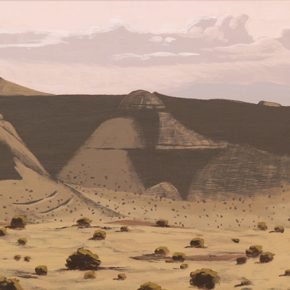 “You two just keep getting better,” Denis Phillips observed Wednesday afternoon at a walkthrough of the terrific new show by Mark Knudsen and Leslie Thomas. And he’s an artist who doesn’t hand out compliments readily.

The public seems to agree: five paintings have sold already including a 24”x 84” canvas by Knudsen, and two of Thomas’s while they lay flat on the floor waiting to be hung for tonight’s opening. This couple’s “The Modern Western Landscape,” a beautifully realized show of southern Utah’s redrock country and canyons, is well worth putting on your Gallery Stroll itinerary.

Knudsen’s work is fairly hard-edged in thin acrylic on panel, often including reminders of humankind; Thomas’s is softer, more lyrical, in often thickly textured oil on linen. As a surprise, there are a number of pleasing winterscapes in this presentation, some inside Arches. “The light’s good all day and you don’t have to get up at 5:30 to get to that place you saw that you thought might be good at 6,” says Thomas. “Raking light is so much easier to paint.” But there’s also a captivating work, “Dark Shores II,” she did of the Great Salt Lake in evening with Antelope and Fremont islands in the distance.

Their back story is pretty well known. After 20 years as a computer engineer, Thomas returned to painting and studied primarily under now-husband Mark (evident for a time in her style, although she has decidedly come into her own).

Knudsen studied fine art at the U under “some of the best” in ’69 and ’70 and spent his career in the Art department at The Salt Lake Tribune, where he also did a considerable amount of writing. He retired nine years ago to become a full-time artist.

In response to Denis Phillips’ remark, Knudsen said: “We don’t really have lives, so we just paint all the time.” And that’s pretty much the truth. With studios in Sugar House and Moab, and touring between the two with their terriers, Betty and Trungpa, taking numerous photos later to be turned into paintings, the couple only seems to pause occasionally for good wine and food, good friends, and good books.

What’s core to this artwork is that the subject matter isn’t just painted but deeply appreciated. “Leslie started to cry,” Knudsen recalls, when they saw their first reintroduced California condor at the Grand Canyon, a moment he memorializes in “Condor at the South Rim.” In “Beyond Papa Joe’s” he says he tries to show the desert’s “mysterious quality and slightly dangerous feel.” About “Coyote Mesa #2” he explains he was trying to convey the idea of a landscape that says, “You’re not welcome here. This is a wild place.” Thomas talks about the rock in “Morrison Wingate” as “kind of poisonous; kind of gorgeous” and told her husband, when she saw the marshmallow-appearing multicolored Morrison Formation in her exquisite “On the Mine Road”: “This is the place I was born to paint.”

In this couple’s work, the land, the light, even the geology, is thoroughly understood and enticingly interpreted.