The Holy Scripture of Our Life: Shawn Vestal’s “Daredevils” 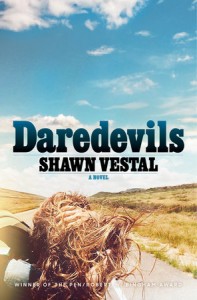 It’s 1975 and teen-ager Jason Harder, who lives on a dairy farm in Gooding, Idaho, has a lot to be embarrassed about. There’s the whole religion thing: the reactionary faith of his community with its lengthening list of end-times indicators, including “nudity and sex talk in movies,” the Equal Rights Amendment, the fall of Saigon, communists and “jackrabbits eating farmer out of house and home.” Then there’s Jason’s Uncle Dean, a soured polygamist from Short Creek on the Utah/Arizona border, who has just moved to town with his wife and kids along with a mysterious girl named Loretta whom his uncle claims is his wife’s visiting niece. The family has an “air of self-imposed privation,” but Jason finds the young Loretta, his uncle’s secret second wife, hopelessly alluring.

Embarrassing as well is the “bunny bash” Uncle Dean has called–a brutal, community event where jackrabbits are routed out with brushfire along a temporary fence to a pen where boys and men with baseball bats do their bloody, adrenalized deeds while angry protesters as well as the press are gathered around and making a scene.

No wonder, then, that Jason has taken a shine to Evel Knievel who, in Shawn Vestal’s debut novel Daredevils (Penguin Press), reappears in the narration using the royal “we” under the recurring heading “Evel Knievel Addresses an Adoring Nation.” Two years earlier Jason’s now-dead grandfather detoured from church with his grandson to see the motorcyclist attempt to jump the Snake River Canyon in nearby Twin Falls on the steam-powered X-2 Skycycle: “A little mischief is good for the soul,” he remembers his grandfather telling him, “leveling a thick, crooked finger toward the road ahead, as if that were mischief right there, fat and smiling on Highway 10. He says, ‘There’s  nothing wrong with this’.”

Set in the rural Mountain West, Daredevils is a coming-of-age story, as bone-crunching as Knievel’s crash at Vegas’ Caesar’s Palace or England’s Wembley Stadium. Yet the book, released this month, is scented with the sagebrush and dairy farms of high  desert America; riven with the tenacious, arid religion of a particularly American kind; and beholden to America’s dick-thumping fix on celebrities, like Knievel.

The novel is an unparalleled tale of the country’s excess, lunacy and delusion—as personified by the loutish Knievel who describes “the best kind of love, the only kind of love [. . . as] wild, momentary, complete.” At the same time the book’s compelling cross between Napoleon Dynamite and Fear and Loathing in Las Vegas somehow grounds the reader in a tender and hard-won decency in which Loretta and Jason along with the young Native American Boyd—in search of his father and an entree into the American Indian Movement of the era­­—head out on the road in a stolen Chrysler LeBaron.

Vestal has already favored us with his eclectic, illuminating short fiction in Godforsaken Idaho (Houghton Mifflin Harcourt, 2013), winner of the PEN/Robert W. Bingham Prize. In that inventive debut collection, he seems to have singlehandedly advanced both Western and Mormon literature in nine stories that careen from a hellish kind of heaven in “The First Several Hundred Years Following My Death” to a lapsed Latter-day Saint faced with his doppelganger in the form of a persistent missionary. In the final triptych of the collection, the stories kick into high sectarian gear, ending with “Diviner,” in which founding Mormon prophet Joseph Smith, smitten with treasure hunting, appears in one of his most arresting if not generous portraits.

In Daredevils, Vestal not only judiciously sets his story of religionists and misfits, pedophiles and imposters in the region (others have done that, including most recently David Kranes in his The Legend’s Daughter, also set in Idaho) but he makes no apology about informing all of it through the marrow-deep impulses of what is arguably the civilizing force of that region: the religion of Smith and Brigham Young. It’s as if Vestal has recovered the revelatory “peep stones” of the author’s childhood faith, thrown them into the bottom of a darkened hat, which Smith reportedly did, and then started writing: a gift to the general reader who knows little more about the country’s most “successful” indigenous religion than David Archuleta and HBO’s Big Love.

Wisely, Vestal is first and foremost a skillful writer of authentic exposition and trenchant dialogue. His main character, Loretta, along with her “sister wife” Ruth, share a stinging grief, the younger woman’s based on her attempt to imagine the story of her young life under patriarchal faith, and the older woman’s based on the real event of the 1953 Short Creek raid of polygamists by Federal agents which left her, as a child, traumatized. But Vestal never allows the reader to believe that any of this arguably extreme communal behavior, saturated as it is with prophets and gold, endless prayers and “the ugly tether of family” exists anywhere other than on a cultural continuum with throat-slitting revelators on one end and the likes of Mitt Romney on the other.

In the end, this wild, epic, noir-ish tale posits its own prophet whose pronouncements throughout speak to an America ruthlessly defensive about, in the words of Knievel, the “perversion of our story, the holy scripture of our life.”

“When did we first think of jumping the canyon?” he says in the opening address to the “adoring nation.”

How Shawn Vestal in Daredevils navigates his charges through such a determined promised land as that is the stuff of one of the most propulsive, deeply interrogative novels of late. 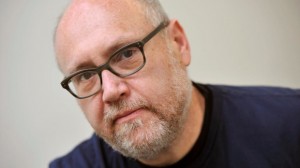 Shawn Vestal made his literary debut with Godforsaken Idaho, a story collection that won the 2014 PEN Robert W. Bingham Prize and was shortlisted for the Saroyan Prize. A graduate of the Eastern Washington University MFA program, his stories have appeared in Tin House, Ecotone, McSweeney’s, The Southern Review and other journals. He writes a column for The Spokesman-Review in Spokane, Washington, where he lives with his wife and son.