The Cost of Anything at Alice Gallery 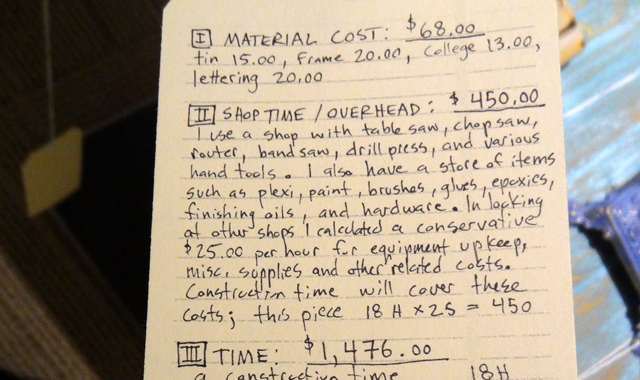 The art world is full of strange processes, from the rituals artists use to give themselves ideas, to the crafts they employ in bringing these inspirations into being, and so on to the necessary habits and innovations employed by audiences in sorting out the results. One of the strangest of these processes is the way works of art are brought together to fill galleries. In spite of the connecting themes and strong sympathies often apparent in an exhibition, the works themselves rarely come about in response to the words on the sign. A dozen artists in the full stride of their careers don’t suddenly go off on a common subject, like painting the same mountain. Instead, gallerists, curators, or the artists themselves settle on something they’ve discovered among known works, the art inspiring the theme instead of the other way ‘round.

The Cost of Anything, 20 works by six artists in the two cozy rooms of Alice Gallery, strives to be the exception. Yes, all these works existed, and had probably been shown independently, but then their makers agreed to remake them: to transform art into meta-art, moving them one step up the ladder of allegory (meta=beyond), making them self-referential as well. They agreed, in response to an assertion by Henry David Thoreau . . .

‘The cost of a thing is the amount of what I call life which is required to be exchanged for it, immediately or in the long run’

. . . to assess the various specific costs, in dollars and cents, of these pre-existing works, using a simple template to report the result: a paper tag tied to each work with string. Consequently, viewers see at least two simultaneous shows, an experience a little like watching a movie with the director’s commentary on. Borrowing from theatrical jargon, they view the physical work with disbelief suspended: the image fools the eye; the sculptural object is taken for real. At the same time, the tag pierces the fourth wall, making viewers aware of special tools and raw materials lined up on shelves, modified by the labor of turning them into what is seen, labor backed by countless hours spent over years developing and honing the skills, all eventually wielded for the times specified on the tags. Other costs, as will be seen, remain ephemeral. The presence in each case of two works in a single form—one a relatively conventional two- or three-dimensional object submitted for delectation, while the second shatters the conventions of the first—challenges viewers even as it assaults the works. Seeing a price-per-hour posted next to the objet undermines its aura and raises powerful doubts: can both survive.

Before trying to answer that question, a disclosure. Adam Larsen, one of these six, was my department chairman when I taught art history as an adjunct professor at Snow College. In Utah, as in many places, adjuncts are viewed with contempt, seen by even their friends among the permanent faculty as inexpensive, unqualified replacements who undermine their rights and prerogatives: all part of the ongoing project by the oligarchs to reduce education to vocational training. Consequently, and despite our friendship, I doubt I could evaluate him any more objectively as an employer than he could judge me as a temporary employee.

Yet I can say without fear of contradiction that Larsen is an exemplary artist and astonishingly gifted craftsman. In prints like “Year of the Sheep”(2015), always sharply executed (even when printed on fabric) and immaculately presented, he draws on children’s toys and points of view to witness and comment on adult economic, political, and social concerns. In his variously-styled assemblages—some, like “Lernen Sie Deutsch!”(2009), are disguised as books, while others involve elaborate, imaginary devices resembling airplanes or coffins—resonantly weathered, recycled machine parts represent and reconfigure human experiences of time, aging, wearing down and wearing out, all leading ultimately to death. As an active artist who not only teaches art, but the professional skills beyond art making that student artists also need, he knows the ropes, from the ubiquitous search for ideas to the finicky details of mounting a show. He knows what The Cost of Everything seeks to impart, and how best to reveal it.

Madison Smith’s outstanding deck of cards, designated “Thoreau’s Solitaire” and featuring an image of the influential naturalist and prolific author on the back of each card, straight away undermines the notion that everything in the gallery predates settling on the Thoreau quote as theme. Yet perusal of the fifty-four exquisite miniatures, one on the face of each standard playing card, reveals an artist too canny to belabor the point. Instead, they suggest 21st-century extensions of the Transcendentalist’s encyclopedic social and environmental views on life. Or the product of acquisitive eyes in tandem with a skilled draftsman. His share of the exhibition makes perhaps the most straightforward and transparent claim on the premise, though. A deck of cards, however artistic, is easily seen as commodity: one that resembles other, similar games and their props, without unduly obscuring the skilled labor shown by it.

Perhaps the opposite applies to Chris Purdie’s “When Something Old Becomes New and Vice Versa . . .” an artifact accompanied by a two-hour video recording its fabrication. While the parts, including a seasoned wheel barrow, a video cassette, and an initially mysterious load of concrete rubble, must possess some intrinsic value beyond their surprising visual appeal, what connects them baffles the mind unless and until a substantial fragment of those two hours have been invested in the riddle. In fact, what unites them eventually appears to be a philosophical exercise rooted in the meanings of ”old” and ”new,“ and the unexpected changes that may ensue when one becomes the other. Those who enjoy living in their own heads while contemplating words and meanings may find this utterly engaging; someone who carries the unique scars only a wheelbarrow can impart should not expect an improved opinion from the experience.

Paul Woods’ “Skier” serves here like a compass, orienting the majority of the works, sculptural and made from salvaged materials, to the more familiar world of framed paintings, which in spite of recent trends still set the standard for art prices. The recent news that Christie’s auction house sold over a billion dollars worth of art in one week (in fact, in three days) if nothing else shows the virtue of a recognized measure when things no longer make sense.

In Abraham Kimball, assemblage—to use the proper term for art crafted from found materials that retain their original identity as part of their meaning—can be seen to have transcended its ”classical” form, if that term can be stretched to accommodate these rude, expressive visual parables. In the lithograph “Phrrho,” he paints images of the sort of found objects he otherwise presents in “Memento Mori” and “The First and Most Basic Instrument.” In fact, the card attached to the print specifies that these objects were discarded after serving as models, their costs left un-enumerated. Appropriately, the ”bill” for the assemblage details almost 200 hours of ”thought time,“ ”Construction/Deconstruction,” ”fiddling,” and ”Communication,“ among other unsung, yet mundane parts of the art-making process, yet fixes a value on few of the numerous objects included.

Jason Lanegan raises more issues about what might be called the aesthetic value of his works than he does about their cost of making. Like several others, he insightfully argues that an indispensable measure of the cost of art is what the time used would be worth if spent on more conventional pursuits. He calculates that his teaching, lectures, and the workshops he gives add up to a value of $36 per hour, perhaps a more convincing number than the seemingly arbitrary wage figures, based on skill and experience, that others seem to pull out of a hat. Lanegan’s series title, “Be Ye Clean,” suggests a religious conceit—indeed, the work makes a possibly facetious connection between spiritual and physical health—that is reinforced by the visual invocation of reliquaries, especially that most wonderfully-named monstrance, the ostensorium. These vessels, used in Catholic and Anglican churches to exhibit a holy object, here perform a commercial function for quack nostrums.

By a fortuitous coincidence, I visited The Cost of Anything mere hours after touring the new LDS temple in Payson, which alerted me to a stylistic resonance of which heretofore I remained ignorant, between the eclectic quality of Utah’s leading design influence and the tongue-in-cheek freedom of reference seen in these six artists. At first I suspected the presence among the settlers of specific ethnic groups, the Swedes, Scots, Liverpudlians, etc, who were inspired to emigrate by the handful of missionaries who could be sent over. But then something richer and more resonant came to mind. This was the desperate condition of those ready to hear some message, not unlike the rabble of ancient Rome, fed on bread and circuses, who first responded to the Christian message. Imagine them and much of today’s Utah comes into focus: the love of family and distaste for strong drink, the independence alongside patriotism, and the absolute antipathy to poverty in spite of its spiritual reputation. The Cost of Anything may not include the landscapes and religious conventions seen in other local art shows, but it has more to say about that agrarian, hard-working, eternity-inflected people than the shows that do.

What, then, of those ephemeral costs? One of the show’s strengths lies in its reference to the impact on artists’ families: ”Sleep deprivation, loss of blood, blisters, loss of sodium (sweat), tears, a huge fight with my wife leading to much swearing and talk of divorce . . .“ reads one of Adam Larsen’s tags, to which might have been added a tag written by Amy, his most-patient of wives, and perhaps more by other family members. On that subject, what about his colleagues, who presumably must fill in for him in order to make the time for art? It’s not a criticism of The Cost of Anything to say it only scratches the surface. After all, what Thoreau wrote was, ”the amount of what I call life.“ These paper tags are the prologue to an artistic autobiography they are only beginning to draft.

The Cost of Anything, featuring work by Abe Kimball, Adam Larsen, Chris Purdie, Jason Lanegan, Madison Smith and Paul Woods, is at the Alice Gallery in Salt Lake City through July 10.

This article appeared in the June 2015 edition of 15 Bytes.